Round and round on a Random Byway

Saturday, 21st May: As the weather gets sunnier and warmer and dare I say it, Summer seem to be on its way – my cycling preferences change in two ways.  It becomes harder for me to go out cycling when the weather takes a small change for the worse.  A small amount of rain, cloud or wind has me thinking twice about going out. On the positive side with longer days of “sunlight”, currently  15 hours and 59 minutes I am also much more tempted to go out for longer cycle rides and to do a bit of exploring.  The two things are not unrelated though, If I have been for a longer cycle ride than I am much more likely to have a rest day and of course I will also have to catch up from bunking off.

The trouble is that when I have the inclination but not the time then I can sometimes find myself “umming and ahhing”  over where to ride to.  Sometimes I visit a place to see how it has changed as the seasons progress, sometimes I go somewhere for peace and quiet and sometimes I go to explore.

And so I found myself with a few spare hours on Saturday and with the Cambridge Guided Busway (CGB) closed I was wondering where to go.  In the end I headed out along NCN51 and then when I reached Swaffham Bulbeck turned off along the Swaffham Heath Road towards the byway alongside the A14.  I then found myself going round in circles, well almost, near Newmarket before heading out towards Soham and back via Lodes Way. Sometime you don't need to vary the route much, indeed sometimes just going round a route backwards can be quite a change. I have been known to get lost doing that because I missed a turn as it looked different.

Here is the route, it is around 66Km or just over 40 miles long, with a few bumpy byways thrown in for good measure.  Most of the route is either off-road or on country lanes.  Here is the Bike Route Toaster Link to the map. 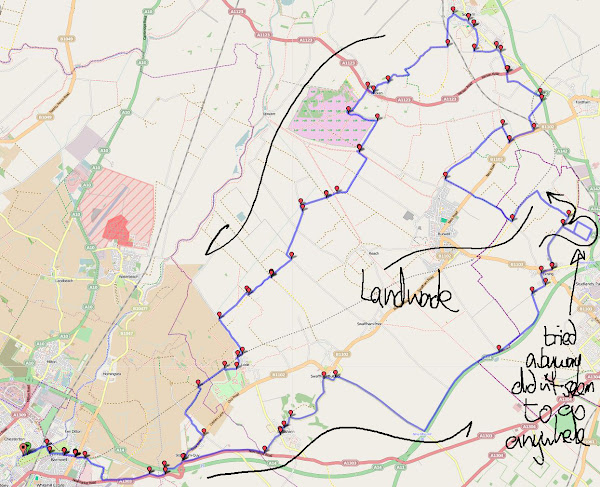 As we do seem to have had a fair bit of dry and warm weather it seems to have brought the flowers out early. So I can’t resist taking pictures of flowers when I am out and about, especially when there are solid blocks of colour.  Although it is not so common with modern farming methods you still occasionally see a wheat field with a whole heap of poppies competing for sun-time.  Nowadays you tend only to see blocks of poppies on recently disturbed land that has been left. Or in the case of the next picture along the margins of fields.

It turns out that a recent Daily Mail picture of poppies growing in a field is not so far from here in Rushmere St Andrew, Ipswich, it is certainly spectacular. Apparently the lupins are also early in Rogate, Sussex. Even the arctic landscape has bloomed.  Which reminds me there were also some beautiful Northern Lights pictures in the papers recently. That is on my list of things I would like to do – photograph the Northern Lights. 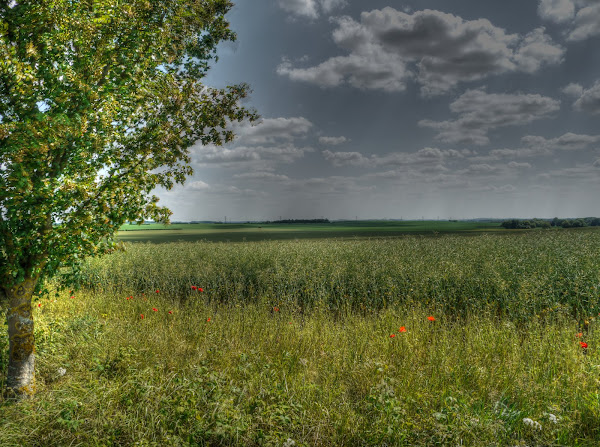 A few more poppies peeping through with the oilseed rape behind now no longer in flower with the seed pods formed. 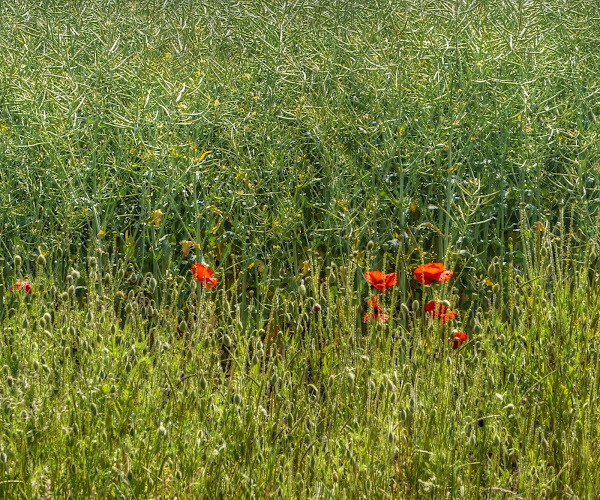 After I turned off the Heath Road to cycle along the byway alongside the A14 it looked as if I had cycled into a wardrobe. I would imagine that these were bags of clothes being donated for charity (as least that is what the donor though). Apparently in the UK we spend nearly £40billion each year on clothing with 80% of the total ending up in landfill (after use)! Although there is now a way of recycling used clothing much if it ends up being exported.  There are also Clothing Scam companies/gangs that have given the activity a bad name and serve to make the public (well me anyway) distrustful of all clothes collectors. An article in the Guardian suggested that the loss to genuine charities is of the order of £3m a year.

My guess is that these bags could well have been stolen and brought here for the perpetrators to rummage through and discard the unwanted items.  I think that one or two items were hung up as possibles. 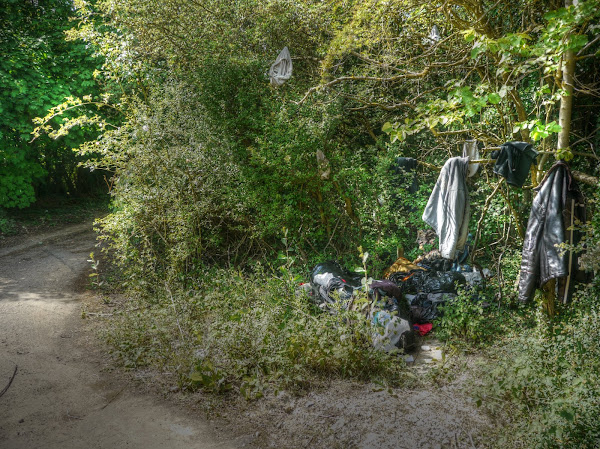 After re-joining the road (NCN51) near to Exning a kite flying in the field caught my eye.  I assume it was chosen for its threatening predatory shape as an effective crop scarer. Apparently one will protect 20 acres (well if they are of the “scare’m” variety). 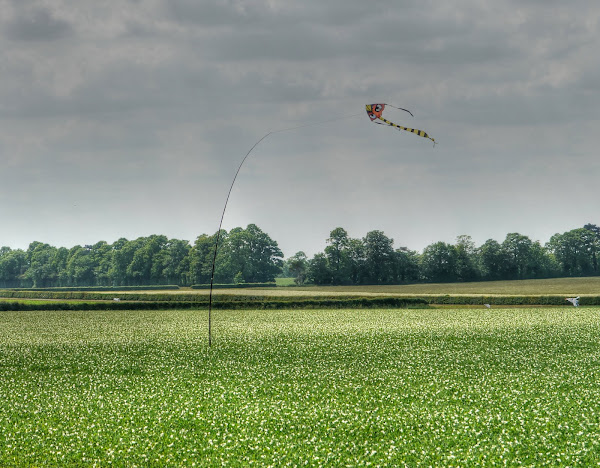 I know it doesn’t have quite the wow factor of a field of lupins or even oilseed rape, but I rather like seeing a field of flowers. In this case producing a speckled field. 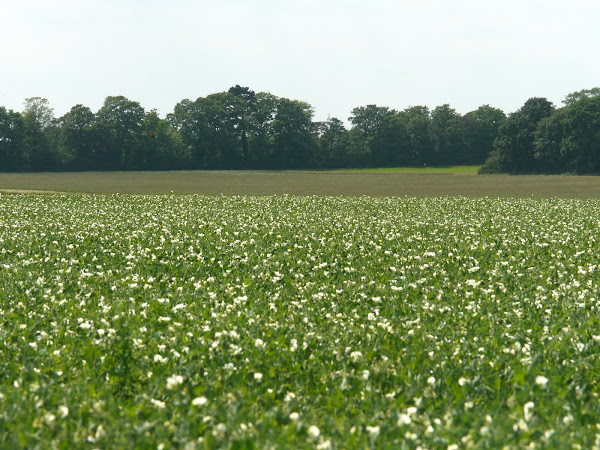 In case you were wondering here is a close-up of the flowers.  They are peas, although not quite like those we (well my wife) grow at home – these must be low-growing peas. Apparently Bird’s Eye in Lowestoft lost a supply deal last year which hit the farmers who supply them.  However a new supply deal for a different company was won later in the year which was good news for East Anglian peas and the plant used to process them at Oulton Broad. 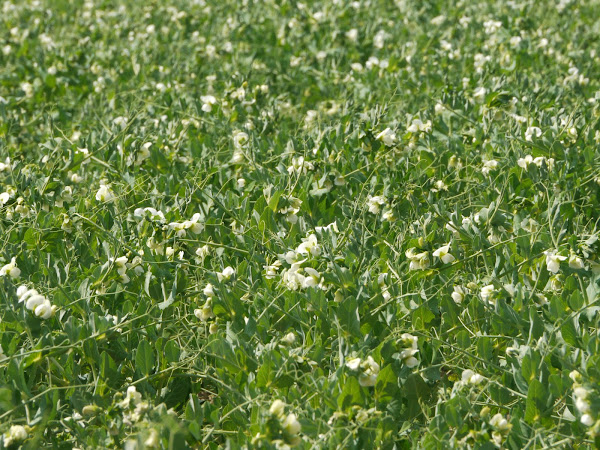 After cycling through Exning for a change I decided to cycle into Landwade and then back by paths through to Burwell. Whilst cycling along Cotton End Road towards Landwade  I noticed a “Restricted Byway” sign so I thought I would check it out. It turns out that it is a byway until just before it reaches the Fordham Road (A142) – not that I quite got that far. The restricted byway is rather nice and there will be a picture of it later.  The area also had a number of fields separated by encloses some rather nice fields in a grid of strips of woodland.  many of them now have crops in, but I would imagine they could well have been part of a stud-farm. 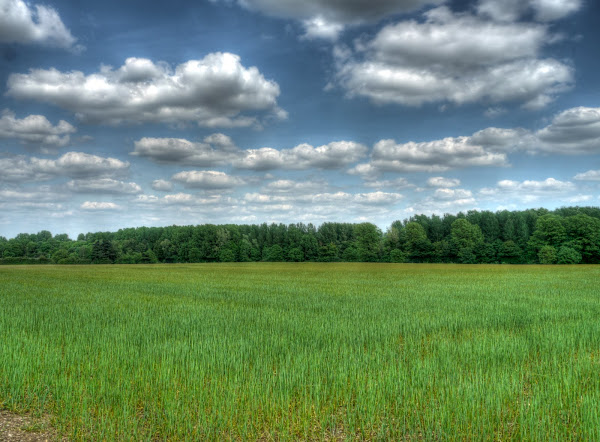 When I reached the end of the byway bit I had not realised that the byway ended and cycled along this likely looking path. Then I headed back down the the Cotton End Road thinking that perhaps this restricted byway was a circular horse-riding route of yore. I then reached a strip of wood that stopped me getting any further. Rather than turn back I then cycled along the outside of an enclosure within a field (used too keep horses way from the hedgerow?). 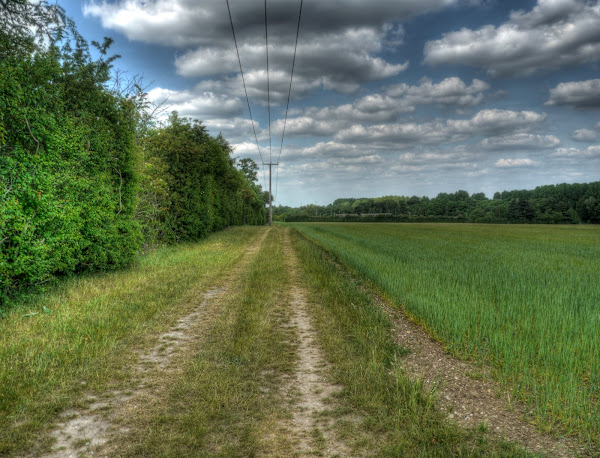 This brought me to a gate where I heaved my bike over and then clambered over it, carefully avoiding the barbed wire looped around the top bar of the gate. An odd practice – it doesn’t stop you (me) from clambering over it – I suppose it does send out the message that you aren’t suppose to.

I found myself back on the original restricted byway. This is the view looking back towards the Cotton End Road and for me the way back. I’d be very happy if all byways were like this one – rustic, but good solid tracks to cycle along. 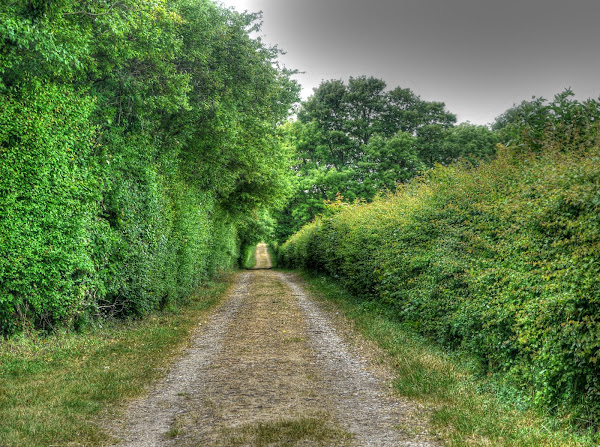 Another one of those enclosed fields. 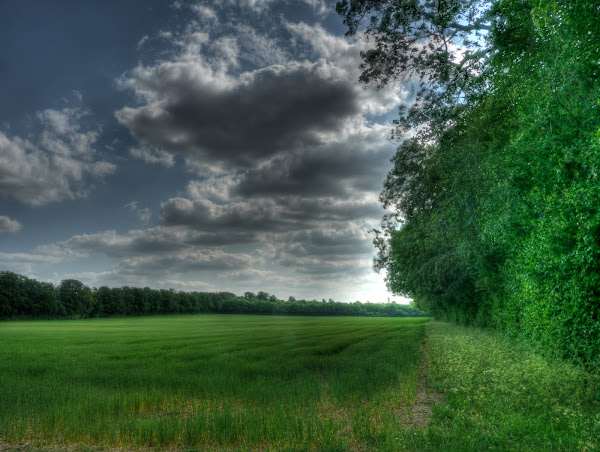 A bit further down signs of a bygone stud-farm. A set of stables past their best. When this was in use it must have been a rather nice secluded but not isolated stud-farm. 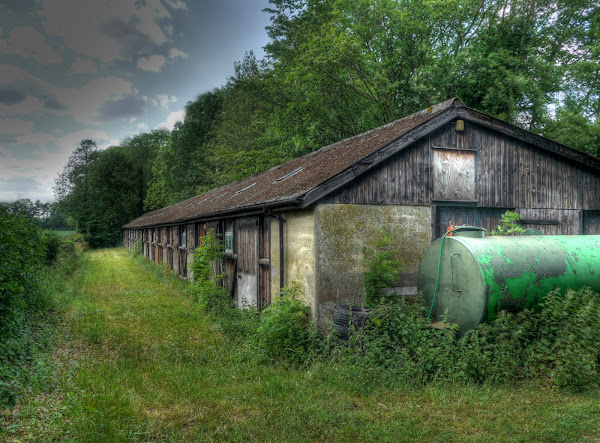 After that brief excursion I returned to plan A and turned down Landwade Road. It is amazing how the trees give the countryside such a different feel compared with the wide open fen land. This is a field alongside Landwade Hall – I didn’t notice the bent bumpy road sign though.  I took the picture from the gate you can see in the Streetview picture.  There is a horse in the stable in the middle of the field. The parkland around the hall was planted in 1848 to 1851 with oaks and chestnuts. 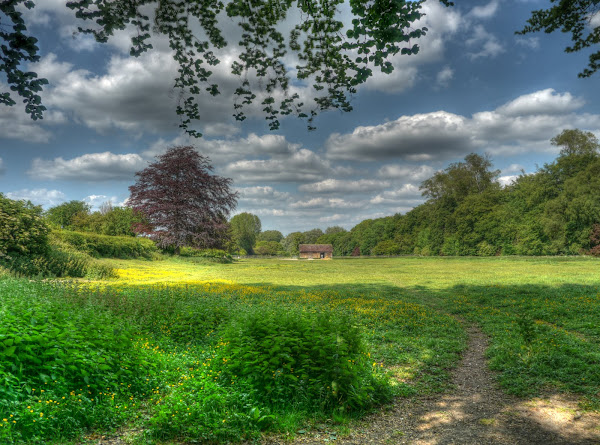 The road ends soon after passing the hall and then there is a bridleway through to Haycroft Lane (the byway to Burwell). (On the other side of the hedge was the route of the railway line from Cambridge to Mildenhall). After crossing the Ness Road (B1102) – which can get quite busy the byway continues but as Howlem Balk, which in this context I think is a ridge of land left unploughed as a dividing line.  In the field alongside despite the lack of rain the crops were looking quite lush. 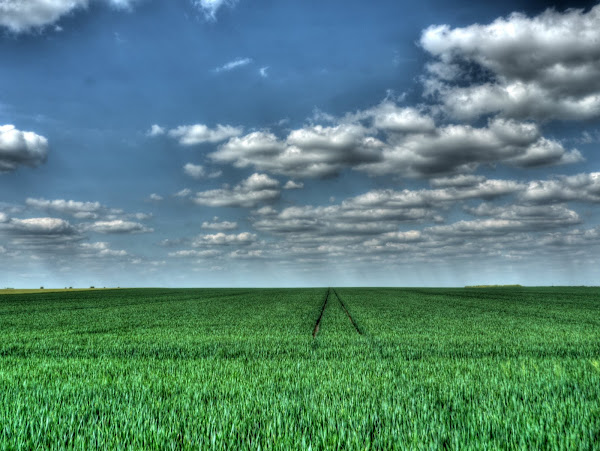 I then headed down Broads Road past Broad Farm at the end and onto the solid and heavily ridged byway  through to the Ness Road. It passes between Ness Farm and Tollgate Farm. The track is quite good fun when it is dry – but can be pretty awful when wet and muddy.

I then found my way to Soham (along Cockroft Lane, Larkhall Road and an unnamed byway.) Then in Soham I headed for Mill Drove and the “back way” to Wicken Fen along a byway, bridleway and then finally another byway.   The first byway is Bracks Drove – where there is a table conveniently placed should you wish to stop and partake of refreshments. The final byway is Drove lane (a track) which passes a pumping station and  then turns onto Drury Lane.

I should mention that these byways can be awful  when there has been a lot of rain – the mud gets very sticky. 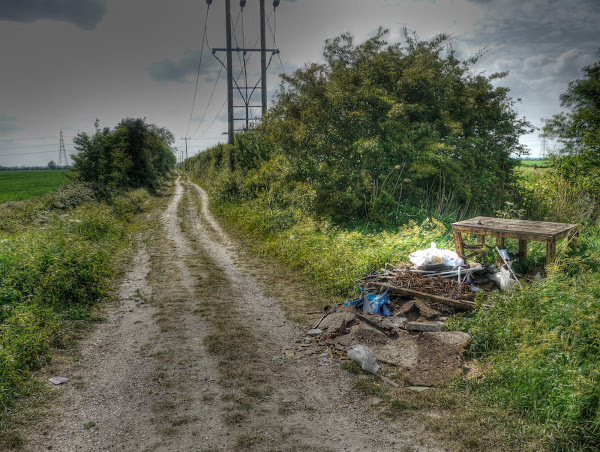 It was then time to head for home along Lodes Way. There is definitely something to be said for well signed coherent cycle routes – they can make life so much easier. It is a pity that Lodes Way des not have a more direct route into Cambridge.  At the Newnham Drove cattle grid complex you might notice that the cycle count detector has had some problems. Apparently the cows routed up the wire as they made their great escape. So it has been coiled and hung to one side next to the box to keep it safe. 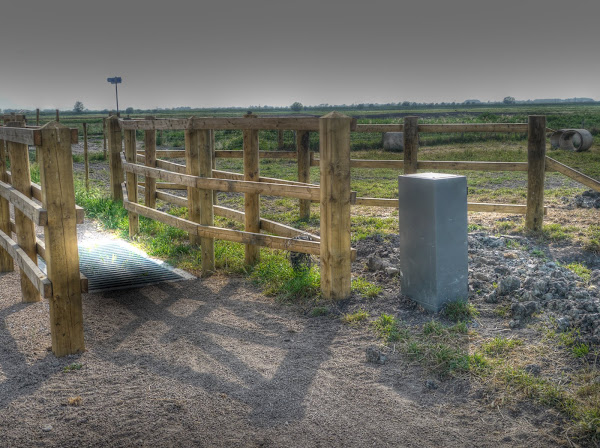 I did take yet another picture of the clay pit in Burwell Fen. This was a single picture, taken by standing on the fence next to the Sustrans sign in the picture, in order to get a higher viewpoint. It worked, in that I got the whole of the pit into one picture, but the vantage point was still not really high enough to give a sense of scale. 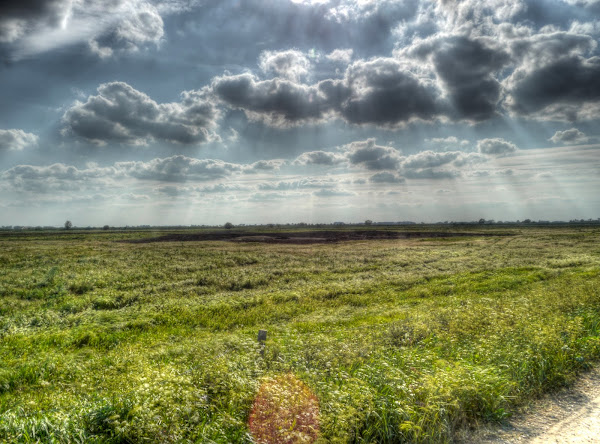 As you can see it was quite a nice, day with the sun shining through the clouds. It was breezy on the way home though.