Saturday, 19th November:  This is part 2 – of my ride to St Ives and back. There are some issues with posting from the Windows Live writer client at the moment so I hope that this is working.

To cut a long story short the cycleway alongside the CGB (Cambridge Guided Busway) is pretty much complete all the way from Milton Road to St Ives Park and Ride. It is track that is just under 20Km / 12miles in length and uninterrupted interrupted by only six sets of traffic lights along its length. There are still some track works taking place on the section between Swavesey and St Ives, up near St Ives where a Dutch Culvert has been built.

So it is not yet open – but people do seem to use it at the weekend.

Here is the Bike Route Toaster Link to the map below, 52Km/32.5 miles in length. I’ve split the Post into two and the next one will cover the route back along the CGB so you’ll have to wait until I write it to see some pictures of the tarmac.

As it gets dark much earlier in the evenings I headed out a little earlier, from the link you can see that sunset is at 16:03 on the 19th November. I like cycling in the dark – as long as there aren’t too many homicidal drivers around and it isn’t wet, but I did hope to get some pictures of the current state of affairs on the missing link. 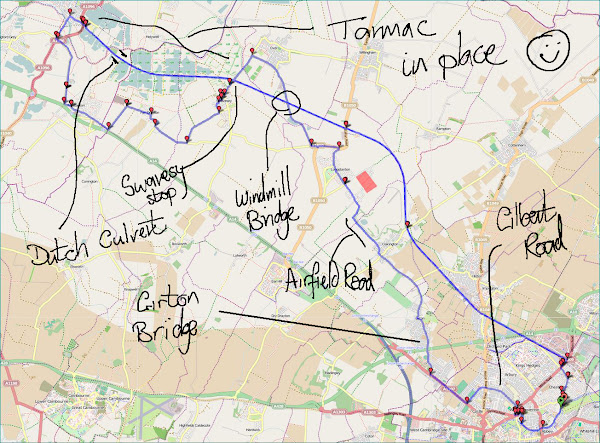 To cut a long story short there is now tarmac along the entire length of the cycle way alongside the Cambridge Guided Busway (CGB). This is some of that new tarmac – with extra grit rolled into it. I happened on this website (Swavesey Bridleways) for horse riders and they would seem to have been treated with courtesy by the buses – it makes a change to see so many positive comments.

They also mention a new bridleway around Westwick – here is a link to a map, I must look out for it the next time I cycle through.

I found the previous links through the Swavesey village website, which also has some interesting insights into the Fen Drayton crossing and the limited visibility that car drivers have because of the location of the fence posts. Because of the size of the pillars each side of a car’s windscreen there can be significant blind spots for motorists – one of the reasons for SMIDSYs I guess. (The pillars used to be thinner to assist the driver’s view of the road, particular when at a T-junction, these pillars have gotten bigger to make the cars safer for the occupants, but not for cyclists and motor-cyclists.

So be careful when tanking up the cycleway on your bike – although you don’t see many cars I have seen vehicles crossing at that spot a few times.

Whilst talking about Swavesey, their current front page on their website mentions the thefts of bikes from the Swavesey CGB stop (28th October). It was locked so I would imagine there will be some concern along the length of the CGB about how secure bicycles are. I wonder if the security cameras will be of any help. I would imagine they will be focused on either potential crossing problems or the ticket machines. I must have a look the next time I am along there. 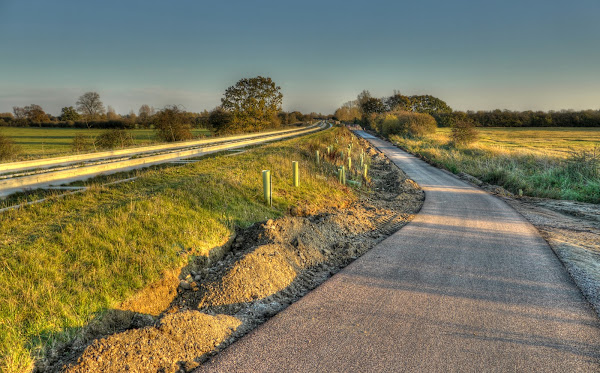 The only unfinished bit of the works on the cycleway seems to be around the Dutch culvert, as far as I can tell. It is not yet open though, so don’t rely on it being open until they say so officially.

The culvert raises the height of the cycleway to allow for the pipes underneath and just in case cyclists take this ramp to fast and shoot of into the sky they have painted some “SLOW” signs on the tarmac. The surface over the culvert is ridged concrete and it looks as if there will be some railings as there are studs sticking up on the left hand edge. At the moment there are wooden boards in the surface – speed bumps? 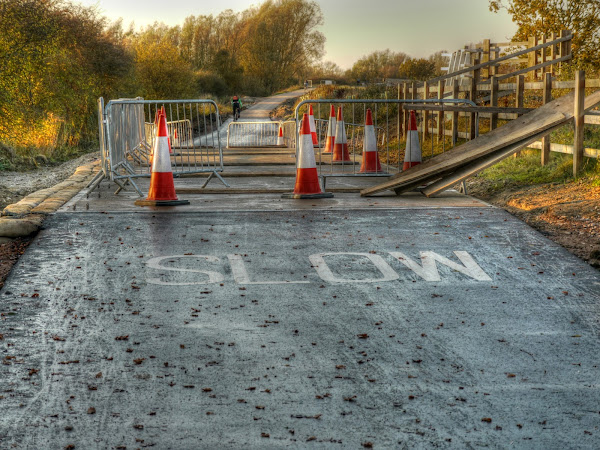 One of the great things about the cycleway is that despite the buses it feels as if you are getting out into the countryside. The buses are nowhere near as noisy as I feared either, in fact I have to remind myself to be aware of them, particularly when the cycleway changes sides at various road crossings.

But you do pass through some rather nice countryside, including the Fen Drayton Reserve. Even though I set out fairly early, my less than stellar pace meant the sun was setting over the Lakes on my way back. I guess that the spire you can just about see is Fen Drayton – St Mary’s. 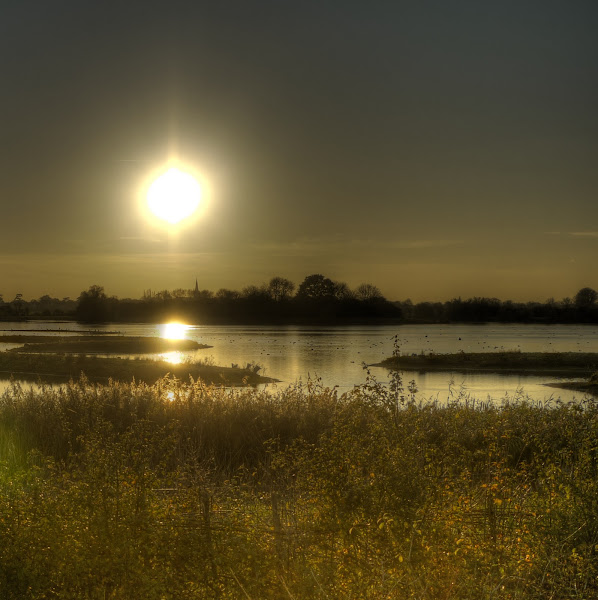 The same picture, but not cropped and not processed. 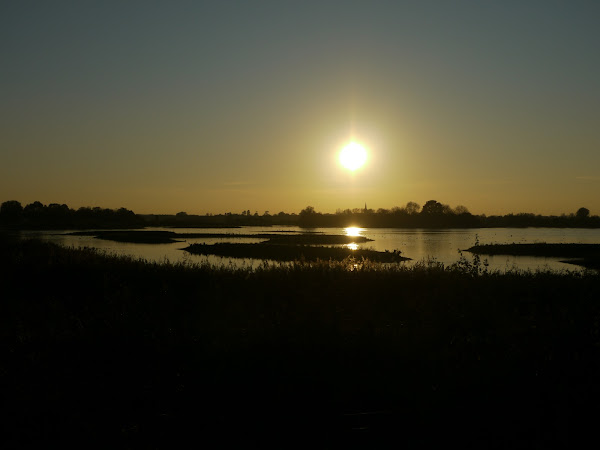 I was surprised just how many cyclists I saw out, which is why I counted them, however we are put to shame by the number of bikes counted on a daily basis in David Hembrow’s  post on Counting bikes in Groningen. (He mentions a count of over 19,000 cyclists on their busiest street!) 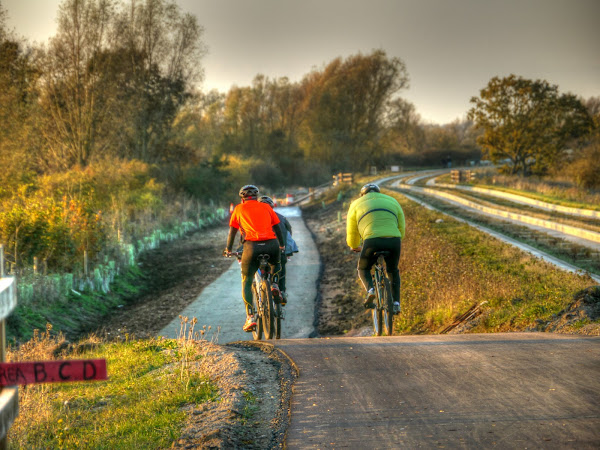 A picture looking the other way and using the fence as a “tripod”. You can see how low the sun is by the shadows cast, however it is still plenty bright enough for cycling. 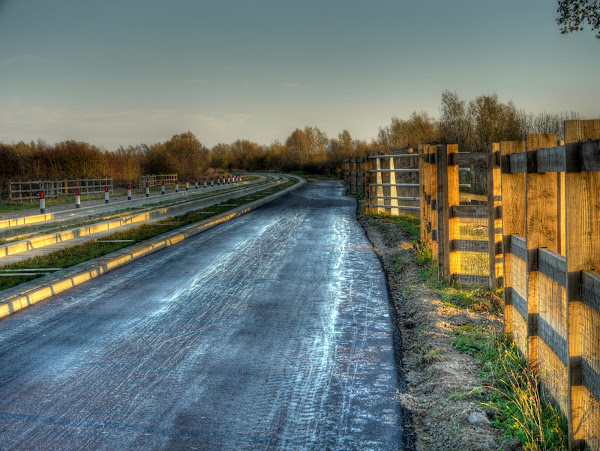 It is good to see that the even on a Saturday the cycle “sheds” are getting good use. The stands seem to be somewhat further apart than down in Cambridge Railway Station. Apparently despite the recent scare the plans are still going ahead for better cycle parking! I’ll believe it when I see it. I reckon that all the cyclists who have cars should get up really early one day and use the car park. Apparently there are 435 car parking spaces, although I am not sure how they are shared between reserved spaces and turn up and park spaces.

You’d then get a load of disgruntled motorists unable to park who would also start seeing the benefit of better facilities for cyclists. The facts are that cyclists take up less space on roads and in car parks than cars, so cyclists actually are doing the motorists a favour. 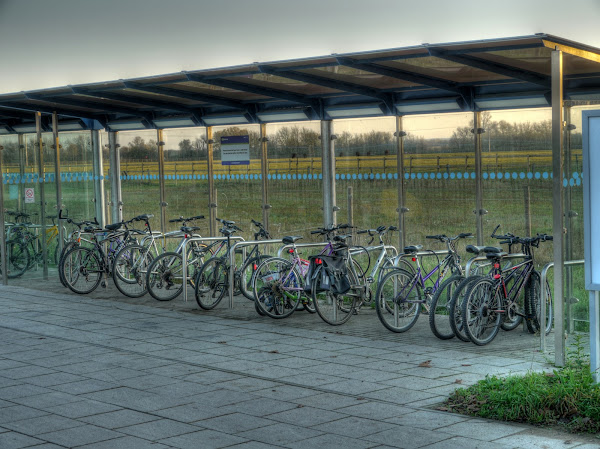 Another of those little walls being built along the edge of the cycleway? 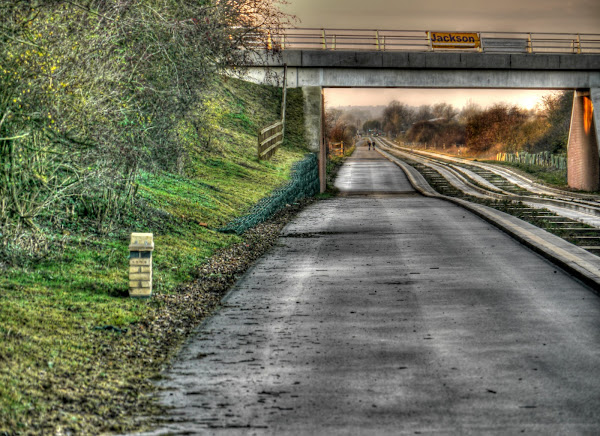 A bus happened to come along as I was taking the last picture so here is a gratuitous bus picture.  It seemed to me that there were more buses running than I would normally see on a Sunday – but I’ve not actually looked at the timetables. A recent Post by “Travelling the Cambridgeshire guided Busway” mentioned the A14 improvements. With a comment from Jonathan Djanogly – MP. He was quoted in a Hunts Post article as saying the CGB was “hardly going to make a pin-prick” in reducing traffic volume on the A14” and he also said “an expert once told me that if every private car using the A14 between Huntingdon and Cambridge were to go on public transport, traffic would reduce by only some five per cent.”

I presume that this means that there is a lot of through private traffic that just happens to be passing by and of course a lot of freight traffic. Certainly the CGB could take more traffic, but of course there have to be ways of getting people to the bus stops.

The article also details some of the accident statistics – in 2010 the A14 accounted for 7.5% of all fatal and serious accidents in Cambridgeshire. Just last night  a cyclist was found by the side of the A14 near Bar Hill with serious injuries. I used to live in Willingham and have cycled along the A14 a few times, but it is not a road I would cycle along nowadays. 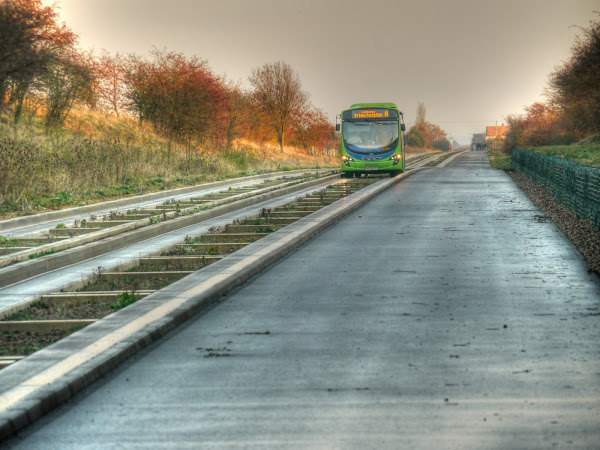 A few more pictures of the sun setting across the fields. It is a bit early for people commuting at this time of year – but a fair number of people using the CGB bus for shopping in Cambridge got a good view. 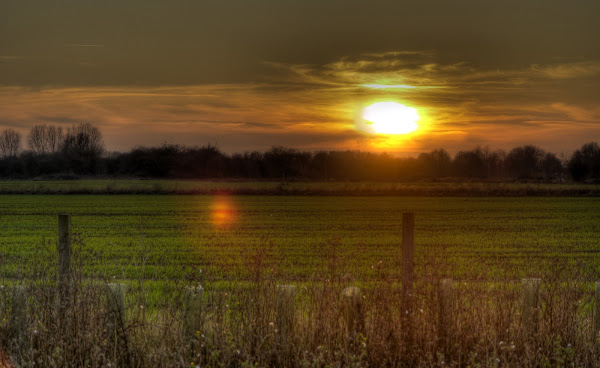 The same picture but without the HDR processing. Neither picture is quite what the eye sees.

It always seems to happen there are no buses at all and then three come along at once. Although one is heading into the city – which makes you fat and depressed… The other thing that caught me eye is how close together the two buses were, somewhat clsoer than 500m. 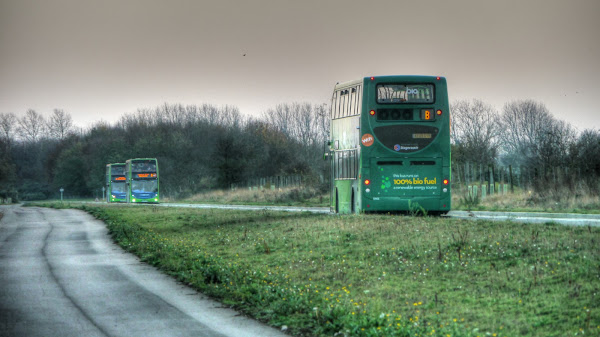 I hadn’t actually stopped to take the bus pictures, so here is another picture of the sun setting behind some trees, off in the distance. 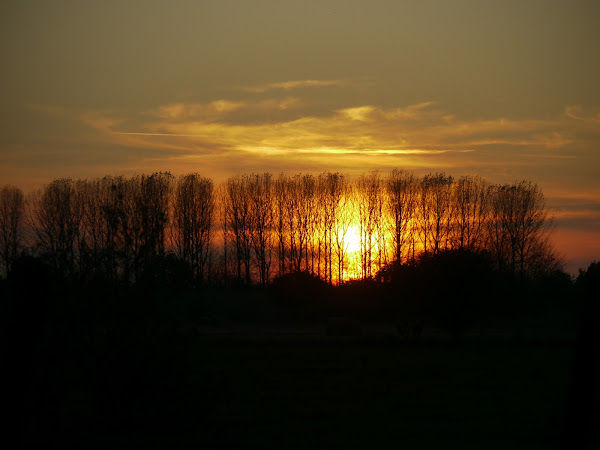 As you can see the buses separated after a short while. They had both crossed a road just out of sight down the track and I would imagine that was why they got bunched up. They might also have been wondering why I was taking their pictures as well. 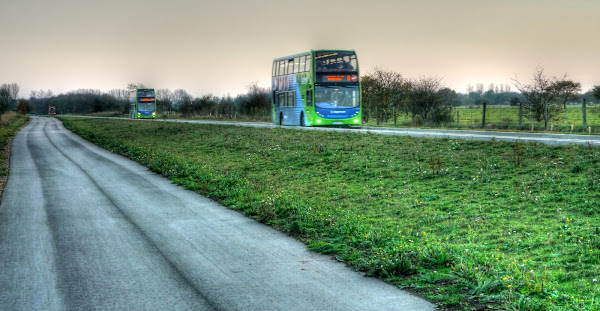 One of the “artworks” on the waiting area at Oakington I think. It says “Water loves its own way” and is I believe by Catrin Jones. 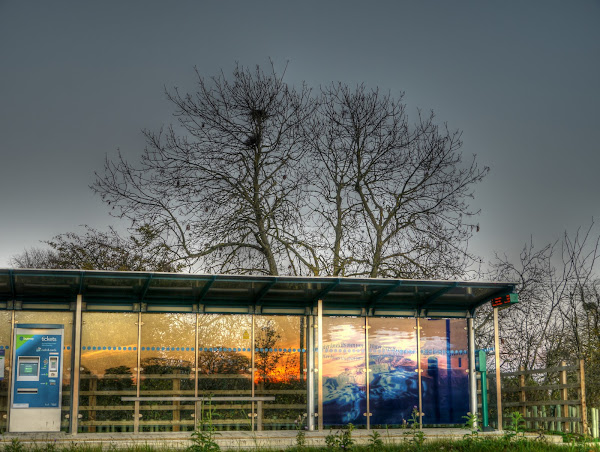 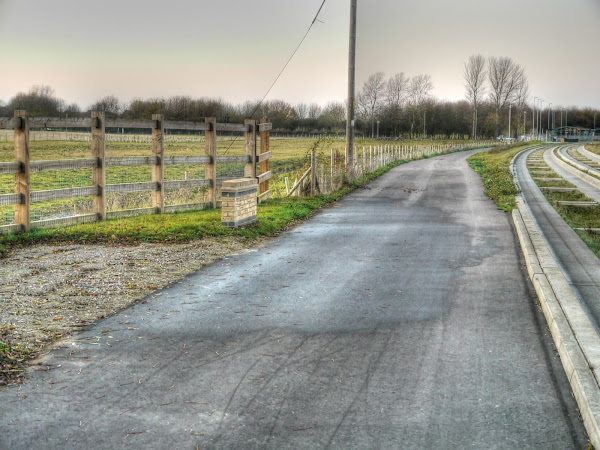 A horse rider heading off along a bridleway that runs parallel to the CGB from Histon to Westwick, I wonder if they will use the new bridleway around the back of Westwick and then head back down Gun’s Lane 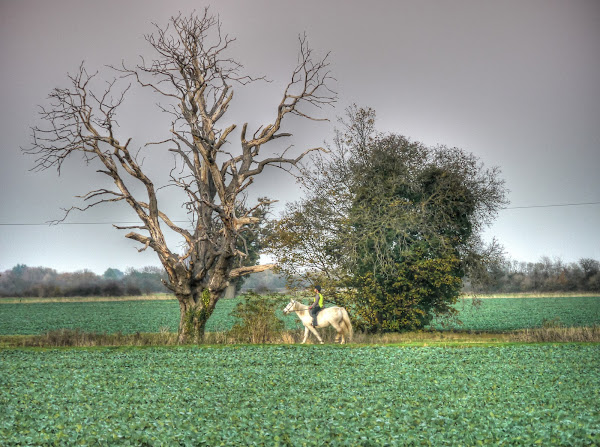 Despite it being near the end of November there was some Lacy Phacelia growing alongside the concrete tracks.  It is often grown by farmers as a cover crop to encourage bees. (If you want to know more about cover crops click the link.) Here is a link to a previous post where I passed some Lacy Phacelia cycling up to Ely, fourth picture down. (I was doing the cycling not the Lacy Phacelia though!) 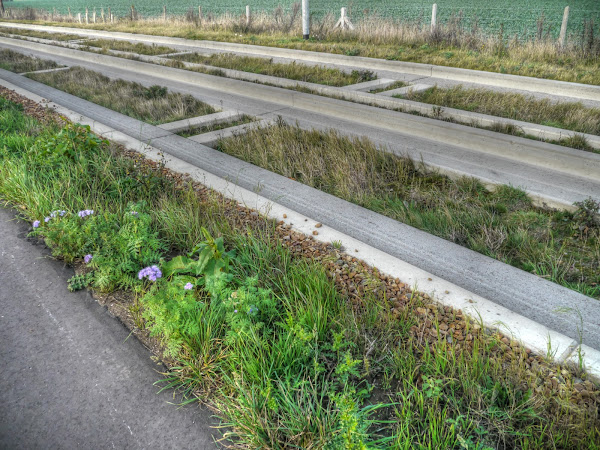 And finally another of those pictures of celebrities on cycles – this time Christine Bleakley. (Let’s hope this gets published – well it still reports an error, but has appeared!)