Friday, 2nd November: At long last the Cambridge greys have gone away it was a bright and sunny day, with blue skies. So it would have been rude not to get out and about on my bike, especially as it was POET’s day.

The only trouble is with all the rain and flooding around the country  we have been having recently sunny skies seem a distant memory.  Fortunately the Cambridge area doesn’t seem to have had it as bad as some places. However as you might expect the Cycle way alongside the Cambridge Guided Busway has become impassable. – Travelling on the Guided Busway: Flooding on the busway (26th November) 2012, they also have pictures of the track damage (and patch up) caused when the bus failed to enter the busway properly and crashed. (The alternate route from St Ives around the flooded area of the Cycle way was also flooding as well, Low Road was partially blocked and noted by JamesBarlow300 in a comment on this blog. I wonder if anyone is keeping track of the number f days the Cycleway has been flooded this year.

The other problem is it was so long ago that I seem to have forgotten where some of the pictures were taken so I have had to check out my Garmin GPS log to refresh my memory – oh the pleasures of ageing eh.

Basically this is a loop around Wicken Fen, using bits of the Lodes Way and some of the other tracks that exist in the general area. After cycling down White Fen Drove/ Sandy Road to White Fen I cycle left up the track before heading back to White Fen. (Note I still can’t drag the OSM map around in the Chrome browser. Whilst it might be an issue with Chrome I can’t find an easy way to report if to the OSM community. The accuracy of the map has increased with the addition of buildings at least in this area.

I took this picture because the trees were looking bare – autumn is well and truly upon us. 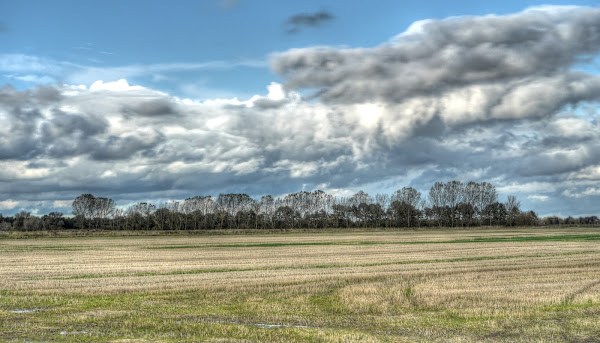 After crossing Swaffham Bulbeck Lode I was struck by just how much Spindle there was growing in the hedgerow  (Spindle (Euonymus europaeus)) and how many berries there were. It was first pointed out to me by the Swaffham Bulbeck Cyclist and although it is not that widespread there seems to be more of it about this year. Or perhaps I am getting better at spotting the pink berries. 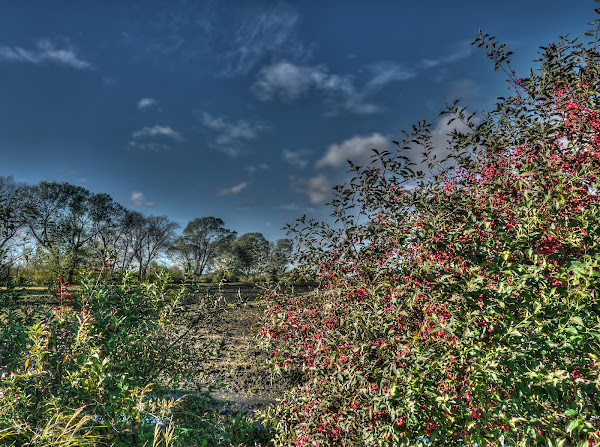 Here is the road and there are several Spindle bushes along it. 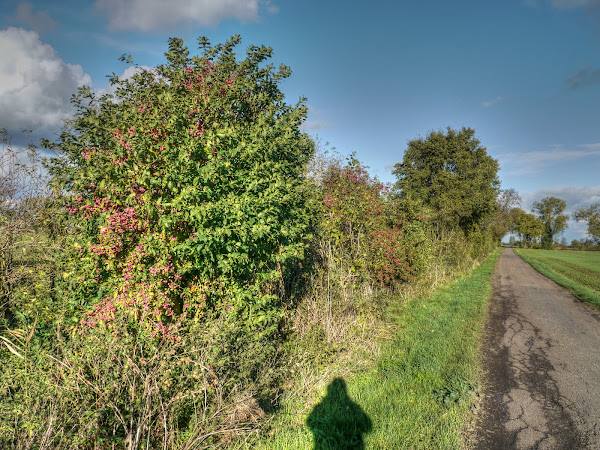 The field also seems to be coming along nicely. Although my Son tells me that the farmers have been finding the newly drilled fields a bit patch in places. It is a combination of the rain and the seed quality. 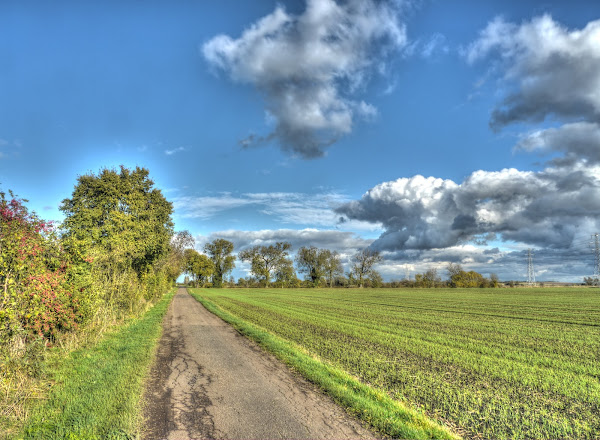 At the end of the lane as it met Whiteway Drove there was a peacock (a male peafowl) in the verge. 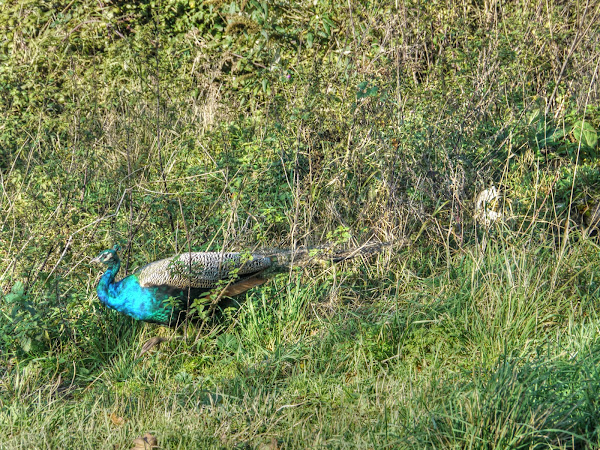 As I write this the detour around the new bridge footings works on Burwell Lode has been shortened and a gravel track put in over the last bit. Here are some rather good drawings and plans on John’s Blog (Wicken Fen Vision Warden) – An update on Burwell Lode Bridge showing what is planned. It is going to be a people and animal bridge to allow the Wicken Fen ponies and cattle to roam more freely.

This is the banking that you had to detour along. That grass is quite soft, as is the peat soil on the bank and it made for very tiring cycling.

Burwell Lode banking – scene of the detour (but no longer) 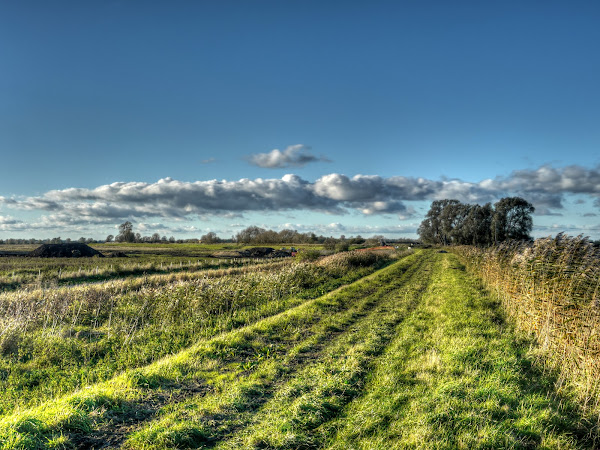 And if you can’t be bothered to look at the plans here is one of the nearby signs explaining what is happening. 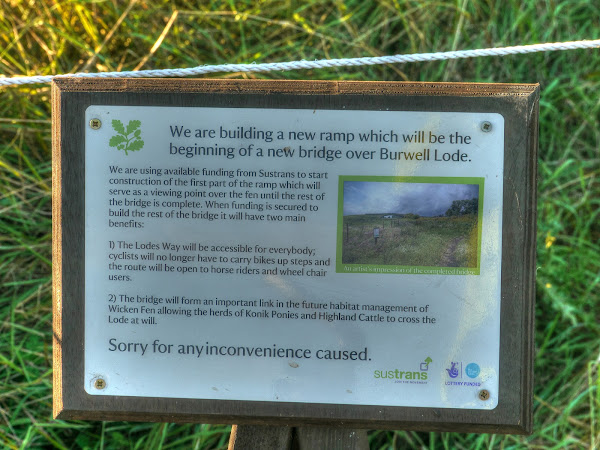 Talking about Lodes – here is a piece written by someone who dwells on the river – “Living off grid”. It discusses the challenges of living without mains electricity. It is a reminder of just how blinkered we have become to the use of electricity. As I sit here tapping away on my computer my cycle light is recharging, along with my MP3 player. The lights are blinking on my router. I sometimes moan about how we burn money driving our cars around. It is a timely reminder of how we burn money for our convenience (and safety) without a moment’s thought’ The article reminded me of my cycle ride through Cambodia where in the remote areas it was usual to see a small generator running to charge up 10 or 20 car batteries which then provided energy in the evening for small TVs or lights or radios.

Here is some riverside housing in Cambodia – not at all unusual we cycled past many villages that looked similar to this one. 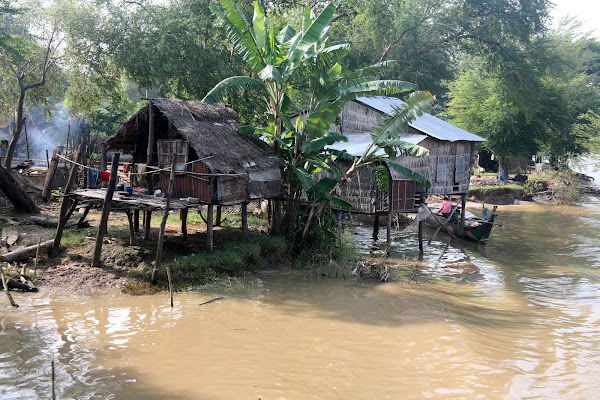 And this sight was not at all uncommon –  a generator charging the a bunch of lead-acid batteries.

Electricity in the villages – Cambodian Style 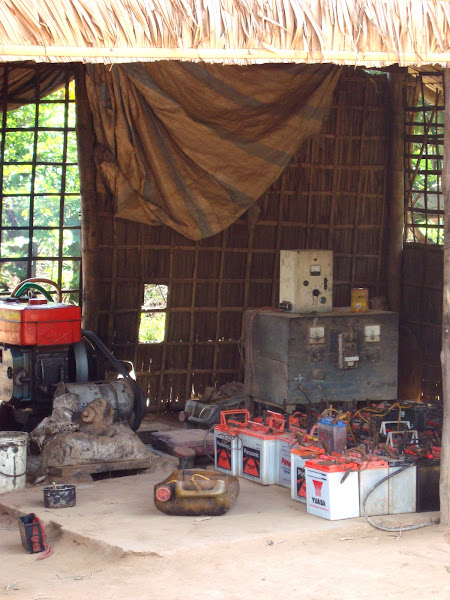 We have a more centralised supply of electrickery in the UK. Which utilises an electricity transmission network with lines of pylons running around the countryside. A countryside that is under pressure to supply homes for people to live (1,500 homes on the outskirts of Cambridge) and Northstowe (which needs a multi-million pound boost). Although how much demand is there if it needs a boost.

Of course all this requires more roads and infrastructure (well the way we live our lives at the moment – A11 development plans exhibited in Elveden). Apparently “Living near a busy road may double the risk of autism, researchers warn”. Is is remarkable that there is a general unease about say Nuclear power Stations yet we tolerate the invisible pollution that comes from motor vehicles.

Not to forget sources of sustainable power like Wind Farms (£12n wind farm with nine giant turbines will light Bronte country) and of course for food. As energy costs increase so does the cost of transporting food from country to country.  I do think we need a greater focus on sustainable energy – if only to deal with the strategic uncertainty of getting energy from overseas. So do the Tories apparently – although I might find Tim Yeo’s position more reasonable if he wasn’t getting paid for advising green energy firms.

And last but not least we have the wildlife – 44m nesting birds ‘lost since 1966’ and RSPB investigates the mysterious deaths of thousands of migrating birds lost as sea.

Don’t get me wrong I like my gadgets as well as anyone – I don’t really need a GPS with me when I go out cycling or an MP3 player for that matter. But we do have some choices to make, the trouble is who has got the plan. At the moment we just seem to have various groups clamouring for attention – build more homes, don’t built in the green belt. don’t build on flood plains, more sustainability.

Pylons Marching across the Cambridgeshire Countryside 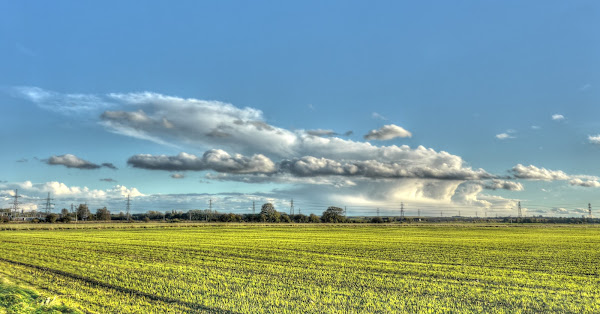 To some extent we rely on Science to sort things out – but given the seeming ignorance about what is and isn’t possible I do wonder sometimes if we are stumbling on with more hope than judgement.

Meanwhile for some it is business as usual – whilst the yields of the winter crops might be patchy this field looks pretty good and very neatly drilled. 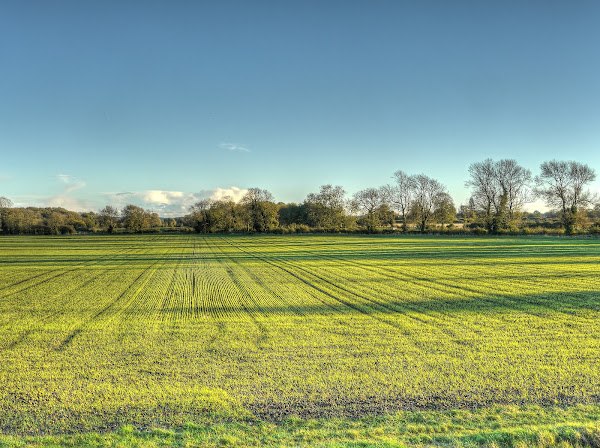 And finally I listen to a podcast – The Naked Scientists currently broadcast by the BBC at a cost of next to nothing. The trouble is the BBC seems so hung up on its introspection that it wants to axe the program from January – so it needs your help.  Campaign launched to save The Naked Scientists. If we are going to rely on science to save us then lets save science.

I can’t resist mentioning this item – “On your bike! Children driven to school are slower learners than those who walk or cycle”. So Mum and Dad thank you for making me cycle to school in all weathers and for the times I had to sit with soaking wet trousers – it was  worth it in the end. Although it is not clear that the cause and effect has been proven. It might just be that enlightened parents also encouraged more learning.

And finally pictures – a frozen wave – 50ft tall.  Why does the DM still use feet and inches I wonder.