A favourite saying of mine, when involved in corporate operational life is: "what gets measured gets done". This is a maxim I have applied to my cycling. I have kept records of pretty much all of my cycling since 1994 (1400Km) to 2008. Including two years; 2000 and 2001 when I failed to cycle at all (Knee problems and laziness). I know this makes me a bit of a geek but I do find this gives me the impetus to cycle regularly. If I stop cycling for more than a week I get out of the habit. Because of vacation and work commitments August was a bad month for me - I managed around 150Km for the whole month. 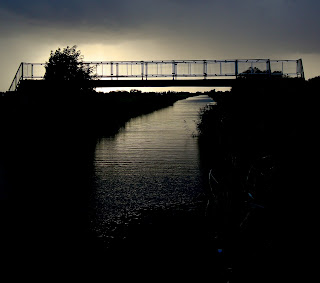 on my bike for all but three days during September (total 1583Km). I tend to take a similar route most of the time, one that takes me over "off-road" cycle routes through the Fens rather than along smooth tarmac. This is to help me acclimatise to the sorts of tracks I will be cycling on for the "B to S" ride. The main downside has been higher than average the number of punctures - 9 in a month compared with an usual total for the year of 4.
I have become pretty good at patching

inner tubes without removing wheels. I have since replaced the tyres I usually use (Michelin Krylion Carbon with Schwalbe Marathon Plus) and the punctures are back down to normal levels, although the grip from the tyres is not as good and they are much heavier! It beats fixing a puncture in the rain though

On the whole the

weather has been pretty reasonable, although there have been some downpours along with the sunny spells on occasion resulting in some spectacular double and triple rainbows. This picture shows one such rainbow over some newly ploughed fields. If you look closely you can see the join in the middle as it was formed from two pictures using Photoshop Elements.

Welcome to those who have received an email from me

When seeking sponsorship for "conventional" English charities there are convenient websites that act as a single point of contact; allow different ways of donating money, send email responses and conveniently keep track of the total sponsorship being raised. However on this trip the four charities selected by the organisation running the event (Symbiosis Travel) do not have a single convenient point of contact. So in my emails I have left it up to the recipient as to which of the four charities they might wish to support - indeed I do understand that many of you will probably be reluctant to take such an approach - sending money via the Internet can be a problem. However as the time draws closer to the start of the Cycle ride I find myself running out of time. So please forgive me for taking the easy way out.

Over the next few days I will talk about my preparations for the event.
Posted by Jme at 11:34 PM 2 comments:

Welcome to my blog - in November I will be cycling from Bangkok to Saigon with Symbiosis Travel. At the moment I am trying to sort out the loose ends - bookings flights, getting inoculations, arranging travel visas and working out ways to allow potential sponsors to support the four charities supported by the challenge. Not easy as they do not fit easily into the convenient Internet world of charitable donations.

Because I will be cycling in a part of the world where malaria is present one of the choices I have had to make is type of anti-malaria medication. I have selected the more expensive version, because the side effects of the other choice, suitable for the areas I will be cycling through includes "genital itching" and "sun sensitivity". They also require the recipient to remain upright for at least 30minutes to avoid heartburn. All of these would seem to be best avoided when cycling.