Thursday, 2nd May 2013: Despite the cow stampede adventures of yesterday I still used the NCN51 route out of town and Newmarket Road route as a circular route to my evening meeting in the centre of Cambridge.

Once again it was a glorious day, just right for cycling with working togs on.  The winds were light, the sun was shining and the temperature was moderate.  So I felt able to cycle a few extra kilometres.

Although before I start, did you know that “Carbon dioxide passes symbolic mark”. Yes not the most informative headline – what the BBC News website reports is that daily measurements of CO2 have topped 400 parts per million for the first time.  Well in three to five million years. Why does it matter – well CO2 is a greenhouse gas and absorbs the sun’s energy. One of the major emissions sectors is transport – with road transport being the largest contributor. Yet we love our cars – how can that be…

The rise in CO2 is one of the reasons that we should be making it easier and more pleasant to switch from driving to cycling I reckon. It would seem that some business leaders don’t really look that far ahead. Mind you after the banking crisis I don’t have much faith in some of our business tea-leaf readers.

What sort of encouragement? – Well here in Cambridgeshire, where quite a lot of people cycle relative to other parts of the UK, the implication is that cycling is only for short journeys. Consequently there is little thought given to making longer journeys by bicycle easier and so it becomes a self-fulfilling prophesy.

Cycling into Cambridge from some of the “necklace villages” can be a nightmare. So I am pleased to see that the A10 Corridor Cycling Campaign is gaining momentum with a protest ride set for Sunday, May 19th. Don’t read the comments though – as my son says you  begin to despair about humanity when you read comments on some news stories.  Note bike week is coming – 15-23 June.  Talking about campaign groups and limited cycling routes to surround necklace cities – (Ely) the Ely Cycling Campaign also seems to be gaining good momentum.

It is good to see that some of our MPs still cycle, Andrew Mitchell demonstrating that you can cycle and be smart (ish) at the same time.  Another MP went to the rescue of a cycling damsel in distress.  Also the wheel has been re-invented. It will be interesting to see how it compares to both conventional bikes (without suspension) and bikes with suspension.

One thing that is both fun and a headache is tech stuff. You really can have too many gadgets. Some might say one is too many.  Well I am very, very pleased with my home specified and home built computer.  In fact I am so pleased I have just been getting on with doing stuff and haven’t really spent much time systematically checking everything out.

What I did you after a couple of weeks is notice that my RAM wasn’t running at the speed I had bought it for. A quick tweak using the ASUS tools and every thing runs faster – well perhaps not my typing. I haven’t gotten around to over-clocking it yet – although the CPU seems to run pretty cool.

Apparently Windows 8 is like Marmite, you either love it or hate it. Well love might be a bit too strong a feeling for an OS but I find it very good. The interfaces are fine, it is fast and drivers and stuff all seem to get loaded with less fuss that ever. We humans are pretty conservative we don’t like change – well even an old fart like me can adapt and it works. My re-boot times are fast. Apparently there are changes afoot though – lets hope they don’t take too much of a step backwards.

The other bit of tech I like, but am having problems with is my Garmin Edge 605 GPS. I noticed that it was failing to show up the microSd card that is plugged into it – when connected to my computer. Then on this ride not long after cycling over the super bumpy wooden bridge with extra plastic ridges, between Stourbridge Common and Ditton Meadows, I noticed that it had switched itself off. I reckon that there is so much vibration when you cycle over the bridge that it shakes everything apart. I have also noticed my front mudguard has cracked. Thanks a bunch Cambridgeshire County Council, or whoever actually added those plastic strips. On what evidence was the addition made – or was it some whim.

There are standards for road design and layout that have legal implications – it seems that the authorities can do any old thing on cycle routes. I really ought to write and complain.

After-restarting my GPS is seemed to work but did turn off again. When I got home the routes were recorded, apart from the gaps, so it hadn’t corrupted the data. I took the microSd card out and that  seems to have done the trick. The plastic ridges were too much for the microdSD slot and that seems to have caused the GPS’ computer to crash.

Still whilst the GPS was re-starting I took a picture of the field that was being scanned and drilled yesterday – no-one around this evening – no bombs then. 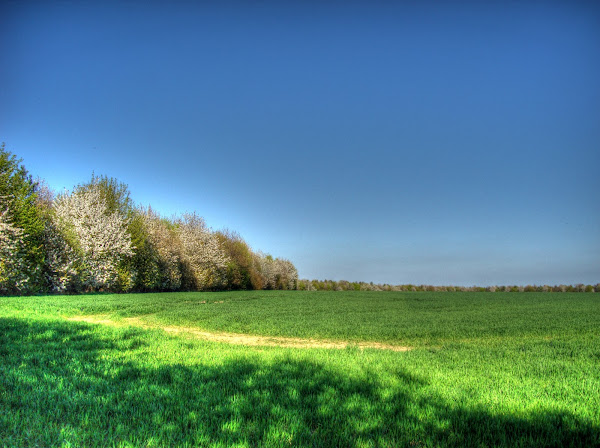 I ambled around a bit taking routes I might not normally cycle along. Partly because in the evening there is less traffic and partly for a change.

As I cycled down Downing Street to Pembroke Street I noticed a car heading down towards Trumpington Street. At first all my brain would register is something is wrong here. It took me a while to think that he is driving the wrong way down Pembroke Street – in the cycle lane. It took me a while longer to stop and get my camera out. Here is the scene. The car heading away is breaking the law and I think only realised when he reached the bollard that separates the cycle lane from the road at the junction.

The driver made the mistake when turning out of Tennis Court Road – there is a big sign there indicating the one –way nature of the road (to motor vehicles) but perhaps he normally cycles everywhere.

The driver of the silver car coming towards me seemed a bit bemused. 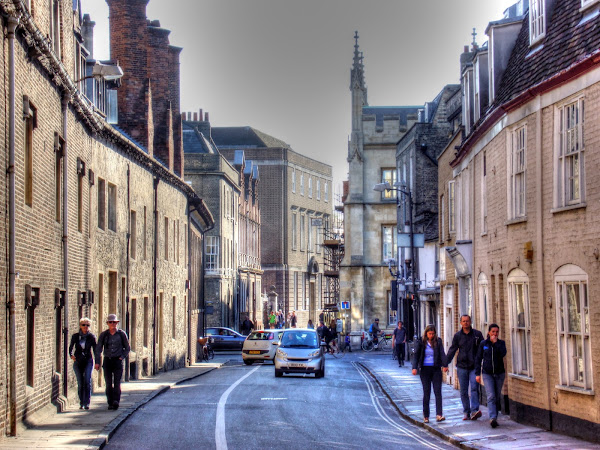 I think if I had been driving the beige car I would have turned left and up Trumpington Street and put it down to experience (and hoped not to have been seen by a passing policemen).

No this driver turned round just by the junction, blocking the road to cyclists and cars.

This is a reminder that many towns and cities were not built for cars, yet motor vehicles now seem to dominate the thinking and the assumption is that we must give accessibility to motor vehicles – at the expense of accessibility of cyclists and pedestrians.  Don’t believe me – well “As easy as riding a bike” has written an interesting post on “Accessibility versus amenity” which shows how such conventional thinking is making it worse for shop centres.

Driving turning around on Pembroke Street 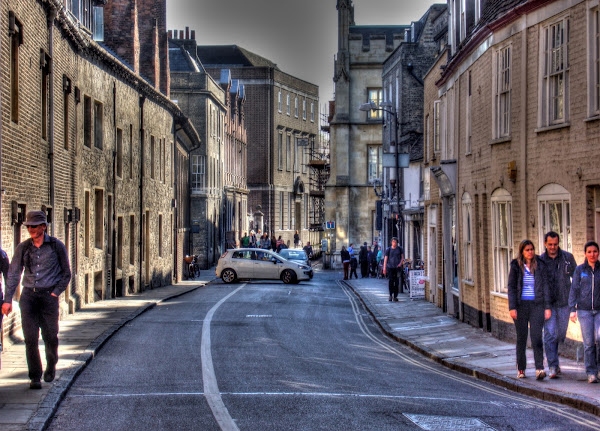 I noticed that a bike was being used to advertise the Hotel du Vin. It is a shame we don’t see more working bikes rather than like this one put out to grass. 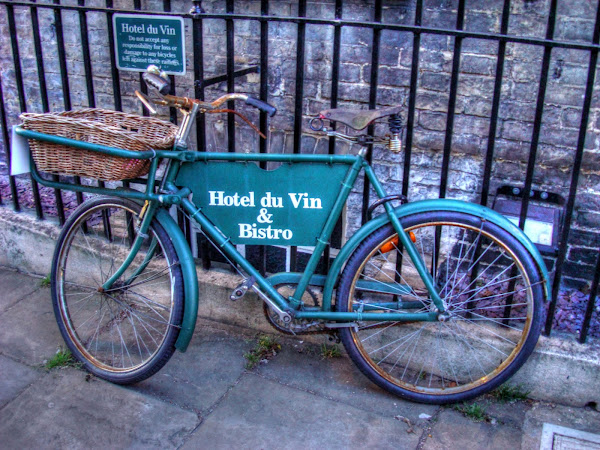 Mind you we do have Outspoken Delivery – a Cambridge Courier firm who use a range of bicycles and can carry loads of up to 250Kg. They have zero vehicle CO2 emissions.