Note - because I started my Posts about cycling to the King's Forest and from Bath to Bradford upon Avon in August they will appear as older posts than this one - check out August and when I have published them I will add the relevant links. Here are the links to

Whilst I am playing catch up with my Blog some interesting news has popped up. The other night I also found that Zoundry Raven would no longer upload photographs properly to my PicsasaWeb account. This had the effect of preventing Zoundry from uploading the Posts properly and so constraining me to text only posts. As a work-around I uploaded the photographs using Picasa and then edited the XHTML using Zoundry to include the picture links. It worked but was a bit tedious.

A quick search using Google did not throw up any other reports of problems using PicasaWeb so I assumed that it was a change in the PicasaWeb API which meant that as Zoundry Raven is no longer being updated I was going to have to make a move to another off-line editor. Before jumping to that conclusion I did a few experiments, with different pictures, I checked the Zoundry logs and deleted a load of clutter that seems to build up over time. Nothing worked. In the end before re-installing Zoundry I convinced myself that it was a change in the way Picasaweb worked rather than my copy of Zoundry which had broken.

So I loaded up LiveWriter, which I have used from time to time and had a play. After some time I evolved a method that seemed to work. I loaded up a plug-in that interfaced with my PicasaWeb account so that importing photographs was easy. On the way through discovering that the plug-in did not seem to work if the Album it was pointed at was too large. I also had some "fun" trying to get my pictures to the right size and setting their "clickability". It also turns out that the last time I used LiveWriter I was using a different template - but that was easily sorted. So the upside is after an hour or two of fiddling I could publish Posts that looked similar. Although if I was going to add borders to my pictures then I would have needed to edit the XHTML. With that I went to bed, it was late, but with a way forward. The next day Zoundry Raven was able to upload to PicasaWeb - there must have been some overnight glitch - argh!

So it is back to Zoundry - but at least I have ironed out an alternative route. I even left a message for the author of the Picasa plug-in about possibly adding borders. In the meantime stuff is happening in the news and I am getting further behind on updating my Blog - ho-hum. I got out for a ride for the first day after my hols yesterday - the weather was fantastic - warm and still.

So what has caught my eye in the news - well the road in this pictures (between Oakington and Longstanton). Not long after it appearing in the press as a problem than there was a new report "Drivers fined for using no-go shortcut". Apparently more than 100 drivers were fined over a two-day period. Over a combined period of 5.5 hours only 9 vehicles were legitimate road users!. Also one road user was also caught out without insurance and ended walking back! Cambridge Cyclist has a bit more on the topic and saw the disgruntled uninsured motorist walking back. Check out the last paragraph on his Post! 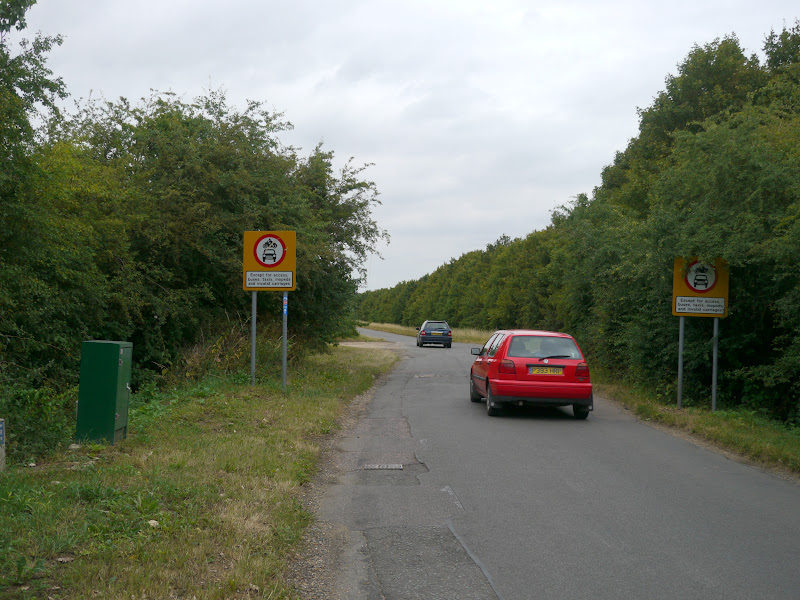 Of course that other Cambridge topic to rear its "ugly" head was the Cambridge Guided Busway, which could open "next spring"! Apparently at the current rate of progress it could take 7 or 8 months to complete so the CCC might step in. I am surprised that it would be that quick since no progress seems to be evident on some of the problems. The latest Cambridge County Council Press Release is here and the report to be made on the 7th September is here (a Word document). Item 2.9 discusses the Maintenance Track (cycleway!!), apparently the Environment Agency are taking a helpful and pragmatic stance - but the plan to have a plan to fix the problem has slipped by a month - so who knows when they actually expect to fix the problem. Further reading of the report shows that the maintenance path is a cycleway and referred to as such in items 3.4 and 3.6. The latter suggests that the cycleway between Milton Road and Longstanton might get surfaced before completion - about time. This is the worst bit of the track (apart from the areas that are prone to flooding!).

Just a reminder paragraphs 5.4 and 5.6 re-iterate the high quality path available to cyclists and walkers. By the way what happened to Paragraph 5.5! Is there a conspiracy issue - or perhaps someone does not know how to use Word? 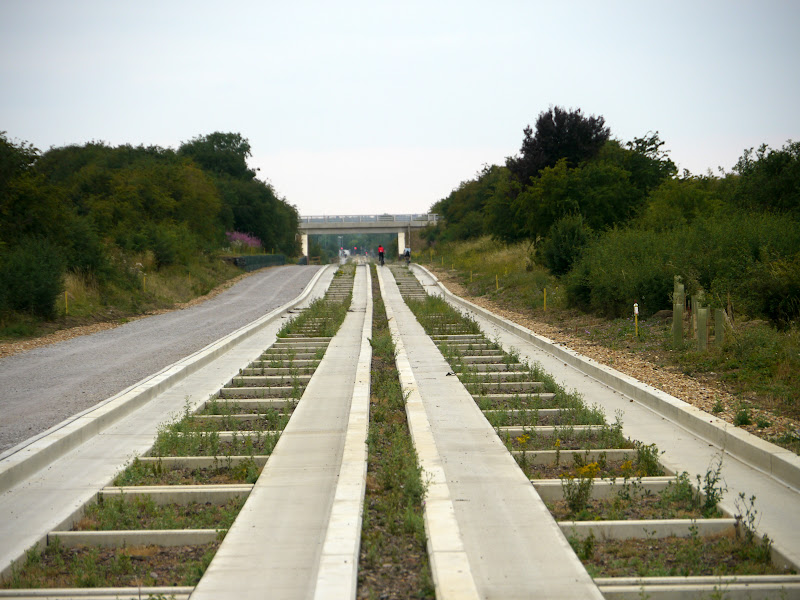 Apparently Manchester travel bosses came to visit the centre of the Guided Busway Universe as there are tentative plans for a Manchester Guided Busway. The conclusion after visiting such a masterfully run project - "Manchester busway may be ditched after Cambridge visit". Why they want to run their busway in a ditch I am not sure - perhaps that way it will be designed to cope with water right from the start! For further news reports see www.noguidedbus.com.

And finally - I have bitten the bullet and acquired a new piece of software. Since switching to Windows 7 I have found that the Backup software seems to have taken a major turn for the slow. It was so slow that I switched to monthly back ups from my usual weekly ones because even an incremental backup was taking 30 hours to complete. My brother-in-law suggested Acronis (he uses it and is an IT professional). What made me switch, well I got an email from PCWorld offering it with a £10 saving when bought on the web. So at just under £20 I decided it was worth a try.

I have now been using it for a few weeks and have gone back to weekly backups it is much quicker, my full backup was around 6 times quicker and the incremental backups seem even faster. It offer more choices so after I have gained some experience and tried to restore something I will have another play and optimise things. It even offers a near "real-time" option which I have yet to play with.