Tuesday, 23rd April 2013: I seem to remember planning on fewer picture in my Posts (quality over quantity) and cutting the time between the doing and the posting. Well both of those “resolutions” seem to have gone out of the window.

The good news is that the Bank Holiday weather seems wonderful – let’s hope I can find some time to ride. The flatlands are a dry part of the UK and so all the tracks and byways seem to be drying out nicely.

Also the Cycling Petition has hit 51,450, although I am a little worried that UKIPs approach to cycling seems a little odd if one of the Cambridge candidates is anything to go by.

So this is another exploration of the byways and bridleways around the Lodes Way. An exploration, not for me to discover them, but rather to check out how cycle-able they are.

So this ride uses The Lodes Way as the backbone but visits Oily Hall Farm, Tubney Fen and Wicken Lode.  Here is the Bike Route Toaster Link, it is a shade under 56Km and quite a leisurely ride, mainly because you have to go more slowly on the tracks. Well I don anyway.

The route heads through Lode as usual but instead of turning down towards White Fen Drove carries on, along Lug Fen Droveway. I stopped to take some pictures at the point in the road where Lug Fen goes through 90o.  There is, or perhaps was, a hope that this could have become a cycle route through to Waterbeach, unfortunately it seems that someone doesn’t want to play ball.

Although the road does a dog leg, Bottisham Lode carries on towards the River Cam. Two footpaths also carry on, one each side of the Lode. this is Bottisham Lode, looking back towards Lode. 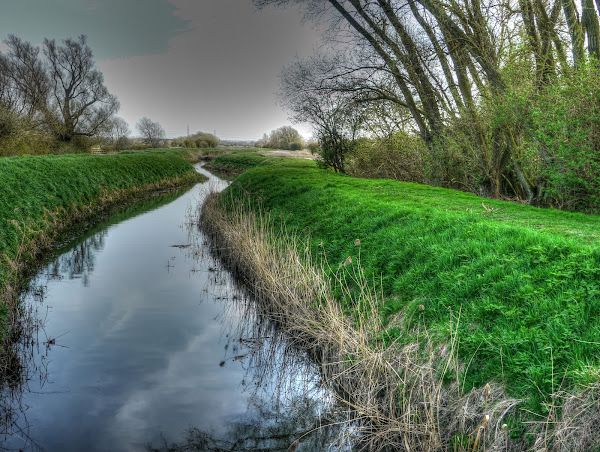 And here is the map, I forgot to mention that you pass some Polo Fields along Lug Fen Droveway. I don’t actually know what “Lug Fen” means.

Map of my Ride 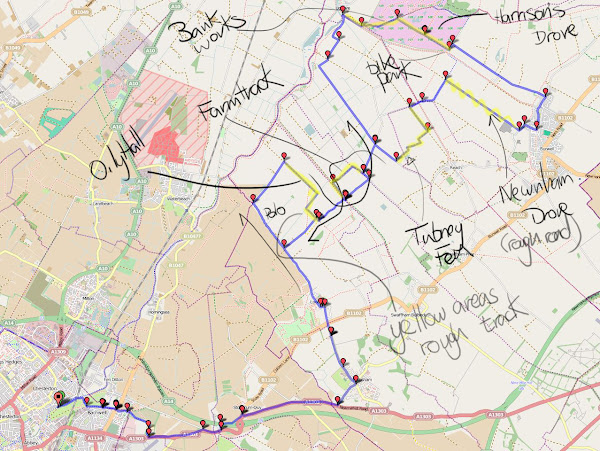 It would seem that one o f the footpaths goes through a garden walkers are reminded to keep dogs on leads and themselves on the path. 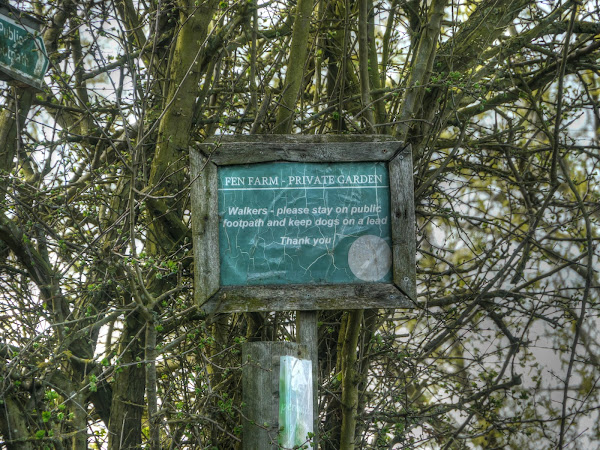 It was a glorious day for cycling though, I carried on along Lug Fen Droveway until a T-junction where I turned right along a track to Oily Hall, past freshly ploughed fields, blue skies and puffy white clouds. According to the OS map the track towards Oily Hall Farm is called Mill Drove. 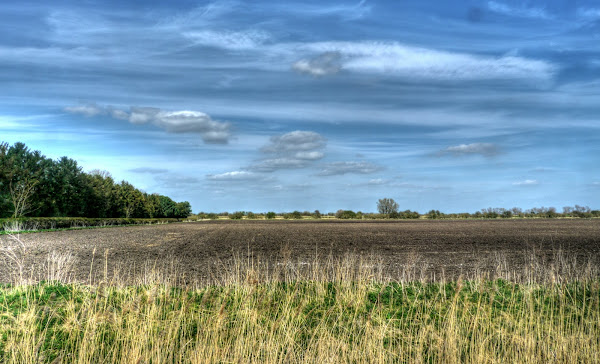 This is Mill Drove – a pretty decent track – with no traffic whatsoever – well whenever I have been this way. 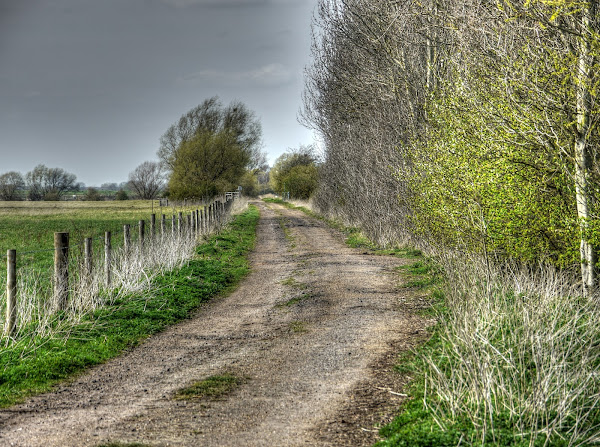 There is a barn, which on the OS map is labelled Oily Hall Farm, but there is no farm house. You reach one of the larger drains – Commissioners’ Drain.  That brick building use to be a pump station, I assume for irrigation purposes, but perhaps for drainage. 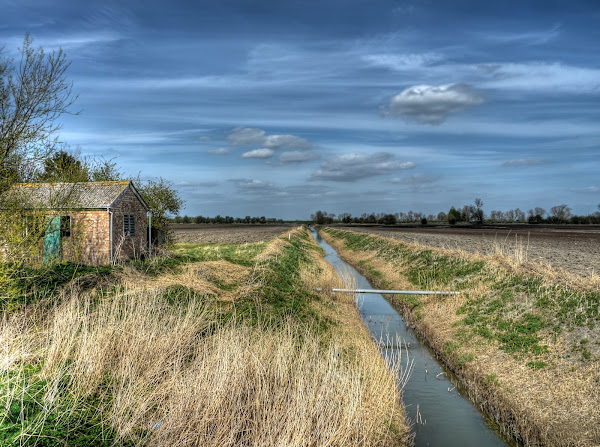 On the 1930s map of the area there are various routes shown, this one takes you through to White Fen. Crossing White Fen at this point – where you then head down past the pylons. 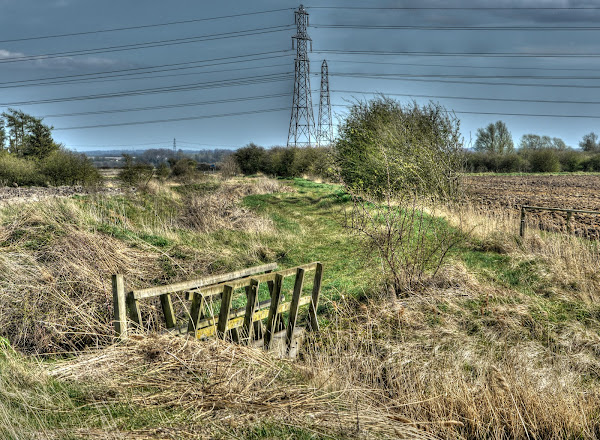 Back on Lodes Way once more I stop to take a picture of the almost mirror surface of Swaffham Bulbeck Lode.  The trees each side are coming into leaf. 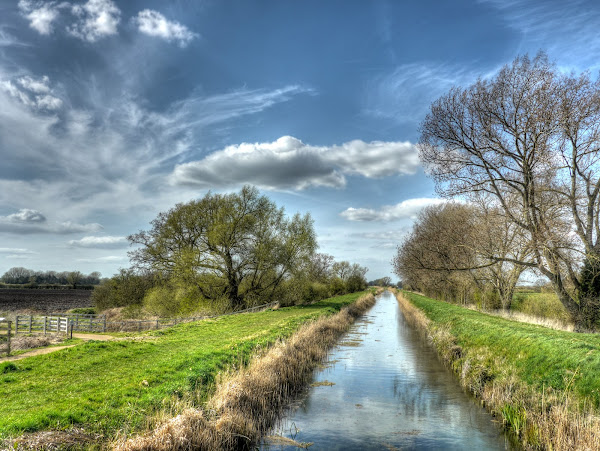 After a small detour along the Lode and then back towards Headlake Drove (a road) via Rail Drove (a track) I carried on up to Upware on Great Drove. This field was being planted with seedlings and then fleeced, I think. There were four or five people, so it is quite labour intensive and I bet back-breaking. Those yellow boxes  are the seedling trays. 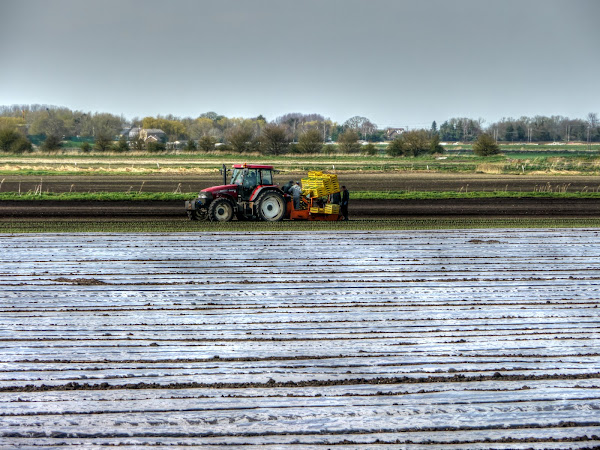 Quite a bit of the field had been planted, quite a bit more was left. 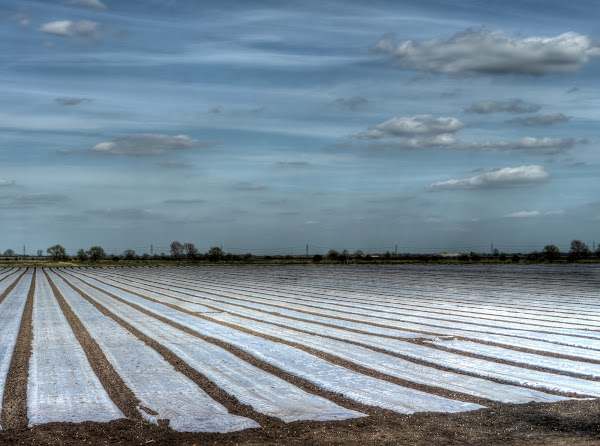 My son was telling me that farmers are already worrying about the possibility of a drought, despite having fields where yields have been hit by water-logging from last year. It isn’t easy being a farmer.

Well there is a fair bit of water that is drained and flows through the flatlands and so there is always a nearby source of water if you need to irrigate. Looking across to the West there was a need to irrigate. You can also see on the OSM map various rectangular “reservoirs” used, I assume, by the farmer to store water. Now they might have originally been dug for other purposes.

Irrigation in the fields near Great Drove 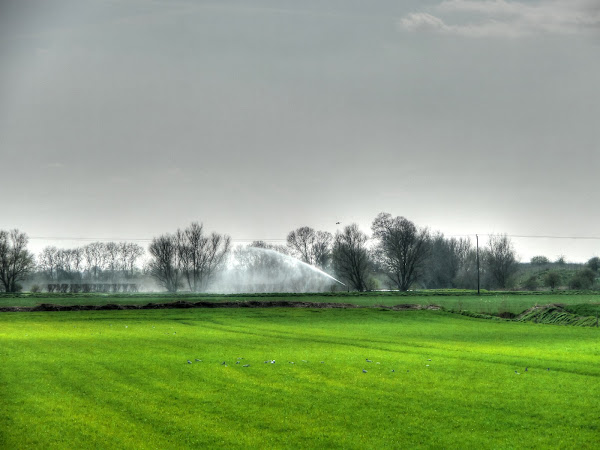 What was I was saying earlier about using fewer pictures – these two seem rather similar – I should have kept this one and left the one above out.

Irrigation in the fields near Great Drove 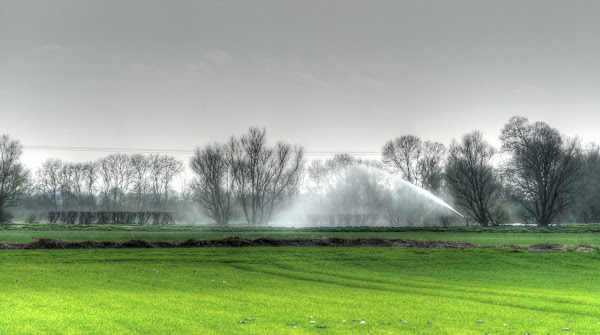 Back looking towards the East – these are some of those seedlings being planted out. I am not sure, but at the time I assumed that some would be fleeced and some not so that there was a crop progression. The building in the background is called Blinkers Hill on the 1930s map. 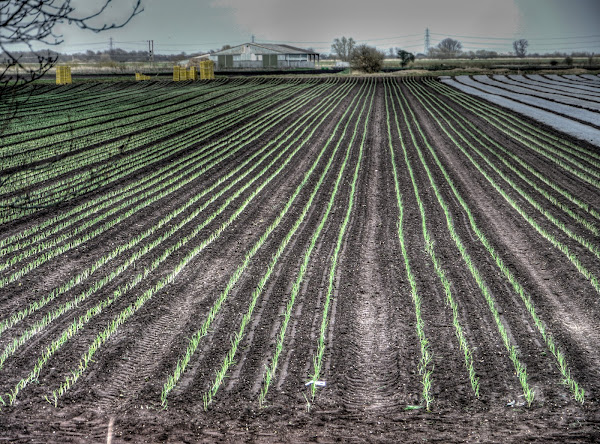 After reaching Upware I turned down along the bridleway next to Reach Lode. It still appears on the OS and OSM maps as a footpath, but is a bridleway.  You then reach a wooden bridge which crosses over Wicken Lode and the bridleway carries along on the South bank of Wicken Lode. 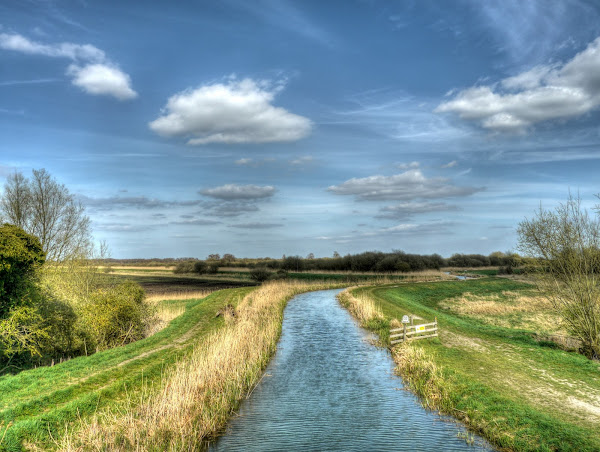 Generally this bank is not too bad for cycling along – although there has been work along here which has made the cycling a bit bumpy! 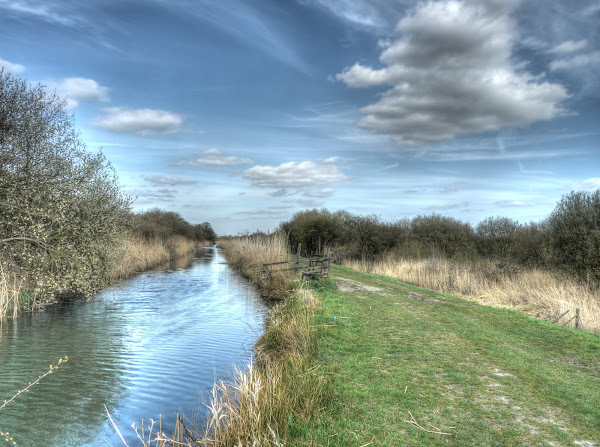 This is a very picturesque spot and the NT run boat trips along here. You can also navigate “short” long boats along here where there is what is labelled as GOBA Moorings on this AA map.  It turns out that GOBA stands for the Great Ouse Boating Association.

Wicken Lode wending its way amongst the rushes 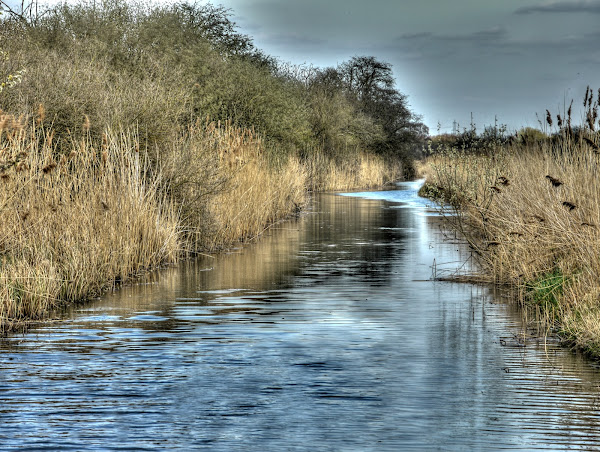 Across the other side of the Lode is the Wicken Fen Nature Reserve. What I like is despite not being very far from civilisation there are times when this feels a million miles from anywhere.  Wide open scrubland under wide-open skies. 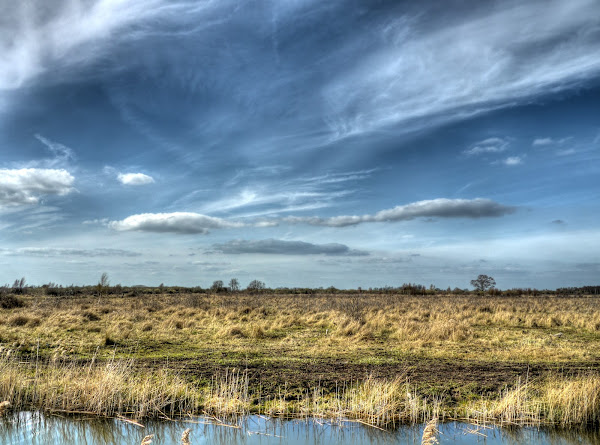 I used to drop down the side of the bank towards Harrison’s Drove, which is where the bridleway goes.  The bank works as removed that drop and it was “easier” to drop down the bank a little earlier. Although the actual surface was pretty unpleasant.

Mind you when it comes to unpleasant bridleways then Harrison’s Drove, there are two – this one goes through the “middle of the nature reserve.   Technically that might not be true – but check the last link for a map.

This is quite a low-lying bridleway and has been a point of issue between local users and the NT. The laws associated with bridleways do  presume  the use for horses, but also indicate that such rights of way must be kept clear.  It seems to me that it also implies it should be possible to safely ride a horse along such a path – I wonder what horse riders think of this.

I did not make it without dabbing my feet down, nor getting caught by a bramble, although fortunately I was wearing gloves. 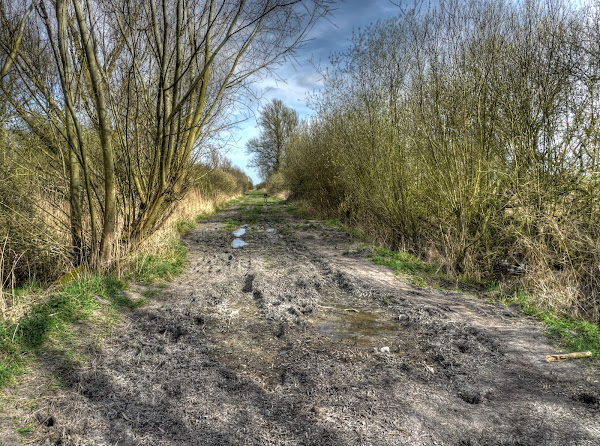 After a short distance the surface is made up of somewhat fractured concrete slabs. Of course being a bridleway I gave way to the two horse riders coming the other way. 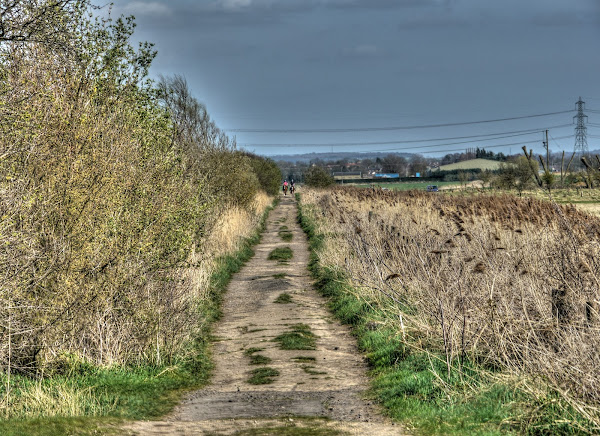 This is where Harrison’s Drove meets the Lodes Way – it seems that there is some call for cycle parking along here for those who cycle and then want to walk.  That isn’t Maisie, but someone else’s bicycle.

Bike Locked up on Harrison’s Drove 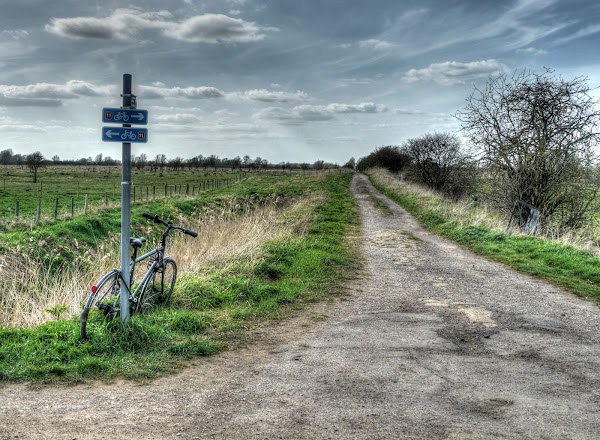 The recently “pollarded”  trees alongside the Burwell Lode footbridge (along the Lodes Way). This work was done by the Environment Agency – but the Wicken Fen Vision Warden has a blog of what’s happening. 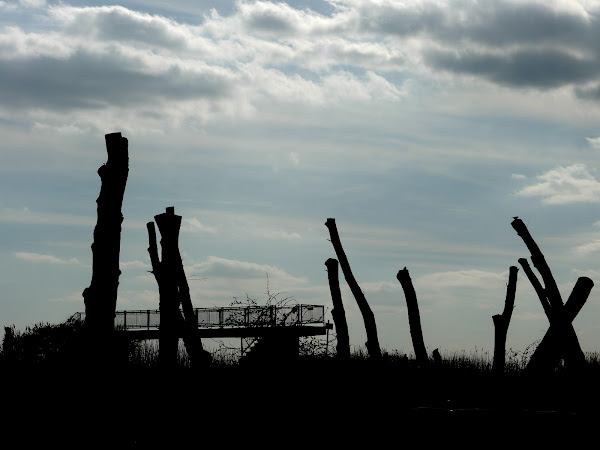 I then popped down into Burwell and back along the really bumpy Newnham Drove – there is quite a lot of water in the bund created around Burwell Fen (although it looks more like Adventurers Fen on the old map.

For a change after cycling along Lodes Way and over Reach Lode I headed down a byway to reach (Straight Drove) and then across Tubney Fen.

This is Straight Drove – it could also be called Rutted Drove – you have to pay attention and pick you routes. Well I do anyway. I got down here without any dabs though.

Straight Fen – a byway to Reach 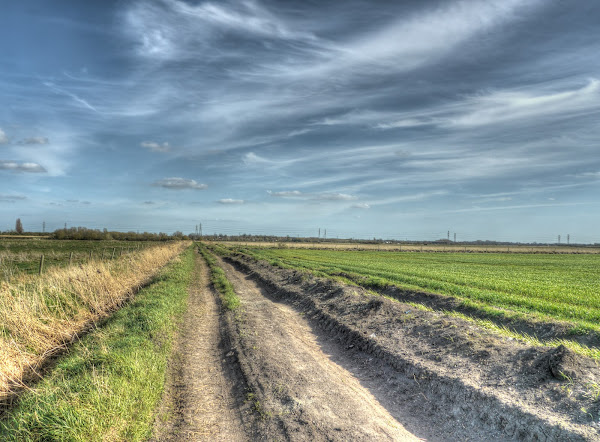 As I was heading across the fen this glider seemed to be making a noise – I assume it must be a motorized glider – although I can’t see it.  The Registration is G-JKRV and I can’t see any on this picture either. Mind you it is capable of mounting an engine – Schempp-Hirth Arcus. One of the pictures refers to it as a “T” version, which according to the company website stands for Turbo.

This picture shows where the engine goes – on the top. So perhaps I wasn’t mistaken. 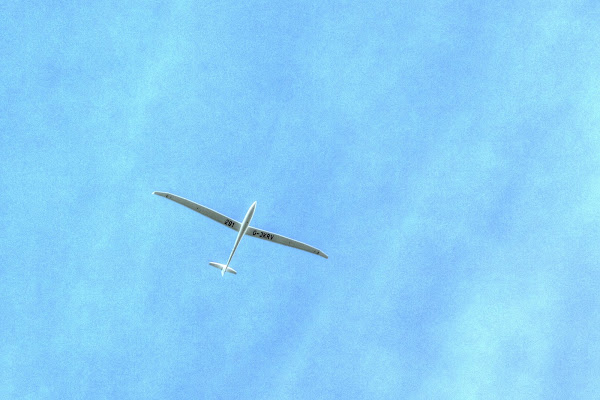 You can’t beat a bit a cycle meandering when you haven’t got anywhere in particular you need to be. The byways and bridleways are certainly cycle-able as well.