There was an old cyclist that swallowed a fly - I really hope he doesn't die!

Thursday, 24th February: The weather seems to have made a complete change the grey days have gone and the temperature has risen to around 12C, if you check out the Cambridge University Computer Lab Weather info you can see the rise quite clearly just after the 22nd. Now despite having to get stuff done I could not resist the temptation to get out and get at least some time cycling in the sun. In fact because I haven't been out for a few days I felt it had to be a longer run. I managed to get everything wrapped up by around 4pm and set off. Despite the late start my plan was to do a loop taking in Coveney and Ely. I knew it would be dark on my way back, but I did have my powerful rechargeable light (Exposure Maxx-D) and I figured a cycle up alongside the Cam in the evening sunlight would be good for a few pictures.

I have to say I really like the fact the the days are getting longer - or rather the sunset is getting later it is now around 5.30pm and come the end of March it will be two hours later than that (7.30pm). This is a loop I have done before, but some new annotations on the map for this particular ride. The Bike Route Toaster Link is here. The distance was just under 75Km (47miles) and I have to admit that whilst the spirit was very willing the flesh was a little weak. Towards the end of the ride I had to get off and do a bit of stretching. When I got home I had a bottle of cider with my supper and later fell asleep in front of the television. The good news it that I felt ok the next day. There were three "hills" en route, they look worse on the BRT chart than they were. Mind you even a small hill gives a good view here in the flatlands.

While writing this Post I am listening to my latest CD - Let England Shake - PJ Harvey - really good, I have already played it around 5 times. 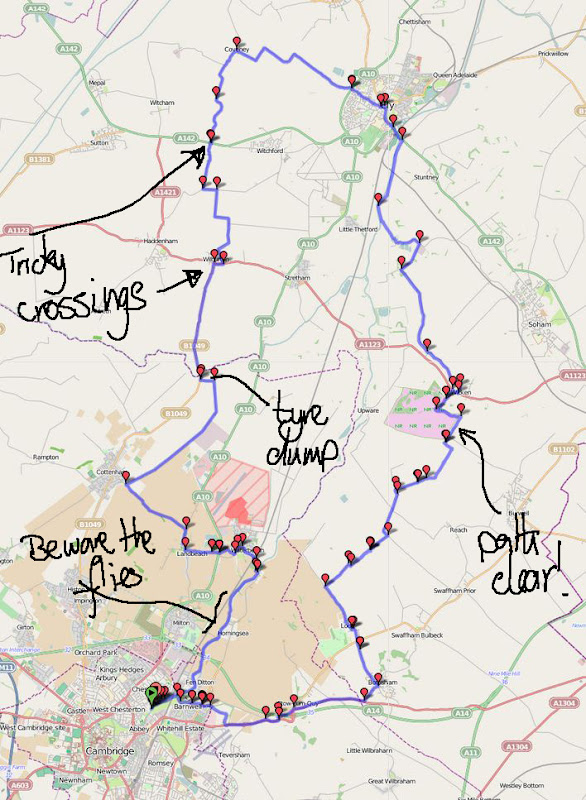 One thing about the nice weather, it has brought out the rowers, some look as if they might need more practice than others though. This lot weren't bad, though they did splash a bit. 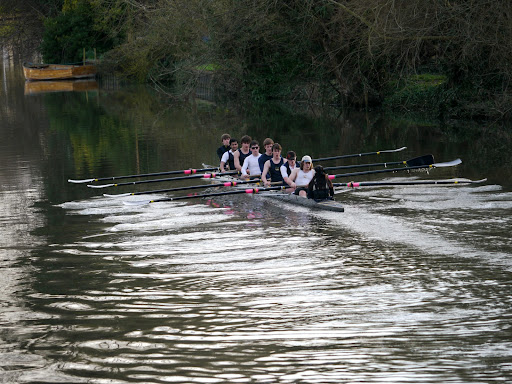 My apologies if I have got this wrong, but the rower in the middle looks like a man from the back and the cox seems to have used a tie as a headband to keep his hair out of the way. 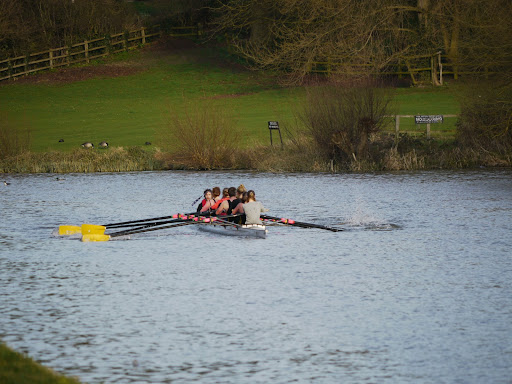 The sun was getting low in the sky by the time I got out - this is the view looking back towards Cambridge with the Cambridge Museum of Technology Tower providing a landmark against the lemon skies.(Along with the Cambridge to Kings Lynn railway line and a crane,) 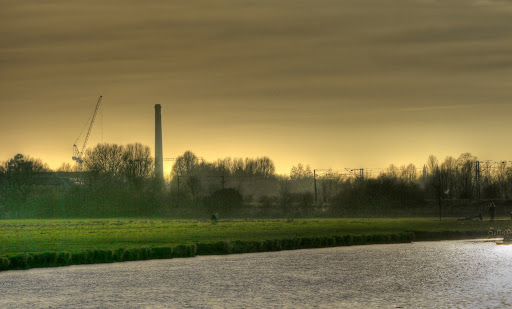 There were quite a few boats on the river along with their coaches cycling along the towpath (NCN11). I took this picture into the sun which is why it is more of a silhouette. I found myself overtaking the boats and cyclists, stopping, taking a picture or two, being overtaken and then having to leapfrog them again. Be warned the cyclists are focusing on the rowing so give them warning. 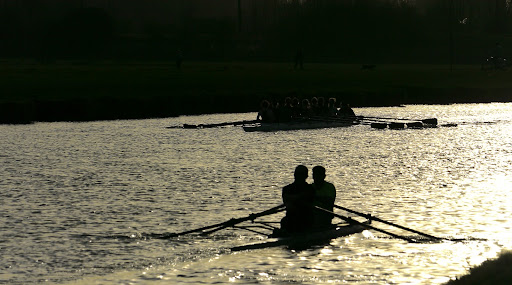 The rowing boats don't go beyond Baits Bite Lock though. There are other boats that do use the lock, but the water traffic drops off considerably at this point. As you cycle up the path you pass the village of Fen Ditton on the other side and after passing under the A14 (and then Baits Bite Lock) the village of Horningsea. Somewhere along there you pass a row of large Willow trees growing in a garden - seen here after I passed them. I had my long lens and needed to cycle up the track a bit. The Google Satellite picture of the area shows that racing (boats) was taking place on the day. 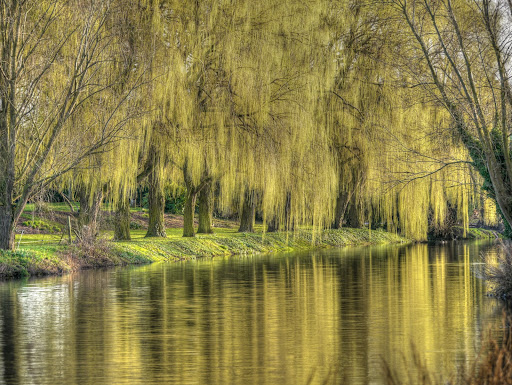 This is the path looking North, it was around here I swallowed a fly, I don't know why, but I didn't die. I guess that was another sign the weather has warmed up - flying insects along the river. The path all the way along the river is pretty firm which makes for good cycling. There were a few people out walking so a bell helps. Just try not to scare people so much that they jump in the river. 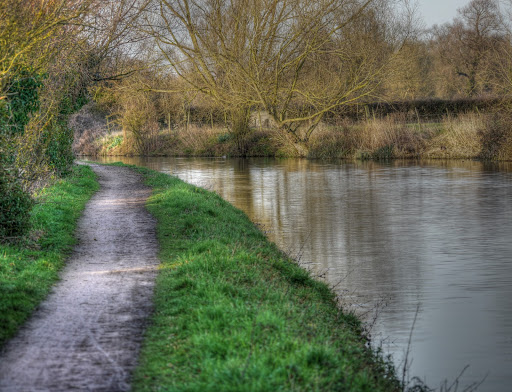 The sun wasn't hanging around though it was setting so I carried on up to the outskirts of Cottenham where I take a narrow country road to avoid the "main" road north out of Cottenham - the Twenty Pence Road. I should mention that just after Waterbeach you have to cross the A10, but there is an island in the middle and I have never found it that difficult. The track is called Long Drove and runs along for a few kilometres in parallel with Twenty Pence road before joining it just below the point where it crosses the River great Ouse. Nice lemon skies though. 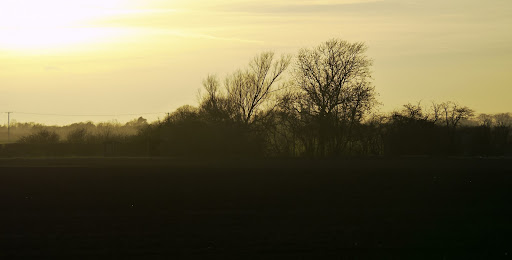 This is the Long Drove, I couldn't quite get the focus point where I wanted it - but you get the picture. The barriers at the end are where a bridge is being repaired. At that point the road itself heads left. 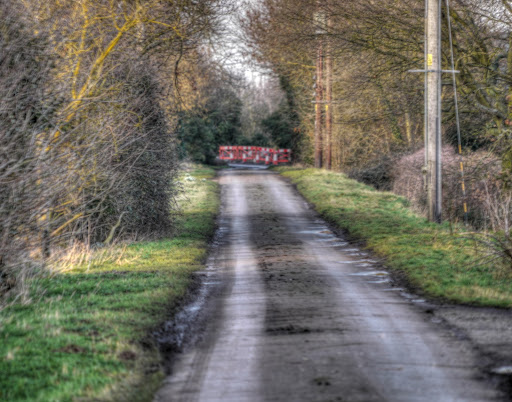 Long Drove does another left turn just after crossing a drainage ditch called Engine Drain. They suffer from fly-tipping out here as well. Although to avoid any safety issues the tyres have all been cut across the tread - can't create a Health and Safety Issue can we. You can see how, from the "warmth" of the picture the sun was pretty low at this point. 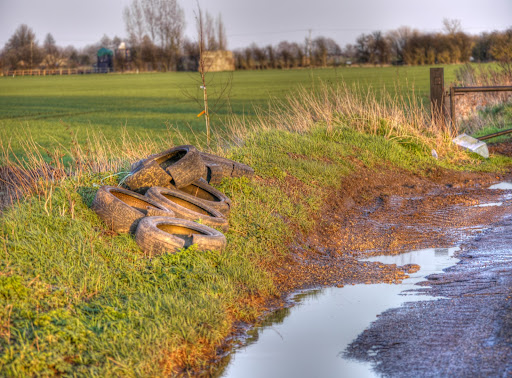 This is the bridge over Engine Drain. 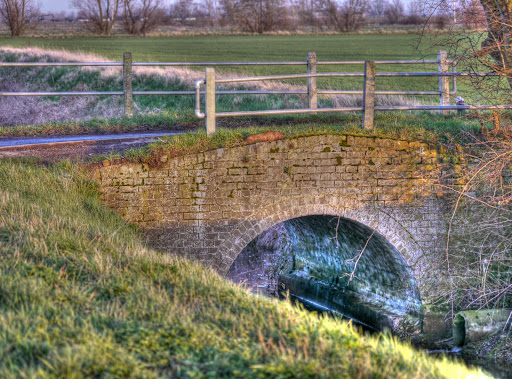 When I reached Twenty Pence Road I stopped and took some pictures looking back. The Drove turns right just at the bridge 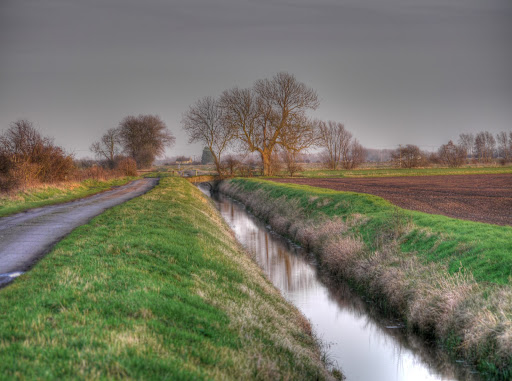 Twenty Pence Road between Cottenham and Wilburton is quite a fast road for a B road (B1049), it is fairly straight, but fairly wide and I find that most cars give you a reasonable amount of space when overtaking. I did put on my rear flashing light and I was also wearing fluorescent yellow though. Since we were all heading away from the sunset there was also less likelihood of them being dazzled. The sun was getting quite low down in the sky by this point This is the Haddenham Water Tower. 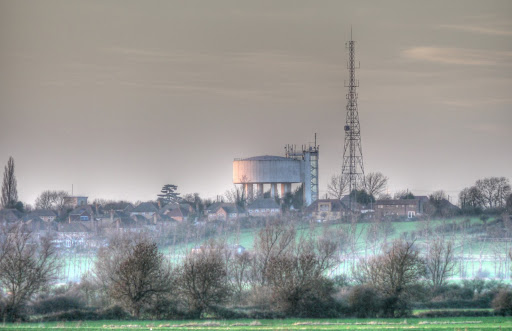 The photographs now tail off as the sun was setting and I wanted to make a bit of progress on my journey. Crossing the A1123 in Wilburton was not too bad, although there were quite a few drivers in the queue on the way through to the junction who were probably not very happy that I could just cycle up past them. The cars on the A1123 had to slow down as they drove through the village though. Crossing the A142 between Ely and Chatteris was much worse. It is a fast road, no island and there is no reason that the traffic should slow down, especially during the evening rush hour. I did get across but it was quite a long wait.

I did stop on the hill up to Coveney though, to catch the last of the lemon yellow skies. I also saw a black rabbit in the grass verge, but it moved too quickly for me to stop and take a picture of it.

By this point the sun seemed to slip away pretty quickly. After passing through Coveney and on the way to Ely I realised that there was no way would I be cycling along Lodes Way with any form of sunset to photograph. The skies had turned pale purple - although I did not really capture the colours in this picture. 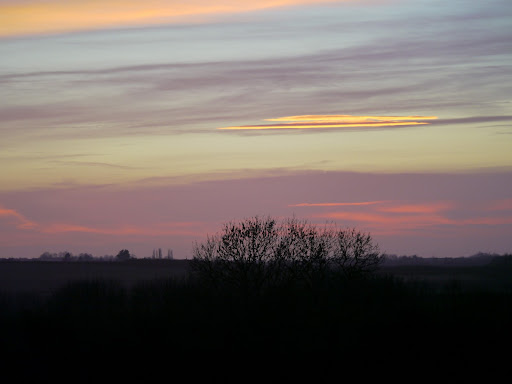 By the time I reached Ely it was quite dark, but my front light was great cycling along the NCN11 off-road path alongside the River great Ouse. I say alongside but it is not that close, you don't feel you are going to fall in, but a bit of decent light is reassuring. When I got to the railway bridge, which is called the Newmarket Bridge on the OS map I did try to take some nighttime pictures looking back at the cathedral. The tower looked almost as if it was floating in the sky it was so much brighter than everything else. Unfortunately even resting my camera I could not hold it still enough and the best picture was still over-exposed and wobbly. 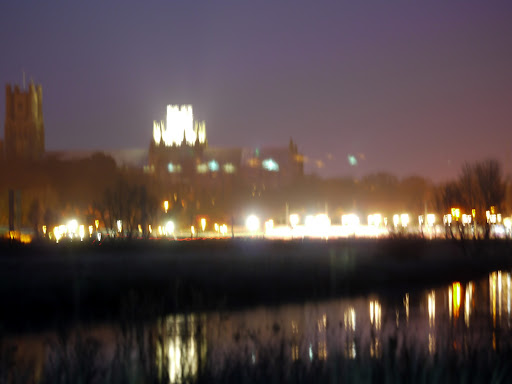 The rest of the journey was uneventful. The good bit of news was that the path modifications on the other side of Wicken Fen are complete enough that you can use the new cattle grids and not have to walk through the churned up muddy fields. This was a good thing because I was feeling the miles in my bones. I did stop to have a stretch at one point which seemed to do the trick. The trouble is I know that a 50 mile cycle ride is quite doable, unfortunately I have not been cycling quite as many miles this year and my body wasn't quite keeping up with the spirit. . A related bit of Lodes Way news is that the need for a gate on the exit of Wicken Fen has been removed by the new cattle grid system which speeds up the ride a bit. Having to carry my bike over the bridge over Burwell Lode was trickier in the dark though.