A ride around the Deepings: Returning to Peterborough Railway Station–the long way

Thursday, 6th September 2012: This is the sixth part of my ride around The Deepings, it started with Part1: Planning a ride around the Deepings, followed by Part 2: Getting There from Peterborough Station, Part 3: 1st Leg Glinton to Crowland, Part 4: 2nd Leg – Crowland to Spalding Part 5: 3rd Leg – Spalding back to Glinton. This covers the return back to Peterborough Railway Station via the Green Wheel. The main reason I have broken the Posts about the ride into sections is because it makes it easier to get the Posts written – all in all I selected 69 pictures for inclusion in the posts.

This leg of the route was longer than I had planned for or realised- it just seemed too good an opportunity to miss – I picked it because it headed off along NCN21. The length of this bit was 22Km/14 miles and it had a hill in the middle – well alright perhaps not a hill by some standards but for a flatlander like myself 35m is a hill – especially towards the end of a day of cycling, with the wind against me on the way back.

Just before reaching Peakirk and completing the loop I turned down Mile Drove – bit before that I stopped on a Stone Bridge over what I later found out was Maxey Cut part of the network of drains in this part of the world. A quick search on the name and it turns out that earlier this year fish were moved from Maxey Cut as water levels drop. It is 9km (5.5 miles) long.

Maxey Cut from the Peakirk Road 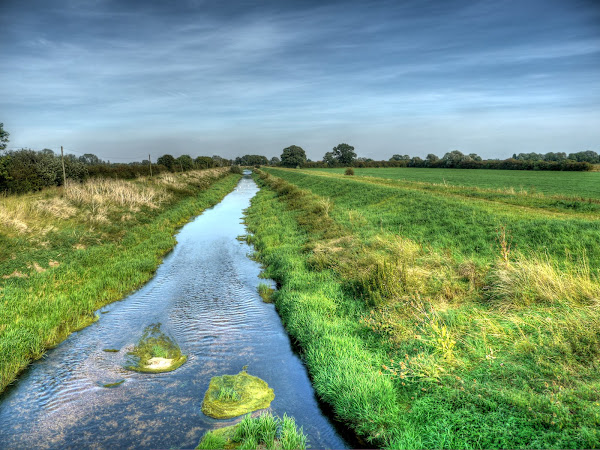 I only realised when writing this series of Posts that Deeping St Nicholas has yet to make it onto the OSM map. I have to come to pretty much believe in the OSM maps so to have a missing village is surprising – but a reminder that no maps are 100% – certainly the OS maps aren’t.

I have also noticed that occasionally the OSM and Google maps don’t always agree exactly on road placement. Mind you my GPS can often give different co-ordinates for the same routes on different days. This is most noticeable when I compare my GPS plots for my daily cycle to the newsagents and back. I suppose given the accuracy of the GPS system it is to be expected. Sometimes my GPS unit struggles to “see” the satellites and sometimes  I reckon there is an “off” satellite up there as it reports quite a shift in position. I do not set my GPS to lock to roads – because it can get confused when there is a byway next to a road and hops between the two. 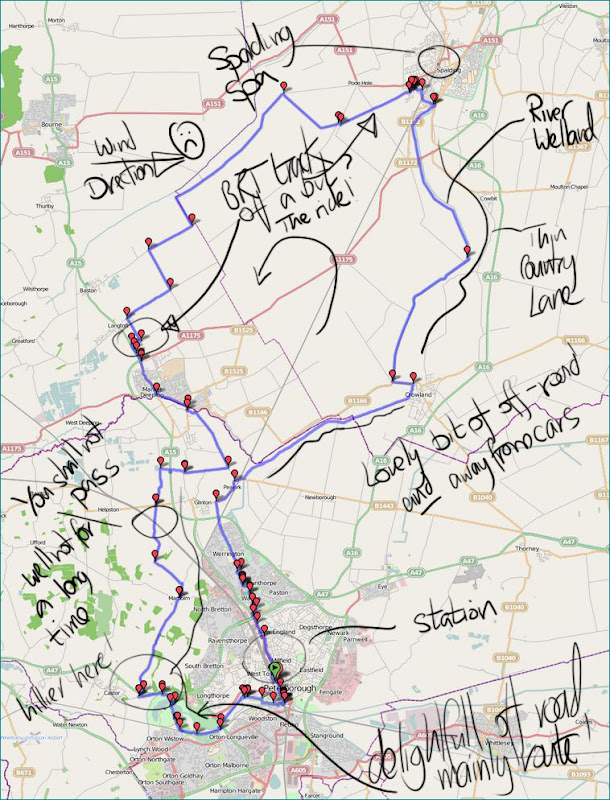 For choice I like to cycle along varying  terrain with varying views. I reckon that gently undulating is the best – you get small hills both and up and down and if there is a bit of woodland around and it is off road so much the better.  I liked my ride around The Deepings but was ready for a change of scenery and I was fortunate enough to get a change of scenery. After Mile Drove the route switched to this track with a tarmac surface. I must have passed Nine Bridges (viaduct) but was more interested in making progress I think.

NCN21 near Nine Bridges (part of the Peterborough Green Wheel) 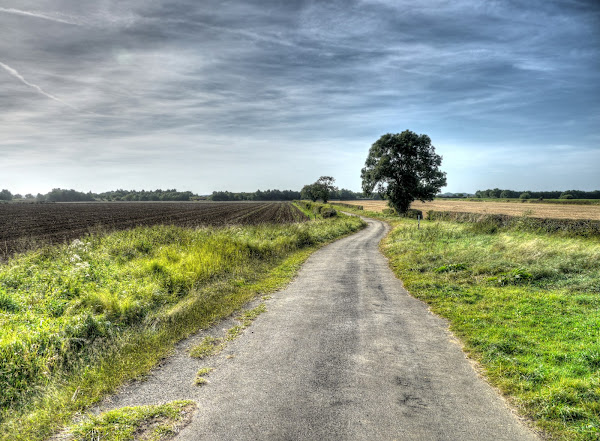 This route crossed the A15, which looks to be a busy road, fortunately there were gullies – perhaps not suitable for penny-farthings but perfectly serviceable for me.

NCN21 Crossing under the A15 – up and down tubes 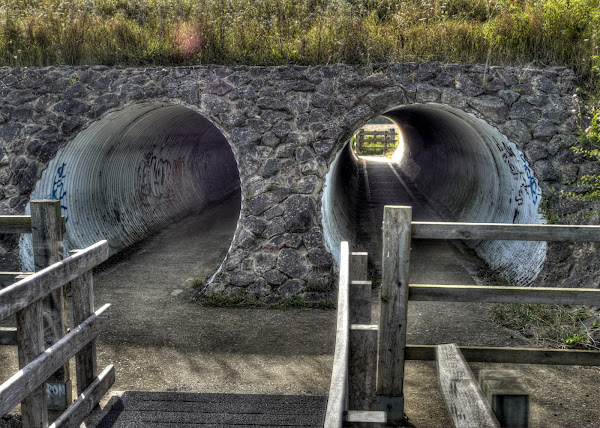 After the cross-under yet more traffic-free tarmac – out in the countryside – this is what cycling should be about. The weather was still looking good as well.

NCN21 near the A15 (part of the Peterborough Green Wheel) 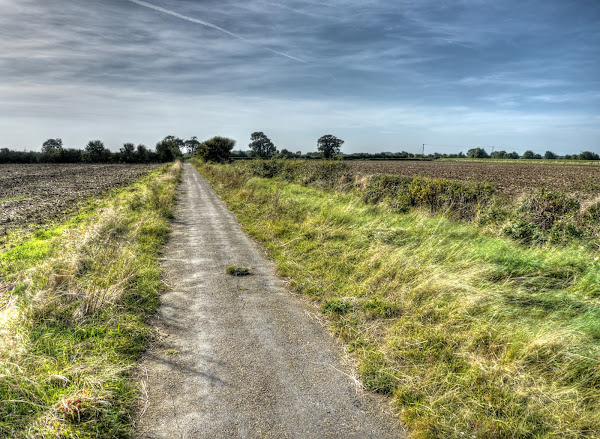 Somewhere off to the side was a Church Spire peeping out with straw bales in the field.  I should really have stopped a little earlier to better frame the Church – but at this point there was no going back I still had 50-60Km left of my ride I reckon. I think it was Etton and I was back in Cambridgeshire. 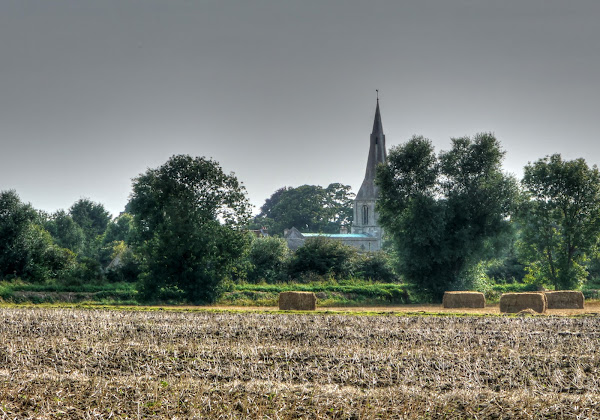 After that I reached a road and turned South – although for a proper road is was still relatively quite and traffic-light. I cycled through Etton and then crossed a busier road – B1443 before reaching this level crossing gate. 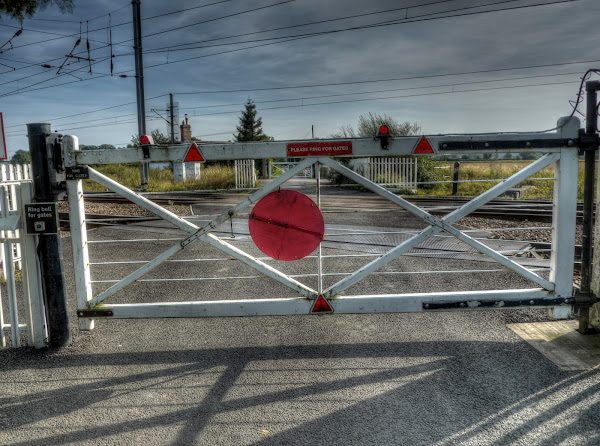 Now it is not unusual, out in the countryside, to find level crossings where you have to look out for yourself – when trains run once an hour then the cost-safety trade-off precludes a manned or automated crossing. This crossing was a new one on me though. You had to ring a bell and there could be a wait of up to 30minutes – did the keeper have to drive over?

Apparently there used to be a GNR footbridge at this crossing – but only over the East Coast Mainline (ECML) bit of the crossing. When the line was electrified it was removed.  This is one of the last gated crossings on the ECML according to the link. If you follow the link there are some pictures of trains taken from the since removed footbridge. (Here is the link where permission if sought to demolish the bridge in 1985.

I rang the bell and the crossing keeper came out and said she would get me across as soon as she could – but there would be a bit of a wait.

Instructions at the Woodcroft Crossing 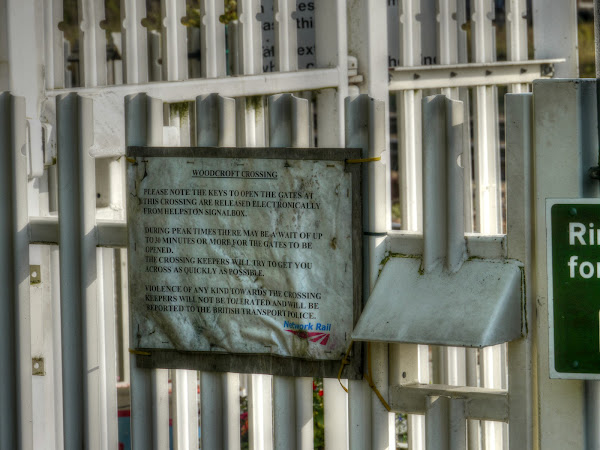 So with nothing better to do I took pictures of trains – don’t worry only two made it into the post. As i stood and watched – the earth moved for me – but no I don’t like trains that much. They thunder through at 100mph plus speeds I would imagine.  After a while I wondered just when I would get across. I did have front and back lights with me – but thought I would at least be back closer to home before using them. 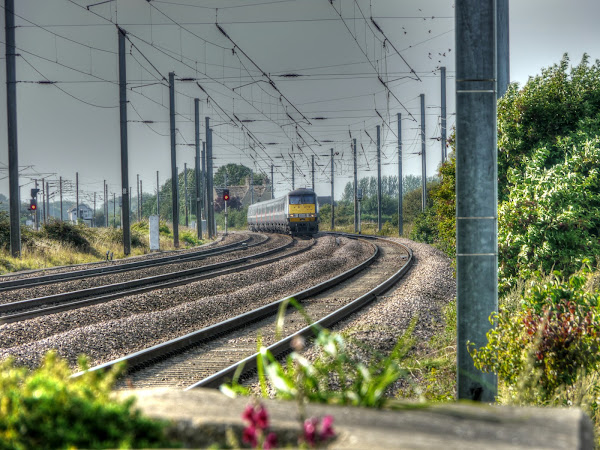 As well as the three lines in the last picture there are a further two at the far side of the crossing. A few freight trains went by – much slower and because they were quite long they seemed to take ages to clear. 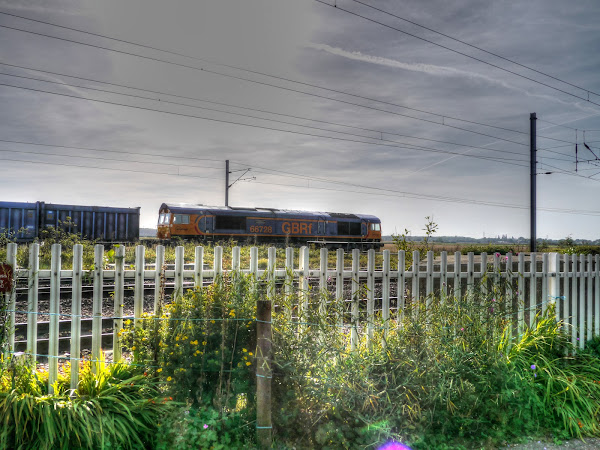 I did get across in the end and I would do it again the route was worth it. Although I did start to wonder whether I should take another way back at one point. Having seen all the trains thunder through it was strange to walk across the crossing – the Gate keeper assured me as she had the “key” or “token” I can’t remember the term she used nothing would come through.

A van crossed from the other side at the same time. There was a family with two young boys on the other side as well, they gave up and headed back down – I passed them. The young lad was making good progress – it also implied that not a lot of traffic comes along the road. Car drivers don’t like it if a cyclist holds them up for a few seconds so they just can’t cope with a 30 minute plus delay at a level crossing.

The road must be pretty quiet – they stick information boards along it – this board provides information on the verges and how they link the habitats between the remaining areas of grassland. 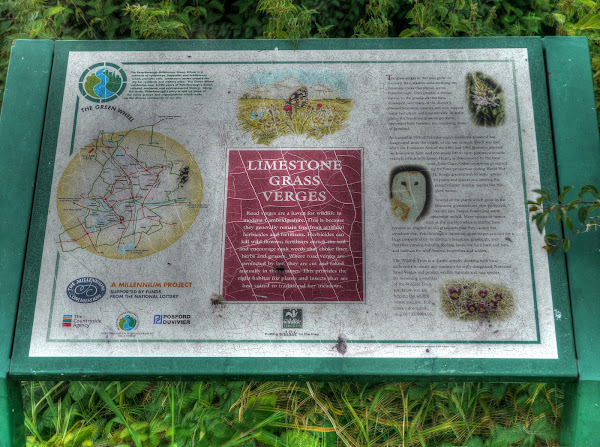 As you might have noticed there are more pictures in this leg of the ride – it is amazing what a change of scenery does for my photography. This scenically placed church is the church of St Mary the Virgin, Marholm. To save time identifying it I took a picture of the Church Board – just after this picture. 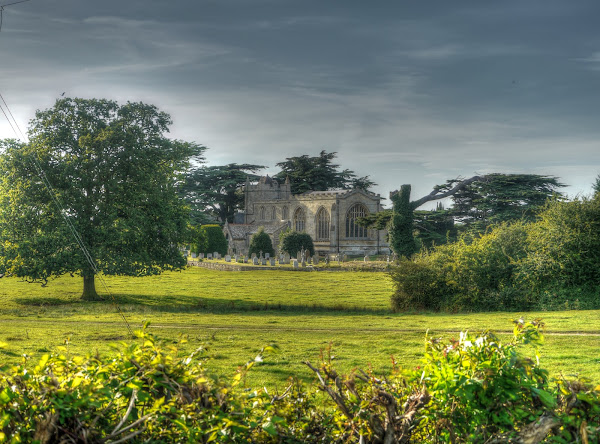 Here is a lot more information on the church – although for some reason it uses Flash – not so good if you view it on an iPad. (It is a Moonfruit website – which is the reason.) 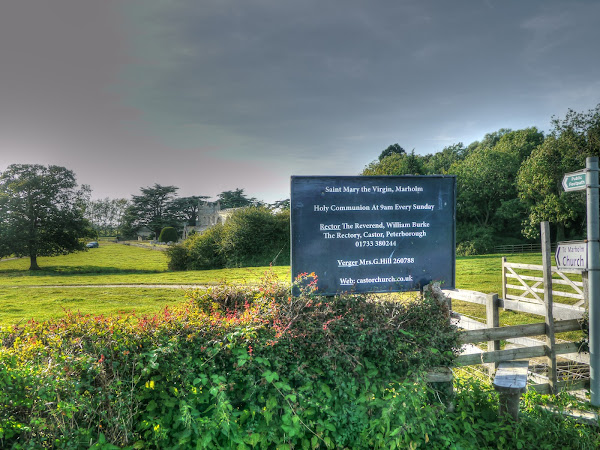 The route carried along through (and slightly up) some nicely wooded countryside – past woods with names such as Belsize Wood, Thistlemoor Wood and People’s Coppice before reaching and crossing the A47 and joining with NCN63. (The NCN63 seems to head west through to Stamford although there was a gap at Barnack.

This is the view from the bridge over the A47 looking back along the way I had come. (off to the right of the picture). 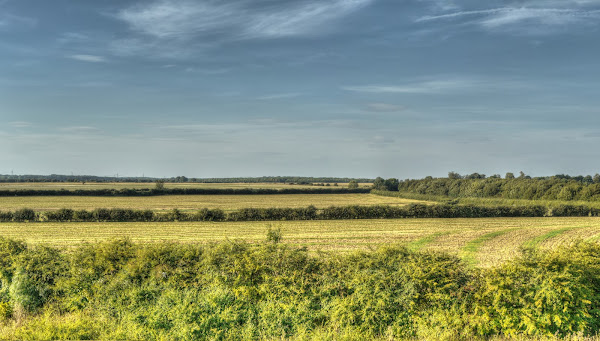 If you were wondering what the A47 looked like here it is – less traffic and better behaved traffic than the A14  near Cambridge. 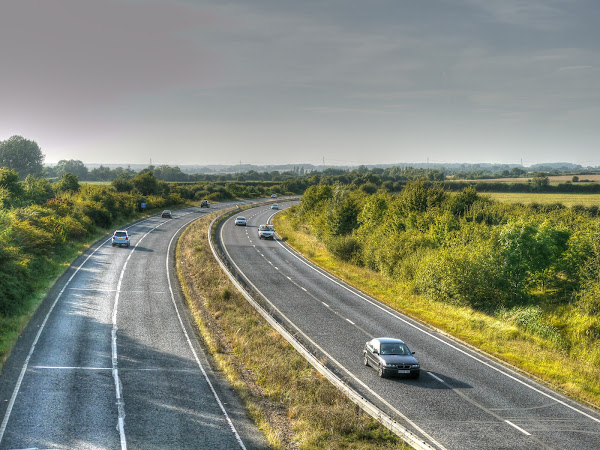 After crossing the A47 the route then headed downwards into Ferry Meadows – the cycle route crosses the bridge you see in the picture – which crosses the River Nene.

When I had plotted my route and created the course I roughly followed the NCN21/63 route into Peterborough – but not exactly. That might have been a mistake as my route was sometimes at odds with the signposted route.  It wasn’t a big problem though, I was pleased that I had downloaded the route to follow though as it could have been slow work navigating through the park relying on the signposts. I would have had to stop and read them! 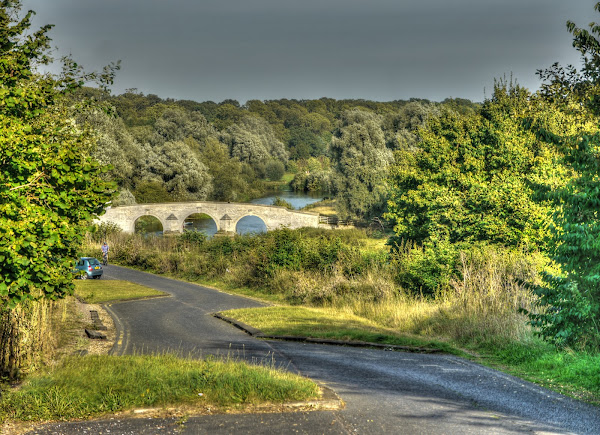 As I crossed the bridge in the previous picture I stopped for this Swallows and Amazons moment. 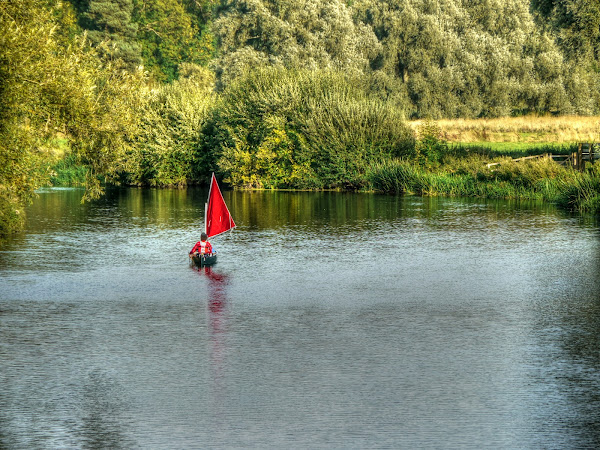 I have to say I was impressed with the places to cycle in the park – although it can be confusing to cycle through for the first time.  I was sorry not to see Thomas the Tank engine on the Nene Valley Railway. he (Thomas) will be pulling a Halloween train though. The cycle route follows the NVR line, before going under the Nene Parkway (big roady-type thing).

You then get to cycle along the edge of this “boating lake” or should I say Rowing Lake – the home of the Peterborough City Rowing Club. Just as when you first learn to swim you have to learn to row widths and once you have master that they let you row lengths. 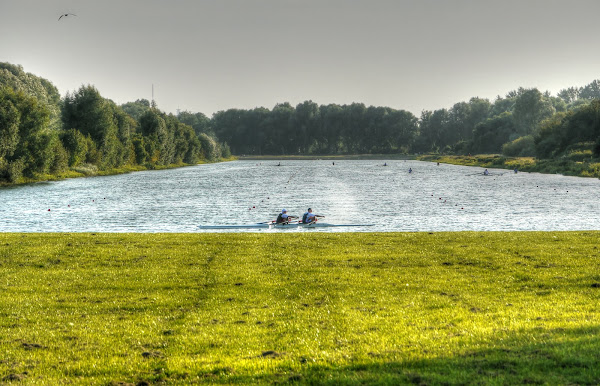 These rowers have progressed to lengths. As well as this 1,000metre lake they also have 6 miles of river available as well. 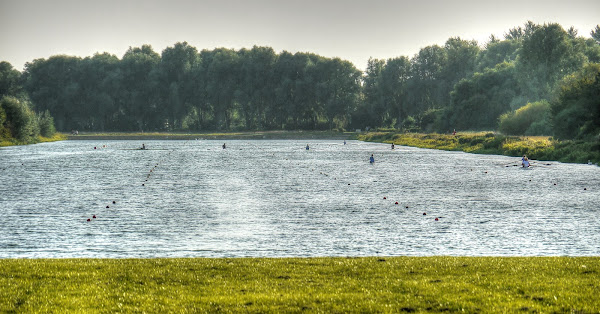 After that it was the Workhouse Cycleway for me before turning onto the Railway Cycleway. I thoroughly enjoyed that last leg – they have some really good bits to cycle along here in Peterborough. Even the rat I passed somewhere near the railway didn’t put me off. Perhaps I put it off as it ran away from me. Maybe I was a little bit too hot and sweaty. I did get a little confused at one point at the Thorpe Road – I found myself on the road rather than following the cycle track – but I soon made it to the station. Time for a little snack and drink as I was feeling peckish – hopefully I could eat them on the train back to Ely.