Monday, 25th February 2013: Although the weather is pretty cold at the mo it is not that difficult to keep warm on short cycle rides. I had a couple of meetings in the centre of Cambridge and because the temperature was only hovering a few degrees above freezing I wrapped up warm.

I had to be semi-formally dressed which for me on a cold day means a pair of corduroy trousers (cords), which I reckon are just the job. I also wore a jacket and a reasonable, but moderately thick shirt and a thin jumper under my jacket (think Sports Coat as they say in the US).

I also wore a thin skull cap, (not the one in the link, but like it), scarf and moderate gloves. I set of a tad later than I had planned and so my planned roundabout route turned into a slightly more direct route – although I still avoided the main car routes through Cambridge. As a consequence I didn’t take any pictures on my way in (or out for that matter‘cos it was dark and I was on a deadline).

Although I was late, by optimising my route for speed rather than pleasure I arrived JIT, said hello to the person I was meeting and was asked whether it was raining?  Yes I was way too warm and the skull cap certainly kept my head warm, so warm that my hair was somewhat sweaty. Oh well, I’ll get the hang of this cycling lark at some stage I am sure.

The good news was that although I had another meeting elsewhere in Cambridge,  because I had sussed out the cycle parking situation on Cyclestreets.net  on their photomap it was a doddle moving on to my next meeting, parking the bicycle and strolling in on time (again). The alternative would have been unthinkable – so I won’t even go there.

I did have a look at the River Cam/Railway Line/Jubilee cycleway underpass which has been recently had its surface modified. It was dark so I didn’t take a picture, I did cycle over it though. By the power of aforementioned Cyclestreets here is a link to a recent picture and map.  Here is Radwagon’s video of the consequences of the new surface.  (Note he has an excellent set of video clips providing a cycling guide to Cambridge on his Blog.)

I would imagine that there was concern about the traction of the wooden surface (which had what looked like sandpaper, rough side up, in strips along the wooden planks. There might also have been concern about speeding cyclists although it is not something I have worried about. The reality is that the underpass is pretty narrow and so even with a ting of the bell I tend to go slow on it.

The other reason I go slow is because I ended up visiting casualty one icy day, before the sandpaper strips had been stuck down. I was going a tad too fast under the circumstances and  my front wheel slipped away from me. I clonked my head, arms and thighs and buckled the front wheel An x-ray showed no broken bones and after having various bits of my body tickled and pushed (Neuro obs stuff – although I wasn’t in Oz)  I had my head glued back together again and went to work.

At the end of the day although there was a bit of sleet in the air I had a jolly pleasant ride home and had worked up an appetite for a new recipe my wife was trying from  Hugh FWs Three Good Things. It was one of the sprout ones, and delicious, although sprouts are not on my list of yummy foods, black pudding is.

Here is a picture I took earlier (Sunday) of a woodpecker pecking in the garden. It was a woodpecker – I took quite a few pictures and that head moves are speeds beyond my camera. It has spots – so spotted, but that’s where I stop. Using Google image search throws up loads of pictures that don’t look greater, lesser or middle.

Some sort of woodpecker feeding in the garden 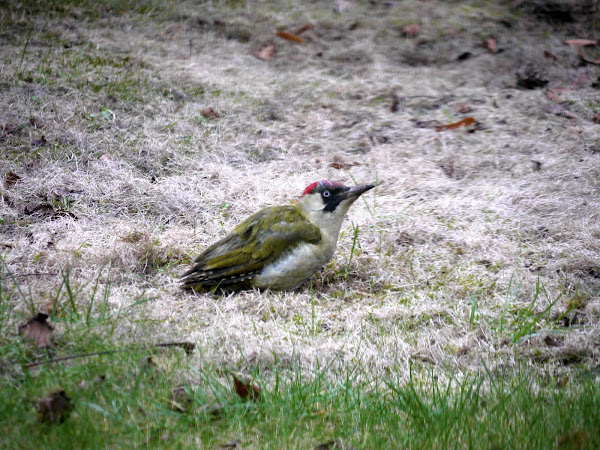