Rambling on a Sunday (and remember the clocks changed)

Sunday, 31st March 2013: Well they tell us the weather is record setting. Mind you given how much weather we have there are bound to be records in all the data somewhere. Last year it was reported that March 2012 was the “third warmest on record” this year they tell us that it was Britain’s coldest end to march on record. Temperatures of –11.2oC were recorded in Braemar. As I sit in front of my computer the sun is streaming in and I am slightly warm from having dusted and vacuumed, in preparation for my the build of new computer. Pretty much everything has arrived and I am busy trying to make sense of the manuals.

I will be going out shortly on my bike. – I have got a load of The Archers to catch up on. Although it seems that “Vanessa Whitburn who has edited the show for two decades is to step down from running the show”.  Apparently fans of the show want to go back to basics. I certainly wouldn’t mind a little less heartbreak and doom and gloom.

Talking of doom and gloom it would appear the Jessops, the camera store has been “re-launched”. They will need to understand their niche and how they differentiate from the specialist websites and the offerings of stores such as John Lewis I reckon. Who will they try to appeal to? The random shopper or the hobbyist. My last three cameras were all bought on the web, although my first SLR was bought from Jessops on the Hinckley road, Leicester in person.

Whilst reading the Sunday Time I noticed an article about bicycle lights and how with modern technology they are becoming too bright. The rules have become rather convoluted it seems. What with flashing lights and rechargeable lights and high-power LED lights. I switched to higher-power lighting systems when commuting on my bicycle along country lanes (rechargeable halogen lights). I would sometimes find myself cycling along a dark country lane and found that the problem was not seeing the road with my old-style battery lights but being taken seriously by oncoming vehicles.

I used to find that oncoming cars and vans would leave it until the last moment before dipping their headlights, if at all. The meant they either didn’t see me or didn’t think they needed to dip their headlights for a mere cyclist. The trouble is with main beam headlights I was blinded and was practically unable to see anything or judge my position on the road. With a brighter front light oncoming vehicles would dip their lights a reasonable distance away and I wasn’t blinded. When LED lights with better (lighter and easier to charge) Li-ion batteries I made the switch to Exposure Lights and have been very pleased. For about town cycling I use a Joystick and for country lanes and byways and bridleways I used a MaXx-D.

They have been very reliable, easy to charge and have good battery life. They also have a user-switchable power output. According to Wikipedia a car headlamp outputs around around 1,500 lumens (Halogen) and 3,000 lumens (HID) whilst the MaXx-D outputs 1600 lumens. So cyclists still have a way to go in terms of power. I guess the issue is that headlight beams are shaped whereas cycle lights tend not to be, which is why some of the poor motorists are complaining.

Personally I have never be dazzled by cycle headlight when driving. The problems are worst when on a shared use path where there is barely any separation between oncoming cyclists. The trouble is such narrow paths also require bright lights as they can be somewhat dangerous in the dark. I once got raked across the face by brambles hanging down and ended up getting some rather strange looks in the meeting I was cycling to.

Well I have been out for a ride – it as wonderful. Here are some pictures I took of the snow last weekend.

4cm of snowfall in the flatlands of East Anglia

Although it snowed for a long time the ground temperature caused a lot of it to melt away. So it looked very wintery, but we didn’t get any drifting.

Snowfall in the flatlands of East Anglia 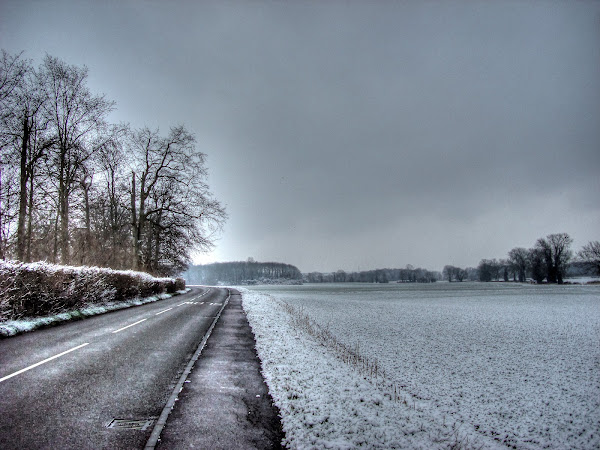 And now for a bath