Saturday, 26th April 2014:I like April – you can really start to see Spring, well springing. Mind you, the weather seems to have favoured the Oil Seed Rape, it seems to have flowered 3 or 4 weeks earlier that last year.

I usually try and catch up with the weeks happenings in The Archers, the misery levels seem to be increasing.  It is a good job that cycling cheers me up. I find myself feeling a little despondent at the end of a week’s catch-up.

Sill there is one good thing, knowing that I needed more cycling time to shake of the doom and gloom I extended my ride. The map is below and here is the Bike Route Toaster link. The loop distance (well two loops distance really) is 56Km/35 miles. It follows my “usual” radio ride of Low Fen Drove Way then across the fields (byways/bridleways)  from Horningsea to Lode and then along Lodes Way, but detouring via Upware on the way out. I cycled along NCN11 form Wicken to Barway via NCN11 and then back through Soham and across more fields (byways/bridleways) back to Wicken and then Lodes Way.

At this time of year some trees are in leaf and some aren’t. Along near Allicky Farm, the field was yellow and yet the trees were bare. 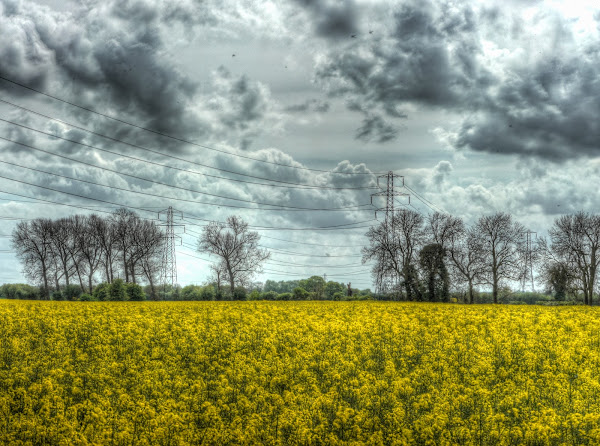 The Map of My Ride 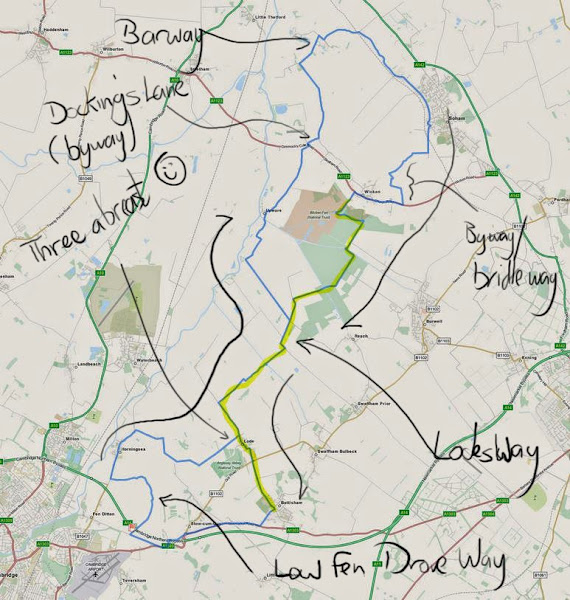 Closer to Lode and the same yellow fields and bare trees. 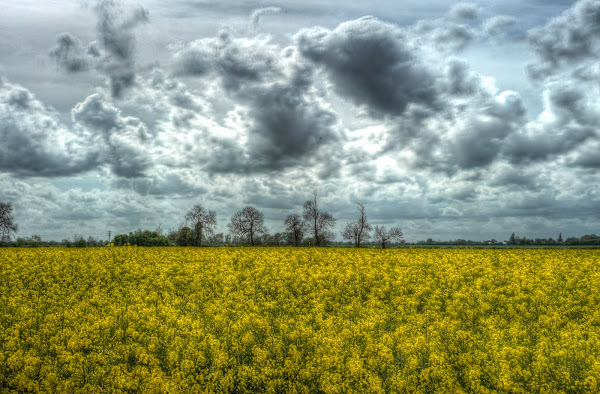 I reckon they are pretty confident cyclists (small one and all) the ruts and puddles on Harvey’s Droveway can be tricky – but if you are going to cycle with you family you want to be able to cycle together and chat about what you see. Which means traffic-free paths – free of noise and danger.

Given the benefits that the encouragement of cycling brings (more fitness, less pollution, less obesity, less noise etc) then there needs to be a strategy for cyclists at all stages of their life – form toddlers, getting to school, young families, teenagers,  middle ages, old ages.  I don’t see much evidence of joined up thinking in Government. Cycling isn’t all about MAMILS. 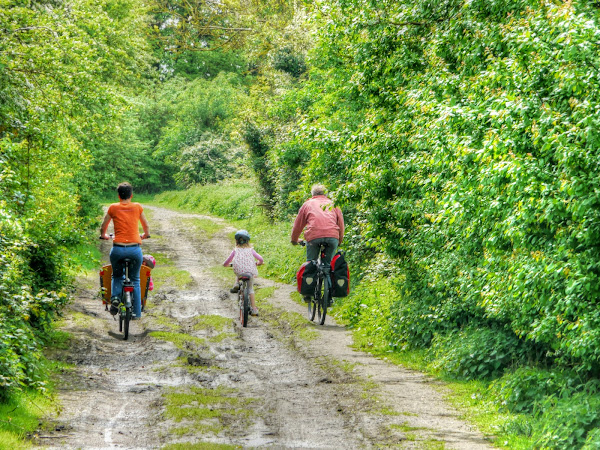 After that rant more of my ride. I carried on to Upware and then Barway, (recent scene of an arson attack on a car). when I can I tend to use Docking’s Lane to avoid cycling along Dimmock’s Cote Road. However if there has been a lot of rain then I tend to use the road.

For a change I cycle through the back streets of Soham across the railway line on Mill Drove and down Brack’s Drove. This is another route I would tend to avoid after lots of rain. I usually then cycle into Wicken Fen on Drove Lane, this time I slightly doubled back and then joined Horsefen Drove

This is the bit of the  bridleway/byway stretch that runs parallel to the pylons. Check out the blossom.

Blossom in the Hedgerow – near Wicken 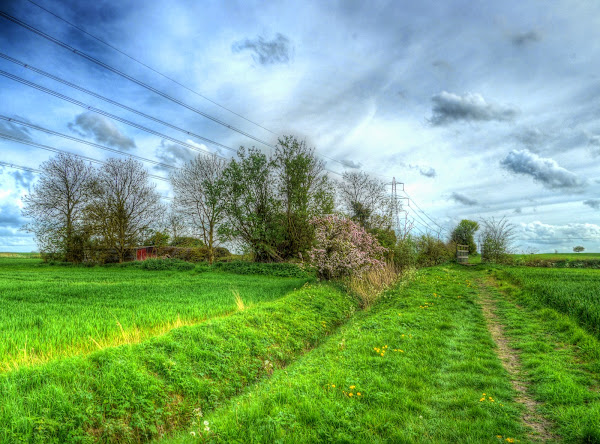 this signpost points the way to Soham and Burwell – I headed up alongside the pylons to the A1123. There has been a bit of chemical warfare waged on the weeds along the field margin.

The Path has its Wicken Way 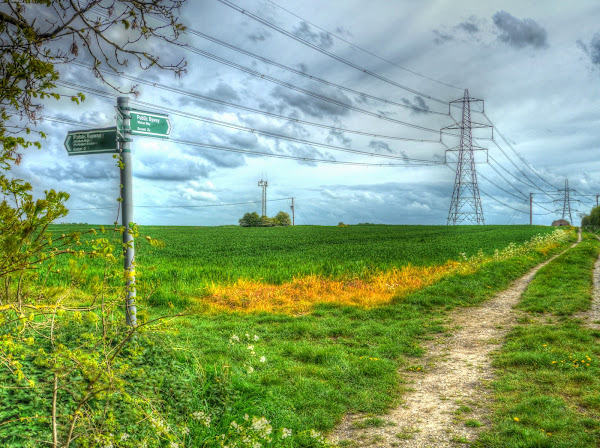 As I headed back along Lodes Way I took yet another picture of Reach Lode. I guess I have to haul my bike up the footbridge and having stopped it would be rude not to take a picture. 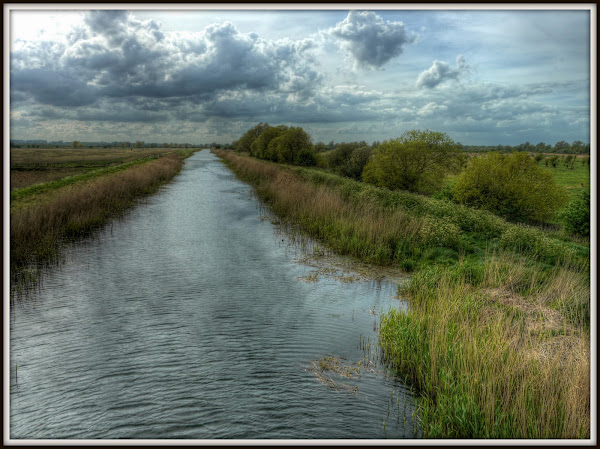 This is NCN51 just before the Quy roundabout. The route sneaks under the A14 by a small tunnel. What amused me was the rather bombastic advice “RIDE SAFETY Never ride more than two abreast”. Which if you applied it to the family cycling along Harvey’s Droveway would possible be more dangerous?

Mind you shared paths can be so narrow it makes be wonder are there no standards for cycling infrastructure, or are they just totally ignored?  On this stretch of NCN51 it is barely wide enough for one cyclist – say that one used to carry the youngster on Harvey’s Droveway.

The problem is that our planners are such conventional thinkers – cycling infrastructure to them means conventional two wheeled bicycles – what about all the other types of bikes from trikes to recumbent to trailers?  It really isn’t good enough.

Oops I almost forgot – yet another App to encourage cycling and walking ViewRanger with 38 CCC routes. 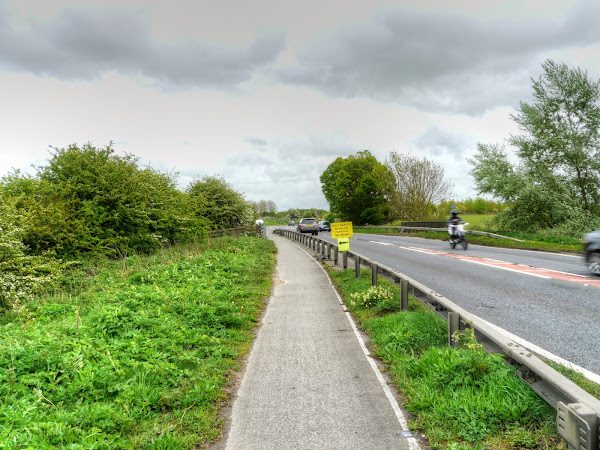