Getting back into the Cycling in the Cold

It has been just over two weeks since the finish of the Bangkok to Saigon Challenge. Things are back to normal, I have finished taking my anti-malaria medication. (I had to take it for 1 week after returning, the alternative medication would have required me to take it for a month after leaving the malaria risk area). My Longstaff (bicycle) is going in for a new headset on Friday - it was due to go in before the Cycle ride, but I just ran out of time.

On my return memories keep coming back to me - things that I had meant to mention in my Blog but had forgotten. The great thing about cycling through three countries is the contrasts it highlights. Thailand and Cambodia have their own different scripts, whilst in Vietnam they use a Roman script with accents to indicate the pronunciation. Vietnam and Thailand both have tonal languages whilst Cambodian is not. In Vietnam they use chopsticks but in Thailand and Cambodia they do not (or at least we were not offered them). They drive on the left in Thailand and on the right in Cambodia and Vietnam.

Another difference that I have been dealing with is that bikes set up to a US specification have the rear brake on the right hand side whilst in the UK we have the rear brake on the left hand side. The problem occurs when you need to stop in an emergency, after a few skids on the B2S Challenge I got the hang of it - I am now having to unlearn it on my UK specification bikes.

I am finding it very cold though, it is much harder to motivate myself to go out and cycle in the cold weather, especially when I end up cycling in the dark. I have managed just under 200miles/310Km so far since returning, but although I definitely seem to be slower my average speeds are not much different compared to the last week of cycling in Vietnam. When cycling along country lanes I tend to stop and start; for other traffic, for junctions and to take pictures. In Vietnam there were longer runs between stops which helped give an impression of high pace. You do get good sunsets around here though.

One reason it is cold is that the air is so clear. That is the moon on the top left. 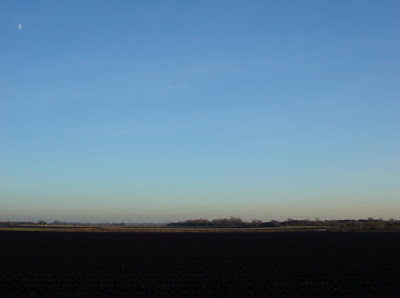 So far this year I have cycled around 15,600Km/9,750 miles, my target for the year is to reach 16,000Km/10,000 miles. This will be my highest annual distance so far. Over the last 5 years I have averaged an annual distance of 12,250Km/7,600miles, so this year has seen a reasonable increase. Having had the Challenge as a goal for some time has spurred me on. Although I have previously cycled (2003) from Land's End to John O' Groats over 16 days with an average daily mileage of 109Km, the heat and state of the roads was a bigger uncertainty for me. Actually I quite enjoyed the heat, after a few days acclimatisation, the dirt roads were tricky on some days though - there was one day when it was pretty gruelling. (We averaged 80Km a day over the 15 days cycling not counting the rest day). I signed up in March, but before that my brother was pushing me to commit and so have been putting in hours on the saddle and cycling on the green lanes and tracks around the Fens. Although the tracks round here were nothing like the dirt roads in Cambodia. It is good to have a goal.

One trick I learnt from Jim and Mary is that they always have the next cycle tour lined up ready - that way there is always something to look forward to at the end of a cycle trip. They are veterans of 20+ cycle tours to my two! So I have been checking out the websites they gave me and also looking in the CTC magazine. (UK Cycling and Campaigning organisation). One part of the world that has caught my eye is India - one trip involves sleeping (and of course cycling) at altitude 4000m+. The good thing is I am getting support from my family - it keeps me fit-ish.

The other thing I have been "researching" is what it would specification to choose for a bike that could easily be dismantled whilst also being lively and fun for cycling. I have been looking at titanium frames (Ti) with S&S couplings and a 14-speed Rohloff hub, front suspension and oh yes disk brakes.

I have also had my first puncture, the farm roads are covered in mud and grit here and, of course, I did not have a pump or patches as I have been riding my Marin Hybrid bike and had not moved the stuff over from my Touring bike. Fortunately I did pack that other important cycling tool - a mobile phone and my wife came out and picked me up.

Finally to contrast the B2S cycling with the Fens - here are a couple of bridges. 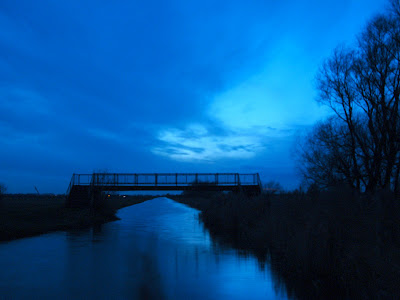 These two pictures were not taken on the same day, hopefully this bridge will be press-ganged into providing a new cycle path through the Fens. 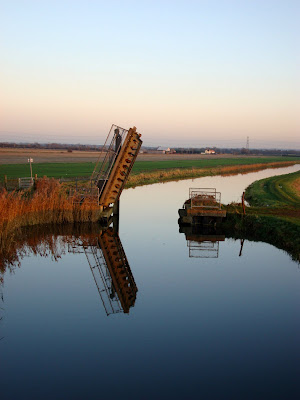