A Happy New Year to all who have gotten this far with my Blog. (and those that haven't as well)

As you get older the years seem to fly by faster and faster, but I am still amazed at how quickly 2009 has come by. I have gotten used to the cold weather again and although I have cut back on cycling during December I managed to hit my target for 2008 of 16,000Km/10,000miles. As mentioned before I am not the fastest of cyclists and amongst hard-core cyclists this is not a remarkable distance, however it is almost twice the distance I drove in 2008 and 6,400Km/4,000miles further than my previous years cycling best.

With the short winter days I find myself cycling in the dark quite a lot and just before Christmas was having problems with one of my bicycle lights, actually my best light. It is a USE Joystick - a rechargeable light, way more powerful than my best non-rechargeable light, yet much lighter and smaller. The company that makes them is Ultimate Sports Engineering based in West Sussex - http://www.exposurelights.com/.

The light is easy to clip to the handlebars of my various bikes, light - 105gms including handlebar clip and small (length of 102mm, diameter of 28mm). More importantly it had two power settings - high - with a burn time of 2hrs 20mins and low with a burn time of 7hrs 30min and could flash for ages. When working in London in the winter it was great for the ride to the station along country lanes and then for being noticed when riding to the office in London, it slipped in my briefcase during the day and was still good for the return journey.

I bought the light in 2006 so when it started rapid flashing after only being on for around 40 minutes I assumed that the lithium-ion battery was no longer holding as much charge and I searched on the the web for a replacement battery. I found two places that seemed to have offered them once upon a time, but no longer. so I contacted USE. Within 24 hours I got a response suggesting it might be a PCB fault and to return the light, within a week it was returned working as good as new, and in the run up to Christmas. That is what I call service - and for free as part of their 2-year warranty.

Father Christmas has also given me their latest update - Joystick MaXx-2 - brighter and smarter and even longer burn times. I generally carry two lights when cycling longer distances, there is no way I want to get stuck out in the Fens without a light. I tend to use the low setting when cycling around town and along cycle paths but use the high setting for off-road cycling and when cycling along country lanes. The problem with country lanes is that quite a lot of car drivers do not bother to dip their lights. When that happens it is almost impossible to see anything, even staying on the road is difficult. With the brighter lights car drivers do tend to dip their lights and even if they don't it is still possible to see some of the road.

I have been cycling around Wicken Fen in the dark this last week, which is great fun, although you have to watch out for the odd nature photographer in dark clothes walking along the paths. The other challenge is that the tracks are very slippery and rutted, in the daylight it is tricky enough picking the best routes, at night even with my brighter lights it is much more of a challenge. I almost had an unplanned dismount as one of the ruts I was cycling along was frozen and caused the handlebars to jink. I almost strained my wrist grabbing them back again.

Here is a photograph I took on the last day of 2008 in Wicken Fen, the sun had set but the clouds were lit by the sun beyond the horizon.

I did not manage to summon the enthusiasm to go out for a spin on New Years day - it was quite a late night the night before and the temperature is around freezing at the moment. I have been out on the 2nd and 3rd though. One of the other presents I got (Mother in law) was a new pair of gloves. They are made by a US company Specialized (http://www.specialized.com/bc/SBCEqSection.jsp?sid=EquipGlovesAll) and have an inner and an outer glove. They have been excellent at keeping my hands warm but not sweaty, I still find that I tend to put too many layers of clothing on in the cold weather and I have also been wearing leggings, I then end up sweaty when I get back.

Although it is cold at the moment it is not very windy and it has even been sunny so the skies are blue and it is great to get some exercise after the calorie overload of Christmas with the added bonus that there aren't so many cars around. Here is the sun setting earlier today (3rd). 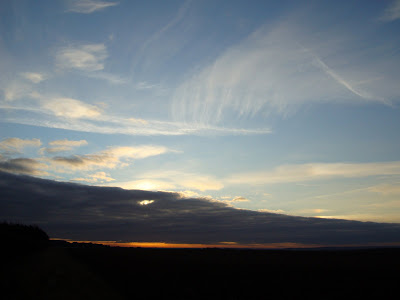 I cycled in the other direction today and headed off around the Stables surrounding Newmarket. It has the advantage of a few more hills but I am not so familiar with all of the roads so I took a somewhat circular route re-tracing my steps (pedals?) on one occasion.

As I set off I passed a pick-up truck parked on a by-way, rear end in. A couple of armchairs had been dumped on the trackand as I went by the driver started shouting abuse at me, it must have been loud as I could hear it over the Archers podcast I was listening to. He got quite excited, making me think that he had been the dumper. A little way up the road I did get a little worried that he might be inclined to side-swipe me as he went past and pulled in - as I looked round he was about half a mile back and on seeing me stop he stopped as well. Hum - not so good, I did wonder whether to get my phone out to use to video things. In the end I carried on and as he got closer pulled up on the banking. I should have taken his number plate. Since there is a County Tip around 8 miles away whoever did the dumping was pretty lazy and stupid and in the end causes problems for the farmers. 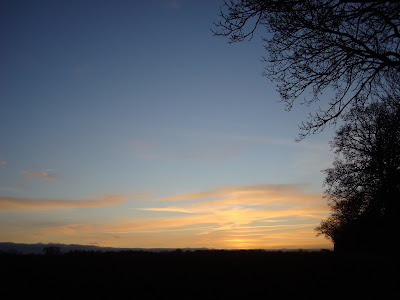 Nothing much else happened on the run, apart from stopping to take a few pictures. I am now using my Garmin Edge GPS whenever I go out - not to routefind, just to log the rides I do. Although there are are various ways of creating or downloading routes to it. I plan on using it to take me along roads/tracks I have not been along. So far it has been really easy and reliable.

I did stop to take pictures of the purple sky, it was only just bright enough and I had to put my camera on a fence and use the self-timer to start the picture taking to allow me to let go of the camera. This stops any vibration which can be a problem when the picture takes 3 seconds.

The heading of the blog mentions resolutions. I got to thinking about this when friend asked me about mine. In the past I have set myself goals - cycling from Land's End to John O' Groats was one and cycling from Bangkok to Saigon was another. It would be easy to do the same again this year - I have set a goal of 12,000Km/8,500miles of cycling for the year. However I am not sure this is in the spirit of setting resolutions. In my mind doing more of the same doesn't quite work, of course setting an impossible goal would be stupid as well. I do plan on another cycling trip in India either this year or next. (I have eaten curries in many of the countries I have visited, but have never been to India). This does not qualify as a "proper" resolution either, so I am using my cycling time to cogitate - I feel that it should be something that I want to do and will help me "grow" yes I know it sounds corny - but keep watching.
At the moment I have been using my Marin, but my Longstaff has finally been into Chris's Bikes (http://www.chrisbikes.co.uk/) for the fettling that was originally planned for November last year. Not only did Chris fix my bike he also cleaned it - again great service. (It went in for a new Headset) I still also plan on getting a Ti framed MTB for longer distance overseas rough track riding and have been researching my options.
One final mention of Christmas presents, when cycling long distances I like to take (and eat) Jelly Babies - well for Christmas I got some JellyAtrics - perhaps someone has a message for me!
Posted by Jme at 2:23 PM