With my clavicle healing I have been doing more and more off-road cycling, this keeps me away from motorists, who really don't seem to understand how vulnerable cyclists are, but also more importantly provides more of a shoulder workout. When cycling on rutted tracks you spend more time moving the bike around and there are times when you have to heave the bike over stiles - which definitely requires strength in the arms. I also think it helps to encourage joint mobility.

At the moment with the nice weather many of the tracks are actually quite dry and so easier to cycle on with relatively thin tyres, which means I use my hybrid bike (Marin San Anselmo) rather than my mountain bike (Diamond Back Ascent). The MTB is great for really rough tracks, but has much thicker knobbly tyres (26" x 1.95") compared with the Marin which has thinner tyres (700C x 26mm). I know I am mixing my measures but the knobbly tyres are twice as wide and have a significant - well knobbly - tread pattern. This means they provide good for traction on rough ground and on muddy tracks and cushion the rider against the bumps but when cycling on roads are much less efficient. so more effort is wasted when cycling compared with the thinner tyres without much tread pattern. When cycling on the road on my MTB you can hear a buzzing noise which is where some energy is being lost, most of it is in lost in heat caused by the knobbly bits moving around on the tyre though.

Surprisingly, well it was to me as a driver, there are loads of tracks around the Cambridgeshire area that you can legitimately cycle along. I do not mean the share cycling/walking paths - there are old routes that never quite made it to road status but can sometimes provide more direct routes which are definitely more pleasant than on the noisier busier roads. They often have quite a heritage as well - the Aldreth Causeway is one such route. Before the Fens were drained there were very few ways of getting to the Isle of Ely, other than by river or one of three causeways. The Aldreth Causeway is apparently the oldest of the three and was part of an ancient road from Cambridge to Ely.

The track probably dates from pre-historic times as there have been finds from the Neolithic and Bronze Ages. It also featured in attempts by William the Conqueror to oust Hereward and his men from the Isle of Ely in 1071. Apparently Hereward was able to wage a guerrilla war against the Normans (who apparently unsuccessfully used witchcraft at one point) but eventually were betrayed by the Monks who lived on the Isle who wished to change sides, Hereward escaped. How do I know this - well the route has a number of interesting boards placed along the path to interest and inform people using the path.

There is a "by-way" starting in Histon which you can cycle along pretty much all the way to Aldreth but on this occasion I picked up the track from near Rampton. As you go past on the road this is how you see the track, the first time I went along it I happened to be passing by and set off without being sure of where it headed, later on I checked out my route on the map and nowadays also have the benefit of GPS on my bike to highlight tracks like these. I am not quite sure why the route is banned to motor traffic over the winter period, perhaps because it will be more prone to wear and tear when wet? Although you cannot see it on the picture there are a couple of Traveller caravans just up on the left. I am always a little wary of dogs when cycling but have never had any problems from Traveller dogs, although I did once come across travellers with 5 or 6 horses grazing across the path. Agricultural areas such as the Fens used to rely heavily on itinerant labour to perform the labour intensive parts of farming such as harvesting. Nowadays that role seems to be filled by young people from eastern Europe. (On the Sustrans 51 route to Ely you pass a Hostel for such farm workers and there are signs in 6 or 7 different languages about the place.) Nowadays Travellers have a pretty raw deal getting moved along wherever they stop. 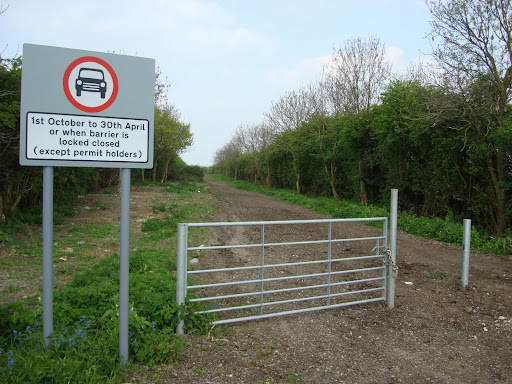 The path is not very rutted at the start although it is quite soft in places which can cause the front wheel to dig in, the best thing to do is transfer your weight to the rear of the bike - moving your bottom of the saddle to behind the saddle. This part of the path pass through an earthwork known as Belsar's Hill, a 12m-wide ditch with banking up to 2m high. According to one of the information plaques it is believed to date back to the Iron Age (800BC to AD42), it is privately owned so you can only look from the path though. 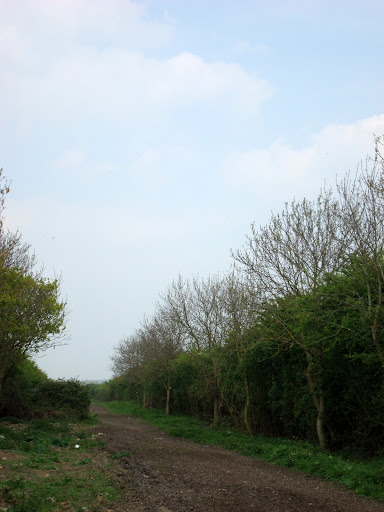 There are the inevitable Old Seed Rape fields growing along the path providing a blaze of cheerful colour and the Farmhouses dotting the countryside. This farm is known as Tibbits Farm. 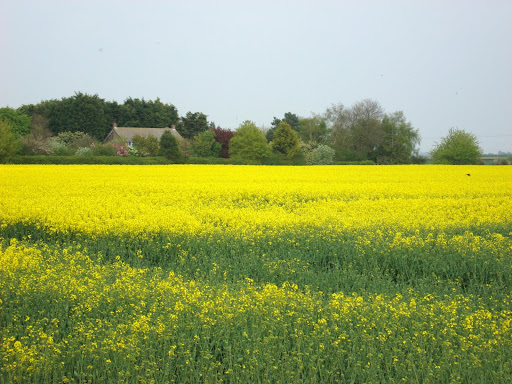 From the look of the track it does not appear to be heavily used by tractors, they tend to rut the pathway far more than this, it is quite wide though which probably helps it to survive. This picture looks back along the track 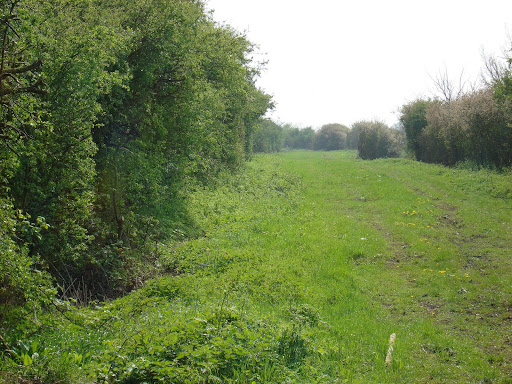 Looking forward you can see yet more yellow fields peeping through and occasionally the track will join a road before becoming track again. 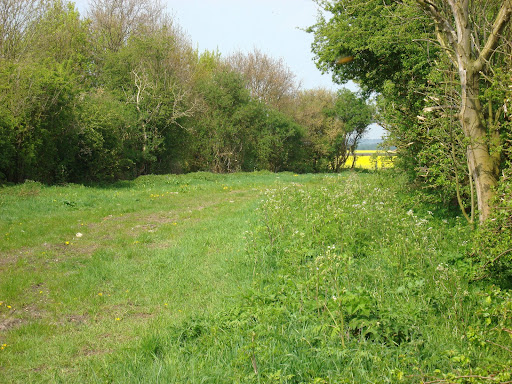 The first time the track crosses a road (Hempsals Road) it opens out and becomes an opportunity to take a more panoramic picture - this one was made up of around 5 individual pictures.

Back on the track proper it is much more rutted in places - it is an active agricultural route after all. At one point it passes over a small bridge and you can see Aldreth in the distance. I followed a tractor up this part of the track and passed two groups of walkers enjoying the Spring sunshine. 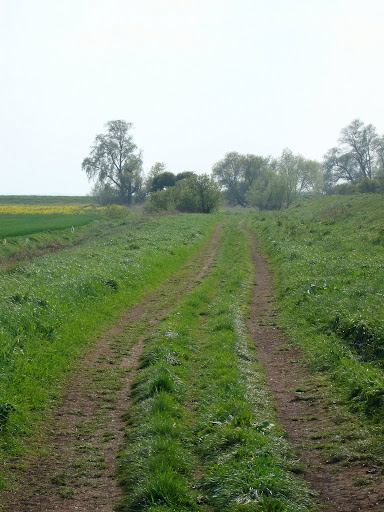 I also passed a field being irrigated, this slowly turned around - I did not hang around to see if it also moved up the field at all.

The route I took covered around 6Km/3.7miles which probably halved the distance if I had taken the road route, more important to me though was it was much more tranquil and required me to focus on cycling and not car/lorry avoidance. This Google map shows the track the straight line running from the bottom left the the top right into the small group of houses/farms which is Aldreth.

If you look closely you can see that the track first passes through a green field through the oval of Belsar's Hill. If you toggle the Sat/Map setting you can see Aldreth more clearly.