Tuesday, 22nd November: A quick post today as I am starting to fall behind in my posts again. Although unfortunately I have not been doing a lot of cycling this week so I should be able to catch up.

I also plan to get a few links off my Browser window as well – this is slightly old news, but it got both local and national coverage. Another story about a van getting stuck under the railway bridge at Ely and this one in the Daily mail about the hapless driver. Apparently there have been nine this year. I do wonder if we as a nation and no getting so used to being told what to do we can’t cope without it. Of course as a cyclist what worries me is a minor bit of inattention like that could have terrible consequences for a cyclist. There are quite a few signs and during the rush hour it can become quite busy as tall vehicles wait to turn off onto the by-pass over the level crossing.

This view looking back shows the build up of the queue.

As reported in this rather sad case, where an 85-year old driver hit some cyclists and carried on not realising what he had done.  The trouble is we have come to be so reliant on cars and the alternatives can be pretty difficult that perhaps some drivers carry on too far into the old-age. Certainly I know that when my father was alive it was a big decision, but he was able to make it because my parents lived near to my sister who was able to provide transport for them (for the inevitable things like hospital visits).

Apparently it is “Middle-class motorists (who are) hit hard as costs soar 14% a year”.  Personally I think there is an inevitability about it. In a bizarre way as cars cost more to run it makes it even harder to do without them as they suck up money that might have been spent on train fares or buses.

It is not just car drivers, here is a case of a school-run coach drivers who was photographed doing a SUDOKU puzzle at the wheel. That must worry parents whose children get a free school bus because their journey to school is considered too dangerous for walking or cycling. I was once in a Coach crash.  I used to work at a company who provided subsidised coaches to and from the factory. One very snowy and icy morning on a country lane as the coach slowed down it slid off the road into a small ditch and ended up leaning slightly. Another coach had to take us the last couple of miles or so.

I seem to remember when doing A-level economics that in normal supply-demand economics if the demand rises the price rises and vice-versa and if the price goes up then demand falls and vice-versa. I seem to remember that during the Irish Potato famine that as the price of potatoes went up then the demand increased. It occurred because people could not afford other foods because their money was taken up with potatoes so they ended up buying only potatoes. I’d forgotten the term for such a product but, thanks to Wikipedia, it is known as a “Giffen Good”. However according to the article what I was taught was debunked in 1984.

Apparently the EU wants to “end tax breaks on company cars”, there are favourable tax breaks in 18 member states. (Here is the paper if you are interested – the UK is in the list of 18 states – Table 5.12). It goes to show just in car ownership has become embedded in the fabric of employment as well as life. This seems unfair to me and of course promotes a status-quo of car ownership. (Yes, in the past I had a company car and didn’t turn it down.)

You sometimes see the phrase “war on the motorist” although the first hit I get is from a cyclist’s perspective. Well it would seem that it is a two-way thing. We now have “Disgruntled motorists BLOW(ing) UP fourteen parking meters in protest at charges”. Is tis rally a war?  Although I am not sure how they know it is disgruntled motorists exactly, that seems to be circumstantial evidence. The trouble is that at the end of the day it is just vandalism, plain and simple. We all end up footing the bill although hopefully they can get motorists to pay more (although many of us are motorists as well.)

So is the war escalating, with spying taking place. “Traffic warden ‘caught on camera relieving himself up a wall in broad daylight’”. So it is not just Councillors who have a problem – traffic wardens do as well.

Whilst I am having a rant about motor vehicles, here is a serious case of fly-tipping “One MILLION tyres covering 50 acres is found” – although actually theses tyres were collected with the owner hoping to sell them to China. (If you follow the link you’ll see that it is in south Carolina – and they have spelt tyre with the US spelling – tire.

The Cambridge MP, Julian Huppert has called for a “blanket 20mph limit across Cambridge”, which I support. It might also cut down on the number of speed limit signs rather than swapping between 20mph and 30mph all the time. I certainly feel there has been benefit along Mill Road, both when I cycle and drive along it. I do think that there also needs to be enforcement of that limit and I feel that at least for a first offence compulsory speed awareness training wouldn’t be a bad idea.

Speeding vehicles creates noise and pollution and make it difficult for the young, the inform and those pushing prams/pushchairs to cross roads and get around. So I feel that this can also improve the quality of life for all.  Here is a case where one house-owner was so fed up with speeding cars in his village he painted a 15-ft high 30MPH sign on the side of his house. That is big society eh.

Talking of big society – here is an interesting report of the Mayor of London’s promise to make “a London where children & adults cycle and walk to school or work and feel safe to do so”. Except of course if you read the Post that is not what has happened, and it would seem that the infernal combustion engine has priority in London.

Enough of that, I find myself often using meetings in Cambridge as an excuse to cycle. Today was not exception. I had arranged to meet someone for Lunch and recently have been to Reach and Wilbraham and Fulbourn.  This time around we met in the Robin Hood in Cherry Hinton.

I took a bit of a circle route and headed out along NCN51 up through the Newmarket Road park and Ride and then down Airport Cycleway. The only snag is crossing the road at the roundabout. I admit that I do get slightly irritated by cycle ways that are let down by the fine detail. The trouble is leading cyclists on to a difficult crossing makes us feel marginalised and I reckon is why there are some red-light-jumping cyclists. Treat cyclists as second class and they’ll behave in a second –class way. I know it is no excuse.

As sometimes happens, in fact more often than you might think, a car driver stopped to allow me to cross. It was a grey day and I struggled to see what I might want to take pictures of. Especially as I was needing to keep going, although not late.

I did stop to take a picture of this plan parked up where they test the engines. The big earth bank stops most of the propeller or jet wash, depending upon the type of plane. It is near the entrance to the Newmarket Road park & Ride and despite the bank you can sometimes get “hit” by the artificial wind. you also sometimes get a strong paraffin smell in the air.

This plane is a Lockheed C-130H Hercules, flown by the Royal Swedish Air force and here it is again. it sill surprises me how quickly you can find further information on a specific plane just by searching on the Internet. 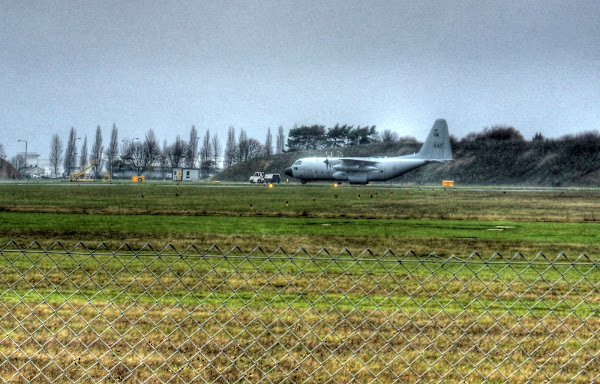 The view along Airport Cycle way. This isn’t the widest of shared-sue paths, however you don’t get many pedestrians along it.You go get cars parked up in the various gaps as plane-spotters wait for an interesting plane to come in. This airfield sees quite a wide range of different aircraft. 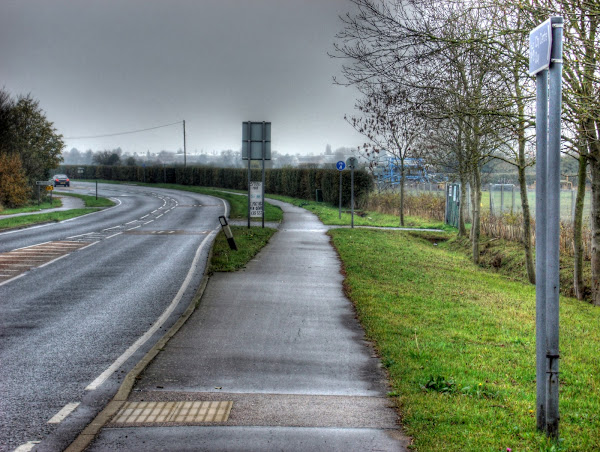 The pub did have some cycle parking, good and the Abbot was delicious (the bangers and cheesy mash was good as well). Before I parked up I took this picture looking down Cherry Hinton road at the traffic-light controlled crossroads.  I wonder if that cyclist is an RLJ? 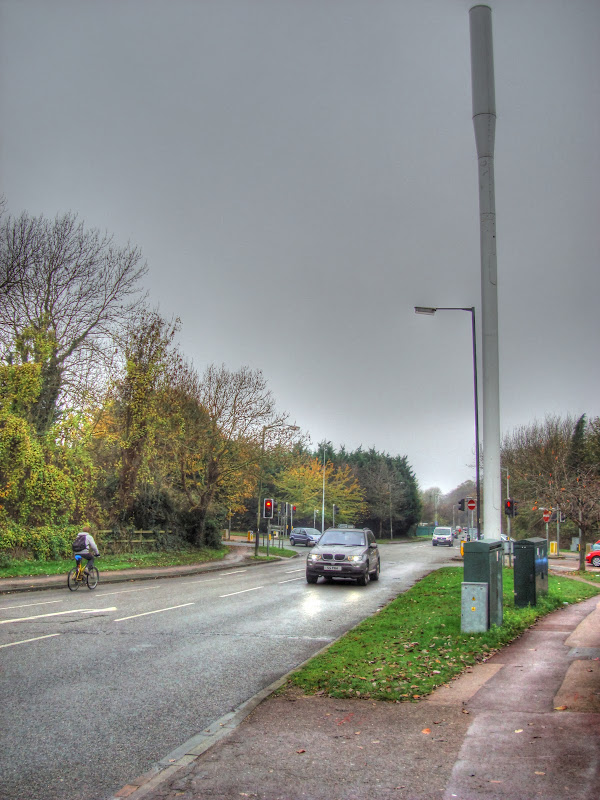 He does seem to be slowing down. 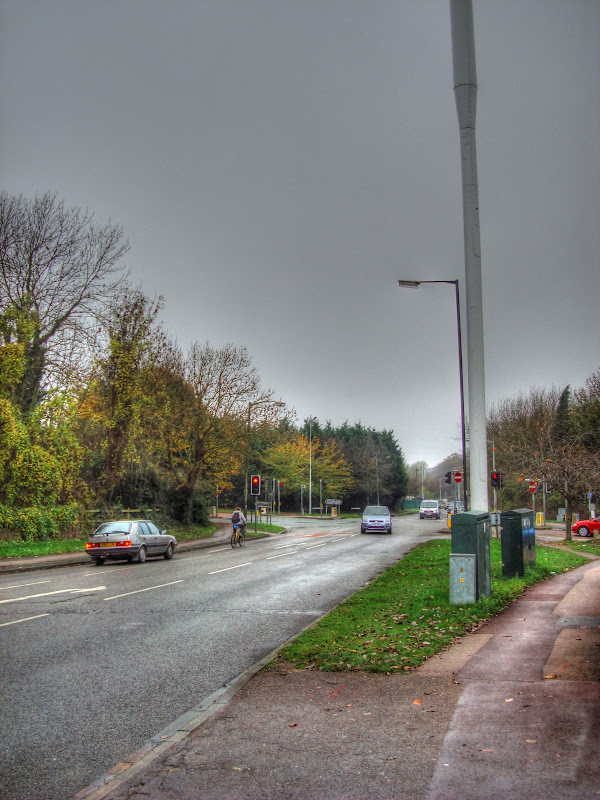 If you look closely he has gone past the red light but I can’t tell whether he is now cycling on the pavement or the road. 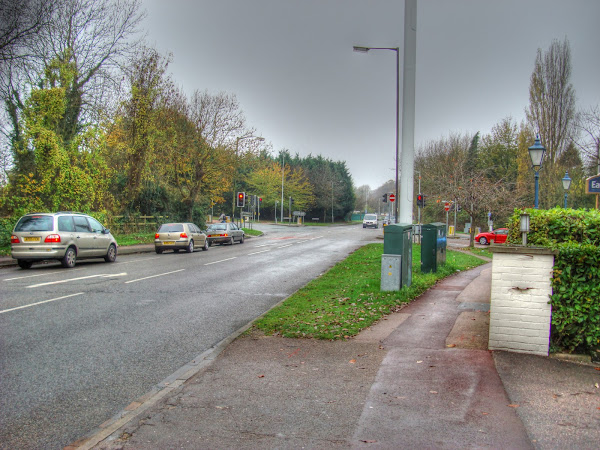 On the Streetview you can see that the pavement is shared-use and so although technically the cyclist might have been an RLJ he might only have cycled onto the shared-used pavement.

And finally, climate change, what climate change – well the baffling rise in temperatures that has left resorts in the Tirol and Salzburg regions somewhat devoid of snow. (yes I know that it might just be a random fluctuation.

And really finally – some amazing Streetview images from a Googler’s trip round the planet.