Thursday, 23rd February 2012: It is rather good to see so much positive attention being paid to cycling. As a cyclist it warms the cockles of my heart. Debates in the Houses of Commons with 70 plus MPs including thee ministers. The debate was led by the Cambridge MP Julian Huppert and indeed the Cambridge City Council voted to support the “Cities fit for Cycling” campaign run by the Time. Although fine words butter no parsnips as I tell my wife each time we have parsnips with a meal. This is the same council that reduced the role of a cycling officer from a 1.2 people to a half-time role in 2011. I would hate to think they are just jumping on the bandwagon and consider themselves to have created a City fit for Cycling. Cambridge has a lot of crap cycling with the Railway Station cycle parking leading the way as far as crapness goes in my view.

Apparently even The Guardian supports the Times’ Campaign. Although to be fair to the Guardian it has has always supported cycling and discussed cycling and cycling issues. They have an interesting and thoughtful piece on the Times’ safety campaign which even suggests that perhaps cycling is becoming cool. Mind you I don’t always agree with the Guardian “What makes Cambridge a model cycling city?” paints a romantic picture of considerate car drivers and bus drivers.  Believe me we do have inconsiderate motorists try cycling through Cherry Hinton’s traffic calming and so how often cars routinely squeeze you to the kerb when the cycle lanes idiosyncratically disappear. What’s worse they do it without even thinking about it.

Well lets hope that all these fine words turn into buttered parsnips – CTC urges the Transport Secretary to turn debate into action. Perhaps the Bus funding cuts are the Cambridge County Council’s way of encouraging more people to cycle.

So are we heading for another golden days of cycling? Check out the third picture of this Daily Mail piece on the Amish – bare-foot on a scooter ( and I don’t mean motor scooter) that is a bit to retro for me I think. Whilst looking for references to the recent MP activity I also found this article – “MP stopped by police on suspicion of being a terrorist – for taking photos of a cycle path” in 2009 – those certainly aren’t the golden days.

No the golden days, for me mean a time when cycling was part of life. You got to work by bike, you went out in the evening by bike. You certainly went out with a few friends for a jaunt in the countryside when weather turned fine – stopping at a cafe for an energy re-fill, bikes piled up outside the window. Like this picture – which I took This week, on Thursday.  I used Picasa to alter it a little bit – but there really were a bunch of bikes outside of the Greggs shop in Newmarket.

It was a warm day, Spring-like reaching 16C when a young man’s head turns to fancy and an older bloke decides he needs a hair cut. I was off for a hair cut and because my hairdresser is not too keen on a sweaty bloke turning up I drove and as I walked past this lot – I wished I hadn’t   When I got home I bunked off work for the afternoon and went cycling 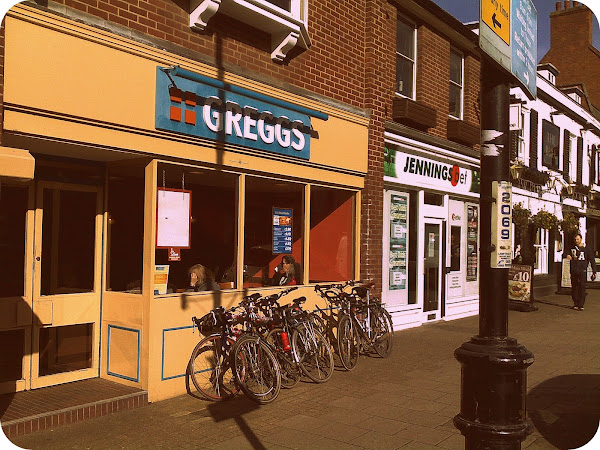 The good news is that even if you do get involved in an accident as this article suggests we are blessed to live in a Country with excellent emergency care (compared to the US). Those halcyon days really might not be as far away as we think. Although if it turns colder again then we might do well to copy these Japanese baby monkeys and have a hot bath (after cycling natch.)

And finally, as I do seem to link to quite a few Cambridge News articles on their website I should let you know that they have won a “best website in region” award.

So here is a link to the latest on the Cambridge News Cycling Blog – 33 – about the A14 and 32: Have things changed?.