Thursday, 23rd February 2012: As I mentioned after getting my hair cut over lunch and finding it incredibly warm and sunny I couldn’t resist getting out on my bike for a ride. So I bunked off for the afternoon. Well I have been stuck inside a bit too much this last month or so – that’s my excuse and I am sticking to it. In fact the weather was so warm I went out in shorts and a much lighter jacket.

I was also able to check out my new light-weight configuration.  I hate having my hair cut, it goes back to the days of being a young lad and having no control over the results when my mum used to take my brother and I for a back to school haircut. I am not sure whether my mum had any control either – it was more what my hairdresser was able to deliver – one size fits all.

The result is it put me off for life, although things have changed hugely. Nowadays the places are much nicer, the people are more pleasant and my stylist listens to me and does an excellent job. I always come out feeling good. But the early “trauma” means I tend to put off getting my hair cut for far too long –so I go from relatively short, easy to deal with hair to a straggly, wavy mess and end up looking like a mad professor. I am certainly no professor.

One of the reasons I go to Newmarket to get my haircut is that I trust the person who cuts my hair.  It does mean that I must be grams lighter though – although I am not a weight-weeny really. I carry quite a lot of stuff on my bike, including several spare inner tubes, patches, zip ties, multi-tool, pump, tyre levers, hand cleaner, loo roll (another multi-purpose tool) and various other odds and sods as well as a camera, mobile phone and GPS. Whilst my cycling is not extreme, over the course of a few months the bike does take a bit of a battering and bits do drop off or break unexpectedly and even with Schwalbe Marathon plus tyres I do get punctures.

For me punctures are my way of deciding when a tyre needs replacing. The tyres get pretty battered and so prone to punctures before the tread has completely worn away.  Although the weather was warm and spring-like the byways and bridleways are still a bit soggier than I would like so I stuck to an old faithful ride to Wicken Fen along and around the Lodes Way.

The map is below and as you can see I did check out a track or two and yes they were pretty muddy. Here is the Bike Route Toaster link, the ride was 58Km/ 36 miles, flat and if you don’t like cycling through a layer of sticky mud I would give the muddy track loop a miss. I am looking forward to getting back onto the byways and bridleways again though. 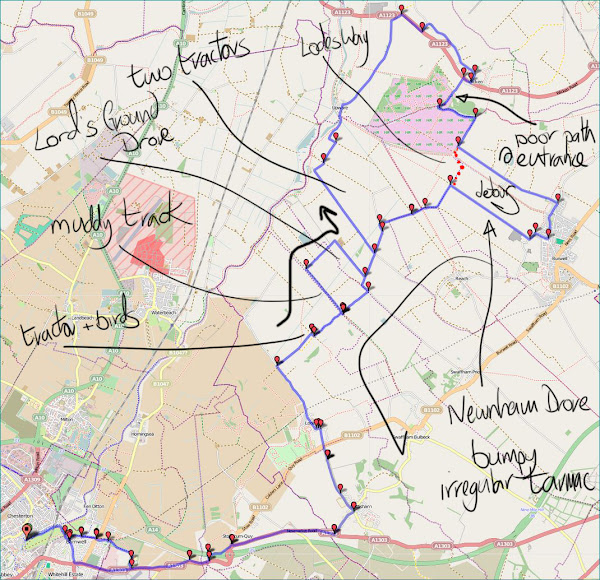 Although I set off thinking I wouldn’t be taking many pictures in the end there were enough that I have split the post into two lots and I didn’t start taking pictures until I got to Lode. and that was on  the other side. This patch of Snowdrops caught my eye although judging by the mass of car in the Anglesey Abbey car park the Snowdrops there must be pretty spectacular. This is near where the Cambridge to Mildenhall railway line used to cross Bottisham Lode. 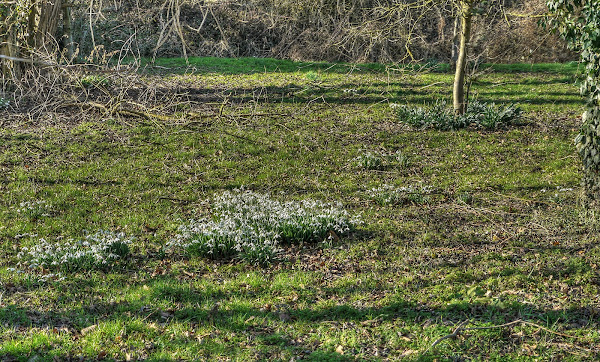 The trouble is once I take a picture then I can’t stop the fine weather must have gotten a few farmers out ploughing. This is the view of the fields across Bottisham Lode from Fen Road. Look at that bright shiny object in the sky – even with HDR it was so bright that reflections were cast all over the place and so end up as splodges over the picture. 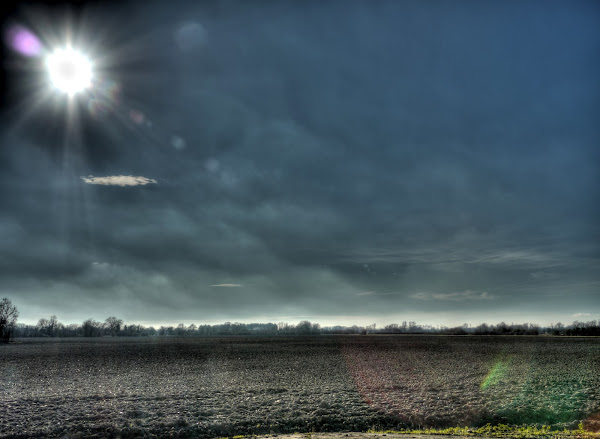 I then cycled through White Fen where just across from the balancing pond where a flock of seagulls. I though at first they were following a tractor ploughing. I stood on one of the picnic bench seats to getter a better view and as soon as I got my camera out they stopped flying and settled down. 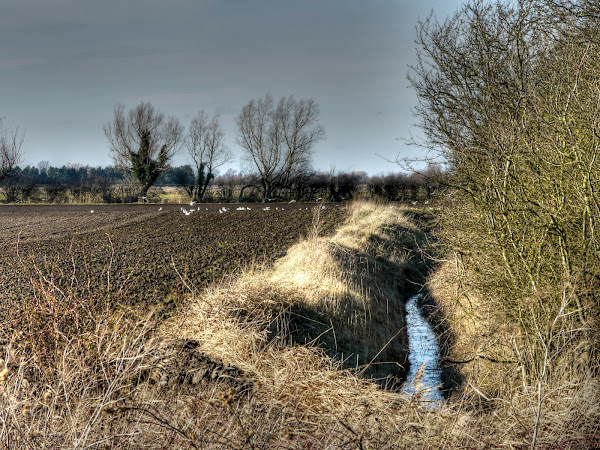 Mind you as I stood there a cyclist went past. That is what cycling is all about – no Lycra, no helmet – a jacket and cap and enjoyment.  Just get out and cycle – that’s what I say. Whether it is fresh air, exercise, time for reflection, countryside, camaraderie  or myriad other reasons. Cycling just is. 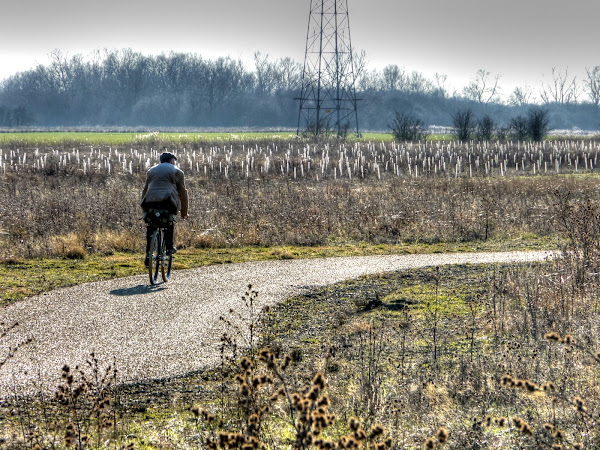 This is the tractor I mentioned earlier -  drilling the field, the seeds must be what was attracting the birds.  Although I didn’t take a picture I did come across some seed that had been spilled over the road on my travels, it was orange. Reading that last link it mentions that the seed is treated with a “seed dressing” to prevent soil borne diseases form infecting the plants. 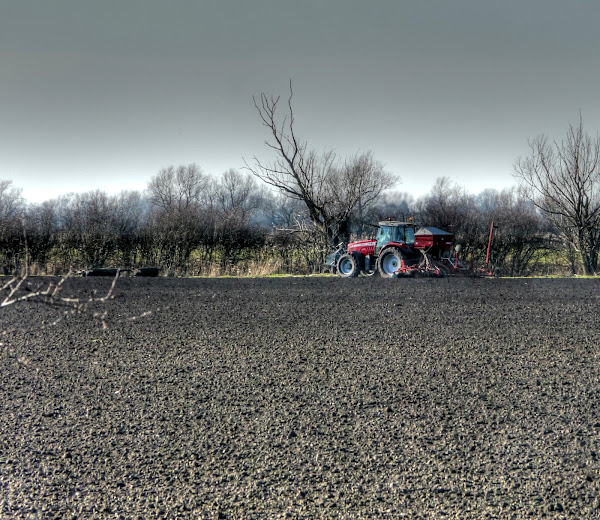 A close-up of the drainage ditch alongside the field – despite the drought the ditches still run with water. 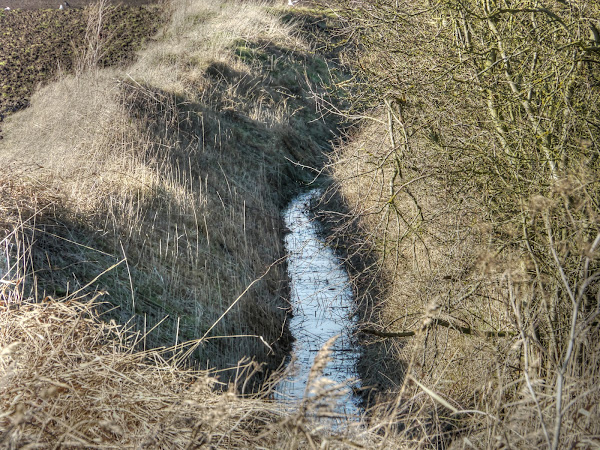 I then detoured from the Lodes Way and took the byway alongside the Swaffham Bulbeck Lode up to Lythel’s Farm and then round back along Lord’s Ground Drove. At this time of year with the rain and the activity in the fields you can expect a but more mud around, as you can see from the ruts. This leads onto the tarmac road past Lythel’s Farm. 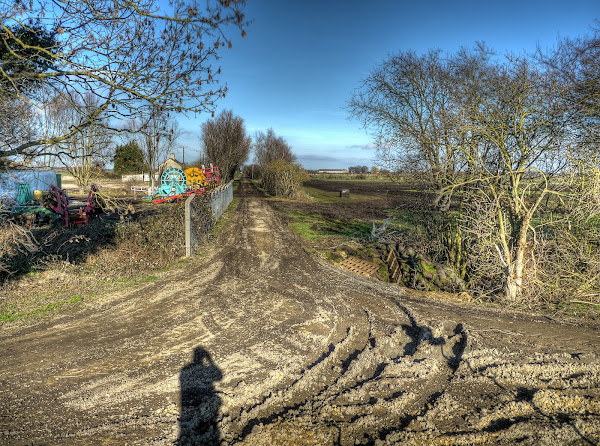 That is the byway alongside Swaffham Bulbeck Lode, looking back towards the Lodes Way bridge. 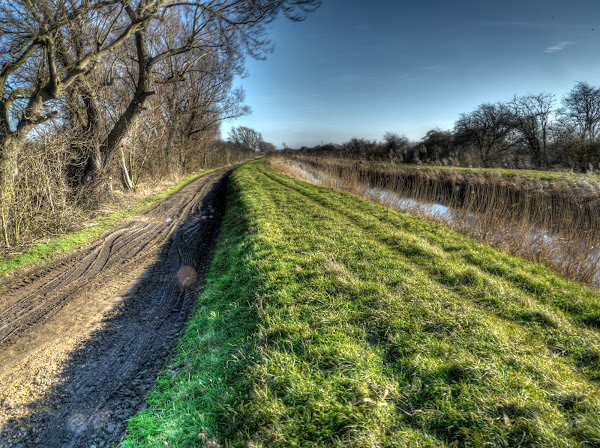 This is Lord’s Ground Drove it reminds me a little of the Brecks – with the pine trees leaning. It suggests that the prevailing winds blow west to east, or perhaps the work in the fields to the right loosens the roots on one side of the trees as the trees on the right-hand-side of the road don’t seem to lean as much. 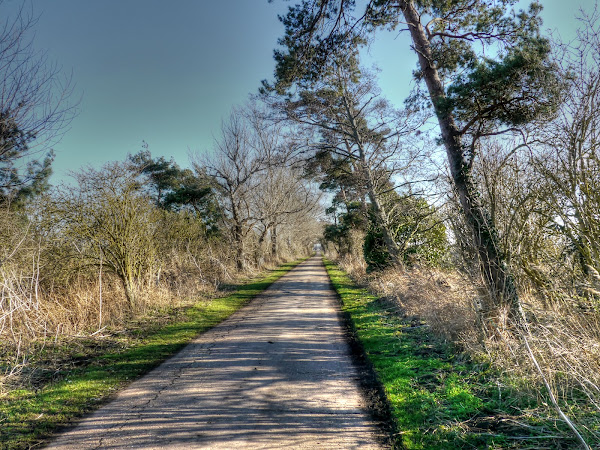 As you can see apart from a few small spaceships clouds in the sky the weather was glorious – the contrast between the black peat soil and the light sky was quite marked.  The funny lines are stalks in the very near foreground that I didn’t really pay attention to when I took the picture. 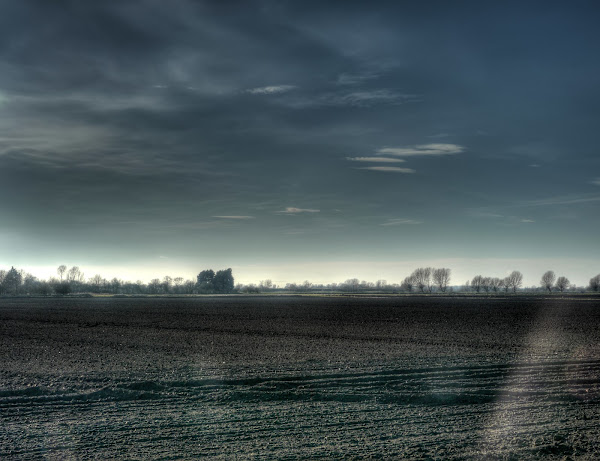 On the other side of Great Drove (heading towards River Bank) there were more busy farmers – in this case ploughing and drilling. 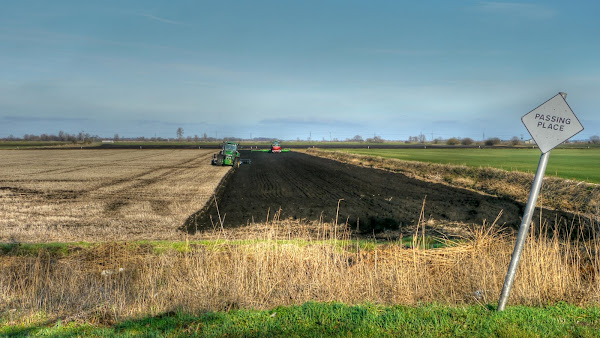 As I cycled up Great Drove I stopped for some passing traffic, this is a single lane country road with passing places and when I am on my bike I do tend to stop in passing places. It is more pleasant than having a car whizz by at high speed centimetres from my handlebar whilst I am centimetres from the edge of the road.

One of the vehicles was another tractor towing some equipment. I seem to remember it being some sort of wide harrow and the sides were raised and folded. even when folded they extended over each side of the road – I had to move off the road a reasonable distance.

This is a view looking towards Swaffham Bulbeck Lode – which is behind the raised banking – it shows how much higher the drainage ditches are than the land which has shrunk over time. I presume the shrinkage is both from the soil being blown away and through the cropping. Quite a lot of turf is grown around here which must also take away a couple of centimetres each time turf is lifted. 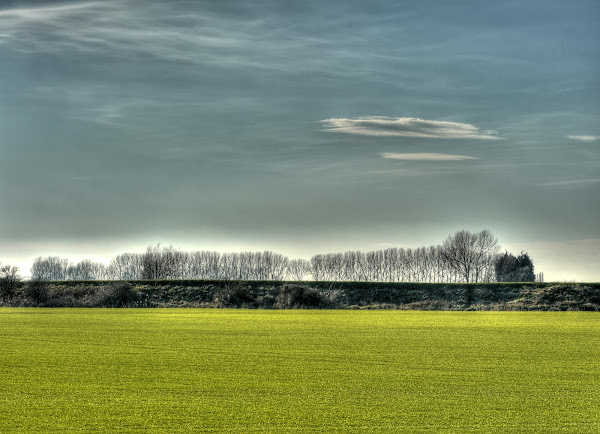 On my way through Upware there were some new road markings – your starter for ten is what do these lines mean? According to the Highway Code pdf on road markings it is an edge line and marks the edge of the road. I don’t know quite what the legal significance is – in fact there appears to be none, unless they are part of an MCL and these aren’t. 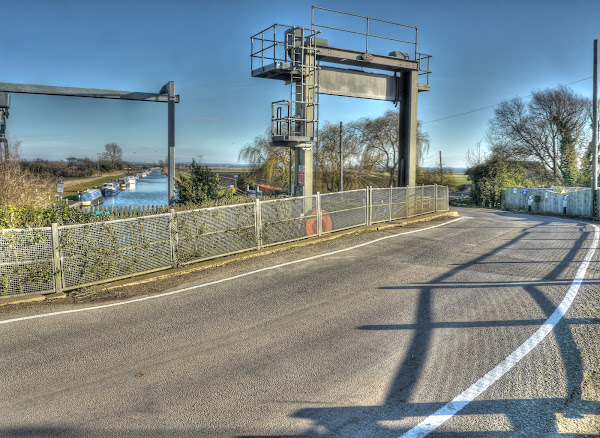 After  surviving the very bumpy first bit of the NCN11 route as it goes past Wicken Fen the track becomes much more reasonable. Although after the snow and flooding there is quite a bit of sludgy mud so take care, especially when cycling with children. After Norman’s Bridge which takes you over Monk’s Lode the path returns to a decent cycle-able path – although it is a pity it is a bit thin. It s fine in when there is nothing else about but can be tricky to negotiate when there are people walking dogs not on leads.

Having said that I passed a chap with an unleaded dog – he stepped onto the grass and brought the dog to a sitting position well in advance of my getting there. I slowed down just in case – said thank you and we were both happy. 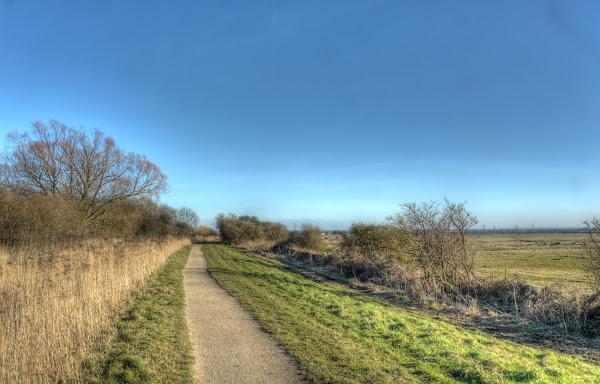 As you can see the sky was a glorious blue and with the sunsets getting later and later – yahaay, it looked like I was going to be way to early to get some sunset shots even with a detour or two.