A Swarm in May

An out of sequence post this. Yesterday I drove to a meeting, which is shameful as it was on the outskirts of Cambridge and easily reachable. It was important enough that I didn’t want to turn up a dishevelled mess though.  It is possible to cycle in decent clothes and avoid the mess scenario. I rarely get oil from the chain on my trousers, except when I really could do without it.  So I drove and thought – what a glorious day – I should have cycled…. Mid afternoon the meeting ended so I headed home.

Well I sat in my car aka The Squealing Pig aka Landrover Discovery to find that the air suspension had dropped to its lowest setting. Now I have a long journey coming up so the last thing I need is dodgy suspension (and it has had dodgy suspension several times before – during the warranty). After a drive around it pumped up, but to be on the safe side I popped over to Marshalls Landrover. They suggested seeing what happens overnight and although they are full and wouldn’t really be able to schedule a repair they would have a look at it.

So I headed home and my wife pointed out a load of insects flying around in cycles over the trampoline. I know that Heathrow suffers from congestion and planes have to circle, I didn’t realise that trampolines had similar problems. I assumed that the glorious afternoon heat wave had cause a load of flying insects to hatch after being delayed by the cold Spring weather.

A little while later my wife cam back as I sat working – those insects were bees and they were swarming.

Bees Swarming on a bush in May 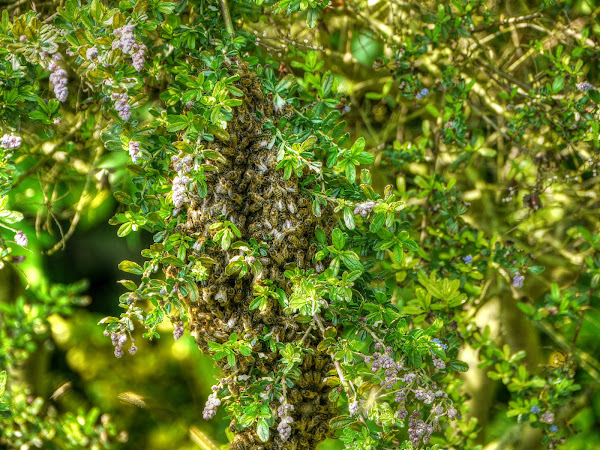 So I went out to have a look and indeed they were. Here is the shrub they are on – it is quite well camouflaged isn’t it.

Can you see the Bee Swarm in May? 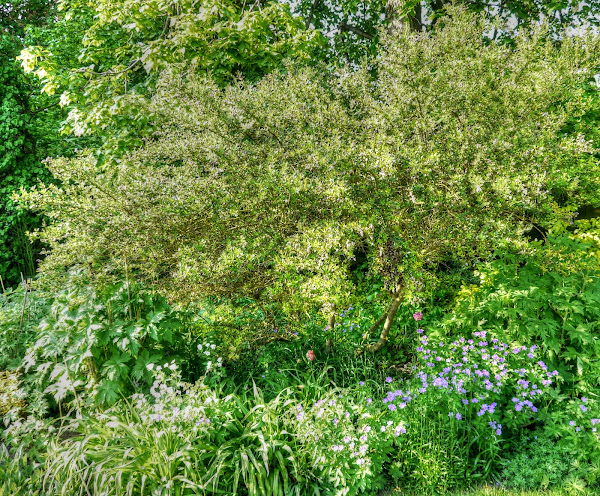 As it happens I remembered seeing something in a Newsletter about a chap who had moved and lost his bees in the move. So rather than call out a Pest Control company I gave him  a call. These were honey bees although I think we just assumed they were rather than thought about it.

Apparently you either have to leave bees where they are or move them a reasonable distance otherwise they will return to their first location. Although when they swarm hopefully it is a different matter.

The chap turned up and indeed they were honey bees and although they were docile, discretion is the better part of valour, and so he suited up and opened his box ready to take the swarm away.

Preparing to remove a Bee Swarm A snip with a pair of secateurs and the swarm was “mobile” and he gently popped them in the box.

A Swarm of bees being boxed ready to take somewhere suitable 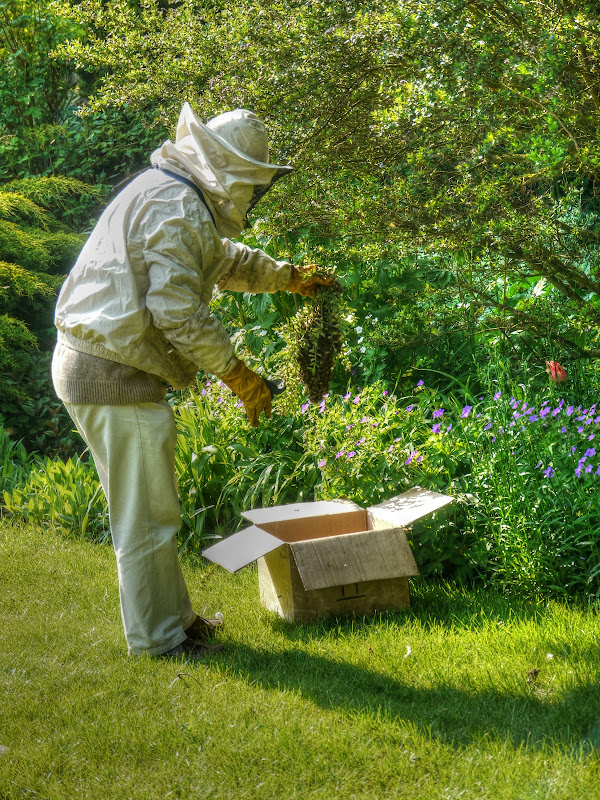 After boxing the bees he left it for a while to allow as many bees as possible to gather and then sealed it up and drove them to their new home.

He also mentioned that pest Controllers generally don’t destroy swarms but do get in touch with local beekeepers.

Oh and the suspension on the Squealing Pig – it was ok this morning, so fingers crossed. I will take it out again tonight though.