A Swarm in June

Thursday, 28th June 2012:  (UPDATED) This is a short, one of two out-of-order posts, partly because I have got a presentation to finish and partly because the second one is a sombre but important message.

Anyway here is the first one post. Mid-morning we noticed that there was a column of insects flying around in the garden. After a short while they started gathered and formed a ball around a branch on a tree (a walnut tree as it happens). I have not had a bee swarm form up in my garden ever, before May this year (A Swarm in May) and almost like buses we get two.

At first they were pretty lively but as you can see they settled down. Whilst the idea of bees swarming around my seem to be the stuff of horror movies – actually they didn’t pay us much attention. Mind you we also didn’t go and poke at them either.

We certainly didn’t feel the need to cower or feel “Bee-sieged! The terrifying moment a buzzing swarm of 3,000 bees descended on florist as worked cowered inside”. Although my son did get stung the last time we had bees visit when getting close to get a picture. One landed on his arm and he brushed it off without thinking.  It was his first ever sting by a wasp or bee and he wasn’t too bothered. He reckons it was less painful than being stung by a jellyfish.

A Swarm of Bees in June on a Walnut Tree 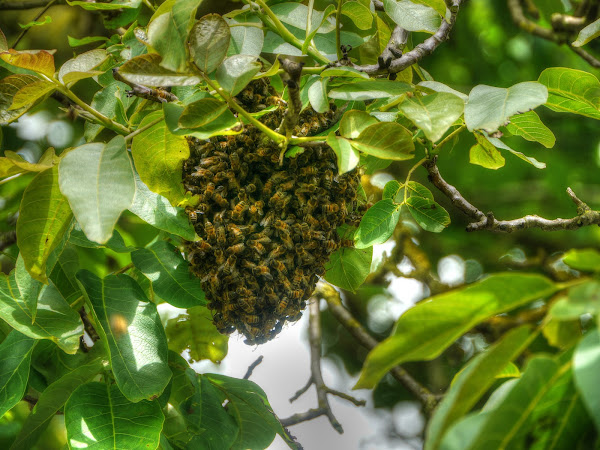 I have no idea how many bees there were, but assuming the dimensions of the “cone” are a radius of 10cm and a height of 25cm , then the volume of the cone is:

Whilst I reckon that the volume of a bee can be estimated as a cylinder of 10mm long and 4mm radius.

So the volume of a cylinder of that size is:

But let’s assume that packing density is half that (each bee occupies twice the space, so the number of bees there is approximately:

Well it is an estimate, but higher than I had expected. Although it would seem to be quite a small swarm and smaller than the last lot.

A Swarm of Bees in June on a Walnut Tree 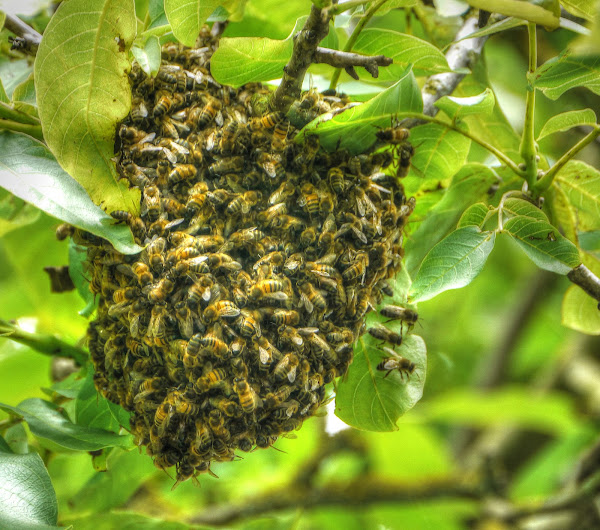 So this time around I rang the chap who collected the last lot. It was going to be a little more complicated to collect this lot because the swarm was about 4m of the ground. So we would need a step ladder and probably some long pruning device. So he could climb the step ladder to catch the bees which would only drop a small height. I could remain somewhat more remote. We decided to leave it until the evening so that the bees would have gathered more.

However at around 7pm the bees had “decided” to move on of their own accord. It is good to to see such bee activity though. One of the reasons we think we have seen bees this year is that we planted a small patch of ground at the bottom of the garden as a “meadow” with wild flowers (the seeds we sourced from a proper supplier).  (The “meadow” idea was supported by the veg and flower gardener (my wife) and the grounds man who cuts the lawns (me) as a way of cutting down the amount of work needed as well as providing a wilder environment.

A patch of wild flower garden 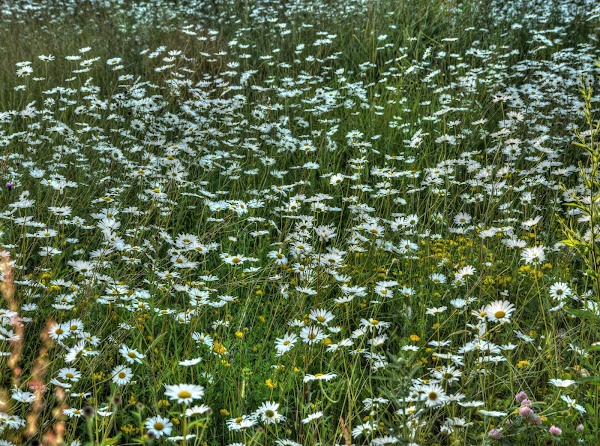 At first it looks like Ox-eye daisies, but on closer inspection it has much more diversity from clover to vetch to ragged robin. The one in this picture is not one I recognise though.

UPDATE After writing this and posting it  I then read about the Field of Dreams wildflower meadow in Somerset in the DM, now that's a meadow.

A patch of wild flower garden – an as yet unidentified flower 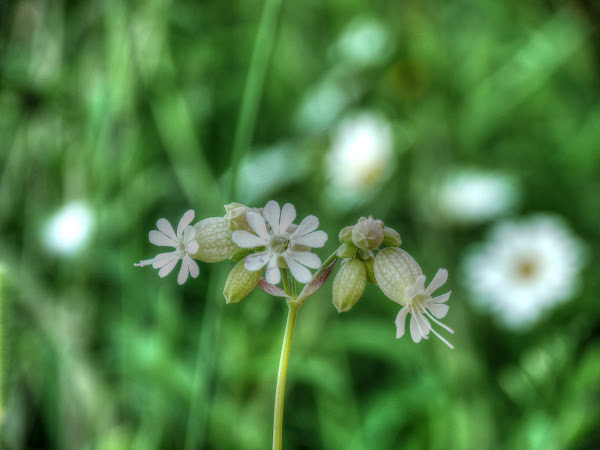 The other reason I think we have had two swarms is that patches of wild flowers are far and few between. We see flowers along the verge and assume that is diversity – well not necessarily and even when people go to the trouble of planting up verges they get mown. “Verging on careless: Council workmen decimate roadside flower display by mowing it down after if had flourished for 10 years”. Check out the before and after pictures – hardly a safety hazard, but I guess verge cutting is put out to tender and it is difficult to pay special attention when contracted out.

Also note the use of decimate, its origin goes back to Romans times when it meant to punish one man in ten, in modern terms it now seems to mean to an extreme reduction. I must be showing my age here – and yes when I was a boy at school Latin was compulsory and I gave it up as soon as I could.