I woke this morning with a feeling of anticipation and some trepidation.  My plan was to do a double check of the connectivity and then power the computer up. The trouble is what do I do if there is trouble. In the past I would start using a ‘scope or logic analyser.  Things have moved on a bit since then. In any case I don’t have either bit of kit or quite now where I would start.

Some additional questions have also sprung to mind, will the computer sense whether the on-board graphic system or the card I have plugged in is the place to output video?.  It will be tricky working out what is going on if I can't see anything.  I will first power things up with the sides of the computer off. Most PCs make a beep when they power up. This comes from a small internal speaker connected to the Mobo. One beep is good, other patterns give a clue as to what might be the problem.  The case and Mobo I have selected don't have them though. Although the Mobo does have a connection for a debug speaker. So I might see if I can salvage one from an old computer I have. Or maybe even just wire up a small speaker.

The diagram of the Mobo on Chapter 2-2 of my manual shows the Mobo Overview and labels the back panel USB connectors as “Lan3-12” it should be “USB3_12”.

My Haynes manual, suggests that the video will come out on the Video Card. It has also cleared up the issue of when to load the various Drivers, after the O/S. Which is semi-obvious – I suppose.

I have also read somewhere that you should load the O/S with the HDD disconnected, otherwise the installation will load it onto the HDD in preference to the SSD. My plan is to load the program's on the SSD and install my own working directory there with all the rest of the data on the HDD. There are ways of using super-links to fool the OS into going to another disk. However For me the main things I want to locate elsewhere are the various data sets: music, pictures, cycling data (Garmin) and email are probably the most relevant. That way I will be able to simplify my back up strategy.

Other things that slightly worry me is hanging on to the Google face data when I move stuff around.

I have checked the cabling and in the process moved one or two of the cables around.  The HDD drive's SATA data connection stuck out and might have fouled the side panel.  I might still do a bit of re-routing, but before I zip-tie the cables I reckon I'd better power it up.

So I have cabled the PC up, power, keyboard mouse and network. When I switch on the PSU power supply – a little green LED standby light come on on the Mobo – and no smoke. Well that can’t be bad – although it will need to do a bit more than that.

Here are my notes:

Right now to power up my new build. First job is to strip off the protective covering from the case, otherwise the fans won't be able to breathe.  Then the next job is to connect it up to the monitor, keyboard, mouse and power!
I will connect these to the USB sockets at the back and am wondering whether to get a couple of extension leads for for the keyboard and mouse to simplify the cable runs.
The plugs go in through the I/O plate ok.
Now to connect the display. Can I use the old DVI cable?  Not sure - will try it. I do have a VGA cable in case of problems. I might also have to resort to plugging it into the Mobos graphics system?
Mains cables now connected to the Monitor and to the Computer.

Sequence (from the Haynes Manual)
Monitor on.    Message entering power save
Mains on for Computer PSU.        As expected nothing
Computer PSU switch on and look to see if the PSU connected fan comes on
No it doesn't, but the Mobo Standby LED comes on.
Computer power button
All connected case fans come on, front, rear, back and unexpectedly (for me)  the CPU fan. The DRAM LED briefly flashed red? Then went off and nothing appeared on the screen

My New Computer in Standby 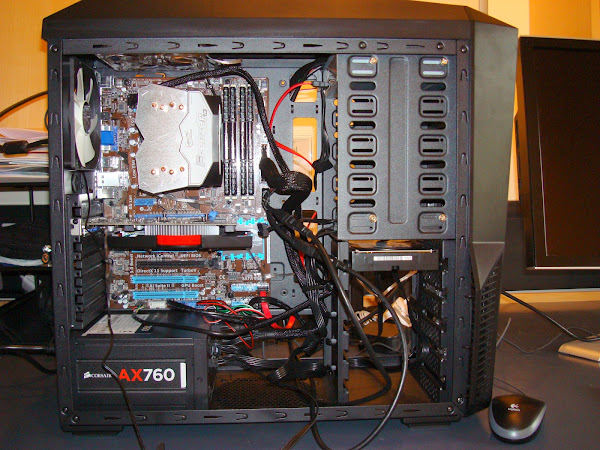 Sequence (from the Haynes Manual)

So the fans spin and the blue LEDs come on, no smoke, the DRAM LED cycles though red and then goes out -  is that good or bad. Well I know that not being red is good but no picture. Oh drat, what on earth do I do now.

My New Computer on, fans spinning – but no picture 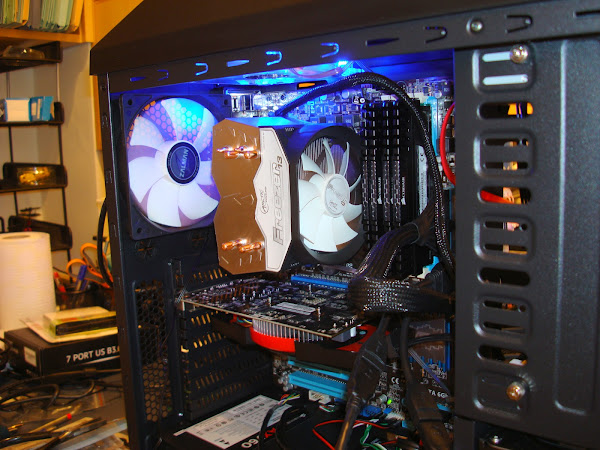 Here is the same shot but with a slower shutter speed – just to prove the fans really are spinning.

Should I dig out a small speaker and connect it up and listen for the beeps? In one of the many web reading sessions I remember someone complaining that they couldn’t see the BIOS screen on the DVD-D output as it was configured. So I dug out a VGA cable.

My New Computer on, fans spinning (slower shutter speed)  – but no picture 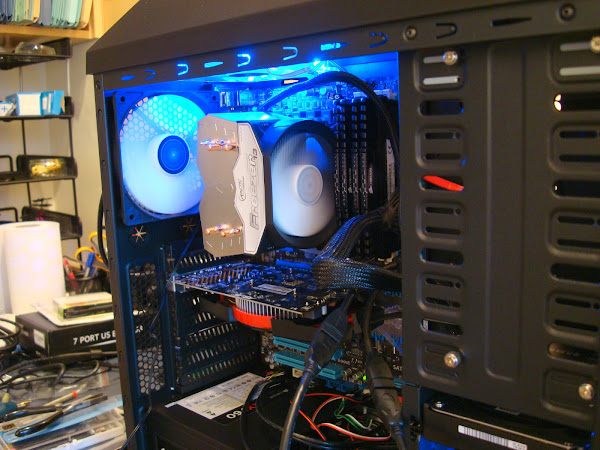 Then as I go to disconnect the DVI-D graphics cable in order to use the VGA output I realised that despite all my double-checking of the internal wiring I hadn’t paid much attention to the external cabling – (mouse, monitor keyboard.) Instead of plugging the monitor into the Graphics card I had plugged it into the Mobo. So I plugged it into the DVI – D output of the Graphics Card and  and went through the power sequence again.

Ab-so-lutely flippin’ brilliant – the Graphical BIOS display comes up and it has the right processor, amount of memory and well, spinning fans.  It also has some discs as well – Optical, SSD and HDD.  You can’t beat that. I do appear to have gone back in time though! 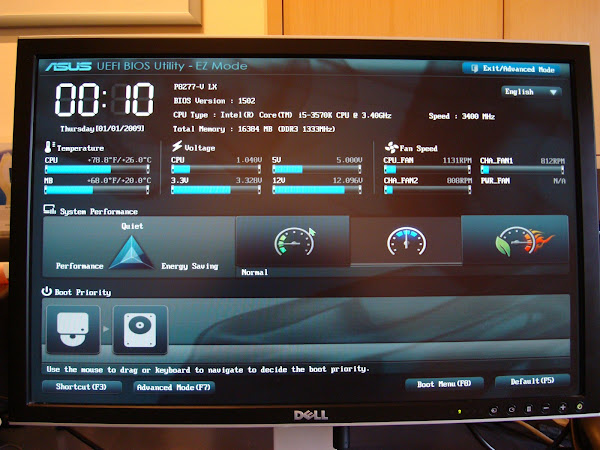 Unfortunately at this point I had to stop and meet someone for lunch. No beer for me – I want to get cracking with the OS and stuff when I get back. I cycled off feeling quite excited – sad eh