More flowers in the Fens

Tuesday, 2nd July 2013: A quick post with a few more flowers in it.  Although as I cycled along the “shared-use” path between Bottisham and Swaffham Bulbeck which is on the NCN51 route I spotted a dress on the hedge. It must be really annoying when that happens I would imagine. One minute you are wearing it and then it disappears.

As I am typing this Chrome Beta is being updated – a new layout has appeared for search results.  In fact the OSM maps have also changed their appearance.  Slightly annoying on the Chrome update some web pages have not appeared. It isn’t always that good at opening a bunch of pages at once.

Talking about OSM or rather about CycleStreets which is different I realise. I downloaded it onto my Galaxy S4. Which I reckon is a really good phone. It does loads of things and the call quality is good. The only let-down is that the data bandwidth is poor when using the cellular network. Now the problem might be compounded by the fact that at the moment I am trying to tweet pictures of off road places I cycle around the Cambridge area.  The tweets/pictures fail to go and take ages not going as well.

I also noticed that when using CycleStreets the maps would sometimes take ages to update (as did other mapping apps). Which is a bit frustrating.  It turns out I was just a bit out of touch. You can also download an off-line set of the OSM maps for use with CycleStreets – which is brilliant.  Well done chaps.

I have been experiencing some issues with my nearly 5 years old Garmin Edge 605 GPS. When I connect it to my computer it doesn’t always show the additional Mini-SD card that is plugged in. So I assumed that the card wasn’t seating properly in the unit and took it out. Now most of the time I don’t pay any attention to the GPS when cycling around the flatlands – having lived here and cycled here for quite a few years I tend to know where I am going.

Most of the time I use it to record my rides and then upload them onto my computer. Having said then when I do cycle along routes I have not been on before then it is great. I plot a route, usually using BikeRouteToaster download it  and then cycle in the unknown wilds (unknown to me) with confidence. I do take a back up just in case though.

I switched it into map view the other day and marvelled as I cycled up a hill passing the contours on the map. I am definitely very slightly fitter than I was 4 weeks ago.  A little while later, when cycling on the Roman road between Balsham and Cambridge I noticed an oddity.

The map view shows a map along with a triangle depicting where you are and a circle around the triangle which is an indication of how accurate the fix is. As you go under trees or between buildings it grows in diameter. Well the circle was huge – the diameter was at least 400m if not closer to a kilometre. I wondered whether I was in a dead zone, but now my phone’s GPS was able to plot my position to within a few metres. I compared which satellites I could see both the phone and Garmin GPS seemed to be in agreement.

Then I noticed that there was no map detail either!  On returning home everything seemed back to normal. I wondered whether the bumpy byways had shaken something loose and now it had returned to normal.

It happened again a couple of days later. I had a map in the vicinity of my house but once I cycled some distance way it disappeared.  It turns out that I had forgotten that I had loaded the entire UK map onto the Mini-SD card (for convenience) and because I had taken it out of the GPS it reverted to a smaller map tile I had down-loaded when I first got the Garmin Edge.

I have put the Mini-SD card back in, with 1.8Gb of the total 2Gb taken up with the UK map and it now works. Although I still can’t see the Mini-SD card (as mounted storage) when my Edge is connected to my computer.

Dress in the Hedgerow 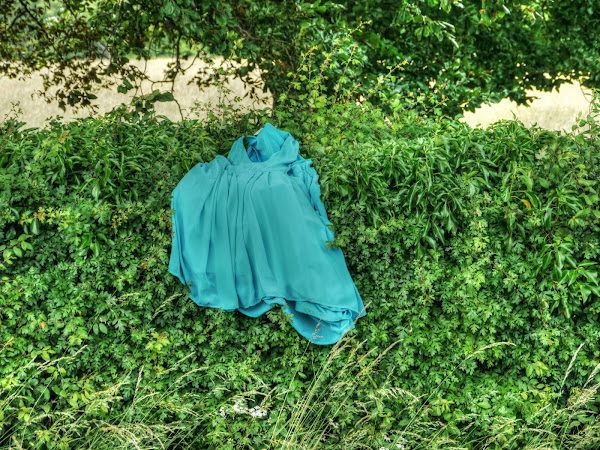 This is the shared-use path, between Bottisham and Swaffham Bulbeck. It is not shown on the OSM cycle map. Which I think is deliberate as the path is far to narrow. Mind you the road is pretty narrow as well and cars do whiz along it. The County Council map of the area does show it as shared-use though.  Here is a link to the CC Central Cambridgeshire cycle map resources. A quick check and the Sustrans map shows it as shared use as well. 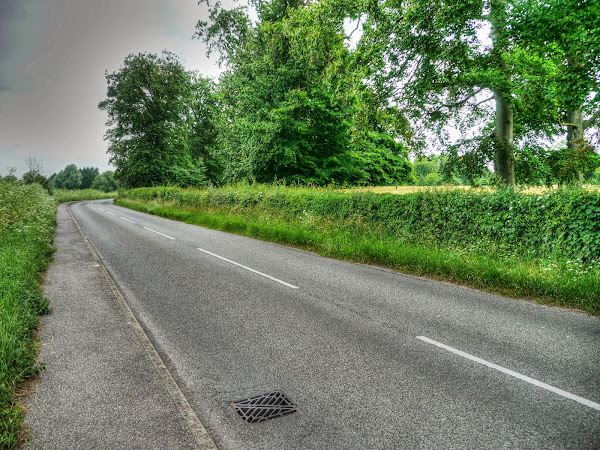 I followed NCN51 before heading down the 11-51 Link (Whiteway Drove) where there was a field full of flax. 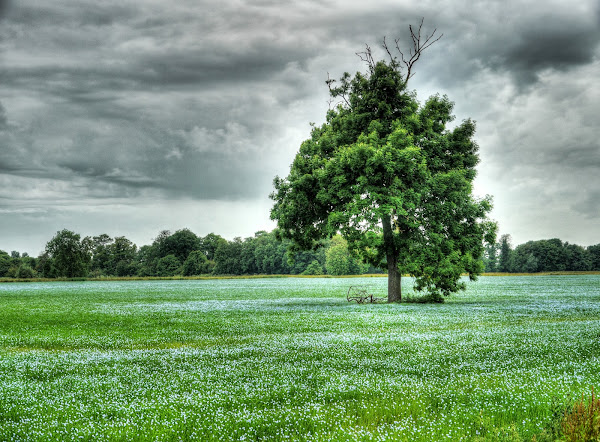 It was quite a big field. 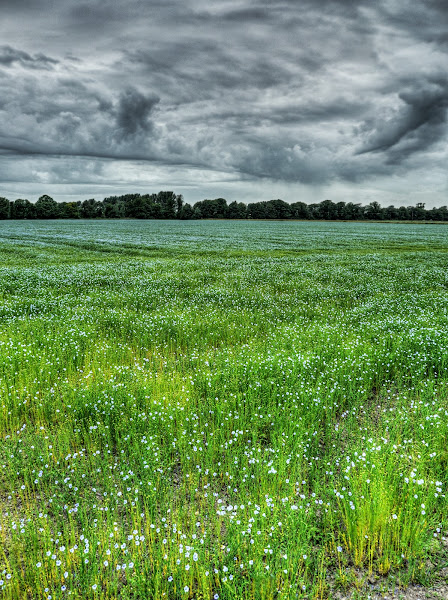 I then headed out along Black Droveway, Blackberry Droveway and Straight Drove before stopping where it crossed Headlake Drove (well the road that heads off from Headlake Drove – it doesn’t really have a name). That far is end is called Blinker’s Hill. 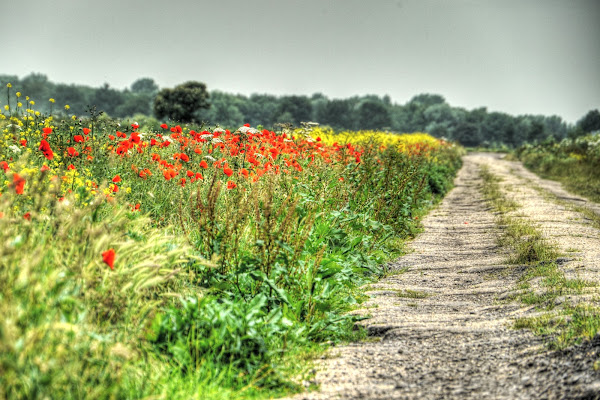 As you can see irrigation is needed in the fields. 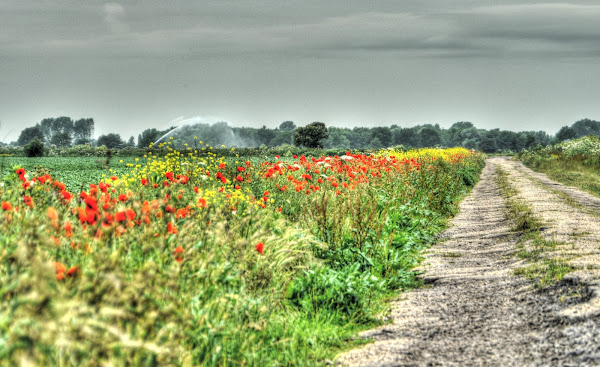 There seems to be a lull in the agricultural activity – although there has been a bit of hay-making going on. 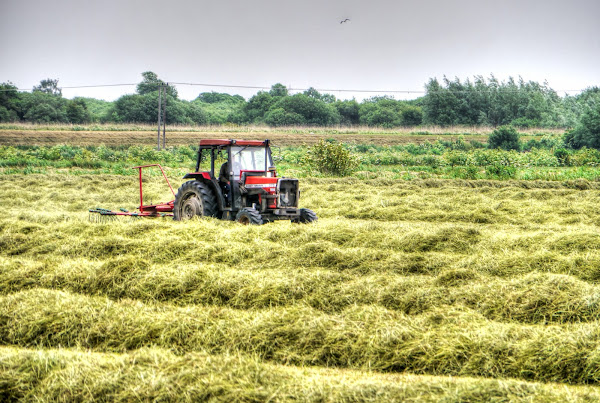 After reaching Upware I followed the bridleway down past Burwell Lode and then along Wicken Lode. There has been work on the Wicken Lode bank – it has left behind a very soft crumbly and tiring-to-cycle-on surface. 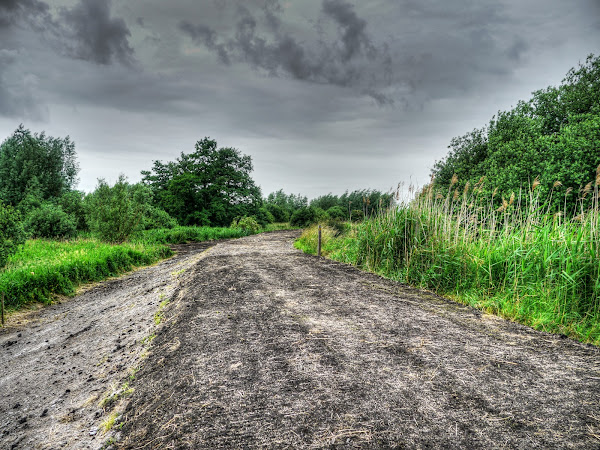 There is grass seed down- but not doing much at the moment. Ah well I can console myself with the thought that it is making me fitter. 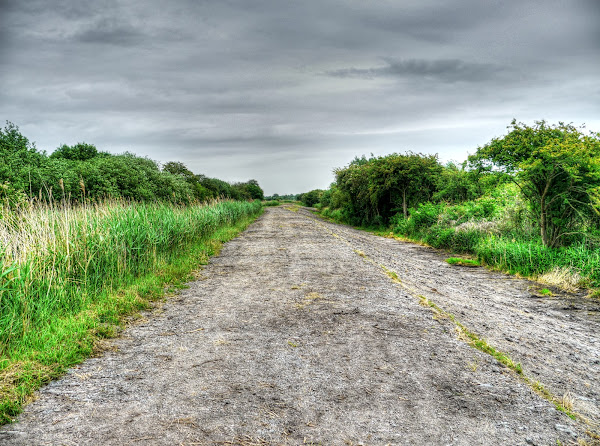 A white waterlily in Wicken Lode. 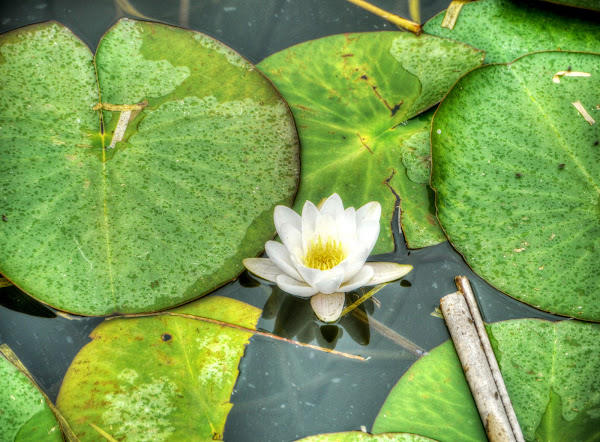 There are still flowers along the edge of the bank though. 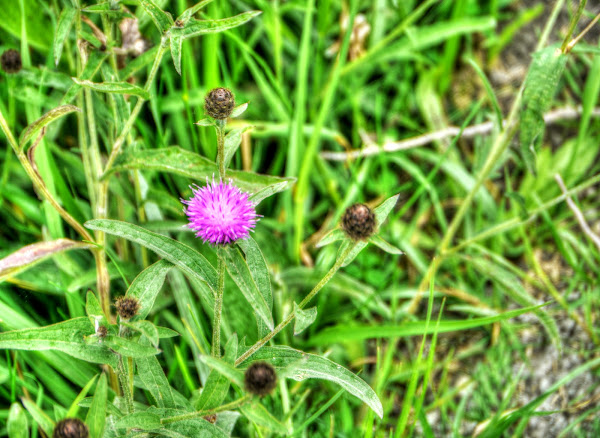 As you can see it takes a lot of signs to warn of the dangers – four. There was also a lookout man when I went past. 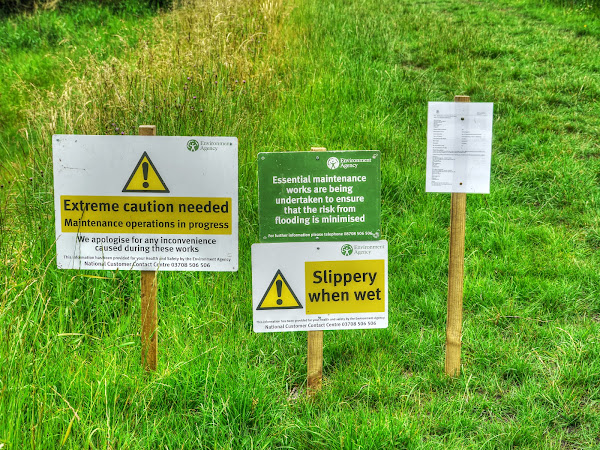 If you look closely it is also going to take a long time to do the work – 56 weeks, with 15 people on site and 4 contractors. 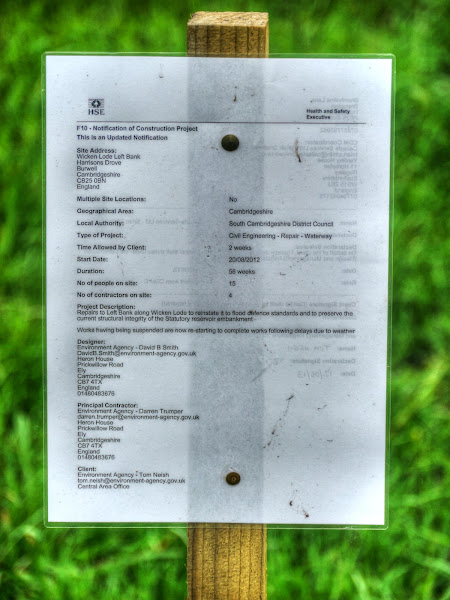 The bridleway turn off from Wicken Lode and down another Harrison’s Drove. The state of this part of the route is dreadful. (It is being worked on – but sporadically it seems – here are some of the Vision Warden’s pictures.  Watch out for thorny brambles hanging at arm height. 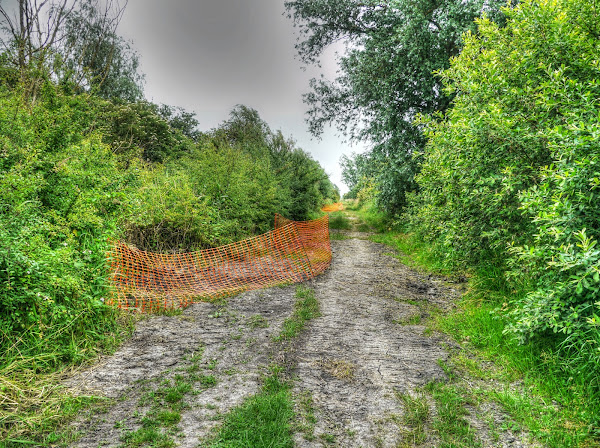 Nowadays bales seem to be round and large rather than small an oblong, when I was a boy. I struggled to lift the bales as a lad – I wouldn’t stand a chance with these round bales. 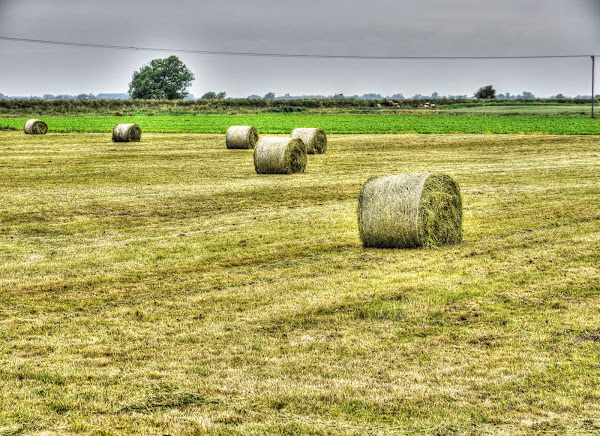 On the way back I cycled from Burwell to Swaffham Prior (and then NCN51 again). These poppies are growing in an Oil Seed Rape field alongside the Devil’s Dyke. (Just about visible on the left of the picture.)

Oil Seed Rape and Poppies – alongside the Devil’s Dyke 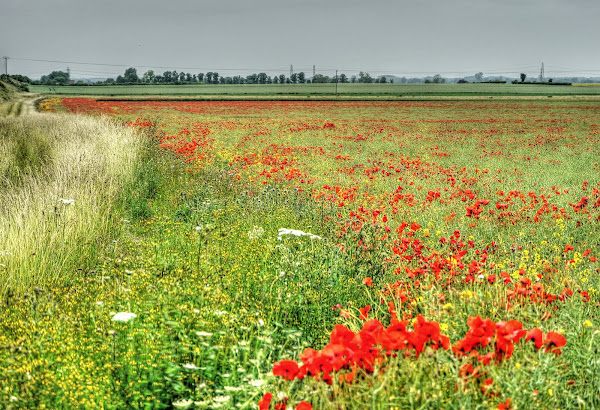 The edges of a field often get different treatments to the crops in the middle.  Here is the production cycle – there are quite a few treatments used as the crop develops.

Oil Seed Rape and Poppies – alongside the Devil’s Dyke 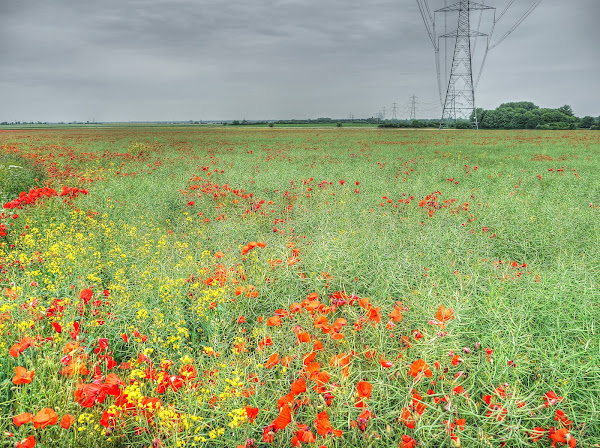