The Fruits of the Fens (well some)

Wednesday 25th September 2013: So the disadvantage of working from home is that it can sometimes be a bit too easy to not cycle. A bit of rain or a bit of gloom and you stay in and even convince yourself that you are being good by getting more work done.

Whereas if you have to commute to work then once you are in the cycling routine you tend to just do it, rain, shine or wind.

So quite a good little routine for me is to get out at least one day of the weekend and then try for a mid-week ride and possibly a POET’s day ride. Despite most of my rides being around the Wicken Fen area – there is always something to see and although it isn’t busy it isn’t totally deserted either.

Of course I have to ring the changes as far as routes go – but there are lots of byways and bridleways, around and about.  I am starting to wonder whether there is a correlation between the sorts or quite routes I cycle along and Solar Farms and Wind Farms. There is Wadlow Wind Farm. There is talk of Solar Farm on the Heath Road, near Burwell(NCN51).

Well I had seen that the Cambridge County Council was exploring the possibility of a Solar Farm near Soham.  It was MikeC (who I bumped into yesterday around the Fens), who told me that it would lie alongside Brack’s Drove bridleway between Wicken and Soham. I guess Solar and Wind Farms have similar requirements to me when it comes to location.

This is what I mean, we do have the Lode’s Way, but there are also numerous signs showing the various ways you an get to the Lodes Way. This is an 11-51 link from Swaffham Prior on Whiteway Drove. 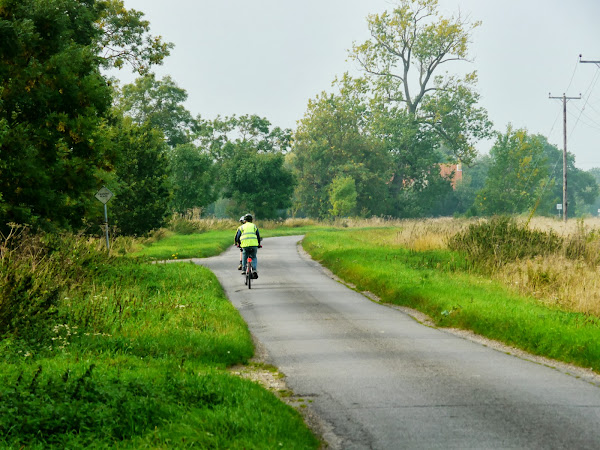 I turned off and then along Black Droveway rather than follow them up the road. These apples look rather nice. This year is a good year for applesw and pears. We have had loads our a couple of apple trees in the garden and one of the pear trees was so laden that a branch broke. 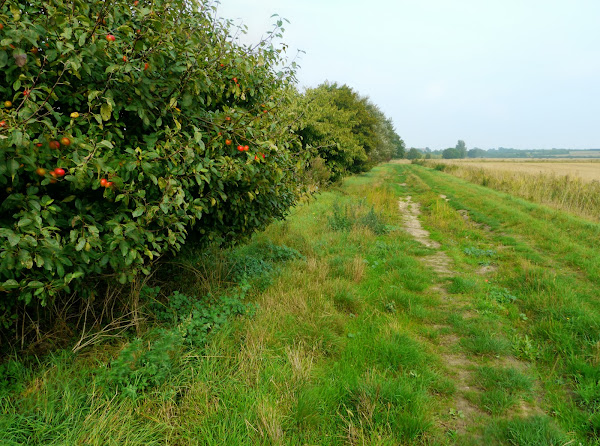 A recently planted Rowan (I think). I didn’t really pay much attention – that is just what I filed away in my memory when I took the picture.  We have just had t6o cut an Ash tree down in the garden. It wasn’t Ash dieback, but did need removing before it became tricky to remove. We replaced it with a Rowan. 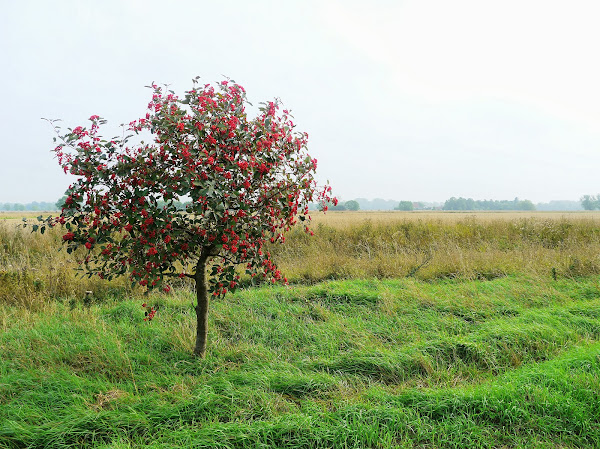 I usually skirt around  Reach on Blackberry Droveway and then up along Straight Drove. A nicely regimented field of bales.

Bales waiting to be collected on Straight Drove, near Reach 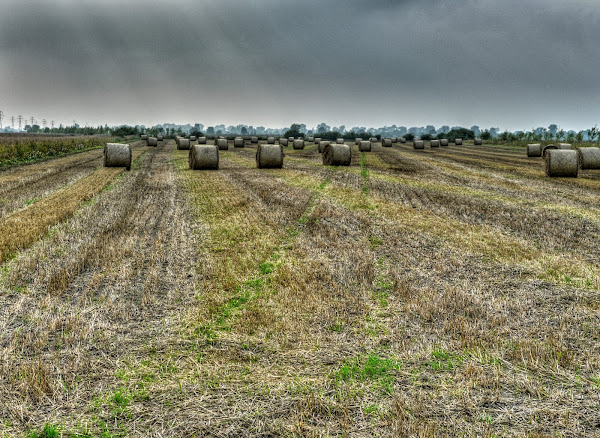 I rather liked the way the trees in the background had a bit of mist around them.

Bales waiting to be collected on Straight Drove, near Reach 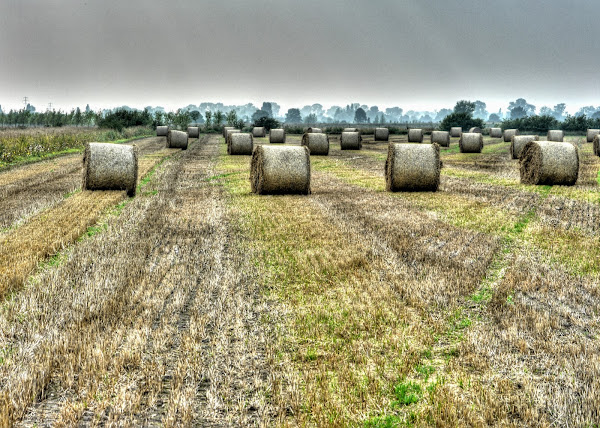 I then detoured along Split Drove and turned right on Headlake Drove.  This is my first Sugar Beet clamp sighting of the (end of the) year.  These are really temporary stores, they usually pull the beet out of the ground just before they get loaded into lorries and taken for processing. They print the dates in the local that the various factories are starting up around these parts. 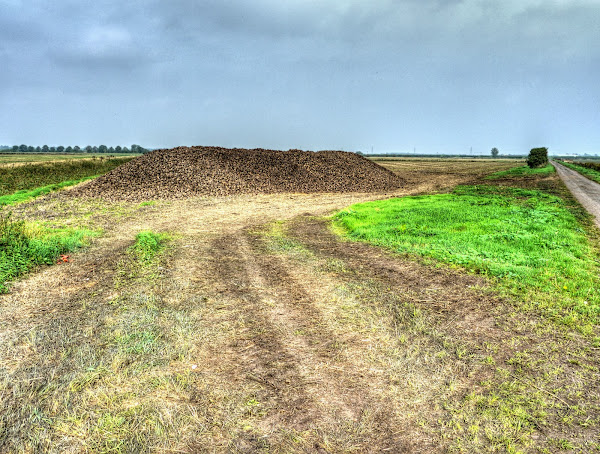 After Upware I headed out towards Wicken.  These poppies are late.  It was the flash of read that caught my eye. 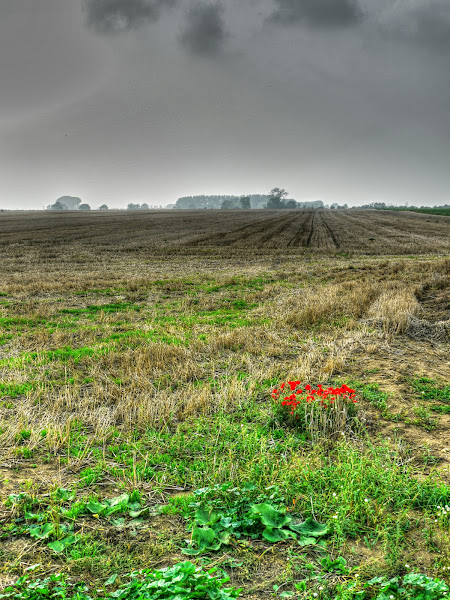 Now this is sort of how I saw it in my mind’s eye. Just a flash of red. So now they are colour-popped poppies. 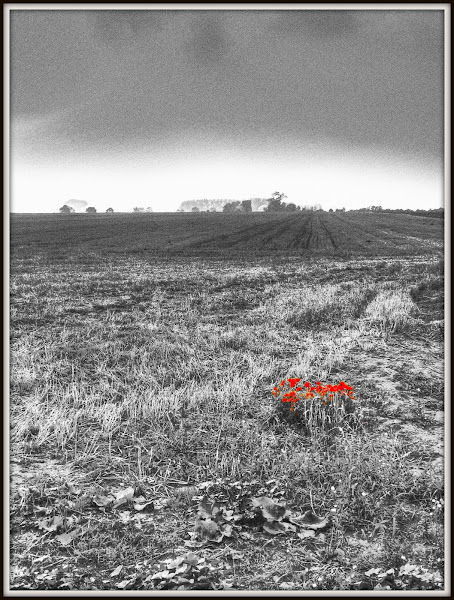 On my way back on Lodes Way (proper) I stopped at Burwell Lode – for the misty look. 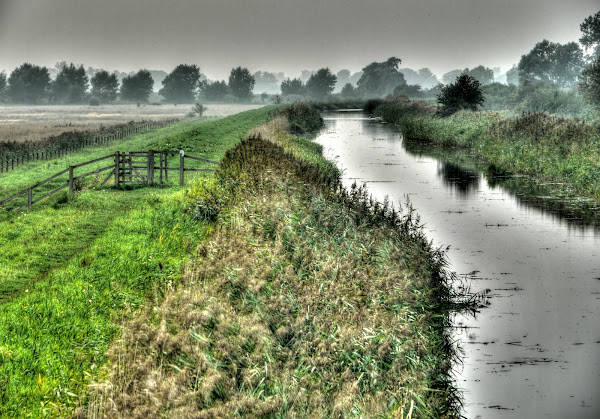 Don’t roll on too quickly Autumn.