Saturday, 15th March 2014: It was one of those days when I just had to go a little bit further afield, at least compared to this years cycling so far.  It was a lovely day, with sun all afternoon and temperatures getting up to around 16oC.  So I ventured a bit further out, although I still made use of the Lodes Way on my return.

Here is the Bike route Toaster link, the loop shown is 44Km  and essentially flat. It is a combination of shared-use paths, byways and bridleways and  some country roads. The country roads are from Burwell to Exning (NCN51) and Exning to the A142. Coming back I did check out a byway from Tollgate Farm to Broads Farm – which helps avoid the unpleasant-ish Ness Road. The road isn’t that bad – but it is quite wide and it seems to encourage some fast driving.

This is a picture of the wide open skies, just before Exning. As Spring is getting ready to bounce there is a lot of activity in the fields as farmers catch up after the wet Winter. 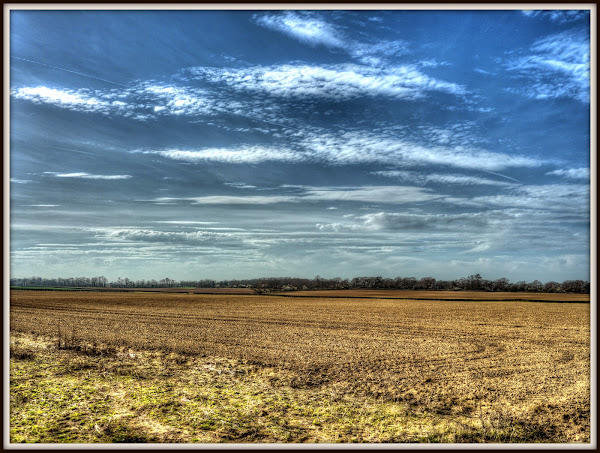 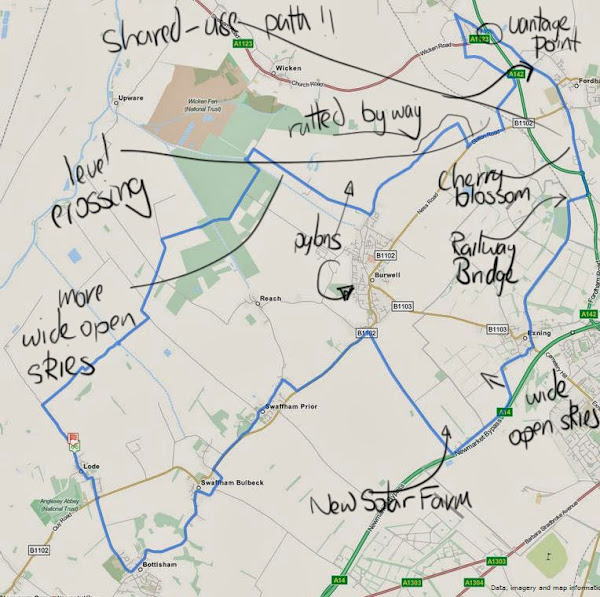 The OSM Map doesn’t show the building over to the right-hand side of the picture – it is called Morby’s cottages on one of the OS maps. A cycle path has also appeared on the OSM cycle map call Heath Path which runs under the A14 – I will have to explore that. 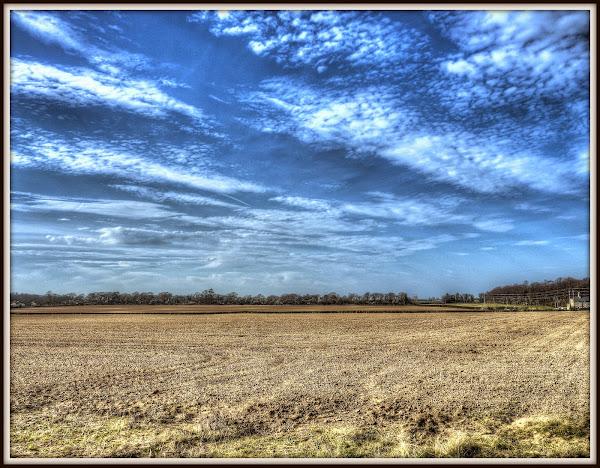 I cycled out of Exning along Cotton End Road, past Landwade. There is quite a bit of warehousing alongside the A142, making use of the proximity to the A14/A11.  There is also a railway line – the Ely to Bury St Edmunds line – there is quite a bend where it joins the track. From the looks of things there was another track so that trains could run directly into Newmarket Station – but the track is no more – although you can see it on Google Earth.

As you can see this bit of the line has two tracks. As part of an investment to increase freight capacity along the route the line between Soham and Ely junction is being duelled. Apparently the work is part of reducing the number of HGVs on the roads each year – by 225,000 (on roads such as the A1, A14 and A47).  Elsewhere in the Wikipedia article is suggests that 750,000 lorries would be taken of the roads. (For reference 225,000 lorries per year is 616/day. 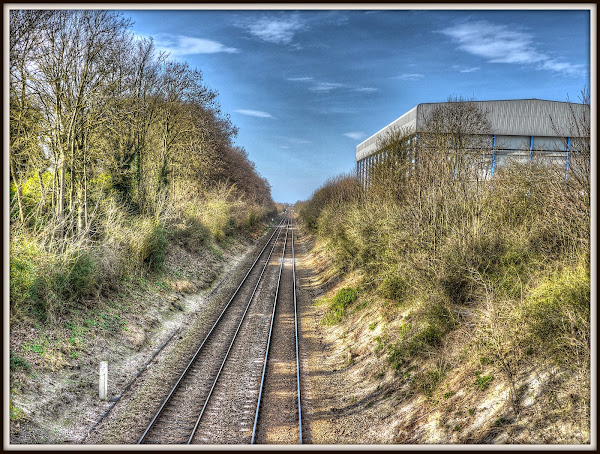 I took a few pictures as the train headed under the bridge and towards Ely – but the information display in the window seems be in stealth mode I can’t tell what it says in any of the pictures. 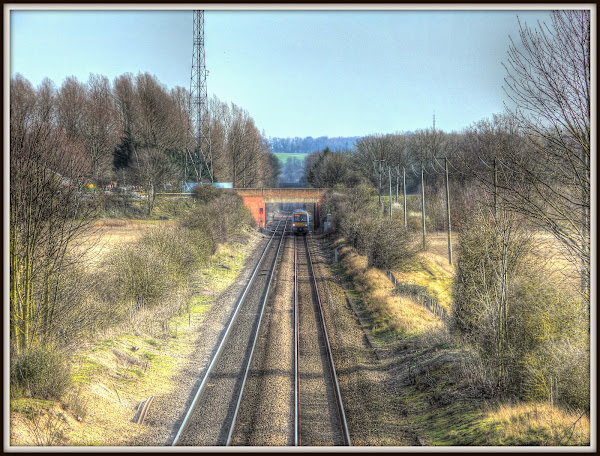 I quite like the changes to Bike Route Toaster, it also seems to auto-route faster. I still find that there are some routes that it won’t follow, so I switch of the auto-routing and then trace them.

Although the A142 is a busy road there is a shared-use path along into Fordham and just before Fordham it bypasses the village. Once you are in the village then it hops around a bit. I don’t always bother when cycling since the hopping (crossing the road) seems a bit pointless when there isn’t much traffic around.

The blossom on these trees on the way into Fordham was amazing. 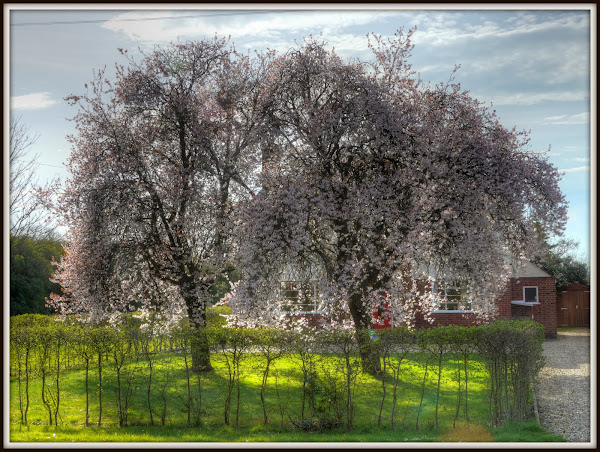 This is the shared-use path after the first hop, it was on the right-hand side of the road. Shared-use paths aren’t too bad when connecting villages. The trouble is as soon as you get into a residential area then motorists also feel that they are entitled to share the pavement for parking.  The trouble is the law about pavement parking is a mess. Now this might sound like I am complaining as a cyclist – well I am not. This sort of thoughtless  behaviour makes the pavements very difficult for wheelchair users or people pushing prams or using walking aids. The pavements can be difficult enough for wheelchair users.

I think that England should follow London and make pavement parking illegal, except where the Council makes an exemption to allow pavement parking.  I had to cycle on the road and then back on the shared-use path.

Why does this matter, well if we want more people to cycle then we have got to make it easier and safer for those who don’t cycle to start cycling and both feel and be safe. It would seem that although London has seen a surge in cycling over the last ten years it has been pretty stagnant in the rest of the UK (in terms of growth). The article also points to intimidating road conditions as being the reasons that cycle commuting is primarily the preserve of young men.

The situation is not helped because schools, which should be ideal places to kids to cycle to and from and really quite hostile because of the school car run.

Mind you this pavement is hardly ideal for sharing in any case. It isn’t wide enough, there are lamp posts and gratings along it and it undulates.  So for the young cyclist what with focusing on balance and steering this is an assault course already – without the added danger imposed by cars parking over the pavement. 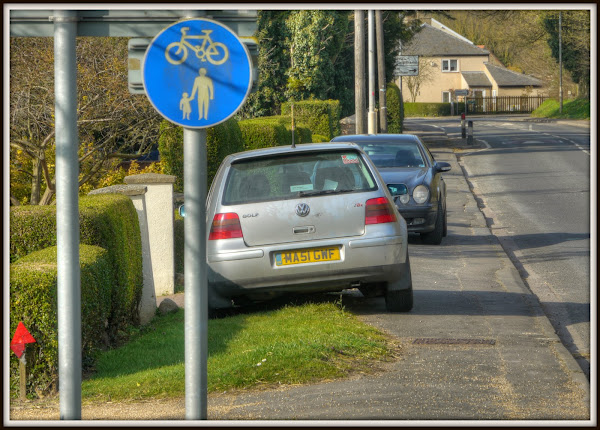 As it happens when I reached the other end of the village (having hopped onto the other side again) there was more over-sharing. 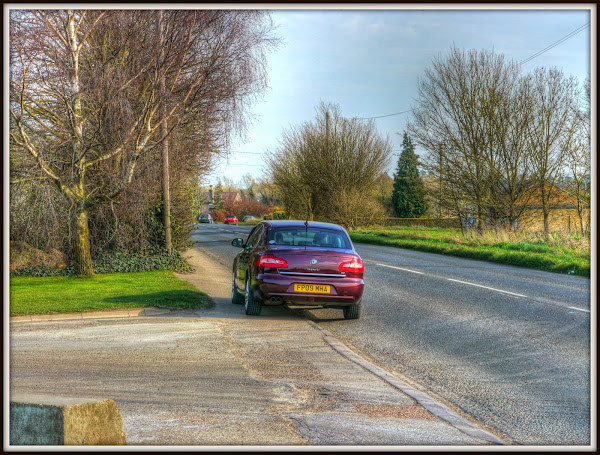 Mind you when you get to Soham there is a massive bridge over the roundabout to ensure that kids can get across the main road safely. The trouble is the rest of the route is a massive compromise. This bridge makes a good vantage point though.

This is the Downfield Windmill on Fordham Road and is on the Heritage At Risk Register. Mind you is it being restored. 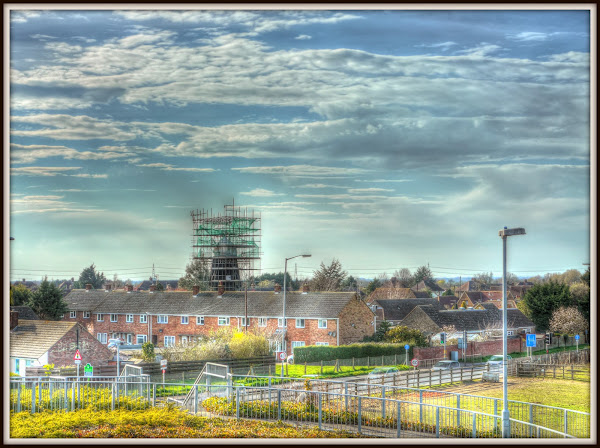 After heading North I turned South again, along a track and down Cockpen Road across the aforementioned railway line. The line runs along the left edge of this field. You can tell the weather has been pretty good recently. The Oil-Seed Rape in this field has started flowering. This corned of the field must be a bit of a sun-trap. 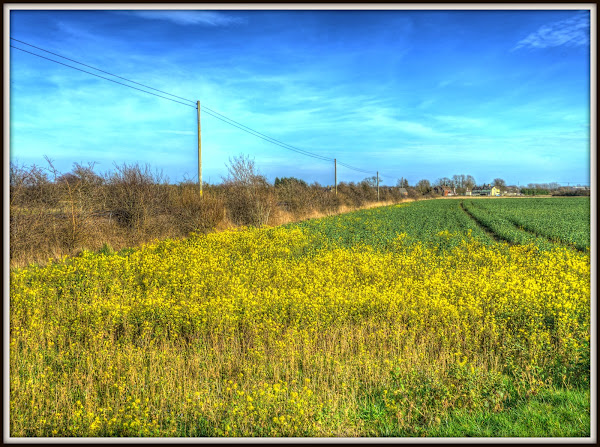 After a brief ride along the B1102 (called Station Road at the Fordham end, I passed between Tollgate Farm and Ness Farm along a well-used byway. I say well-used – I have only ever seen farm vehicles on it (apart from my own bike). It heads back North but the track then turns left towards Burwell (Broads Road).  This is not the track but the stub shown on the map as heading towards Burwell Lode.

I hadn’t noticed it before but there is a sign showing a footpath in the picture. The sign I think signifies where the footpath crosses the railway line. 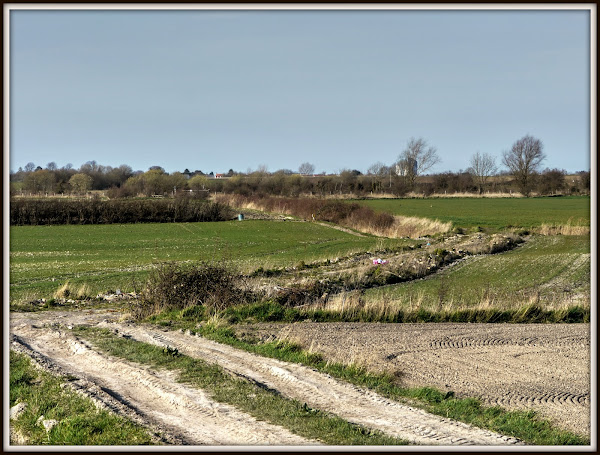 This is the bit of the track that is a byway. Fortunately it was not too muddy – it was fairly rutted though. I managed to cycle along it without any dabs, this time. Mind you the next time I cycled along here a few days later I almost fell off had an unplanned dismount. I was sticking to the dry ridge and on a narrow bit my tyres slid down the side of the ride.

Byway Leading to Broads Road and thence to Burwell 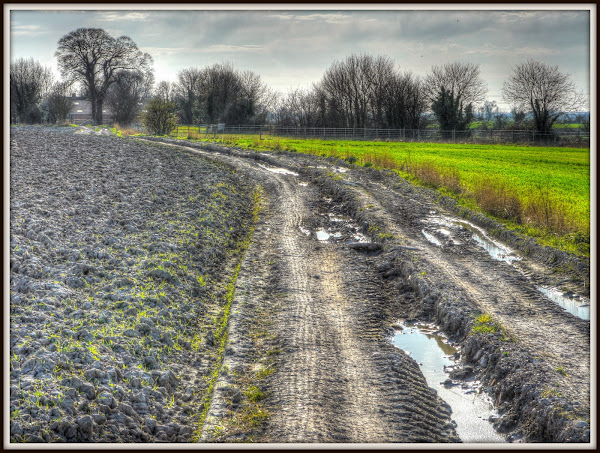 I too the long way back and headed towards the Lodes Way.  Although I stopped to take a picture of these pylons marching from Burwell Electricity Sub-Station off into the distance.

Pylons Marching Across the Fen Farmland from Burwell 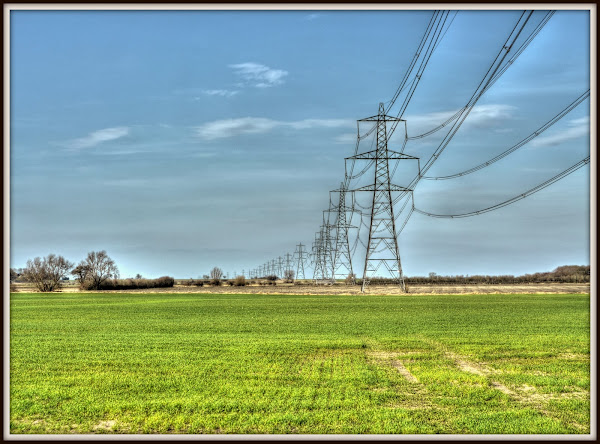 At the top of the road near Priory Farm I took another picture of the wide-open Fen skies. The soil was dark and the skies were blue.  You can just about make out a straggle of house on the left hand side of the picture – the edge of Wicken village. (The pylons can also be seen behind them. 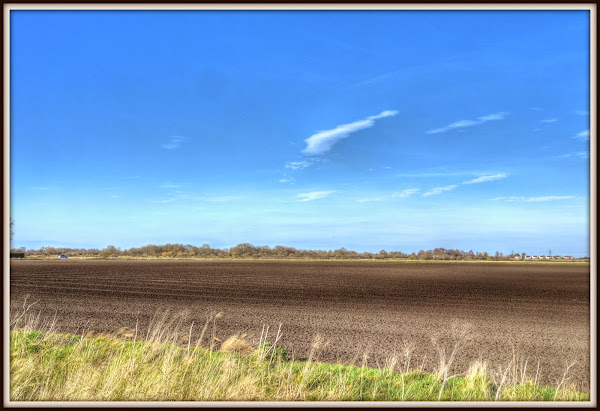 Let’s hope we don’t get too much wind – with all these ploughed fields there is a risk of a fenland blow.