Wednesday 2nd April 2014: (Castle Acre and lunch)  I forgot to mention in Part 1, one of the other items I took with me on my journey was my MP3 player – I also made sure it was fully charged the night before. However I didn’t use it – even when on the train. I was too busy taking in the scenery and thinking about the route.

One feature of accident reports or should that be crash reports – if a cyclist involved in a crash is listening to music then it gets reported as was the case with this tragic report – “Killed cyclist ‘distracted’ by music”.  Yet in the case of a car driver being involved in a crash it never gets reported whether the driver was listening to the radio or their CD or MP3 player. So what is it about cycling that makes distraction by music so much more wrong? (I have not yet found a car crash report which mentioned whether the radio was on or not.)

On another topic – in my last post I mentioned how it was a shame that the rail network wasn’t as extensive as it used to be in Norfolk – because  it would be a great place to explore by a combination of train and bicycle.  Well here in Cambridgeshire we seem to be getting a BikeBus Explorer – a bus towing a cycle trailer to allow visitors to use bikes and buses to explore our lovely countryside, before it is all gone. It will run on Sundays and Bank Holidays – I will have to give it a go.

Back to the Peddars Way. After coming to the end of Procession Lane, a restricted byway, the country lanes were still great for cycling. In fact after rubbish dump railway bridge the route headed past Palgrave Hall and then onto a bridleway and then onto Southacre Road in short order. If anything I rather like the swapping it makes the journey more interesting. Providing the country lanes are rural that is.

In fact you get blasé about the scenery – I almost didn’t stop to take a picture of the cowslips growing along the Southacre Road.  Look – flipping Pylons getting into the picture again. 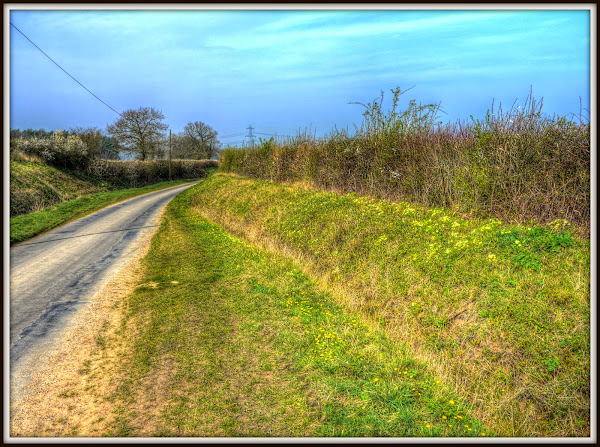 The ride into Castle Acre did not disappoint. Southacre Road became Big Wood Lane before the route turned down South Acre Road (unsuitable for motor vehicles) and onto Blind Lane and then Bailey Street.  There is also quite a change in elevation as you head towards Castle Acre – down and then back up again.

This is where I have to confess my ignorance – I thought this was the Castle – and I completely ignored the real Castle.  In fact this is the Castle Acre Priory. 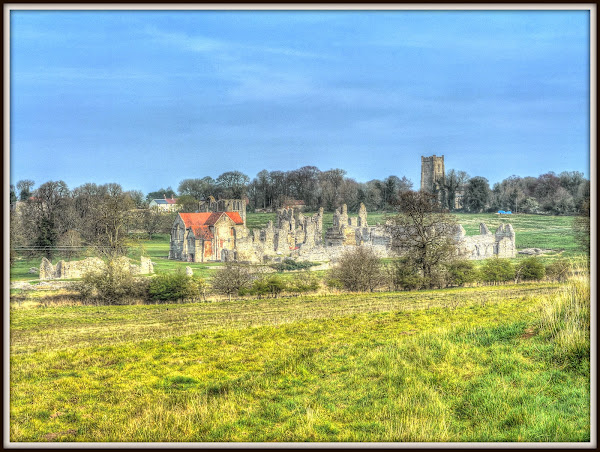 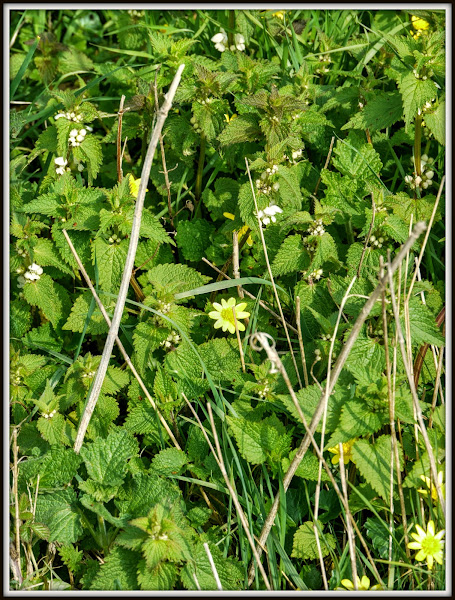 There are road signs warning of the impending ford – it doesn’t seem to appear on the OSM map though although you can see the foot bridge alongside the bit where the River Nar disappears under South Acre Road.

I do cycle through Fords – but discretion and the fact that I had an unknown distance left to cycle made be cautions. In fact ordinarily .I would have waited for the car to move before taking pictures – but I was hungry. 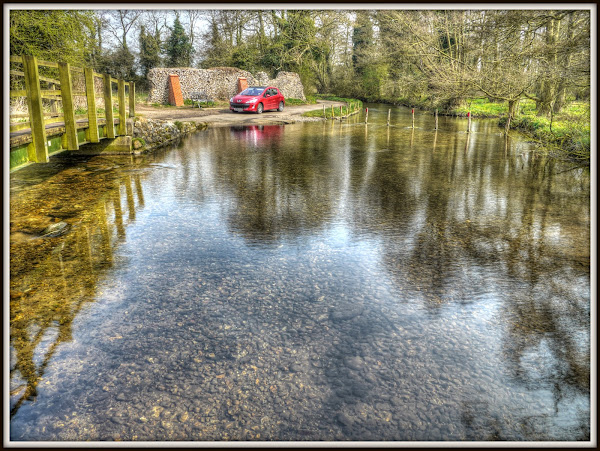 The is the view the other way with the Priory just peeping around the trees on the river bank. There has been work on conserving and restoring the river. 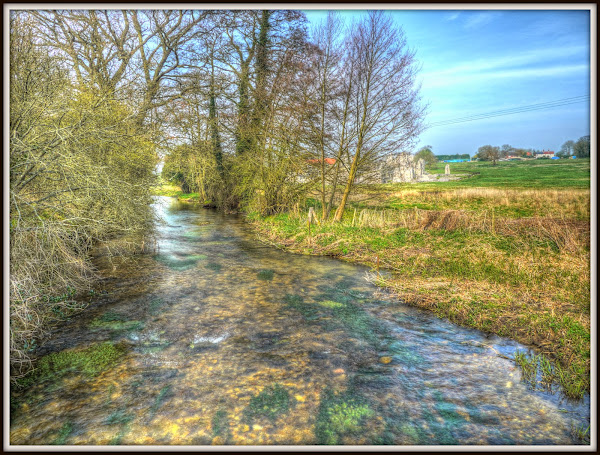 Here is Maisie, my trusty Marin bike patiently waiting for me. If those handlebars were any wider the bike wouldn’t fit the bridge.  The bike is a hybrid in more ways than one. It started as a hybrid – but the frame cracked and it was replaced under the lifetime guarantee so it is a combination of two bikes. 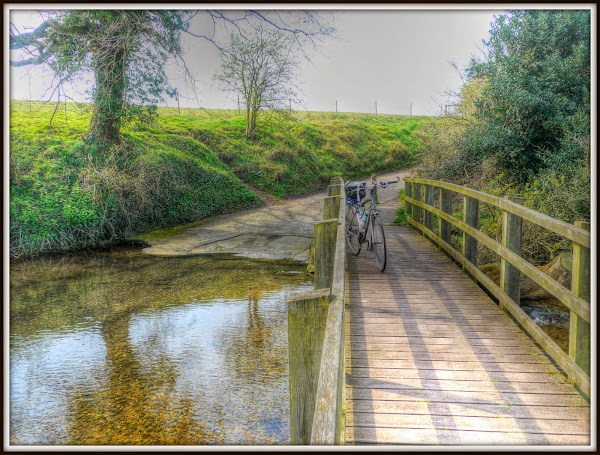 As I cycled along the back streets one of the advantages of cycling was demonstrated to the folk in the red car I met at the Ford. I could easily stop to take this picture of Castle Acre Priory – they had no-where to stop and drove on past me thinking that’s a nice view.

Mind you I also failed to notice the Castle on the other side of the road! I can see why – I have just done a quick Streetview trip – there are houses blocking the view. 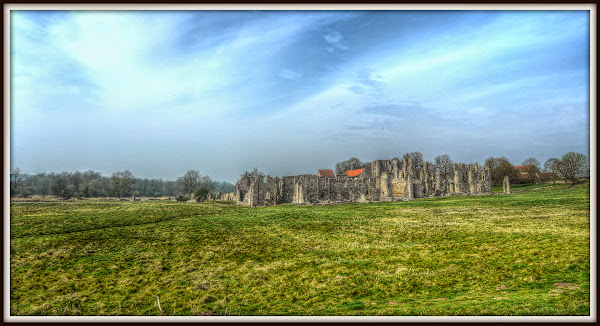 Although maybe this was a clue, a quick check and I was going to fit. Although the route was to the right I first cycled to the left. It was very picturesque and I was peckish. Nothing jumped out at me so I carried on along the route. 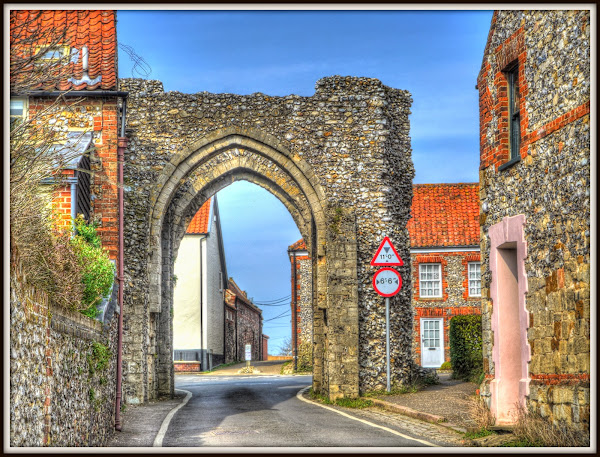 A turn or two more and I reached a Costcutter – my stomach reminded me that I needed to eat some food. So I stopped here and bought a cheese and potato pasty – which was really quite tasty, I also bought a sandwich – not so tasty – although maybe after eating the pasty I wasn’t so peckish. I also found myself drawn to buying something sweet. The trouble is my memory tells me how much I enjoyed bars of chocolate when I was a kid. I also like dark chocolate. So I also bought a dark chocolate kit-kat. It was underwhelming – I won’t be tempted again. I should probably just stick to decent quality chocolate.

I ate my picnic on a park bench just across the road. I swigged diet coke to wash it all down. Life was good – my stomach was full – the route had been wonderful and I had made progress. I could barely sit for a minute or two’s rest before setting off.