A Long Weekend in Scotland–getting there

Mid-August 2014: My daughter's birthday is in August and she was going to be pretty busy with work, so my wife and I decided we would pop up to see her.  Only this time I wasn’t going to drive. Instead we flew up from Stansted to Edinburgh and then rented a car at the airport.

We could have flown from Stansted to Dundee – which would have been more convenient. However the cost of the flights was going to be quite a lot more expensive, so we didn’t.  We did book parking at Stansted and the rental car through EasyJet which was convenient.

Our plane – ready to take us to Edinburgh 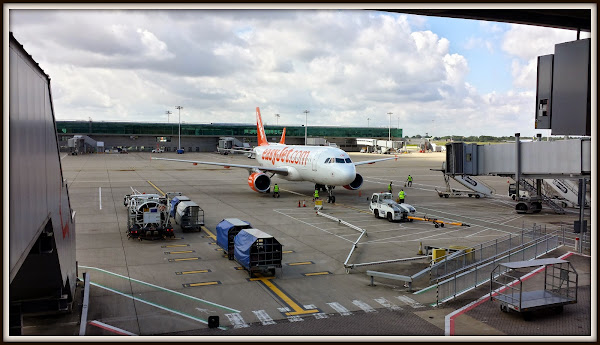 Of course when booking via Edinburgh I had forgotten that luggage can take a while to get from the plane to the terminal – which it did. As we walked out there was a stand to ring the car hire company, so I did. They told me to walk out the door and around 100m.  well if I had had my wits about me I wouldn’t have bothered with the phone call. Since I have been at the airport the previous month and knew where the rental hub was. As we strolled into the rental hub, which houses several car rental companies it was packed. It turned out that loads were waiting for EuropCar. I reckon we waited for around an hour before finally getting to the counter and signing up for the car.

What do they say about convenience – a moment on the web – an hour in person in a queue!

The chap at the counter was friendly and polite and did try to sell us the “excess” insurance. I turned it down. When travelling on business I didn’t really have to think about such things. When it is my money I do focus on it more.  It turns out what we could have done is buy independent Hire Car Excess insurance at a far more reasonable rate.  Suffice to say it made me far more paranoid both when picking up the car and when driving it and parking it – which was no bad thing.

There were some minor scratches on the car  when we got it along with a form describing them. I pointed out a few more that they had missed before signing the form.  In my paranoia I had forgotten that my booking form had mentioned AC, there was no AC in the car. Would I have to pay to get it fitted when I returned the car? I also took pictures of all angles of the car on my phone as well – just in case.

It was a pleasure to be on our way. The route up from Edinburgh is pretty straightforward and takes you over the Firth of the Forth, up the M90 and then across through Cupar. This time we were staying in St Andrews, a town with quite an old University. Once again we stayed in The Score Hotel.  If we had flown to Dundee we would probably have stayed at the Apex.

We have stayed at The cores a few times, is it me or do our rooms seem to get smaller each visit.  This time around our sash window would remain open and we propped it up with one of the tourist books hotels leave in their bedrooms. It blew out sometime  in the night, fortunately only onto a ledge.  People often think of Scotland as cold and not always blessed with good weather. Well in our experience over the last few years the weather can be pretty amazing.

I parked the car in a nearby long-stay car-park. It was free (this is Scotland) and closer than a short-stay car park in Cambridge,  I did take pictures of the car and the vehicles around it – again just in case.

We went for a walk around the town – to find the main streets closed to traffic – there was a fair. So we wandered through some of the more cloistered areas.  This is part of the University – St Mary’s Quad. 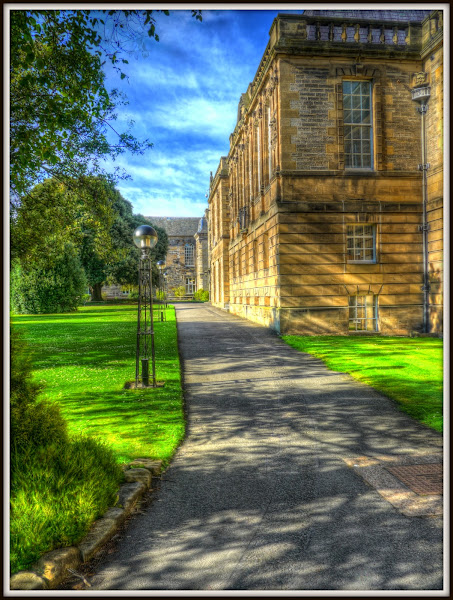 This is another corner of St Mary’s Quad 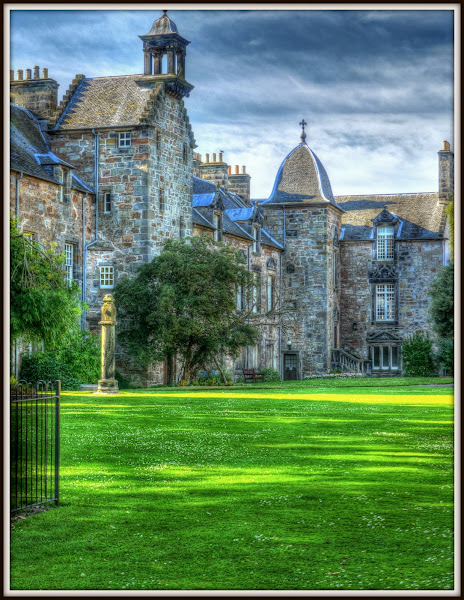 After dinner we returned to our hotel along the Scores – the sun threw up a golden sky over one of the myriad golf courses. 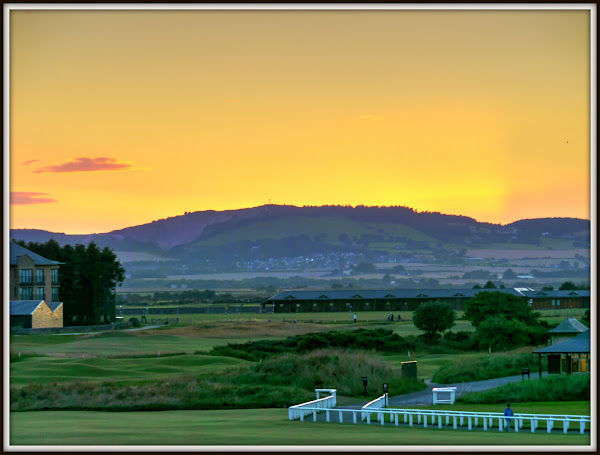 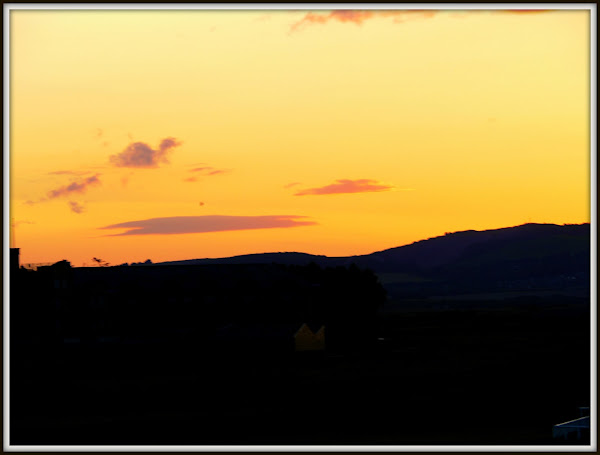 Tomorrow we may visit the Isle of May – weather permitting!