Infrastructure–can we have it joined up please

I had the pleasure of cycling on the new bit of the Tins path in Cambridge. It is a shared-use route for pedestrians and cyclists that connects the top end of Mill Road with Cherry Hinton – well almost.

(Note: The current Open Live Writer does not have spell checking – so forgive me for my typos please.) 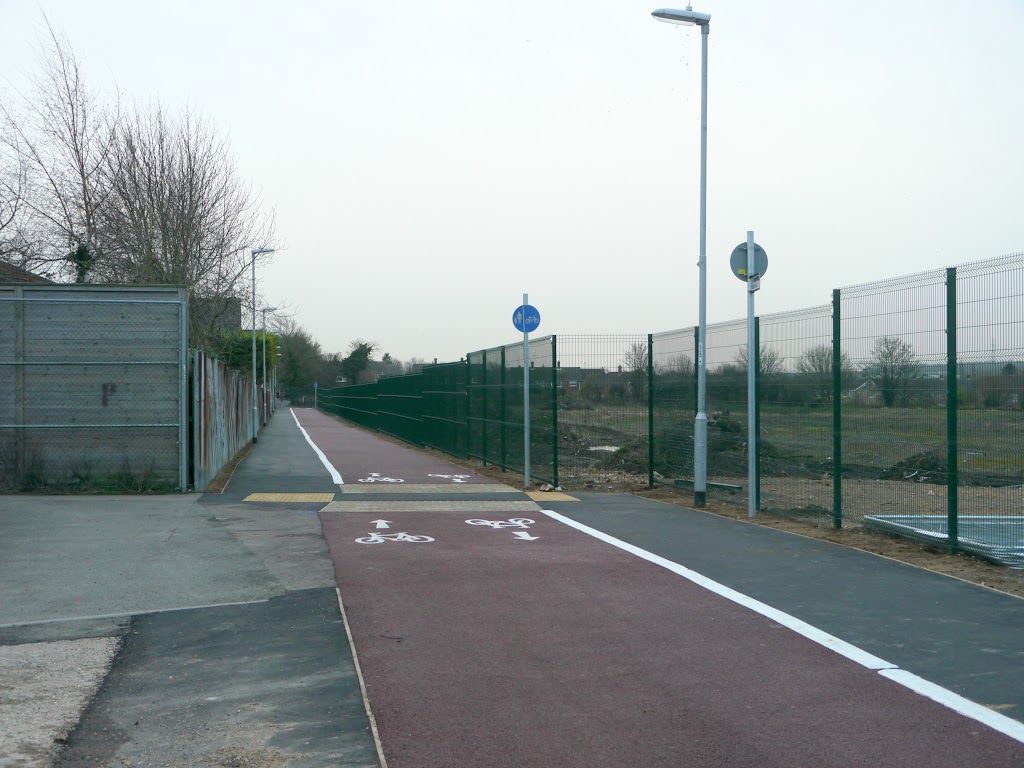 A former footpath has been widened and the pedestrian and cycling areas separated, using coloured tarmac and a white line. As far as cycling facilities go, here in the UK it is at the top end of quality. As you can see it suffers from the usual swapping around of pedestrian and cycle paths. It is flat and fairly straight.  (There is a kink you can just about see further into the picture. However someone has thought about things like lamppost placement.

I personally cannot stand the ridged bits of yellow concrete that seem to be used widely wherever pedestrians and cyclists might cross paths.  They run in the direction of travel and the little kick the ridges give to the wheels as you run along them can be most disconcerting, particularly at night and in the wet. I reckon the best thing to do is take them at speed so that the bike’s momentum minimises the hit on the balance. However I don’t see other cyclists complaining so it must just be me.

Now it seems to be blindingly obvious to me that with the huge amount of development taking place around Cambridge and its surroundings (40,000+ homes) that there is going to be a huge pressure on to get in and out of Cambridge during the rush hour.  Unfortunately our past and present Governments have seen fit to preside over the rundown of public transport, a decline in funding for cycle infrastructure and an increase in the number of cyclists killed or seriously injured. Small wonder we have an obesity epidemic and that the police regularly have to crackdown on parking near Cambridge Schools (Cambridge News!). I wont get started about pollution – noise and air, or climate change.

We know that Cambridge traffic is already awful and that there really isn’t much space to build new roads, either in the city or near to the major places of employment. In Cambridge we have our “transport chiefs” seemingly patting themselves on the back for holding the “tide of motorists” back in Cambridge, whilst the motorists claim any road schemes are anti-motorist. Apparently there has been a 15% reduction in traffic entering the city along with an 88% increase in cyclists.

It seems to me that given the huge increase in population in and around the city particularly near some of the major routes into the city  there needs to be a foundational change to transport in Cambridge. (Cambridge Wing – 160 acres – up to 1,300 homes. c.f. Burwell 2,386 households.)   If we don’t then the already intolerable congestion will get worse, a bit of fiddling around the edges won’t do.

So the decrease in traffic is due to the intolerable congestion already present, the increase in cyclists “driven” by the intolerability of driving.  For instance all the work taking place at the railway station must surely have affected transport choices for those wishing to use the train.

So whilst I welcome the current cycling infrastructure improvements both in progress and on the horizon for Cambridgeshire I can’t help but feel that they represent too little too late. So what has brought on the moan. Well cycling along the Tins, there is quite a nasty pinch point where it crosses the Cambridge – Ipswich Railway line. There is also another pinch point at the other end – Orchard Estate. The worst thing is that the path doesn’t even reach the High Street before it turns into a road and you are at the mercy of the Cherry Hinton chicanery.

Returning along the Tins is even harder.  If you follow this Streetview link, heading towards the railway line you find a cycle lane and bollard getting in the way of a right turn onto Railway Street. I have been cycling for a long time and am not easily bullied by impatient motorists, but for the sake of a quiet life this would stop me using the extension to the Tins path.  A grotty right turn of the High Street and then narrow “shared-use” path would put me off, I would stick to turning at the traffic lights by the church.

Now don’t get me wrong I really like the fact that the work has been done on the Tins, however I can’t help but feel that more courageous decisions need to be made to make alternate modes of transport more appealing if we are to see an improvement in the flow of people around Cambridge. I am sorry but to all you motorists driving around all alone in your tin boxes the time has come to switch to a more efficient mode of transport – one that makes better use of the limited space. The bonus is a bit of fresh air and exercise into the bargain.

I know that I sound like a whinging cyclist, but in Cambridge space is in short supply so there needs to be a space tax so that we make more effective use of that space. Otherwise we will all suffer the misery of congestion. Yes even cyclists get caught up in the congestion around Cambridge.

It rather seems to me that someone somewhere in charge of Cambridge transport has a fetish for convoluted cycle routes. Try cycling along NCN51 from Quy into the City Centre. There are right angle-bends, low priority crossings, side roads galore, cattle grids with narrow gates and conflict with people just wanting a casual stroll through the park.

Stourbridge Common – NCN51 to the right 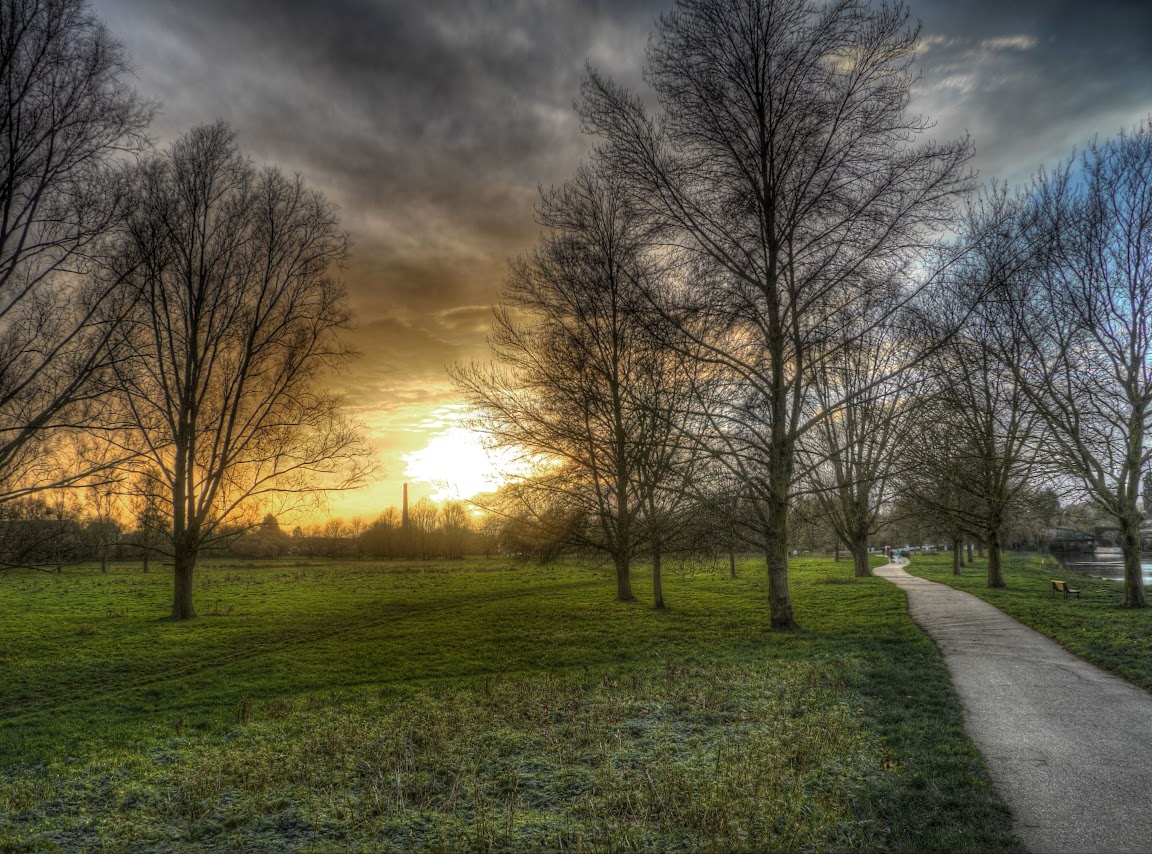 Another example – the excellent Chisholm Trail, is gathering support – look at it – not the most joined up of routes. Bite the bullet Transport Chiefs  – make it straighter and give it priority over the motor traffic. (Another larger map of the current route is here.)

Another example of poor infrastructure – The wrong kind of bollard?. A seriously broken collarbone because someone thought bollards along a cycle path were a good idea.

PS OLW – Open Live Writer – works for me - thanks to those making it happen.

PPS – This is the calibre of our highways boss – “Cyclists should be considered for a Cambridge congestion charge”. What hope do we have?