Somewhat inevitable really I have had my first puncture of the new year and that is despite using some of the toughest tyres out there (Schwalbe Marathon Plus for those interested). I was cycling along a small mud-covered country lane in the twilight. There is no let up for the farmers in these parts - fields have to be ploughed whatever the weather. It is quite usual to see tractors ploughing in the dark with lights to the front and rear. The rear lights illuminate the plough to ensure everything is ok at the business end. The mud also contains lots of small pieces of grit and quartz, which can be quite sharp.

As I was cycling along, listening to a podcast, I could hear a noise like a leaf caught in the front wheel being regularly hit, I slowed to pass a woman pushing a pram. (Nothing like a bit of fresh air and bumping to get a baby off to sleep). I decided to stop where the road was a little less muddy and as I slowed I realised that the noise was air coming out of the tyre. Fortunately it was the front tyre, unfortunately it was very cold and getting darker. I had both spare inner tubes and patches and after finding the problem - a large bit of quartz sticking out of the tyre took the tyre off and thought I would just pull out the inner tube near the puncture and patch it.

"More haste less speed" I pulled out a bot of the the inner tube near the punctured area but could not find the hole so I pulled out the complete inner tube and inflated it several times to find the problem. It turned out to be a thin slit in the tube about 3mm long. It was almost invisible in the gloom and the easiest way to locate it was to hold the tube near my face and feel the puff of the air escaping. I then applied some glue and a patch, pooped it back into the wheel and pumped up the wheel - which did not seem to inflate. At this stage I wondered if the pump was working!

As I was doing this the pram-pushing lady, now on her way back, stopped to ask me if I wanted any help - people are not so impersonal in the countryside. It turned out that I had not pt the patch in quite the right place - it was dark by now and so in the end I swapped out the inner tube for a new one, double checked the tyre for any more sharp bits, on the inside, pumped up and and set off again. By now it was very dark and cold and my feet felt like lumps without too much feeling.

As well as cold it was also foggy as I cycled out into the Suffolk countryside. My re-chargeable light is great as it has a very bright flashing mode and so you get what seems like a regular pulse of light as the fog is illuminated around me - cars tend to give me a wide berth so I assume car drivers also see it. It was bright when I set off and I went along some bridleways, but cycling on icy, muddy rutted tracks is a little dodgy without a helmet so in the end I switched back to the road and took some fog pictures.

Here is a single tree in the middle of a field, you could just about see the glow of the sun off to the left. 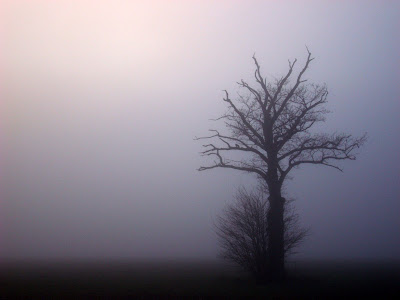 Here is one of a church in the mist with a bit of post-processing of the picture. I converted it to black and white and then tinted it . 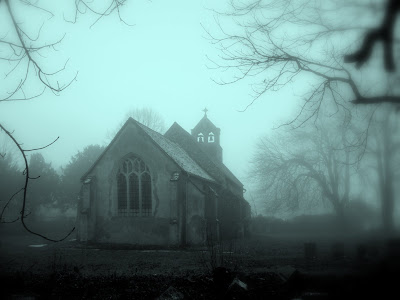 If you think this is odd when cycling back through Wicken Fen (which I haven't done for a few days as I have been heading off in other directions I regularly see bird photographers with cameras on tripods and big lenses hoping to capture something or other. In fact one of my routes take me along a country lane which backs onto one of the main rubbish tips in Cambridge. I was surprised to see a bunch of photographers with their cameras pointing at the rubbish tips waiting to take some interesting pictures.
Posted by Jme at 6:59 PM