One of the interesting things about owning the Garmin EDGE bicycle GPS is that it has made me think a little more about about exploring new paths along my ride. In general the paths tend to be by-ways, which most of the time look like muddy tracks - but just like roads most of them head somewhere. They are rights of way and although many are used by tractors are cycleable on either my hybrid or my touring bikes.

Yes I do have a mountain bike - it is around 15plus years old, so does not have any suspension and is great fun on really rocky paths and muddy single-track. Unfortunately here in the flatlands of East Anglia there are not too many places where it is really needed. I have taken it up to Thetford Forest, there are some great swooping tracks through the forest and it has been up to the Lake District a few times, but the big knobbly tyres are not so much fun on tarmac, they seem to soak up the pedaling energy.

What I generally do is mentally map out an area that I want to cycle around and roughly how far and how long it will take. At the moment I always carry lights with me. Even when I expect to arrive back in the light it does not take much to change my plans. One day I had three punctures and ended up having to take part in a conference call sitting on a bench in the middle of Burwell because I was not able to get back home in time. I am not sure what the locals thought of me, but at least there was cell-phone coverage and it was not raining. Cycling on a bicycle is much more comfortable than spending two hours sitting on a wooden bench though.

On the way round I then look at the map on the GPS to see if there are any interesting byways. It always surprises me how many byways and BOATS I pass. (Where BOATS means Byways Open To All Traffic - a UK legal term!). If the byway is roughly in the right direction or quite long and not too rutted then I head down it. Sometimes I end up turning around, most times I find myself in the middle of the countryside, away from traffic just pedalling. Here is one such track that seemed to be popular with the local horsey fraternity, well I saw one horse and rider. It actually shortened my planned route and the track included its own bridge across the M11. 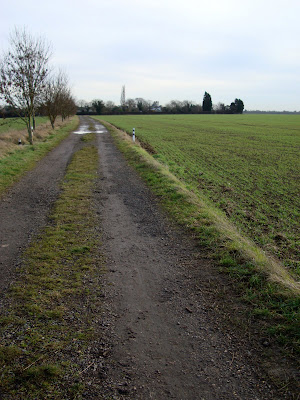 Farther around my route I detoured through Fen Drayton along a "no through road" to find that it ended up in an RSPB reserve at Fen Drayton. (http://www.rspb.org.uk/reserves/guide/f/fendraytonlakes/directions.asp) Just off the Sustrans Route 51, the only downside is that they are building a guided busway through the area (Cambridge to St Ives) and so the tracks were being used by heavy lorries. The lakes are man-made from excavations for gravel/sand and so have "roads" that are able to take the heavy traffic. and to be fair I only passed three trucks. Here are some birds!

I also detoured to another village - Conington I really like the shape of the church there, as seen here silhouetted against the sky. (http://www.honeyhill.org/cthi.html for a history of the church which dates from the 14th century). 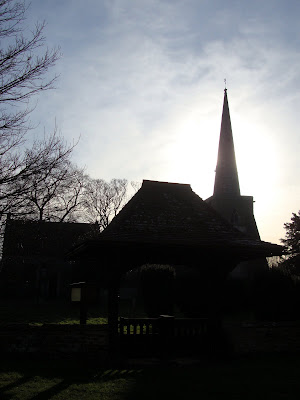 On my return loop I went past an area I used to know well - Longstanton, however there has been a lot of house building in the area and with both the Cambridge to Ely guided Busway and the extra houses some new "bypass" roads have been built. It must be difficult for the GPS mappers to keep track of all of the changes, but I follow the road not the GPS. I stopped for a drink and some chocolate, good cycling food (my excuse). I used colour-popping to bring out the interesting colour of this pump from its surroundings. (I drank from my water bottle though). 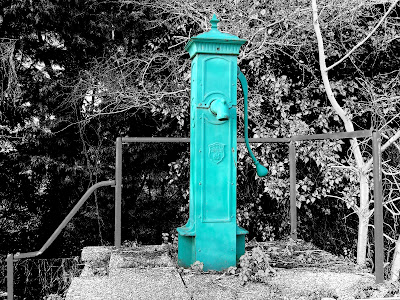 One of the less pleasant aspects of cycling in the Winter is that it makes my nose run and although I have occasionally had to resort to blowing my nose without a handkerchief it is not something I find pleasant. (You go through all the normal motions but expel the nasal contents backwards onto the road, hopefully not when being followed by another cyclist. The route took me past Oakington Barracks along which motor traffic is only allowed for access purposes, it is amazing how many cars/vans need to access it. Car drivers are only to ready to complain about other roads users infringements or the laws (eg. cyclists going through red lights - not something I condone either by the way), however they are only too happy to infringe other rules when it suits them! Sorry rant over, when cycling through Cambridge I saw a few vehicles go through traffic lights as they turned red, I think that all road users are getting more impatient nowadays.
I had to pop into London during the week. I generally use my Marin when I have to leave my bike at the Cambridge Railway station. The day started badly the front tyre was flat, in the end I replaced the tyre with Schwalbe Marathon plus - virtually puncture proof and it has a reflective sidewall. In my haste I did not seat the tyre properly and as I pumped the tyre up the inner tube stared to bulge through. fortunately I stopped in time and re-seat the tyre, otherwise at best it would have popped straightaway, at worse it would have popped someway down the road.
As my meeting was in the middle of the day I did not need to arrive at the station first thing, this meant that getting a parking space for my bike was going to be tricky. (The car and cycle parking at Cambridge station is pitiful, personally I would be happy if they were to drastically cut the spaces for cars, increase the cycle parking provision and provide a park and ride facility for occasional travellers.
There is a cycle shop in the car park yard that provides storage and on that day the shops stays open until 7pm so for a small fee (£1.50) I decided to leave my bike there. It is both quicker and allows me to leave various bits on the bike so I don't have to take them into London. I use an Altera computer bag that neatly clips on the back rack, I also carry a pump, spare inner tube and an aerosol that will both pump up a tyre and seal any punctures. (and lights and cycle computer...)
As I wheeled the bike into the shop I heard a pinging noise from the rear wheel, a spoke had snapped, probably due to having to cycle for a few miles with a flat tyre last year. They could not fix that day it as they were two mechanics down in the shop, so I wound the broken spoke round a good one before I cycled home that night. The next day I replaced the complete wheel and will keep the hub and re-use it later. In this throw-away world it is cheaper to buy new than repair :-( and I have yet to master the art of cycle wheel building.
I have managed to cycle around Wicken Fen once this week in the evening. So here are a couple of pictures. The changeable weather means that weather fronts move through the area - in this picture the blue skies and sun were being replaced by cloud. 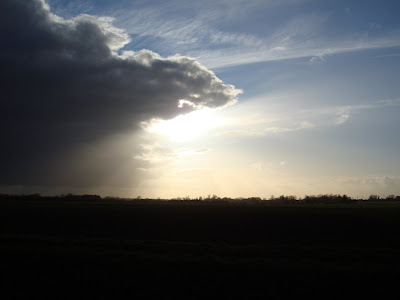 But later on the route the blue skies were back again!