The second time out on my new bike, I decided to try out a couple of new off-road routes that I had seen whilst checking the map. The website I used was: Where's the path? It shows two different views side by side. (Chosen from various OS views through to Google Maps/Satellite views and the Open Street Maps view.) I generally use the OS 50K view alongside the Google Satellite view. Whilst checking out the area I noticed that there was an off-road route out of Balsham on the Icknield Way. So I thought I would give it a go and then perhaps link up with other off-road routes out towards Newmarket/Exning and then back to Cambridge.

It was a pleasant sunny Autumn (fall) afternoon so I headed out to Balsham via the Roman Road from near to Cambridge (the Gog Magog Hills). The is not much climbing around these parts - but the path starts just of the Shelford Road between Cambridge and Fulbourn at 70m so it was a good opportunity to check that I had the low-end gearing about right on my new bike. In India we will be reaching heights of around 2000m so I need a gear I can twiddle in. (A twiddle gear or granny gear is one where the pedals can be spun quite quickly, with the bike hardly moving, it can make a climb up a hill along one, but saves having to get off and walk.) The low-end gearing was fine. When I reached the turn off there was a path closure. A short bit from the road to the path proper was being cleared of vegetation. Judging by the alternate route they assumed that all visitors would arrive by car and be able to drive round the several miles detour. As my aim was to cycle off-road and decided to nip across, all I saw was a fire at the end of the connecting path - not a problem on an MTB. (Note I had got some tools including a pump and some patches in case of punctures or other problems.) 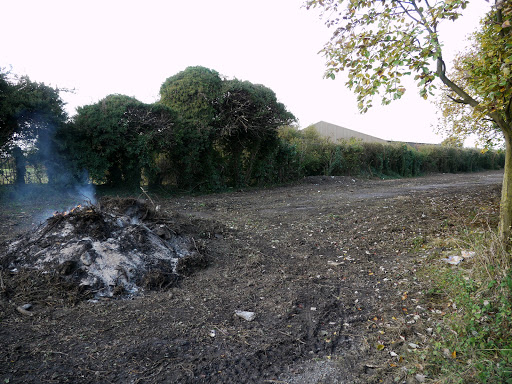 The Roman Road starts of going downhill - the leaves have started turning and a few Beech leaves were scattered along the path. 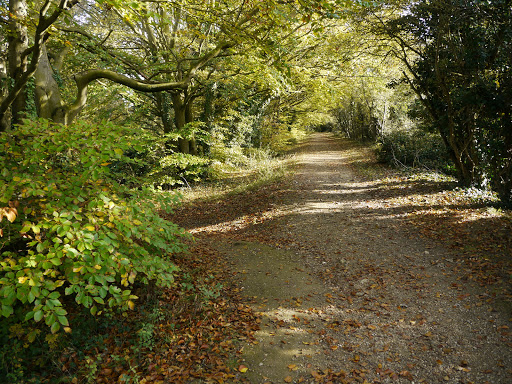 The path undulates and was fairly dry at the start although we have had quite a lot of rain. What is tricky is that there are ruts, presumably worn won by walkers and cyclists over the years. You have to pay attention when cycling in a rut as the front wheel can bounce from side to side. Also if the rut gets too deep then the pedals hit the sides of the rut - which can be a bit disconcerting. On this section you can see that it has not been very windy for a while as the leaves have all fallen straight down from the tree above. 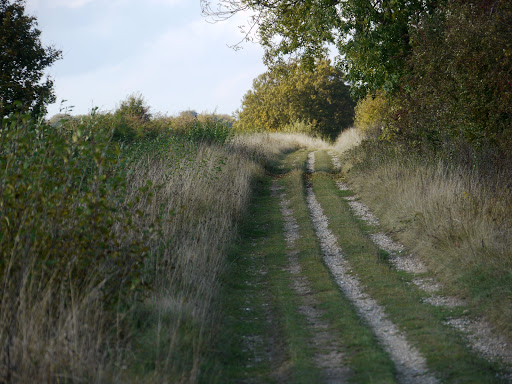 Although Autumn is on its way the trees have a lot of green in them. This clump of "woodland" is in fact where the path crosses over the A11 and a junction has been built. After crossing the A11 I did notice a van that was parked up and a person putting on body armour - off the sort that down hill cyclists wear for protection. 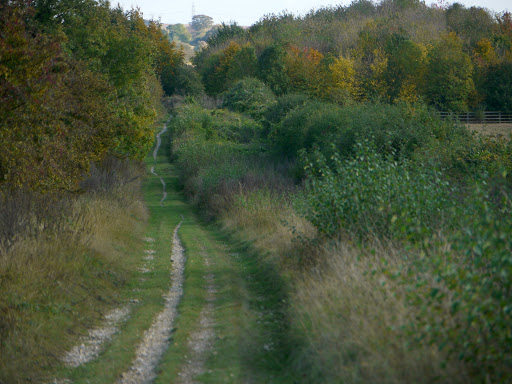 The path passes by Chilford Hall - a place known for its Vineyard and also having Banqueting, Meeting, Conference and Wedding facilities. I once went to a company Christmas do there back in the 80s. The tower is a water tower and sits on Rivey Hill which is 112m above sea level - one of the highest points around. 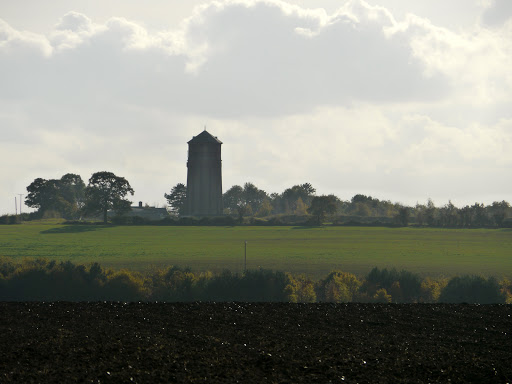 As the Roman Road got closer to Balsham I found the going quite tough, the last time I had been up here it had been dry for ages, this time around the rain had created a slippery mud layer on top of the ground. This had the effect of causing wheel-spin if I pedalled too hard. I was also passed by a couple of motorcyclists - the map shows the Roman Road as a byway open to all traffic (BOAT) so they were within their rights and did not seem to be chewing up the track at all. I then turned off up the Icknield Way towards Balsham and they carried on.

I made the mistake of not actually plotting on my GPS or print out a map of where to head in Balsham and accidentally headed off along a footpath and had to lift my bike over a couple of stiles. Fortunately it took me in the right direction though and I rejoined the Icknield Way - which was marked as a BOAT on the OS map. Here you can see an apple tree growing by the path, thus adding further evidence to my theory that they were seeded by walkers throwing away apple cores. 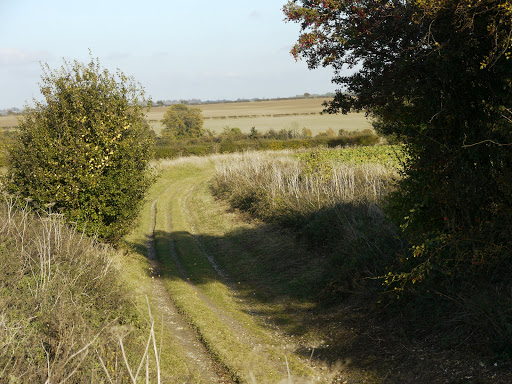 The fields have benefited from the recent rain and green shoot can be seen popping up - I am sure that farmers work fields harder than when I was a boy. No sooner are they harvested and ploughed than another crop is grown. 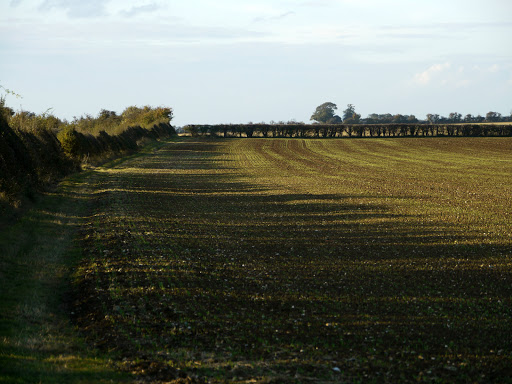 I like travelling along routes I have not taken even familiar countryside takes on a different look. 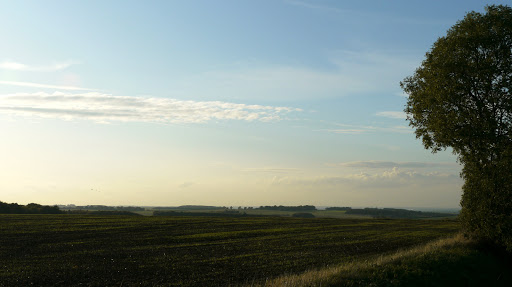 I carried along the Icknield Way , which joined an unnamed road and the headed off along a track - this one was pretty difficult as it also had a surface layer of wet mud as it headed off to Willingham Green. No sooner had I joined the road than the Icknield Way seemed to head off again, so I followed it. At this point I was definitely in unexplored (for me) territory. Not that it was a big deal, I had my GPS with me and could have easily checked the map, but where's the fun in that. The track ended up at a dry Ford with two possible ways to go. I cycled along this briefly then though I would head the other way. 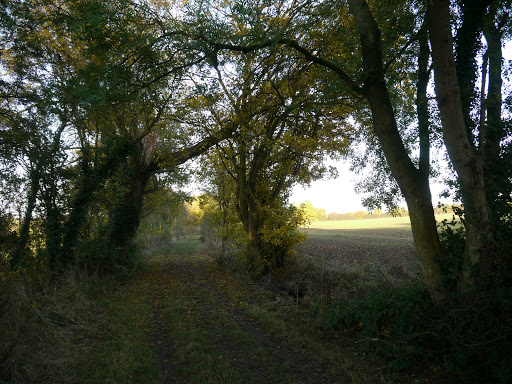 The other way passed along the outskirts of a wood and up a slight hill before turning right onto more open countryside, 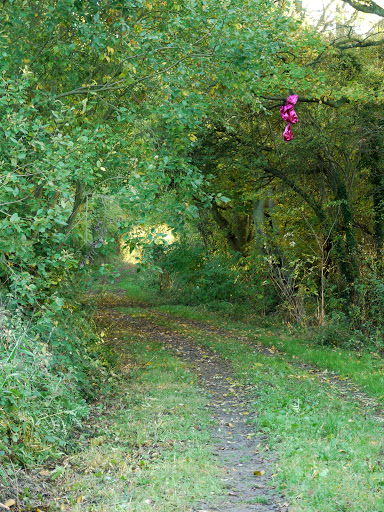 Just for completeness this was the other part of the three-way junction , the direction I had come from. 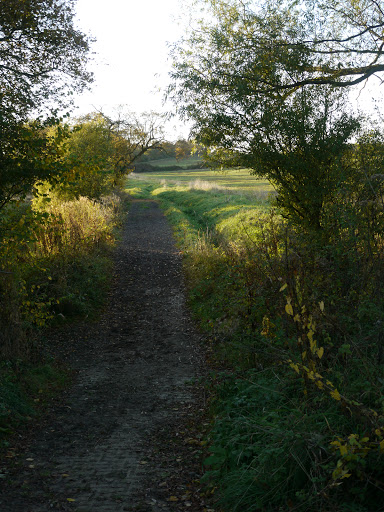 The track eventually became a rough road until I reached a Ford - and not a dry one this time. As I was more interested in cycling along tracks I turned back and took the alternate route. This village turned out to be Weston Green. 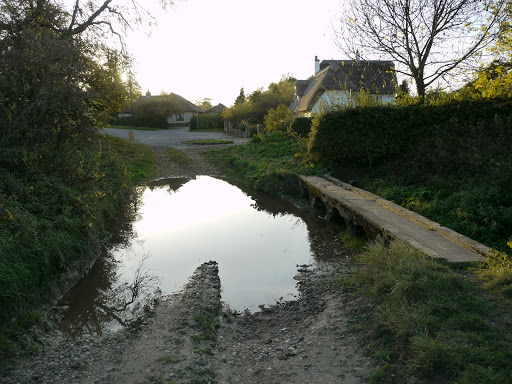 The other direction took me along a leafy lane - which seemed to have a rubble base - but nicely cushioned by the leaves. There were hoof-prints along hear so probably a popular route for horse riders as well. This path eventually brought me to Carlton. 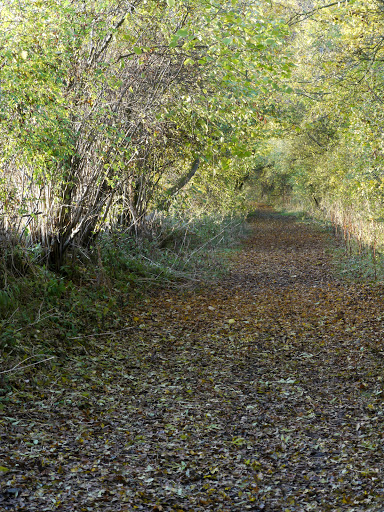 My exploring had taken some time, although I had carried along several other tracks which included one from Woodditton through to the B1061 road near to Newmarket. It was getting dark by then as this picture of the moon shows. 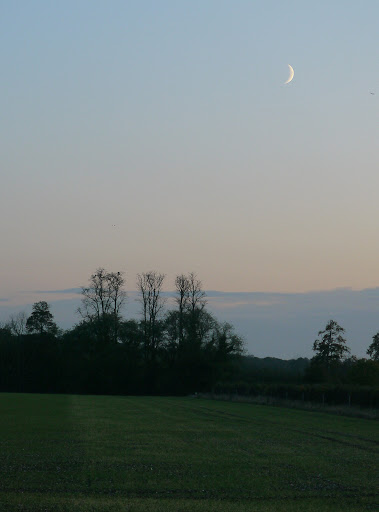 The sun set before I had reached Newmarket, but I had lights and was wearing my fluorescent yellow jacket. I use a rechargeable USE Exposure Lights Joystick. I t has three levels of brightness, with on times from 3 hours to 24 hours and a flashing mode capable of lasting for days. I used the flashing mode on the B1051 - when I can see I think that cars are more careful with an oncoming bright flashing light.

I then cycled through Newmarket and onto Exning where I joined a narrow byway which headed for Burwell. With the light on maximum brightness it was great to be able to cycle along the narrow track in the dark. It certainly gave me confidence in both the light and the bike. Once at Burwell it was the Sustrans 51 back to Cambridge.