just to show how windy it is as I passed a field near Lode there were a bunch of Power kiters out flying their kites. It was a few fields away so the picture was taken at full zoom and I've cropped the picture to enlarge it. Here are two kites and their flyers hanging on tight. I have seem kites flying in this field before - but hadn't realised they were Power kites that you can literally fly with. 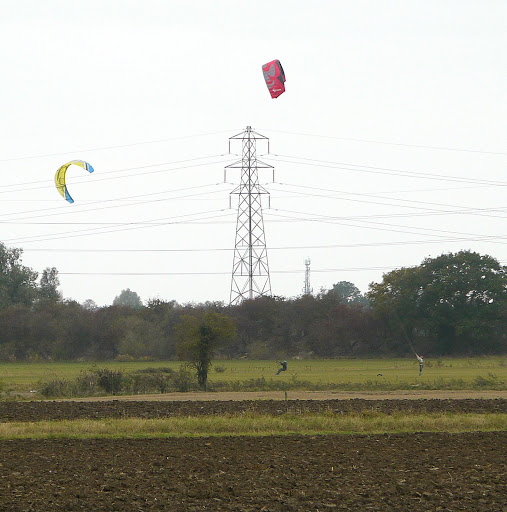 It was a short cycle ride today as my son was visiting for the weekend and some of the cycling gear we had ordered over the last couple of weeks on the Internet did not fit. He has a long body and the medium t-shirts were too short. So I returned those and we went off to Ben Hayward's new shop in Horningsea - it is larger and there is plenty of parking available. Once there we kitted him out with some cycling gloves, a helmet and some cycling tops. They were, as usual very, helpful and persevered until we had found some gear that both fitted and he found acceptable. The good news was that the short-sleeved tops had 25% off as it is the end of the UK summer season. My son was also not too unhappy with his helmet. When cycling in foreign parts I think that it makes sense to wear a helmet, but in hot weather you need something that is light with plenty of airflow. Fortunately things have improved greatly since my son last acquired a helmet so he was quite pleased with the result. I was paying so I also set a budget as he went for the most expensive helmet in the place, without knowing it though.

Today was both gloomy and windy so I did not take may pictures, one bright spot was this pile of carrots, it looks as if someone forgot to stop the conveyor belt! 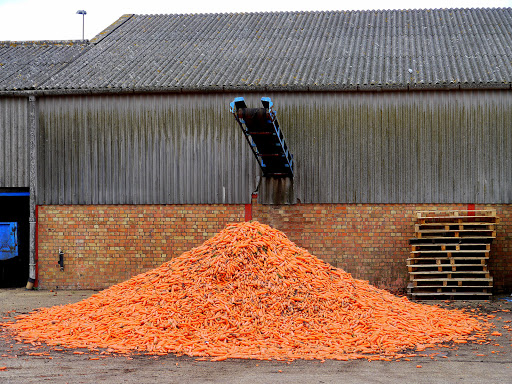 Next to the carrots were some pallets (the crates of the title) - the only other bit of colour on a gloomy day. Although I did turn up the saturation to boost the colour though. 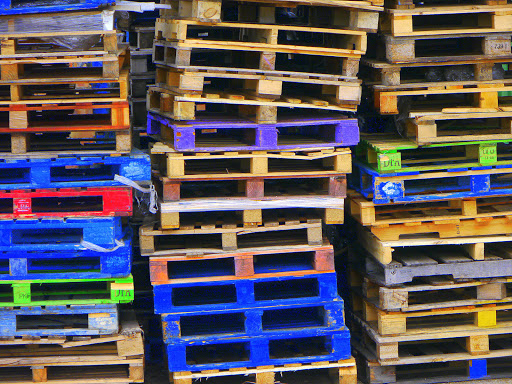 Only two weeks to go before we head off to India. The new bike is due soon, I must get a suitable suitcase, arrange bike insurance - but most things have been sorted. This week I arranged a hotel In Bangalore as we have an overnight stop there. I must make a list and start ticking things off. When I was travelling a lot I used to pack the morning of a long-haul flight - it mostly worked although i did once end up in Japan without any socks. I had to pop into a department store and with limited Japanese buy some socks. I ended up comparing feet with a Japanese shop assistant who then showed me what to buy. They were great socks - but even though they were on sale they were still expensive.