Back Cycling in the Fens

For some reason I find it quite hard to readjust to normal life after the simple life of eating, sleeping and cycling on a cycle tour. I also find the jet-lag a little harder to deal with than I used to. This means that it takes a bit of a push to get back into my normal cycling routine. Of course it is not helped by the difference in climate between here and India, nor is it helped by the fact that it is dark by around 4pm, nor is it helped by the windier weather, nor (insert loads more reasons) .. You get the picture, I find it easy to dig a pit of reasons why not to cycle - when the obvious "cure" is to get out on my bicycle again Which is finally what I have done after a week or so of doing other stuff.

I have also been thinking about cycling and what it takes to encourage or discourage cyclists. This post on David Hembrow's "A View from the Cycle Path" entitled "Beauty and the Bike" got me thinking - it is about a film contrasting the experiences of German and British female cyclists and poses the question "Why do British Girls Stop Cycling". Also David in an earlier post "Three Types of Safety" discusses the differences between "Actual Safety" , "Perceived Safety" and "Social Safety". I won't repeat his definitions here - but most pundits seem to focus on the factor that deters would-be cyclists is perceived safety. Indeed some go on to argue that it is getting safer and quote various statistics to prove their point.

Actually I think that there is another factor that colours my desire to cycle. It is something I recognised in India and have since realised affects where and how I cycle in the UK. What I felt in India is that in many ways the roads almost operate as a caste system with cyclists pretty much at the bottom - cyclists are disregarded and expected to get out of the way. In the UK that situation certainly exists - cyclists are seen as a nuisance - but increasingly I feel that there is a growing hostility towards cyclists. Although certainly not all motorists exhibit that behaviour there is also a degree of passive-aggressive behaviour toward cyclists. We are on a slippery slope - this behaviour has to stop otherwise we will find cycling an even more marginalised activity. There is still time, there are a lot of considerate motorists.

One other factor that causes motorists to be uncomfortable with cyclists is that some drivers are barely up to the task of controlling a motor vehicle safely under ideal conditions. Throw in night, rain and a multitude of signs and they are overloaded with input - that is why they are so unhappy with cyclists - they become another factor they cannot cope with. Actually this occurred to me as I was driving around Cambridge one evening - yes I do drive sometimes. You have to pay attention and drive with care - not difficult really.

What actually happens is that we are encouraged to consider the roads dangerous, we are castigated for not wearing helmets - yet most cyclists do not kill themselves - that role is taken by the motorists, but we are encouraged to consider it our fault for not wearing a puny helmet or bright yellow clothing. Mind you when we do wear such things and still get knocked down no-one cares.

So what does this all mean- well for me I get my cycling enjoyment from the quiet roads. - such as this one in the Fens. It has suffered a bit from subsidence - but that works in the cyclists favour - it makes it difficult to drive quickly but has little affect on the cyclist. The last time I cycled down here there were more leaves on the trees though. 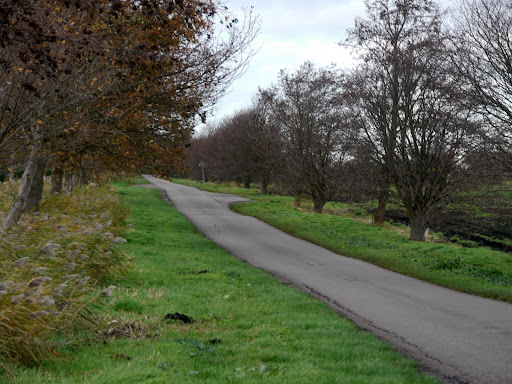 I carry lights when out cycling in the afternoon now - it gets dark around 4pm, but it does mean an opportunity to get some interesting pictures of the sun setting - like this one where the sun is "beaming down on the trees". 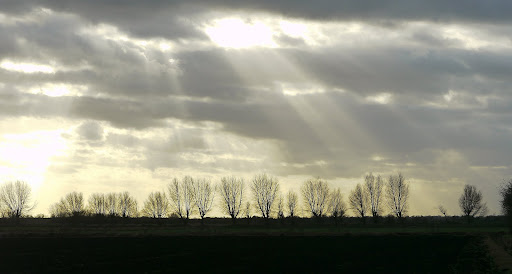 Here is a picture taken whilst cycling along Sustrans Route 51 in the Wicken Fen Nature Reserve. Last time I was here the field was dry - in a little over three weeks it has returned to a flooded state. 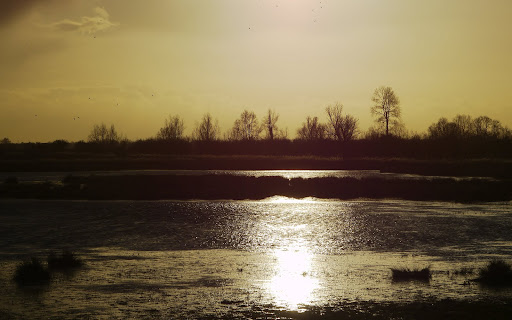 You also get to see Highland Cattle wandering around here - although perhaps I should call them lowland cattle. 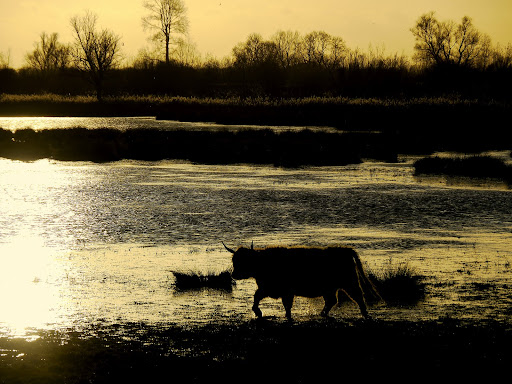 On the way back through to White Fen I was stopped by a couple of guys in a pickup. A horse had thrown a rider and although the horse had returned they were still looking for the rider - who had fallen near to water. I think the rider had managed a phone call - but it sounded as if they were injured. They then shot off up a track so I hope things were OK. I would have offered to go searching if they had not looked as if they knew where they were looking.

I also saw a deer crossing the path ahead of me, it then went running of through the fields. So there are benefits from the early nights. I wore cycling shorts - but if it gets much colder I will shortly be wearing leggings