This was our last day in India before starting the long trek home - although we would overnight in Bangalore tomorrow because of flight connections.

I have also switched back to using Zoundry Raven. When on the road Microsoft LiveWriter was very good - it has a few quirks - sometimes the text, when a Post was published, would appear in a Times Roman font rather the Arial font as it appeared in the off-line version of the Post. I have also noticed that the image size and so quality is reduced by LiveWriter. This is a minor nuisance because storing photographs on Picasaweb is a useful back up when travelling in case of computer failure and or loss. It does speed up the download of Posts when using low Bandwidth connections though. What I have decided to do is download all the relevant pictures directly onto my Picasaweb storage at the original image size and quality and if anybody wants a link to them directly I am happy to forward it. Actually there is an album per Day so there are a group of links.

Finally I mentioned Bob's gift to a local orphanage - he write about it in his blog.

Raj was offering to take the group on a Tour of Fort Cochin at 9am. I decided I needed to pack my bike away in its box for the trip home and so would give the tour a miss have a leisurely breakfast and then pack the bike. Ben - as you might guess thought that he would have a little longer in bed.

In the end I got up just before 9am just as the others were planning what to do after the Cycle part of the trip was over. Jim and Mary and Alan and jay were flying early Saturday morning and Mary, Barry, Christine and Denise were going on a tour arranged by Raj over the weekend. (As it turned out the tour was hampered by the fact that some of the places they were intending to visit were closed on a Saturday morning.)

I had an omelet and despite asking for black coffee got black tea - they just don't seem to believe that it is possible to drink tea without milk. It was quite pleasant, I also ordered for Ben who said he was coming down soon. He turned up a little after his breakfast and discovered that the pineapple marmalade was a bit musty in place - after I had eaten some on toast. either my taste buds are going or the marmalade was only off in places.

He disappeared back upstairs to the comfort of our chilled room whilst I wandered around the back of the hotel to pack my bike. It was fairly straightforward, except for boiling hot sun. By the time I had finished my t-shirt and shorts were soaked in sweat. I had to rest for half an hour in the chill box (bedroom) before changing so that we could go out for lunch and buy a few gifts to take home.

When I took the seat and seatpost off I had to tip the bike up as there was water inside the frame. A sign of the amount of rain we must have had. 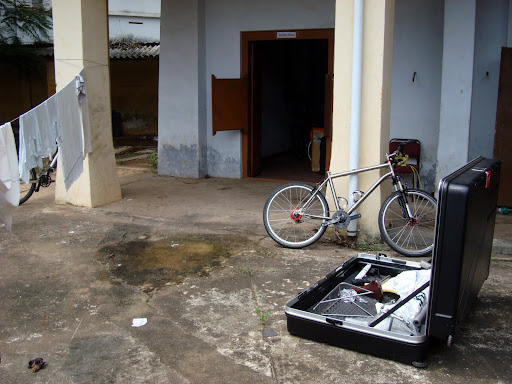 The back yard was overlooked by a school behind the tree - well it sounded like a school. The yards was also where they burnt rubbish - but it did have a lockable bike shed. 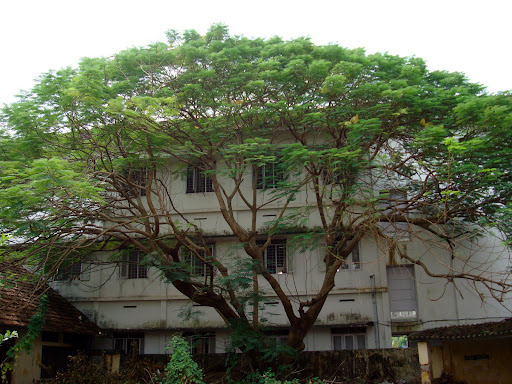 After packing the bike away and changing out of my sweaty clothes (fortunately the fan and air-con had dried the bag of damp clothes I had been carrying with me) we set of for lunch. The bedrooms were set around this room. 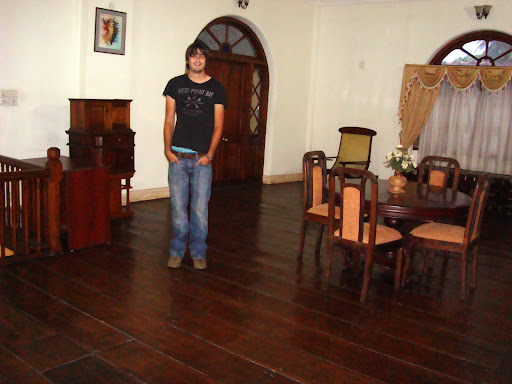 For convenience we stopped at the first restaurant we saw on the way into town - it had cold beer which was a plus point, it also had more foreigners than Indians which was a negative point. Even worse for Ben the foreigners looked as if they we ageing ex-hippies. The menu choices were ok though and so we had Indian food.

A note on the menu did make the point that after your order had been taken the kitchen could not be cancelled. I should think not! 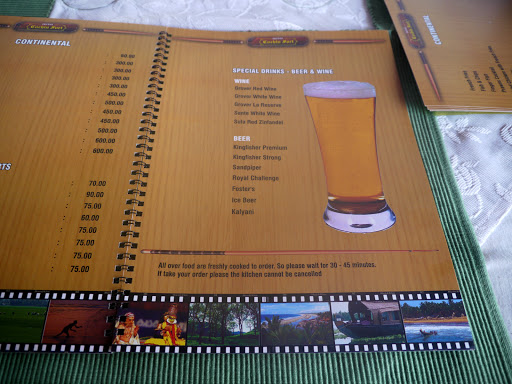 The town was on the coast on a river inlet. We passed quite a lot of fishing nets set up to catch fish. 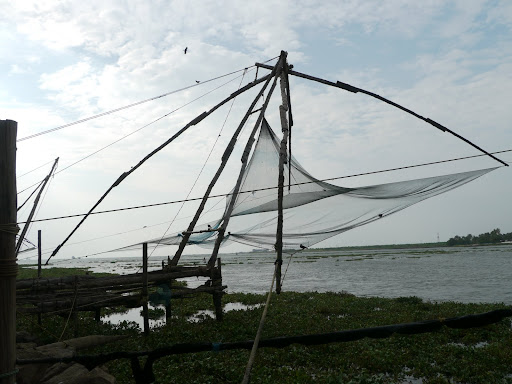 It also looked as if we had missed the carnival. 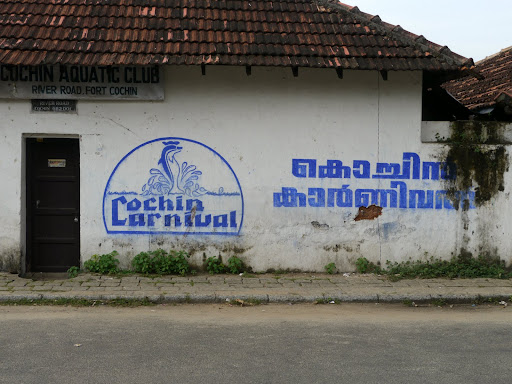 There were quite a few big ships sailing up the river to the loading docks. 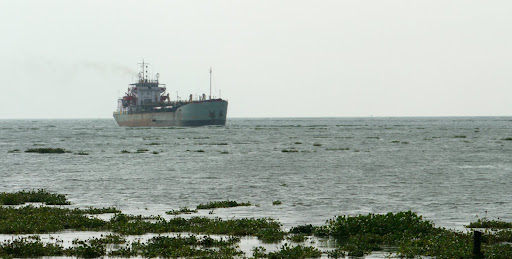 As is not unusual the area had several master including the Portuguese followed by the Dutch and then the English. Being so close to the sea it had cannon to defend the town from attack. They could have used coconuts for projectiles. 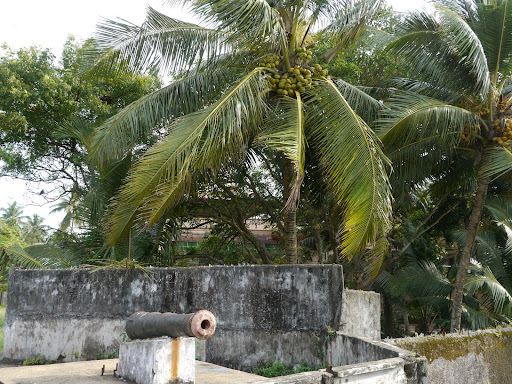 Although it was a Saturday it looked as if the schools ran lessons - at least in the morning. After school these girls had to look after a younger sibling. 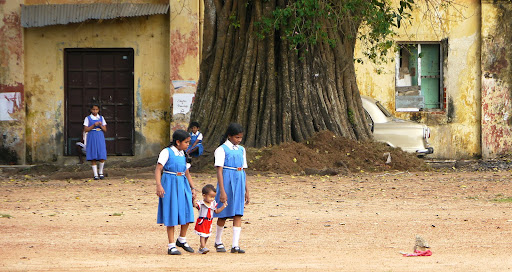 Although we wanted to buy some gifts we had a stroll around first. This is the inside of the Santa Cruz Basilica originally built by the Portuguese. 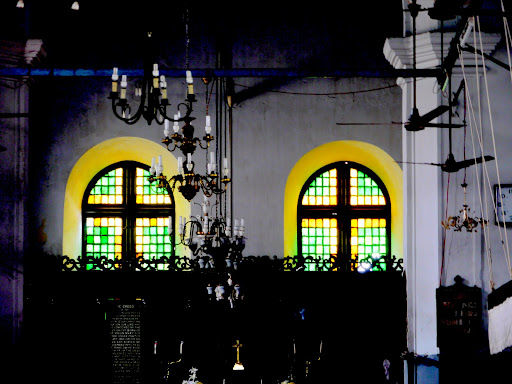 A couple of guys selling fish - from a makeshift stall. It does not look too bad - but presumably spoils quickly in the heat - one of the reasons I become a pseudo-veggie. 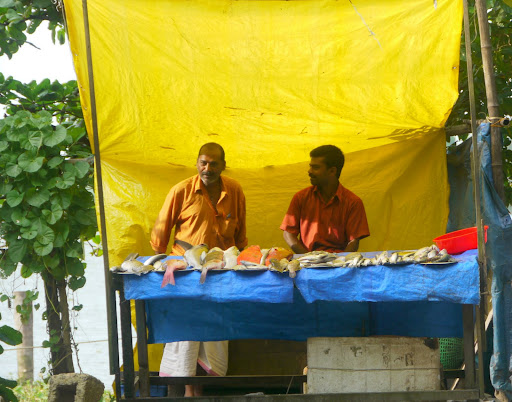 On our stroll through the streets I took pictures of anything that caught my eye - this lad smiling through the bus was too quick to be caught before his thumbs down gesture, but he was smiling. Judging by his clothes he looks as if he is on his way back from school. 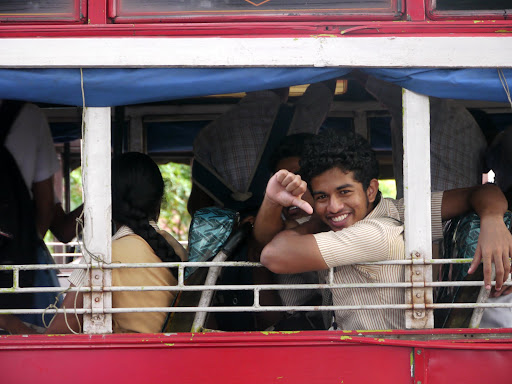 I always like a good fruit stall. Ben bought a couple of custard apples which we took back to the hotel. I have tried them before - it was his first time. They do indeed taste like apple and custard - but they had loads of quite large black pips. In y opinion they are too much hassle to eat. 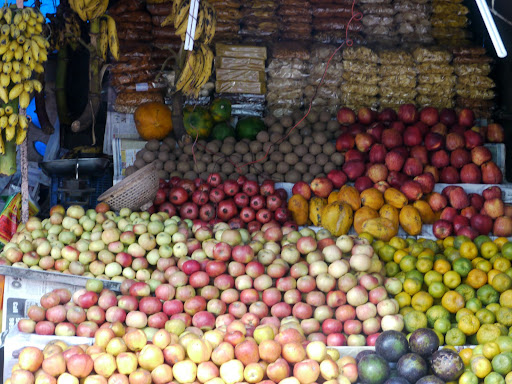 We also bought some gifts - scarves, bags, bangles and in Ben's case an Indian pop Video CD for one of his friends (they compete to give each other weird and useless objects!)

We returned to the Hotel for a rest before meeting up in the lobby at 6pm for our drive through to the Final Group Dinner. As we sat there there was a loud wacking noise - slightly disturbing. It was a coconut hitting the ground after falling from a tree in the Hotel grounds - I can see why they did not want me to wash my bike underneath it now.

Dinner was a few miles away in a restaurant with classical European style rooms. Of course we had to have the obligatory last group photograph. For some reason Barry and Mary had things to do before dinner and so were delayed - so they are not in this "last" picture.

The meal was made more interesting as we had a power cut. This caused the fans to switch off and the staff brought around candles. The room quickly got very hot which made for a sweaty dinner. We had a first course of sliced tomatoes and onion and sliced tomatoes and cucumber lightly seasoned. The second course was a Spinach pie - which sounds odd but was quite tasty. I can't quite recall the order of the next two course. We had fish which Ben and I passed on and instead were given a second helping of the spinach pie - but by this time the pastry was burnt - presumably they were having problems seeing what was happening in the kitchen. We also were served a plate of unpeeled, but cooked prawns. We of course ate those. The final course was a cinnamon pastry tart with ice-cream - this was only slightly burnt and was very tasty. The lights came back on again at the end of the meal. 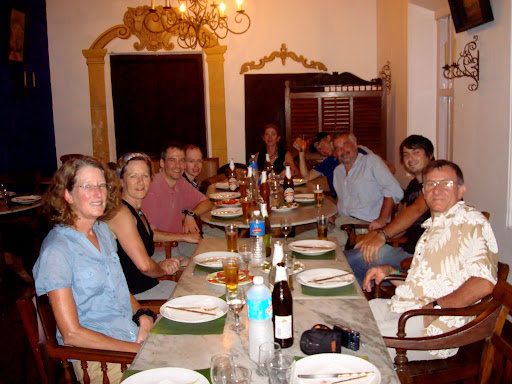 Bob then gave a speech - I think we all agreed that this particular trip had been challenging accidents and unusual amounts of rain. This is the first time so many things have happened on one trip and indeed was the first time a serious accident had occurred. 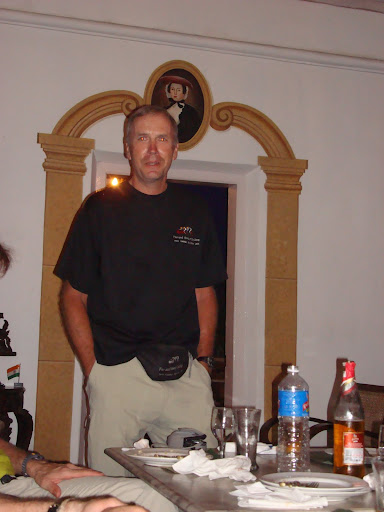 As a parting gift he gave us all wooden carvings of Ganesh - the Lord of Opportunity for luck. Jim took three home - one for himself and one each for Jean and Abby. 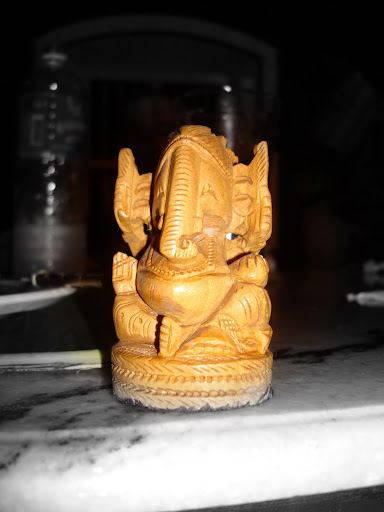 We then thanked our support team and also settled up on various outstanding payment items. It was time to pay for the rental bikes and also to collect tips for the support crew. It is customary to give around $50 per cyclist and they had been pretty diligent in their support. Except for Ben's bike - however given the problems with it I was not charged anything for it. Renting bikes is a pretty hit and miss affair. 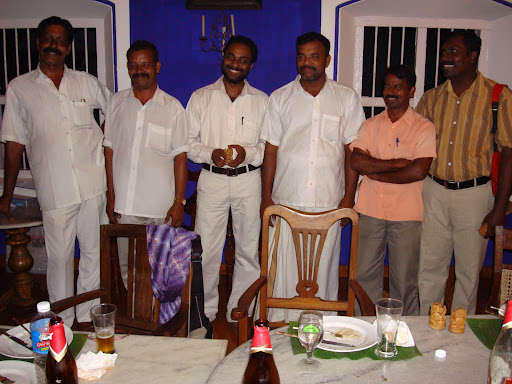 Here is a screen shot showing the cycling we did in India. We started on the bottom left with a shake-out ride near Trivandrum. We then caught the train to Madurai - form there you can see our path back to the coast at Fort Cochin. All in all 650Km/400 miles. 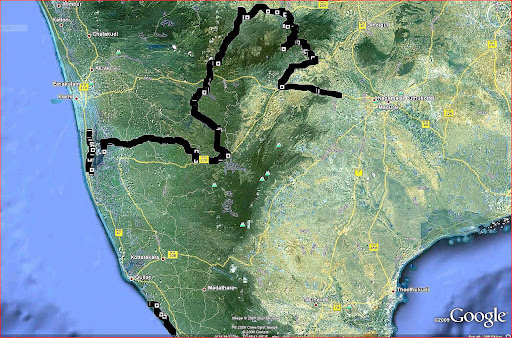 It was certainly an interesting ride and a great way to see parts of India that are off the beaten track for tourists. The last thing Raj did was make sure we all had arrangements to get to the airport tomorrow before we headed back to our hotel for a round of goodbyes - it is always quite sad at the end of these trips. We start of as strangers, but the shared experience forges a common bond.