A visit to the Phone Box (Gallery)

Saturday, 23rd April: After doing a bit of collection and delivery yesterday (picking up my son and his books and washing and bike and… and…) and sitting in the car for what seemed like hours (it was at around 7 hours) I was allowed out to enjoy the glorious Easter weather.  So where to go?  Well although it was not long since I had visited the Phone Box Gallery in Prickwillow it was another month and so there would be a new Exhibition on display.  When I checked the Phone Box link just now (26 April) it was still showing the information for March. Maybe I should have checked before I set off.  A quick look at the map and I decided to take a similar route to a previous visit. I overshot Ely and then cycled back down a byway alongside the River lark.

I had unfinished business there as the last time I was intending to cycle down a route to along the south bank of the river but wasn’t too sure quite what was possibly a driveway and what was byway so I took the North byway which I had been on before. This time around I was not going to be put off until I found the right byway.

The other advantage of this route was that it was reasonably ok for cycling, quiet lanes and fairly reasonable off-road and only one unknown chunk of byway to explore. Most of the time byways are pretty reasonable, it is the bridleways than can be a bit unpredictable for cyclists. Here is the Bike Route Toaster Link to the map shown below. There is one bit of fast-ish road, it is straight but I found that cars tend to give reasonable room on it. The route is 86Km/ 54miles long and pretty flat even by the flat standards of the flatlands.  (It varies from 0m to 19m above sea level.) When I went out it was so sunny I put on some sunscreen and there was almost no wind whatsoever. This ride is not so good when it is windy as the Fens are pretty exposed, for choice it is better to cycle out against the wind and back with the wind.

It pretty much follows NCN51 through to Quy and then switches to the Lodes Way (via the disused railway line along the back of Anglesey Abbey)  to Wicken Fen and then NCN11 to Ely. I don’t like to cycle back the way I go so it then loops back down to Isleham, Fordham and then Burwell with a bit of off-road before re-connecting with NCN51 in Swaffham Prior. 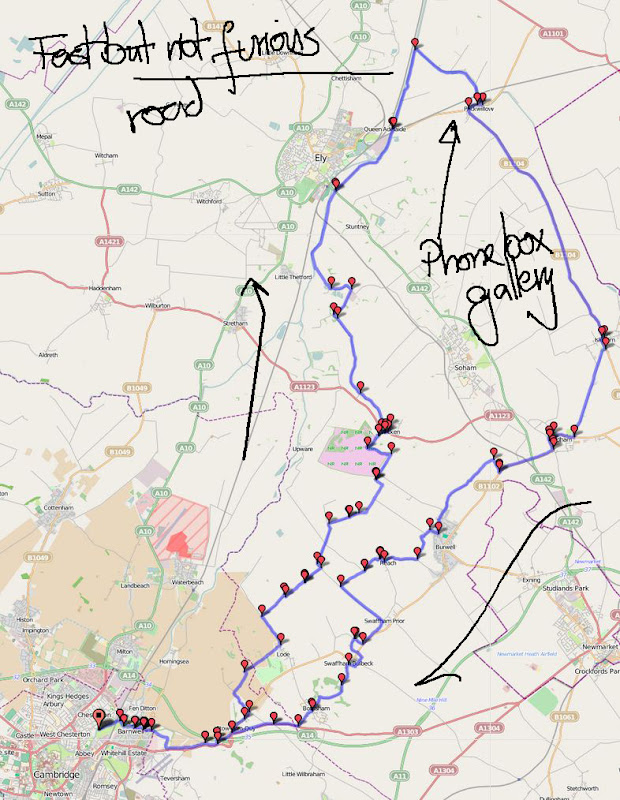 As I cycled up to White Fen out of Lode alongside Bottisham Lode I noticed three cars parked where the road widens slightly to allow vehicles to pass. Rather strangely there seemed to be a line of people walking along the Lode – yes along in the water.  I am not sure what they were doing. They had walked a reasonable distance it the mud stirred up in along the lode was anything to go by. 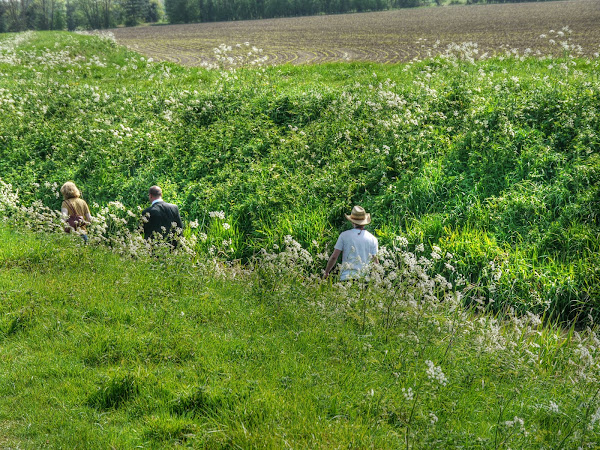 I had passed them before my brain registered that this was a strange sight to behold and I really ought to stop and take a picture.  Here are a few more of the group, they had someone on the road taking pictures and the chap pointing at me seemed to be telling their camera person to take a picture of me. I had had a look on the web but can’t find any reference/pictures to this event. 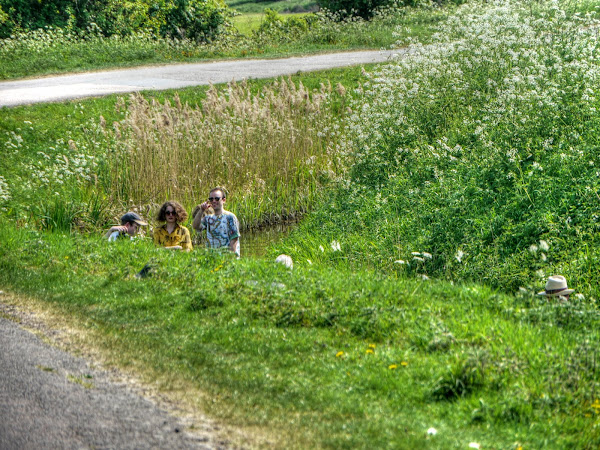 A little bit further along Lodes Way the work to create a wet grassland habitat is making good progress in Burwell Fen.

The various diggers seem to be using the old buildings called Burwell Fen Farm as a staging post. 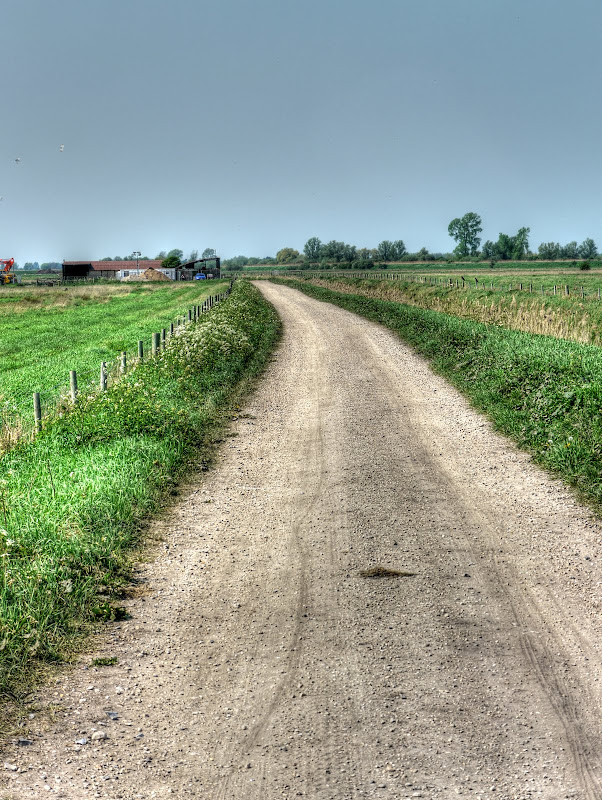 MikeC has mentioned that various of the gates on Lodes Way had been taking away for NT branding. Now you could be forgiven to think this meant some form of marketing – well here is one of the gates after being branded, I think that the Wicken Fen NT people ought to treat themselves to an “NT” branding iron. 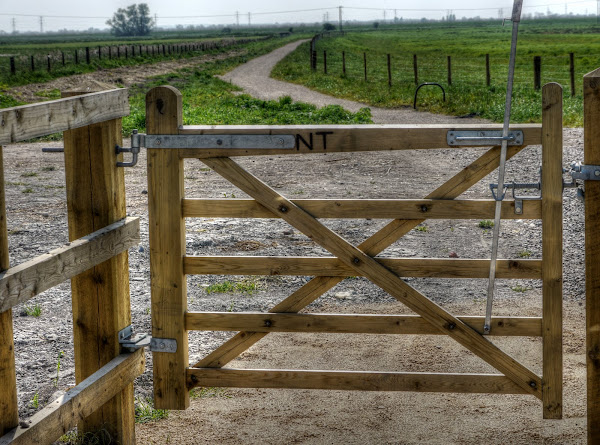 As I walked over the bridge over Burwell Lode a quick reminder of just how clear the skies were.  The Lodes Way can be seen as the beige strip before it heads off to the right. 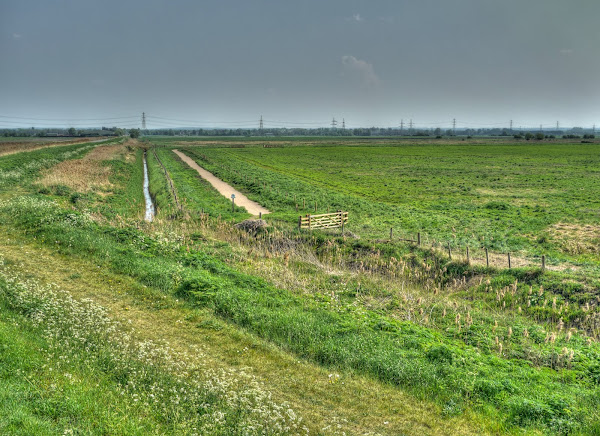 Another picture taken from the bridge over Burwell Lode, this is looking upstream. Look how smooth the water is – no wind. 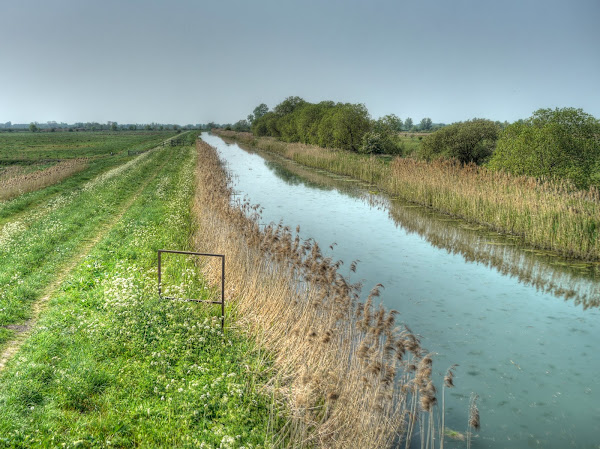 After cycling through Wicken Fen and Wicken the route takes to a country lane along to Barway. Along the way there are fields of oilseed rape growing, edged by verges of cow parsley. 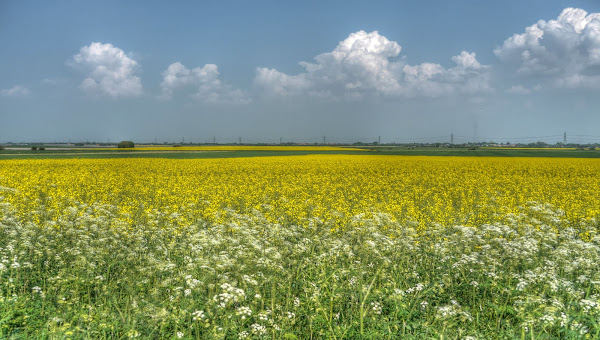 At Barway the route then heads along a track to join a tarmac path alongside the River Great Ouse. The last time I cycled by this field (the first after leaving Barway) it was still covered in plastic. The weather has been so warm the crops have shot up and strips of the plastic have been removed. (I am not quite sure what the material is really.)

On the outskirts of Ely I carried on along Queen Adelaide Way (opposite the place where NCN11 reaches Stuntney Causeway (A142). After a short while the road runs alongside the River Great Ouse after passing under a railway bridge and over a junction the road becomes very straight with the occasional kink. The first is past Clayway Farm Cottage and the second by Daisy Hill Farm. The second is where the River Lark joins the River Great Ouse. At this point it heads back down to Prickwillow. As I mentioned earlier there are byways on each side of the River Lark. This time around I found the one I wanted and despite the fact you seem to be cycling into someone’s drive you do actually pass around the house and garden.

The path was a muddy and solid track. It was slightly bumpy with some tractor tread imprints but not too bad to cycle along.  As you might have guessed this line of Pylons makes it way pretty much straight to the Burwell electricity substation and then onto another Substation at Stocking Pelham one of the Pelhams where if you follow the link an attempted theft of £20,000 of copper was foiled at the back of the National Grid (8th February 2011). 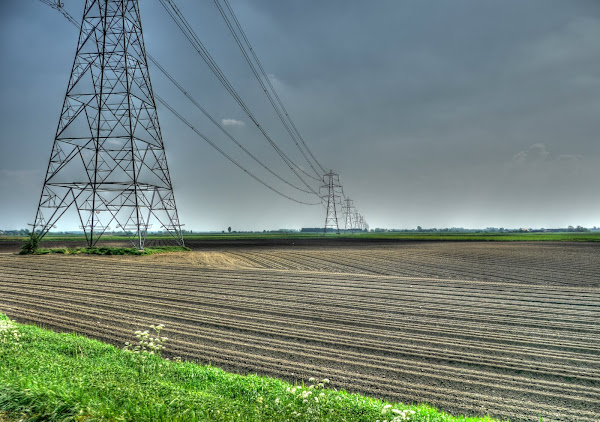 This is the byway, with the River lark to the left and Prickwillow in the distance. You can just about see the tractor tyre imprints. 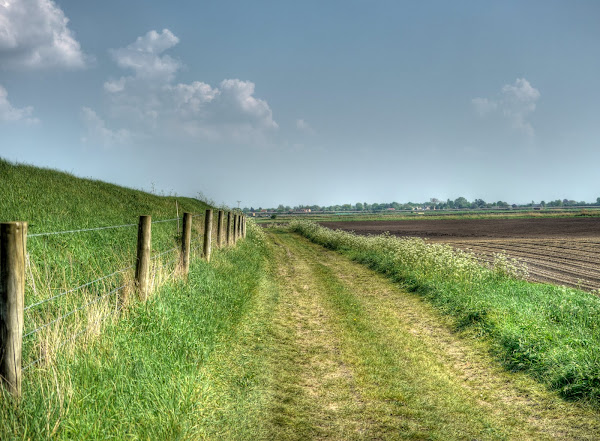 As is often the case there were some dilapidated farm buildings along the way. There didn’t have a name on the OS map. 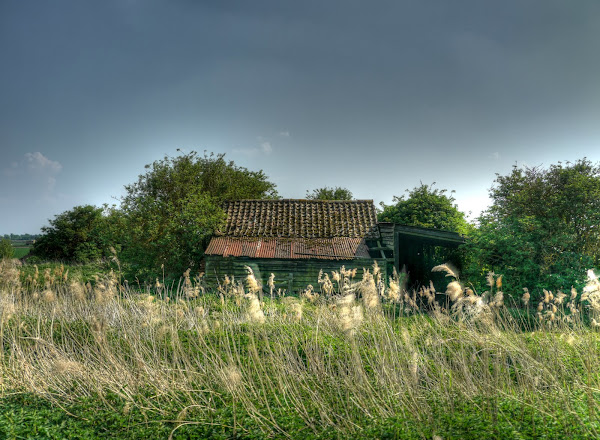 The map shows that the track is called Padnal Bank as you get closer to Prickwillow. An interesting house pops up on a search for Padnal Bank. The Ely to Norwich railway line passes over that bridge, also known as the Breckland Line. I have passed over this bridge quite a few times (on the train) but never put two and two together. It is surprising how different places look from the train compared with the road routes. 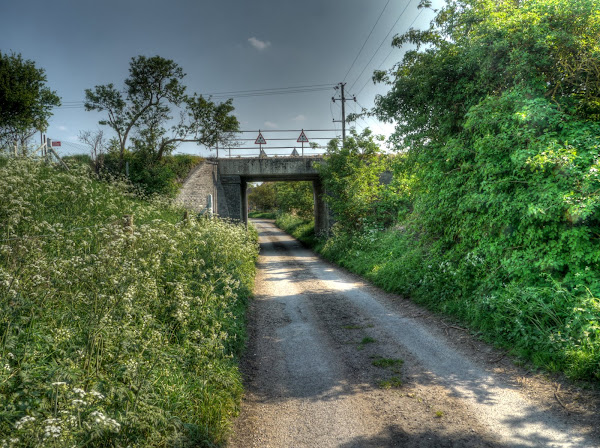 I stopped to have a look at the latest Phone Box Gallery Exhibition. The website does not seem to reflect April’s exhibition.However a couple of links pop up – Anglian Potters – Sonia Lewis and this one from the Craft’s Council - Sonia Lewis of the Old Pottery Prickwillow. 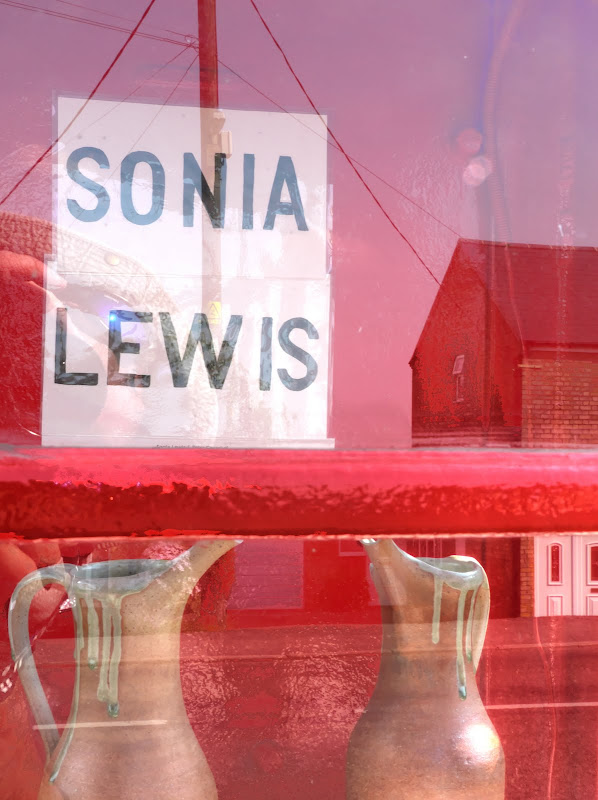 Here are some of her pots. It is quite tricky taking pictures through glass, especially on a sunny day when you get lots of reflections. Next time I will take along a polarising filter to see if that helps. 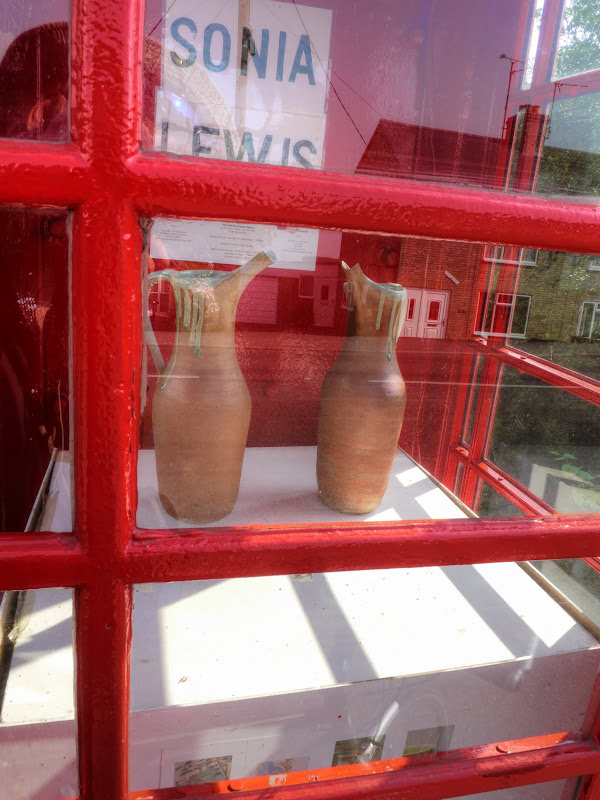 After that it as time to head home, not the shortest way, but via Isleham, I think I was late so needed to hurry up a little, which is why there are no more pictures. My notes do mention that I passed around 30 or so other cyclists once out of Cambridge and not just on Lodes Way – which is good to see.

I also almost swallowed yet another fly, but after much coughing and spluttering managed to spit it out. How can such a small insect cause such a problem.