A Tale of two stations

Monday, 22nd August: Well my browser is clogging up with “interesting cycle-related snippets” so I’d better get rid of a few otherwise I’ll never get them under control.

Since I generally start with CGB (Cambridge Guided Busway) news here it is; the “Guided busway is boost to town’s traders”. Well if you are the town of St Ives anyway, whilst that might not be music to the ears of the shopkeepers in Cambridge it either demonstrates that opening up the route of the CGB is seen as beneficial – or maybe it is just the honeymoon effect. Note I didn’t make a value judgement about the CGB versus re-opening the railway line – but my view is that the CGB was pushed because out railway system is mired in politics, bureaucracy and inefficient practices.

If you are looking for a present for the cyclist who has everything then how about a “bicycle sweater”. Well I think they look neat, although the bike would presumably get heavier when it rains.  After all isn't cycling supposed to be a fun and healthy activity, surely it can’t be so dangerous you would have to wear experimental safety gear.  Mind you if we think it is bad in the UK  then it seems much worse in Australia with their “unsubstantiated bicycle helmet law”. New Zealand seems to have it bad as well – a “Coroner suggested that cyclists could pay for safer roads” after a fatal accident when a motorist lost control of her vehicle and hit three cyclists. I guess I am lost for words – are cyclists just collateral damage?

I did like the cartoon in this article “What to say when a driver shouts at you” confront anger with the unexpected, I like it, I don’t think I’ll be flashing shouting motorists though.

As I write this we are already into the bank Holiday and I am sitting at home, so I must be a “staycationer” and not a driver of one of the 16million vehicles hitting the roads. Apparently there will also be 3,428 buses running instead of trains because of rail works. If so many people are taking to the roads then we can’t be that bothered about petrol prices after all. even though the UK petrol prices are the third most expensive apparently.

Whilst on the subject of motorists who seem to feel that cyclists are at best, second class citizens of the road don't read this article in “this is Derbyshire” – “Cyclists should pay their fair share of tax and insurance” – what happened to decent and honest journalism, or perhaps only the BBC has to adhere to those standards.Perhaps we need Journalism licenses and we should tax journalists by the word – that would surely save newsprint and the planet.

The trouble is we humans like to categorise things, “Lycra louts”, “White van drivers” and now we have “iPod Zombie". Ignore the lack of evidence just hang you argument onto a nice sound bite. It makes me want to cancel my AA membership (although I am only an associate member as it happens). Cars are noisy, dangerous, intrusive and polluting, facts we seem to ignore. The reason we do (and yes I certainly do) is because they have some benefits but – but we seem so wedded to personal motor vehicles that we blinker ourselves and choose to consider all the other road users to blame.

Indeed we are so wedded to cars that you would imagine that Eco towns are designed not only to encourage cyclists but to discourage us from driving – well that is not necessarily so in Upton, Northampton apparently, which has had to have a £17million road built.

Talking about blame, apparently “women waste 50 BILLION litres of water a year shaving their legs in the shower”. Thames Water is the source of this knowledge. So perhaps we ought to have a leg-shaving tax applied to cyclists. I have never shaved my legs for cycling, I am not really sure why it is done – but at least I now have a reason – I am saving some of that 50 BILLION litres of water.

I don’t wear high heels but non-cyclists probably get very uppity about cyclists who do – well on a positive note cycling isn’t all about Lycra and louts – Here are some rather nice pictures of Kelly Brook showing that it is the front of the foot that pushes down on the pedal.

So Monday was another day when I had to go to London – this time around I was not going to get back until  the evening and so was going to have to lock my bike up in one of the high-quality crap cycle parks that they have at Cambridge Railway Station.

To reduce my blood pressure I once again took a route through Coldham’s Common. This time around I went up a little further and then back into the Common past the Abbey Swimming Pool. I learnt two things about the car park there – there were some travellers using it as a temporary stop and that is where my daughter learnt to bay park.

I seem to remember that the cycle path had a gate the last time I cycled this way – now there is a cattle grid which does make it easier when cycling. People who don’t cycle really don’t get why cyclists hate to stop do they?  They ought to try it sometime.  The cattle grids do make it easier but they have to be treated with respect, I have on occasion had my back wheel slip a little when using entering  Ditton Meadows  - actually a link to the Cambridge dragon Boat festival to be held there on September 10th.

At the moment there seem to be cows in all three grazing areas – which made me think.  Not so long ago I remember reading about a concerned resident of Burwell whose son was intimidated by the Koenig ponies. Yet here in the City of Cambridge there are quite a few Commons with cows grazing. So it seems the city-dwellers are more comfortable with large animals that the country dwellers.

This time around I managed to get the cows in my picture of the cycle route from the Abbey pool. 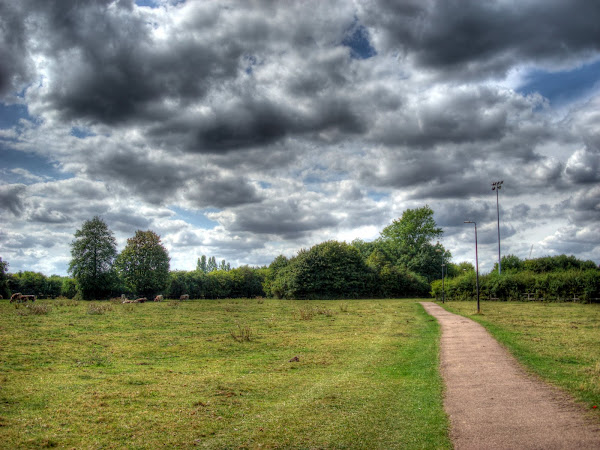 I was pleased to hear a bell tinging as I crossed over the railway bridge over the Cambridge – Ipswich railway line on the Tins route – that was courteous cycling and was answered with a ting back.

As I cycled in to the Station car park from Devonshire Road I was wryly amused to see quite a few car spaces there – and here are a few under the Carter Bridge to give you the idea. 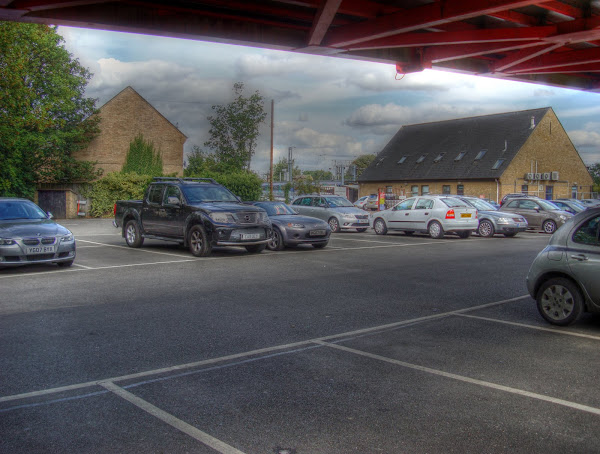 To be fair there were a few cycle spaces as well – although not that easy to find or get to. At least it was dry so I didn’t risk getting mud on my trousers as I walked up through the narrow path between the bikes.

My bike is the one with the Altura bag on the bike – which I took with me of course. Even when there is a space it is not that easy getting you bicycle manoeuvred into it. Perhaps cyclists ought to have compulsory cycle parking lessons. 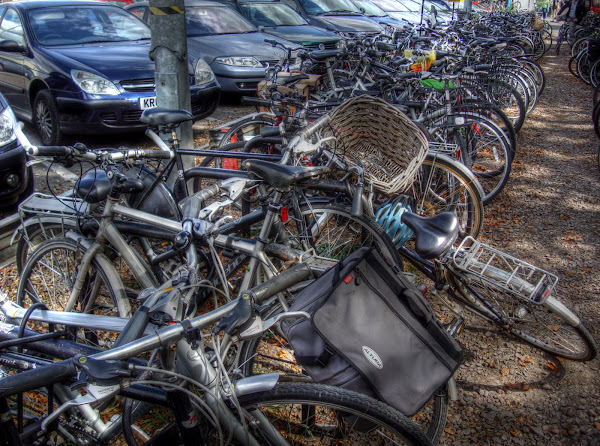 Imagine the uproar if car spaces in car parks required us to scrape our cars up and down the sides of other vehicles. With the advice to bring an old car for parking. 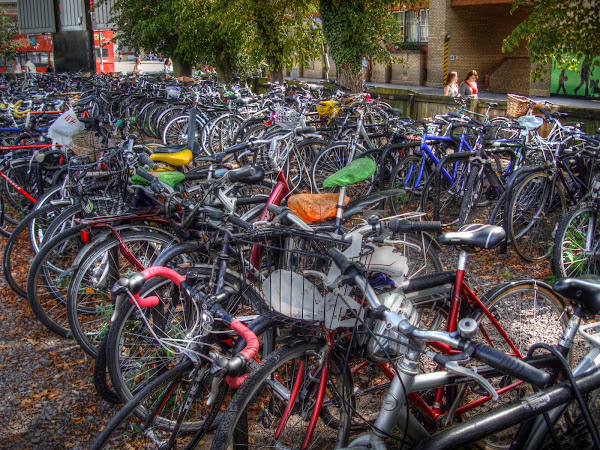 This is the route that the CGB bus takes to get onto the Southern Section – not finished – you can also see how there are quite a few bikes parked on the roundabout and even on the 15mph speed limit sign. At least it is being used by cyclists – (well one at least.) 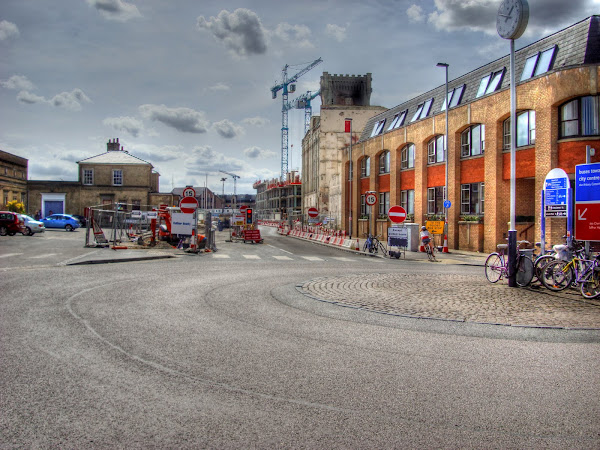 As I waited for my train – there was time to take a picture of the extent of the new middle platform. It is making progress – but that progress seems a bit slow to me. 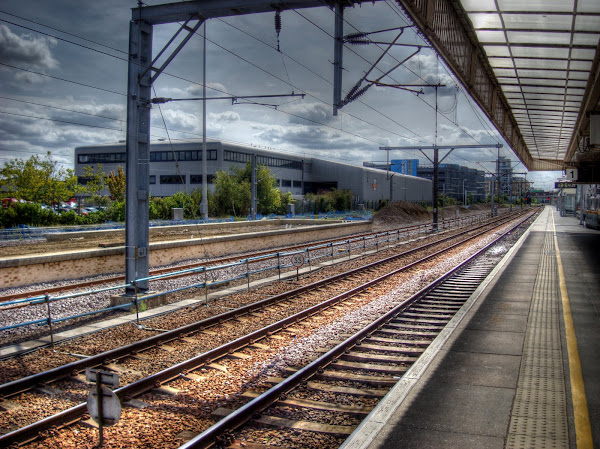 The new platform looking north. Although the station looks empty there were quite a few people waiting for the London train. 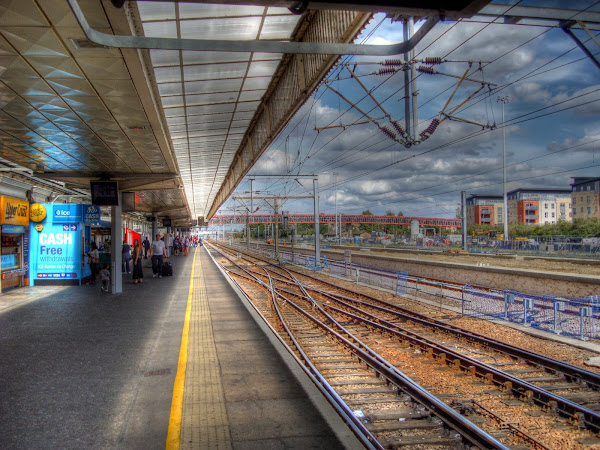 I had to go to Paddington and was interested in the double-decker bike stands. Not for long though – they are due to be removed on the 19th of August according to the signs. 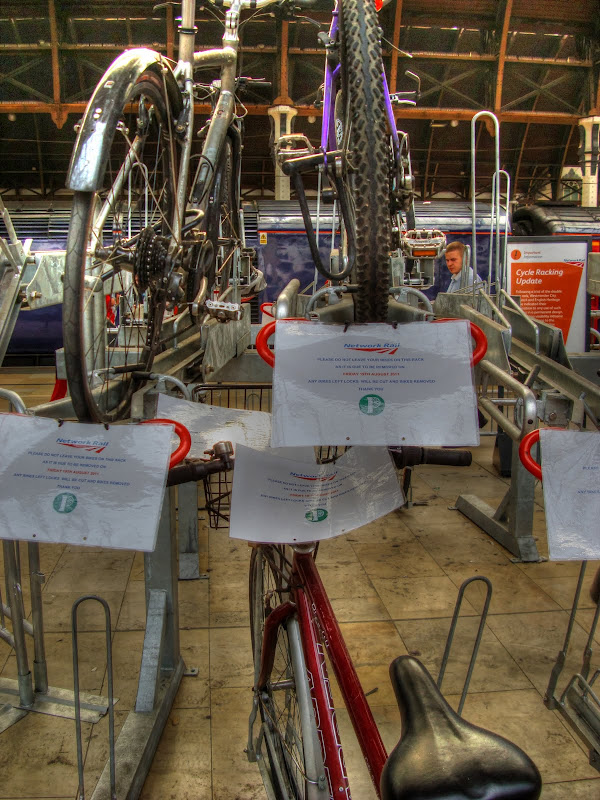 I have not paid any attention to the cycle parking at Paddington, but there is some inside the station area. The last time I was here wit a bike was when I was cycling over from King’s Cross to catch a train to Penzance. I got slightly lost following the cycle route signs, so switched to following the road signs instead, not so pleasant but it got me there. 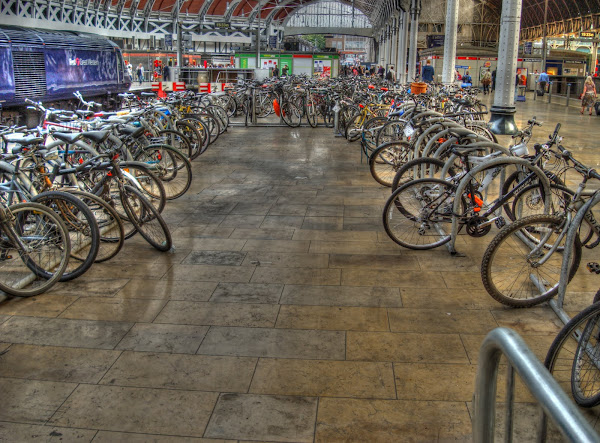 Look at that – cycle parking with a roof – whatever next. 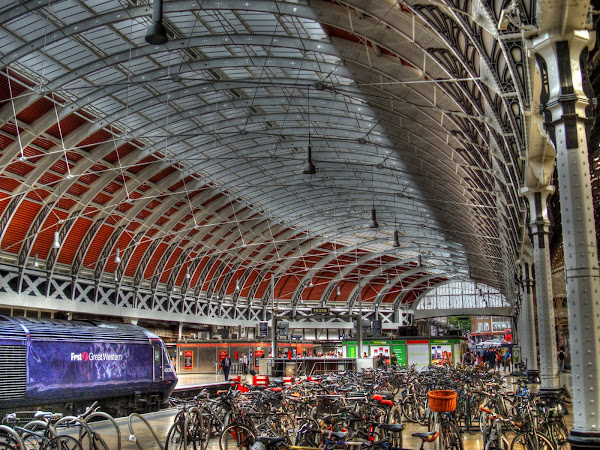 I planned to catch the 7.15om train from Kings Cross and got to the station with 20minutes to spare. We weren’t allowed past the barriers though until some other slow Cambridge train pulled out, in case we got on a peak train. One of my fellow passengers asked whether they really meant to treat us all as potential criminals. Don’t you just love bureaucracy and its petty rules and regulations.

When I got back to Cambridge my bike was still there – but it had been dragged into the path by the plonker whose bike was next door to it. Just remember if it was you, I have a picture of your bicycle!