Wednesday, 17th August: It seems to me that part of modern life seems to focus on constant change. In part that change stimulates progress and business and perhaps less positively waste.  Indeed there are some things we buy that are never the final product. In particular I consider computers as unfinished. Every month or so my computer receives updates form Microsoft, along with regular updates from Google (mainly Chrome) and then less regular updates from what seems like a host of other companies.

It doesn’t just stop at computers, phones get updates software although until Apple and Android perhaps it was only geeks like me that worried about upgrading them.  For a long time digital TV receivers have been able to get updates “over the air” and more recently via broadband connections, even cars can get software “upgrades”, perhaps unbeknown to the owner when they go in for a routine service.

Why – well I suppose it is because in the “non-legal” sense the product doesn’t do what it is supposed to do. I am sure that there are legal “weasel words”  that mean that the approach is acceptable, but I guess more importantly we consumers accept it. Perhaps it allows us to get the product sooner, sometimes it is use to fix a hole in security and sometimes we get an improvement in functionality.

I have used a Garmin Edge 605 GPS for some time, since October 2008 actually. I first used it when cycling from Bath to Bristol, not to show me where to go but to track my rides. I have used it to navigate and I have also used it when lost and trying to find my way home. I also use it to explore, or perhaps rather it gives me the freedom to explore. As it happens the screen size is somewhat small and the map detail gets lost when you zoom out to see more on the screen and since I am generally on smaller roads and byways they disappear from view.

The Garmin GPS is a computer controlled piece of kit, as are many products nowadays and my GPS has been through a fair number of software updates. I’ve lost track of them but, most of them were steps forward and  the Garmin support page shows 12 iterations from 2.0 to the current version 3.3. (A useful resource is this one which summarises much of the advice on the web regarding the use of the Garmin EDGE 705 – which is a higher specification version of the 605).

Throughout the last few updates to the Edge OS mine has had a problem where it reports that it has run out of memory. It hasn’t, but I think there is some form of memory leak where it loses track of free memory. Even if you delete the history stored on the device it still reports problems to the point that it won’t store new ride data anymore. To fix it you perform a “hard reset” and then re-program it with a small number of settings. Why am I wittering on about it – well that happened as I was wondering where to cycle. So instead of planning an interesting route I ended up fiddling with the GPS.

When route planning I have two approaches one is to consider interesting routes I haven’t taken before – byways and bridleways are the type of thing. My other approach is to pick a place to visit and then just head there and back, preferably trying to take a loop rather than the same way there and back.

Which is what happened as I walked out of the house having reset the GPS and amended the settings I thought – well another month must have gone by since I last visited the Phone Box Gallery at Prickwillow so I’ll head there.  As I headed out along NCN51 in my mind the route then firmed up as out NCN51/Lodes Way/ NCN11 then up to the River Lark and back down either on the north or south bridleway to Prickwillow and then back through Isleham and Fordham.

This is the route I took and here is the Bike Route Toaster Link. It is 87Km / 54 miles in length and so needs a bit of time (when you cycle as slowly as I do) but does pass along roads that are in the main pretty quiet. 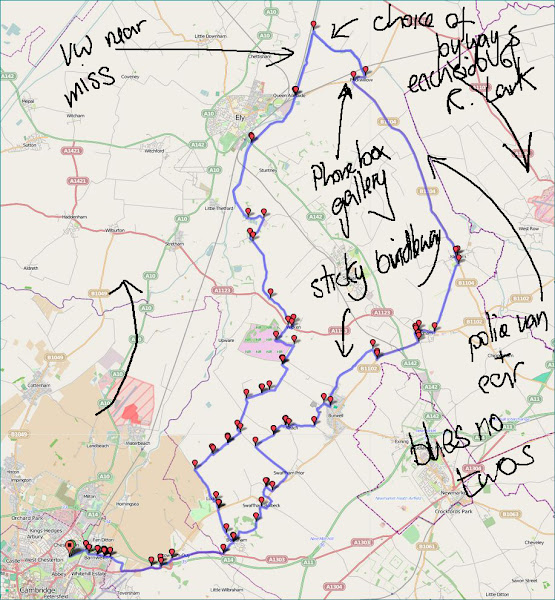 Unless I have the whole day I tend to ration my picture taking, well at first and didn’t stop until after passing through White Fen – not all tractors are red (Massey Ferguson) or green (John Deere).  I saw this after joining Lodes Way (at Lode) and just after White Fen. 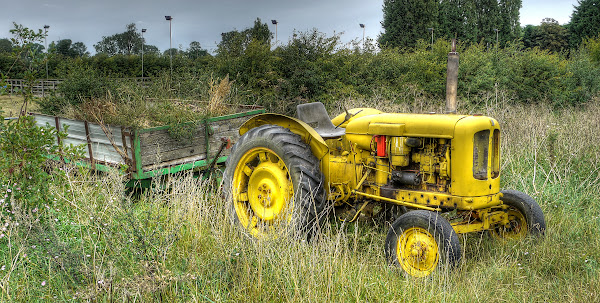 The rationing continued (on picture taking) until just before Barway. This is not a right of way to general motor traffic but is a bridleway. The NCN11 sign looks as if the arrow has been replaced by a stuck-on arrow. There is also a warning to cyclists to be careful as there is some heavy agricultural machinery around these parts (as well as the odd double decker bus). 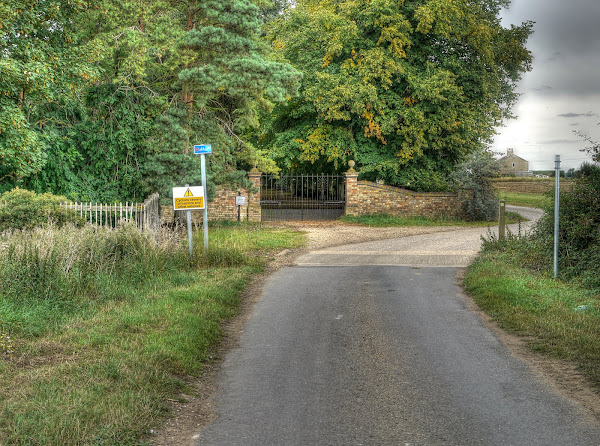 Just onto the concrete and to the right was this burst of colour along the edge of the field.  I would imagine it was planted either as a cover crop or to help wild birds. 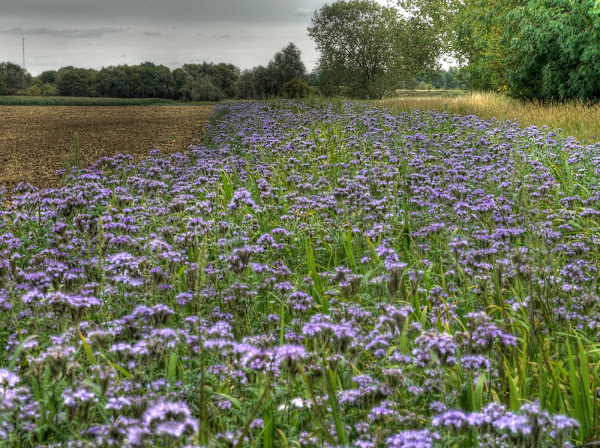 Which brings me onto the question of what is it? I didn’t know at the time which is why I took a close-up of it so that I could identify it from the comfort of my computer chair. My best guess is that it is Lacy Phacelia (Phacelia tanacetifolia) – which is known as a cover crop and provides forage for bees. 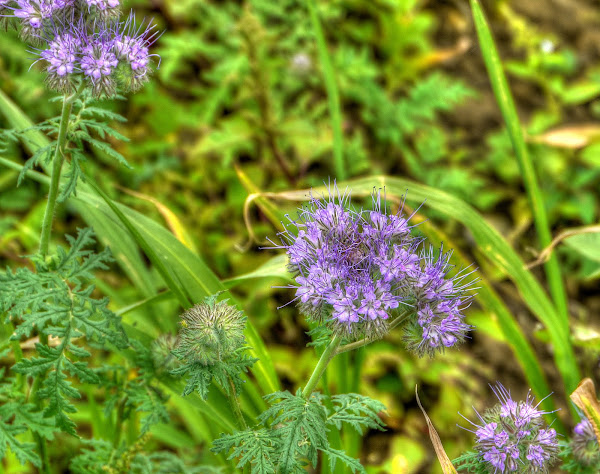 This is a either Broad-leaved or Spear-leaved Willowherb (I think) – the pictures in my Collins Complete Guided to British Wildflowers both seem similar. 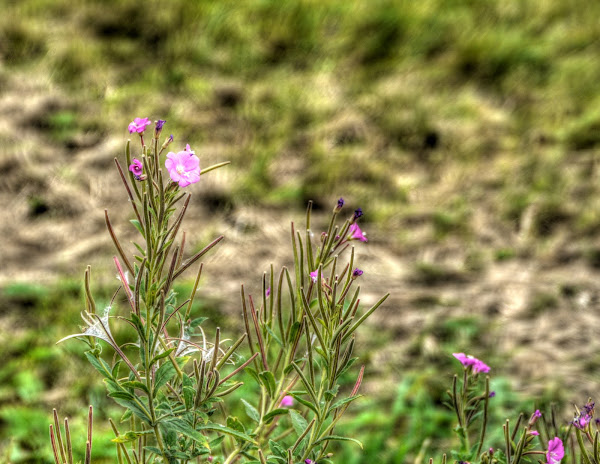 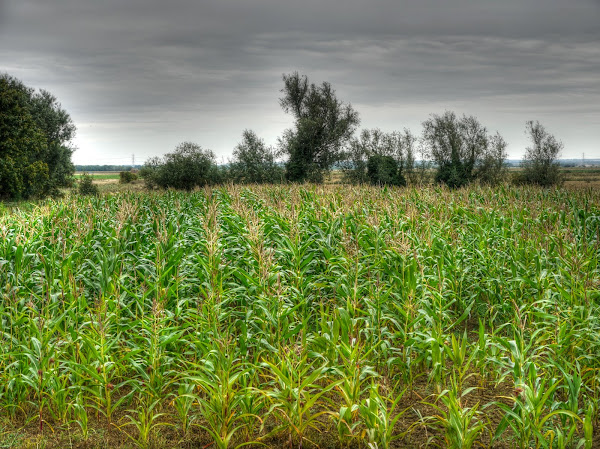 After Barway there is a pleasant mix of decent farm track and tarmac shared us path to Ely. Although we have had some rain irrigation can’t always be left to chance. Ely cathedral is in the background. 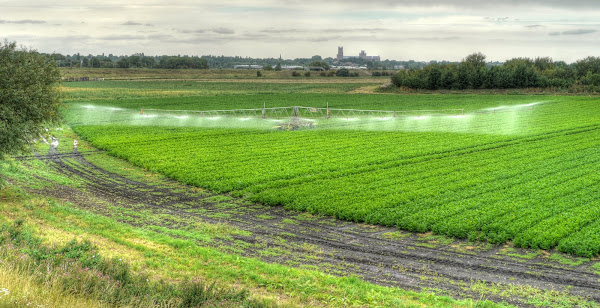 As I cycled along the smell in the air made it seem like I was cycling into a rather oniony salad. It was not that pungent, but quite a fresh smell. It was onions being harvested – but not small salad onions. They seem to have been lifted and then left to dry – there was a machine running along the rows lifting them. 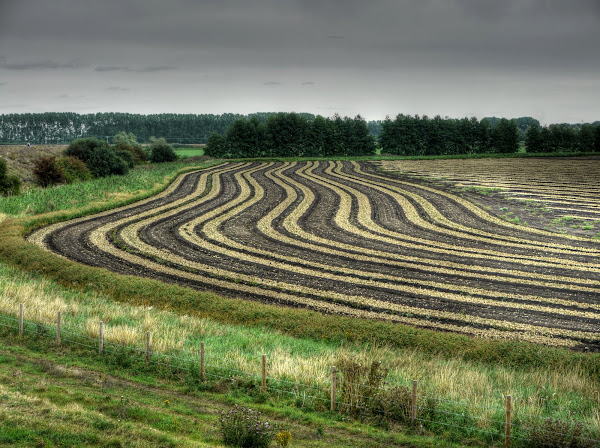 After the off-road section I headed towards Queen Adelaide and then up Branch Bank – a straight road running alongside the River great Ouse. Generally I don’t find this road too bad, is is fast and straight but pretty much all of the time motorists obey Highway Code Rule 163. Except for a VW Jetta that looked as it if had seen better days and shot past my with around 15cm/12” to spare. It ain’t clever.

Then the next choice was whether to cycle along the North or the South bank of the River Lark to Prickwillow. I took the north path because the last time along this way I had taken the southern path.  It starts off as a bridleway soon turns into a road (sooner for the north than the south). There was a Pillbox just before Folly Drove.  You can see the hay bales in the background (and the pylons). 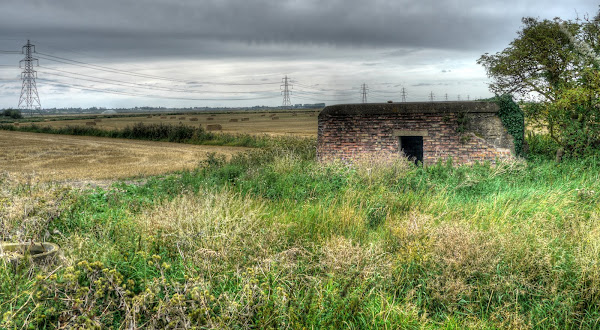 A line of trees marks Folly Drove- not a right of way – but the road to Folly Farm. 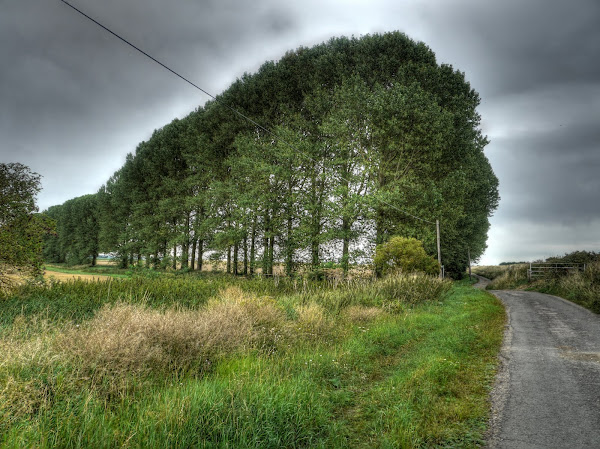 The view down Folly Drove towards Folly farm. 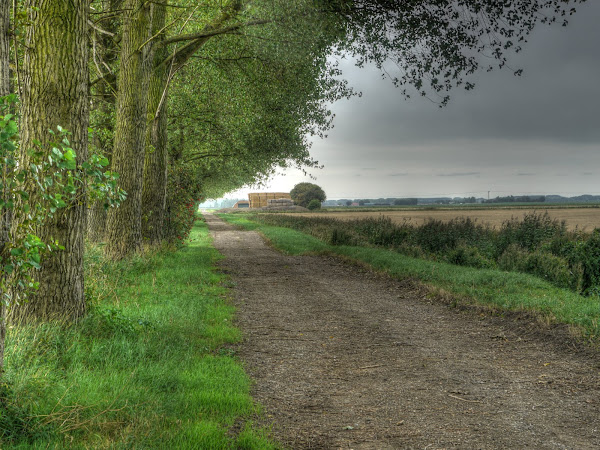 After reaching Prickwillow the Phone Box Gallery is not far down the road (on the left) – there was a new exhibit – the reason for visiting. The artist (Marine) was born in France in ‘74 and is both a software designer and artist.  Her website is www.miss-embe.com and she write on her blog about the exhibition. 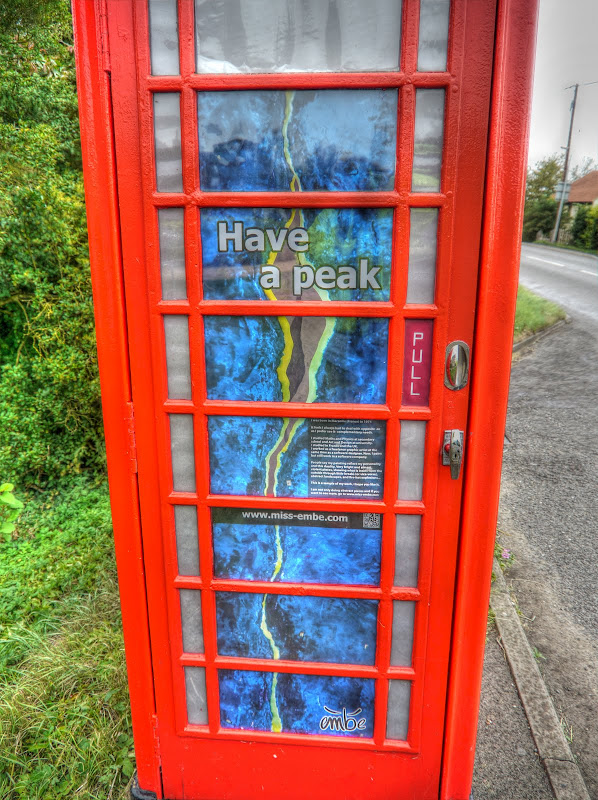 I took a peak and this is what I saw. 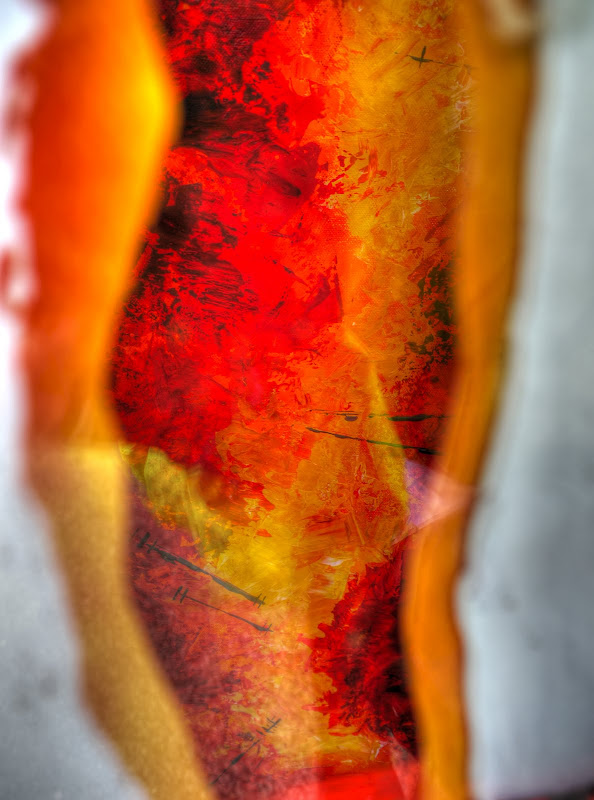 On my way back on the road to Isleham I was overtaken by a Police van and Police car with “blues” but no “twos” going at a fair lick. (Flashing lights but no sirens). They fully understood the importance of highway code rule 163 and  despite their high speed, or perhaps because of their high speed) gave me lots of room and seemed to be well in control of their vehicles. Unlike the VW Jetta earlier.

As it was quite a long ride my photography then took a back seat. Mainly because it started raining before halfway into the ride (at around the 35Km mark.)  It also meant that on the way back the two bridleways I took (into Burwell and along Black Drove Way near reach I had some sticky and slippery moments.  In fact on the way into Burwell it was touch and go whether I could remain upright – I did but I was more respectful of the slipper surface after that.