Sunday 9th October: With October here there are only a few weeks left before the clocks change. It will get lighter in the mornings, but it will also get darker in the evenings.  The weather hasn’t really gotten too bad though, Sunday was not a sunny day, but it wasn’t cold there was a bit of wind around though. This was a problem for two reasons, the first was that given my choice of ride the wind would be against me on the way back. The second problem is that with HDR pictures the branches blow around quite a lot which causes odd grey patches around them in the pictures. I know I could just take ordinary pictures, but…

I wasn’t really looking for a speedy ride on Sunday so when I got out to the Lodes Way I took a couple of detours, one around Reach and the second through Burwell before returning on the Lodes Way after circling Wicken Fen. here is the Bike Route Toaster Link to the map shown below. It is a little over 50Km/31 miles and although it is flat the off-road bits can either be quite tiring or require a bit of concentration. 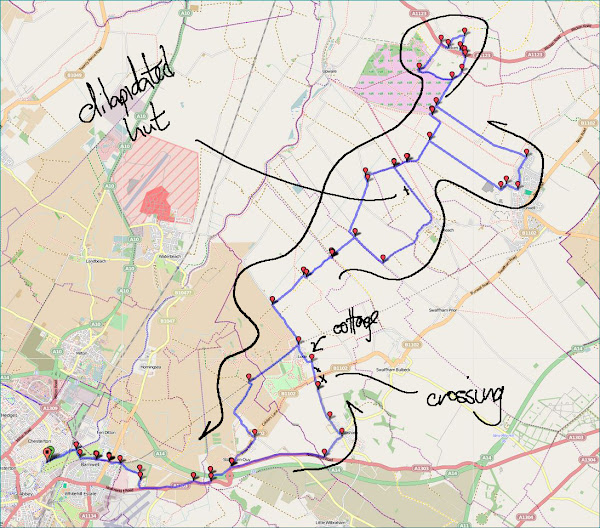 The Lodes Way is a cycle route between Bottisham And Wicken Fen and basically connects the NT properties of Anglesey Abbey and Wicken Fen. You can hire bikes at Wicken Fen so for NT members there is a good day out – pop over to Wicken Fen hire a bicycle and then cycle over to the Abbey have a look around and lunch and then cycle back and have tea and a look around. The cycling would be about 16 miles, for choice it would probably be nicer to hire a bike at Anglesey Abbey – but I am not sure that they hire bikes there, although food-wise the WF to AA route would be better. You do get reduced admission prices for arriving on bicycle, foot or public transport though (down at the bottom of the page).

I vaguely remember their pricing policy, but perhaps more could be made of it to help cut the number of cars driving in.

This is the crossroads where the Lodes Way crosses into the village of Lode. The path is shared-use and is not brilliant, but for a Sunday afternoon cycle ride was relaxed if a little bumpy.  The route has a light-controlled crossing with a helpful little sign to show the cyclist where to go. 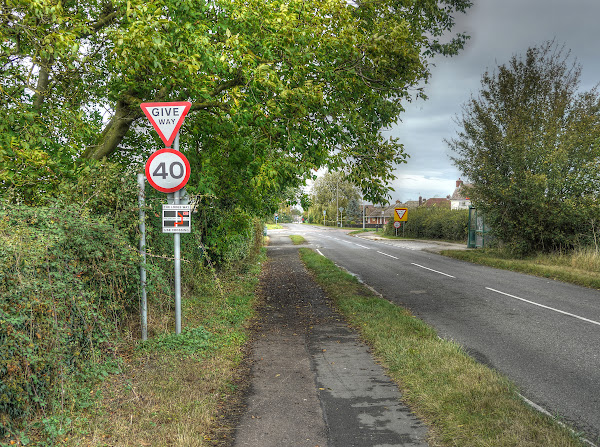 A while back this cottage in Lode was hit by an errant car driver early one morning (3.20am, 30th May 2011). As you can see, four months later and the repairs are still under way. 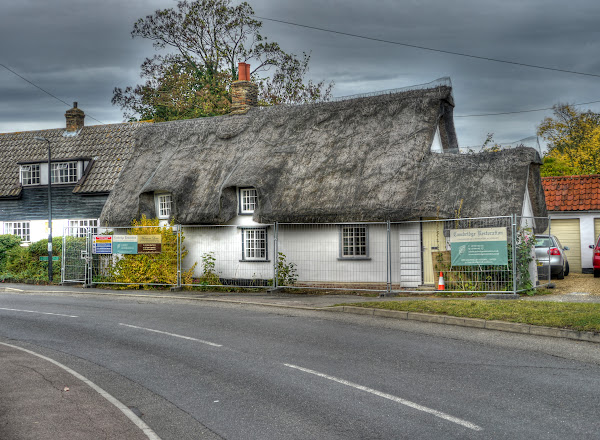 After passing through Lode and heading out along White Fen Drove I noticed this dog running along edge of the ploughed field. 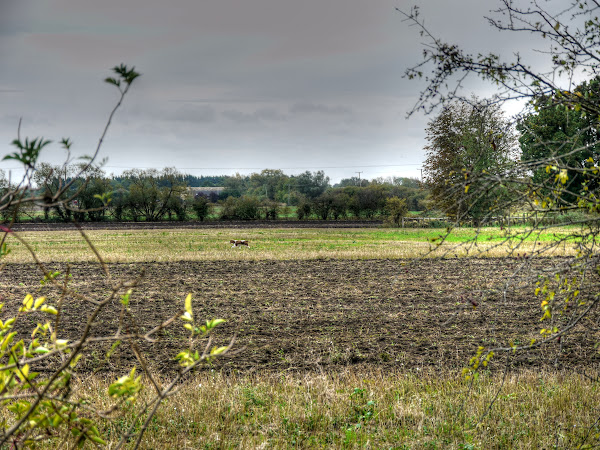 Followed by this tractor doing the ploughing. That is one way to walk the dog. 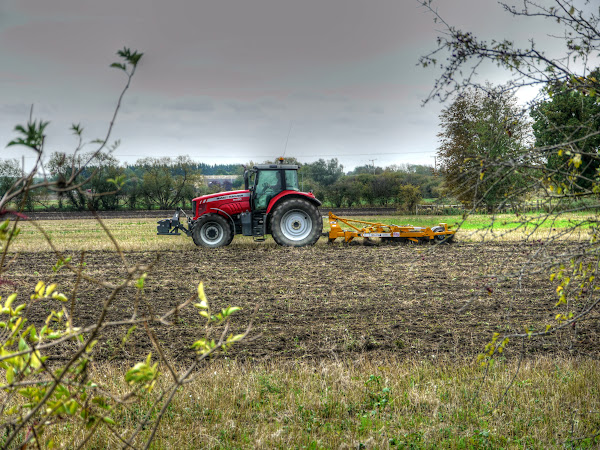 If you followed the earlier link about it not being a Sunny Sunday you will have seen that the day was virtually sunshine-less. There was a lot of grey cloud about. 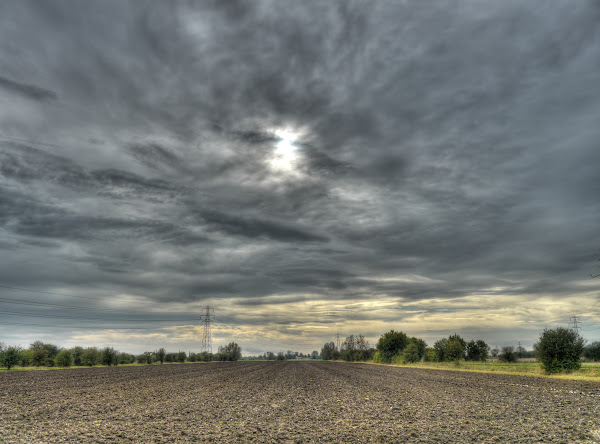 Although occasionally in the distance there seemed almost to be the promise of blue skies.  After crossing Swaffham Bulbeck Lode you can see that at least parts of this field must have been getting warm enough to germinate the seeds. 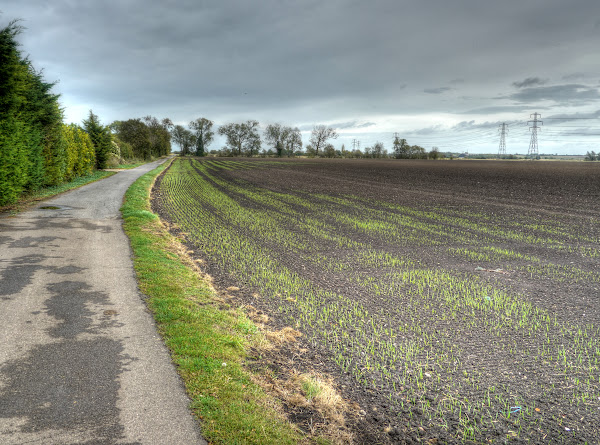 For a change I headed down towards Swaffham Prior and then over to Reach on the Black Drove Way bridleway.  This bridleway must get quite a lot of use as various paths seem to develop.  In the wet dips do develop and every now and then it seems to get flattened.  On Sunday it was flat but quite hard work as the soil was quite loss and my rear tyre kept digging in. If you look to the bottom left of the picture you can see how my tyre track veers off. At this point I stopped, took a picture and walked to some firmer ground. 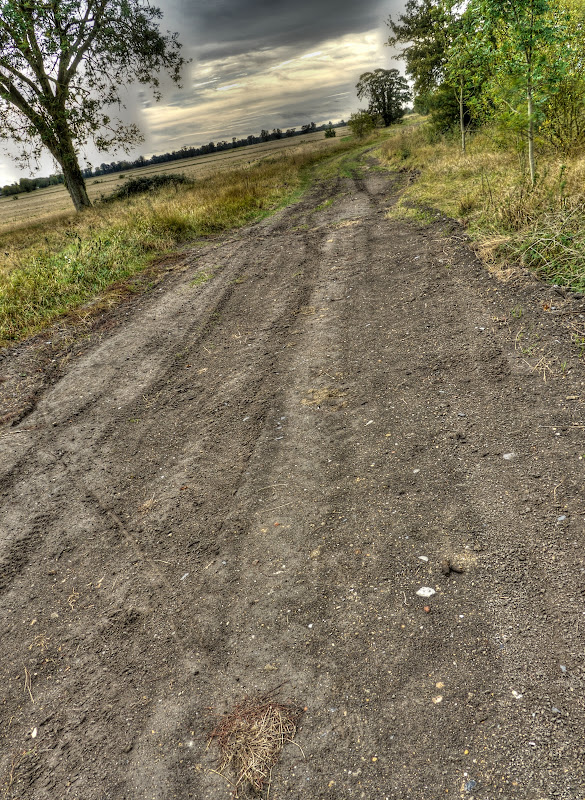 I managed to cycle along it without dabbing my feet. Ruts have developed, but the verges have been cut back and you can also cycle in the middle as well.

On the way up towards The Lodes Way there was this dilapidated shed at the side of a field – it seems to be getting more and more battered each time I pass this way. 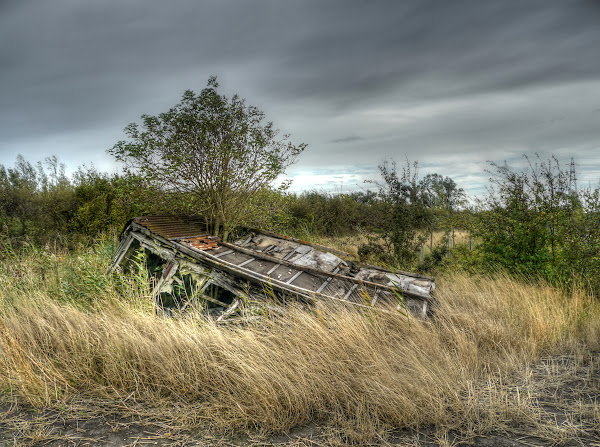 I grew up in Somerset was muck-spreading was a compulsory activity for farmers. (They have a lot of cows and so they generate a lot of “muck”. As I stood taking the last picture – that familiar smell immediately transported me to my youth. It is amazing how smells can have such a powerful effect on the memory. this is the field that had been spread – difficult to see in the picture – but easy to smell in person. 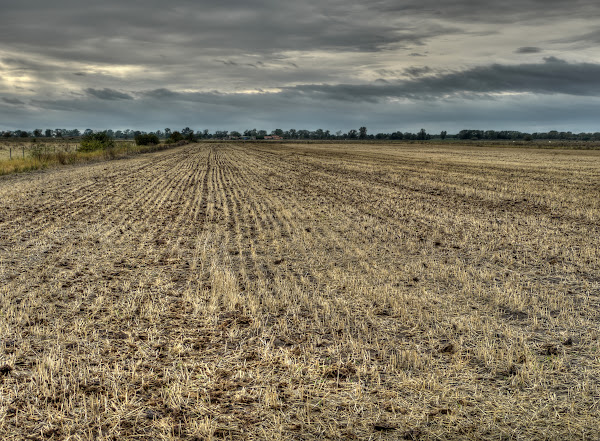 Looking back the way I came there seemed to be another brief gap in the clouds allowing a bit of sun for what looks like the people in Cambridge. 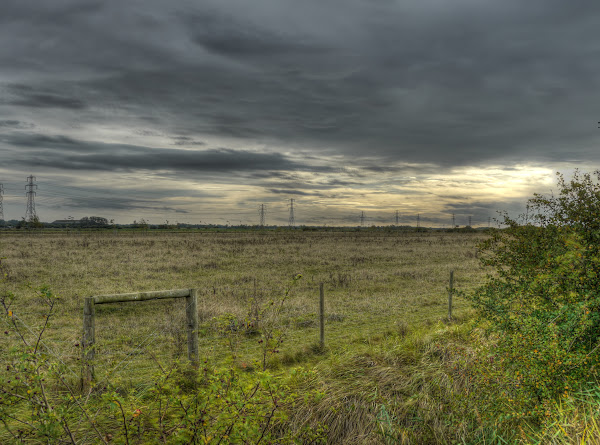 After re-joining the Lodes Way as I was passing Newnham Drove I thought I would head down there – it has been a while since I last cycled the bump drove. 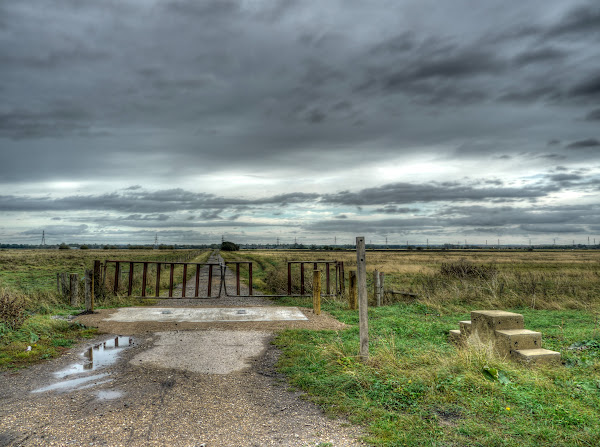 This is the air-lock to keep the people from wandering of the beaten path (at the intersection of Newnham drove and The Lodes Way) but it still allows the cows and deer? through. 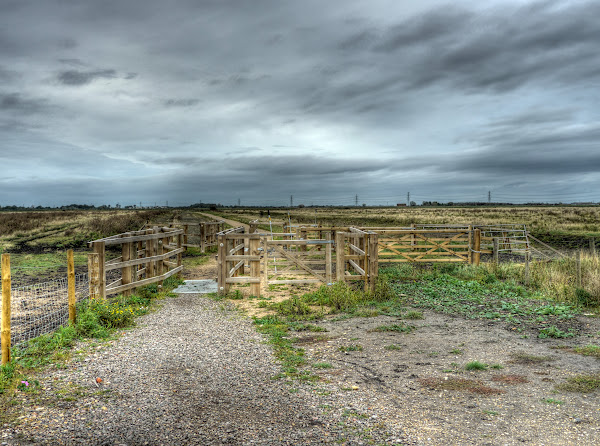 Bits of Newnham Drove are pretty beaten up.  A digger did some work at this point and it looked as if a passing lay-by was being built.  Now I am not so sure, it almost looks as if the concrete has been dumped alongside. 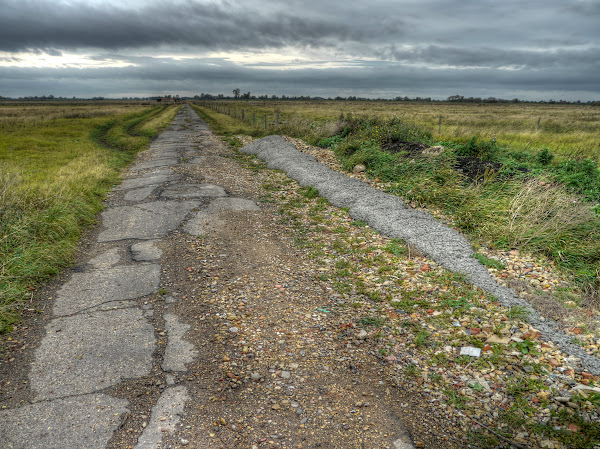 Some labelled rubbish fly-tipped along the side of Newnham Drove, near the Burwell end. 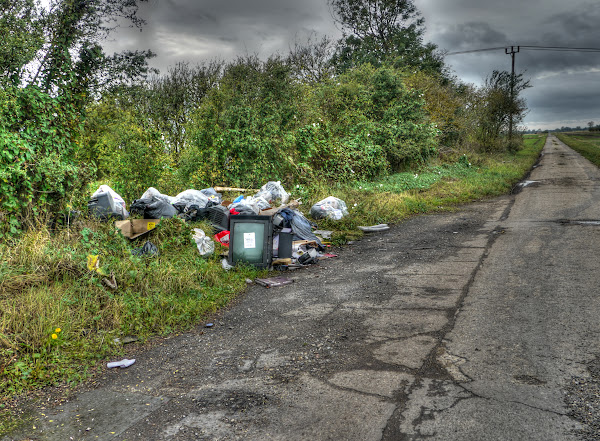 I then cycled through Burwell up and around Wicken Fen and then back along Lodes Way (should it be The Lodes Way or Lodes Way – I’ve given up with too many “the”s).

Most of Lodes Way is pretty good with decent paths, this bit near the footbridge over Burwell Lode is not so good. As you can see it is a narrow mud path and likely to get muddier in wet weather.

There is a ramp to assist cyclists in getting their bikes over – the trouble is that is is a bit close to the fence for my wide handlebars and steep – even with both brakes on my bike skids down it. 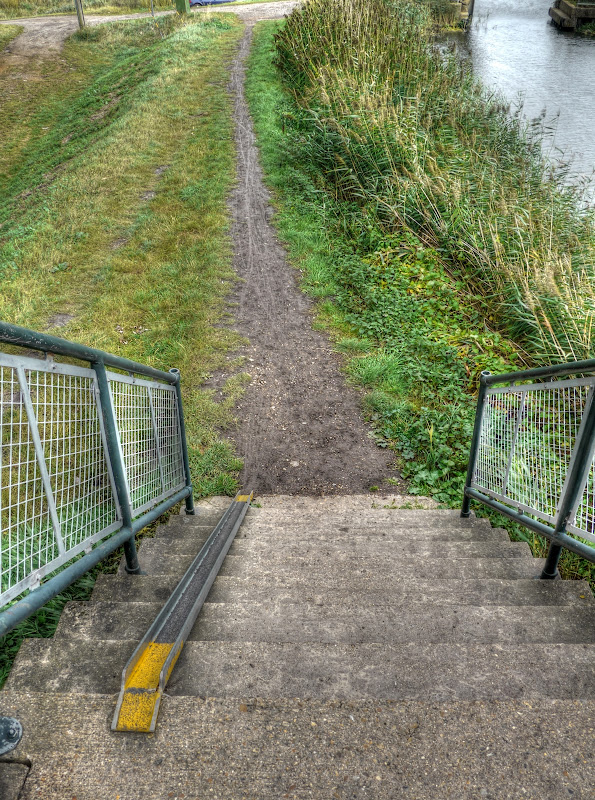 One of the challenges of constructing bridges over the Lodes is that the banks are not solid in the case of this bridge it would seem that the steps have moved and the safety fencing has been loosened. The orange netting is there to warn you rather than save you I think – the metal fence is now pretty wobbly.. 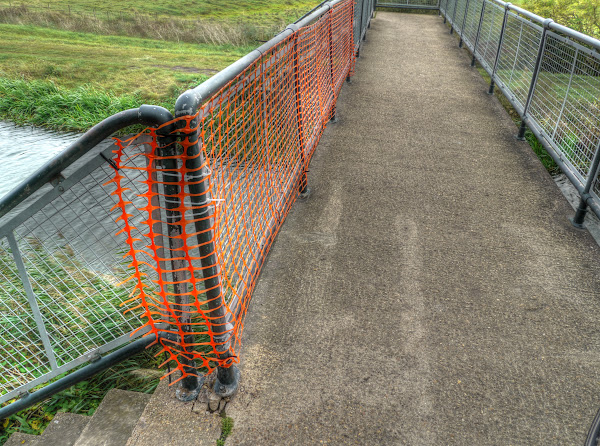 After that it was a “swift” ride back stopping only to take a picture of some more fly-tipped rubbish along the side of Headlake Drove (with the cracked edges). But I took this before deciding to take more pictures of the cracked edges – it makes sense if you read my posts about reporting road problems. 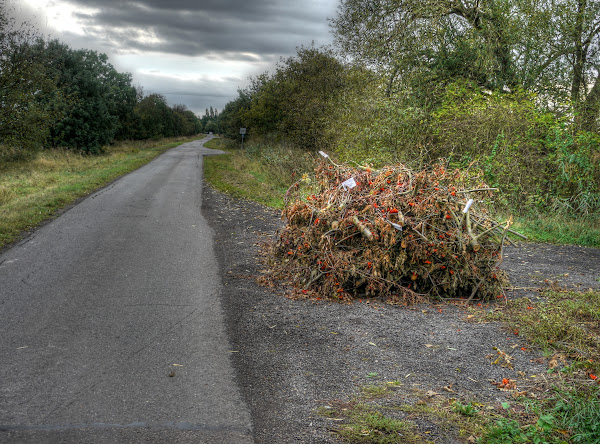 As you can see the rubbish has been logged and labelled and will shortly be removed- perhaps they ought to give the people who do this some tar and a roller so they could make a few impromptu road repairs as well.