Monday, 1st October 2012: I’ve mentioned that I would be going away for a  a late Summer holiday, ore perhaps it should be called an Autumn holiday. It would not involve any cycling though – which I used as an excuse to nip out for a cheeky ride whenever I could.

This ride was a loop out along Lodes Way a detour through Upware to Wicken Fen and then and back via NCN51 from Burwell. The loop bit was a shade under 40Km/25 miles.  The main attraction was that it avoided too many impediments such as bridge I had to carry my bike over (Burwell Lode bridge) or very rough road surfaces (Newnham Drove). The country roads are also undulating which tends to keep the traffic from speeding and there are a few tractor movements which on a single track road also tends to keep the rest of the traffic honest.

I did take my camera – but I wasn’t planning on taking many pictures I didn’t think that much would have changed since the last time I cycled around the area. That was until I swung into Bottisham ready to cycle along to Lode. There had been a bit of a flood. As I got closer I realised it was a flood still in action. 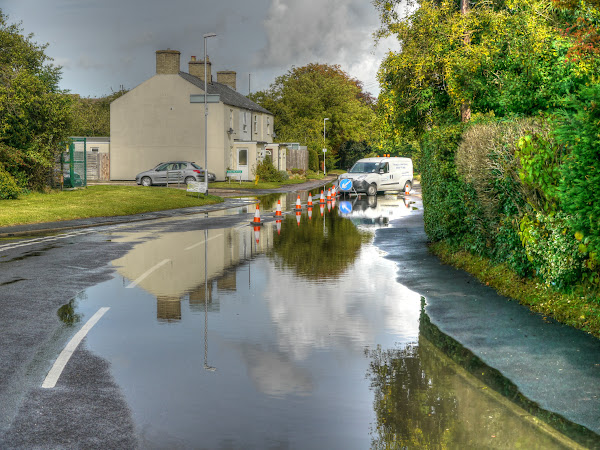 The footpath was still passable, however the road was pretty wet with the flooding stretching across it. 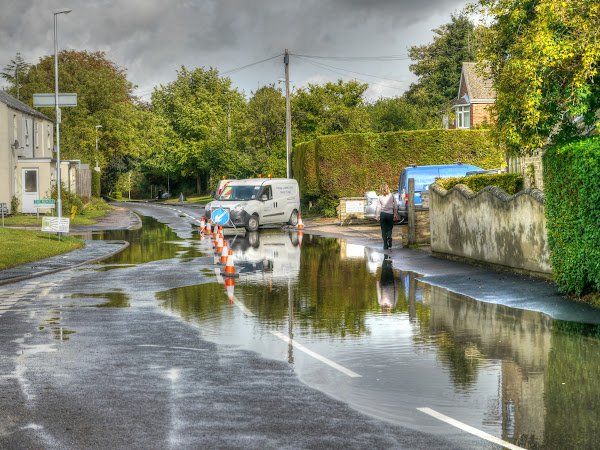 It also appears that Anglian Water are trying out a new method of leak mitigation. Rather than all that tedious digging just drive you car over the hole and block the leak with your tyre. Although it didn’t really seem to be slowing down the leak that much. Alternatively he might have been just giving his van a wash from underneath. 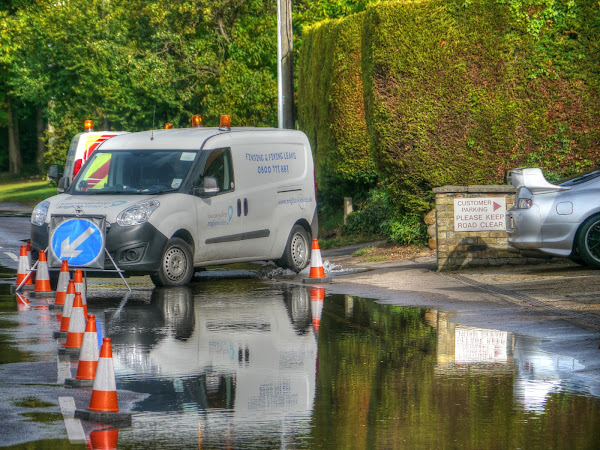 As I set off it seemed that the leak was right in the middle of the great Bottisham Divide as the water was flooding in both directions. The Lode Road just by the school was also flooding.  I waited for a gap in the cars before cycling through. When I learnt to drive it was drummed into me that driving through puddles in the road that splashed pedestrians was a major no-no. From what I have seen that concern about splashing pedestrians is not so strong nowadays. (Another sign that motor traffic has been imbued with some sense of priority and superiority over other roads users.) 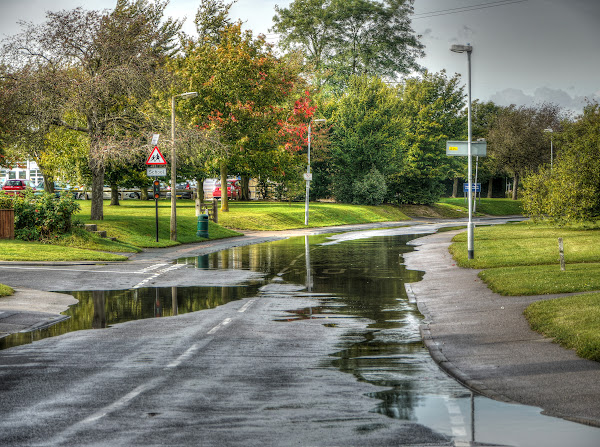 After that excitement I then rode steadily through Lode along Lodes Way before turning up to Upware. I even managed to get through Upware before stopping. I spotted some more Spindle(Euonymus europaeus) in the hedgerow, halfway between Upware and the A1123.  Spindle is like buses you see none, then you see several.  (It was first pointed out to me by the Swaffham Bulbeck Cyclist and I have now seen it in several different locations in the county, but it is not as widespread as I might have thought. Or perhaps I am just not very good at spotting it. 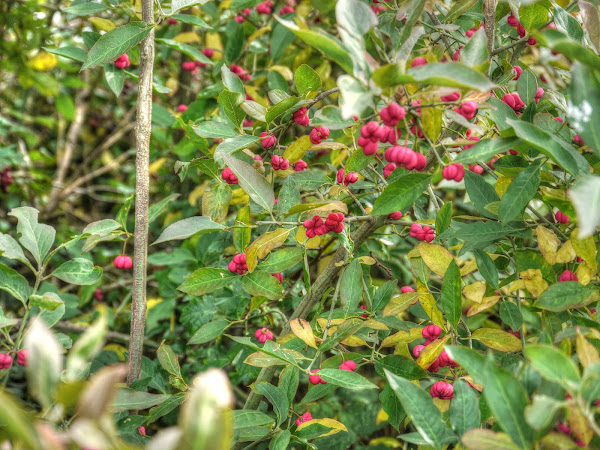 One of the reasons I tend not to see it is that although close-up the berries are obviously very pink when seen amongst the green foliage they somehow look redder. 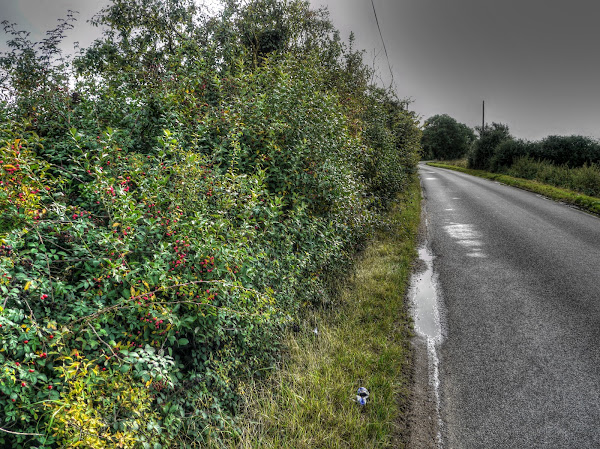 I have not really thought about it but fly-tipping tossers also seem a bit like buses, you see none then you see a bunch. Perhaps fly-tippers are seasonal as well.

Fly-tipping on the roadside near Upware 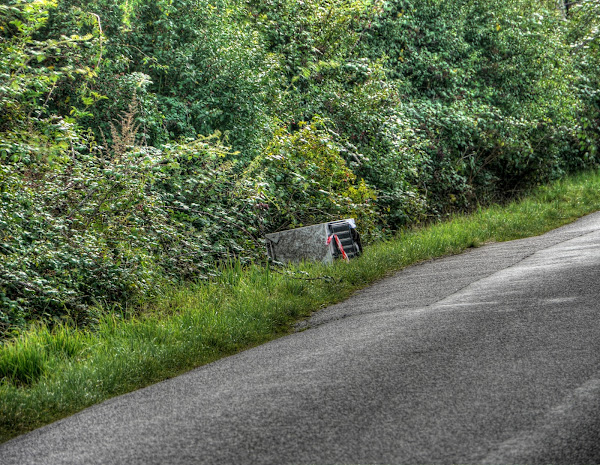 On my way through Wicken Fen I must have had a reason for taking this picture, but I am not quite sure what it was. I have already mentioned the addition of reflectors – perhaps the blue Sustrans sign is new? 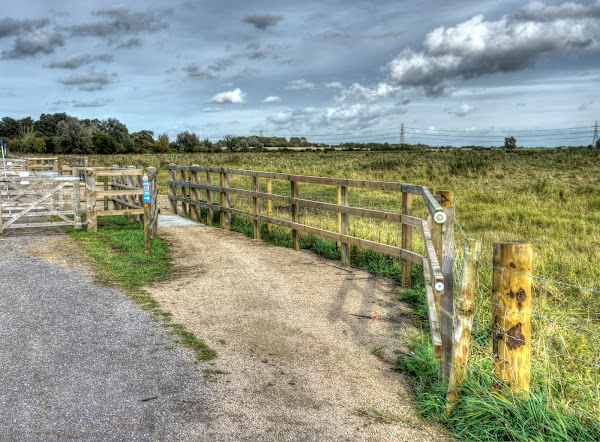 Another sign of the autumn is the way beet clamps pop up. Apparently the logistics for getting the sugar beet delivered to the factory are quite complex. The farmer has got to be ready for his/her delivery slot so that the factory can be continuously supplied. But a frost will reduce the quality of the beet (and so the price it can be sold at) so the farmer will want to protect it.  The other challenge is that depending upon where the field is it might be inaccessible by lorry. 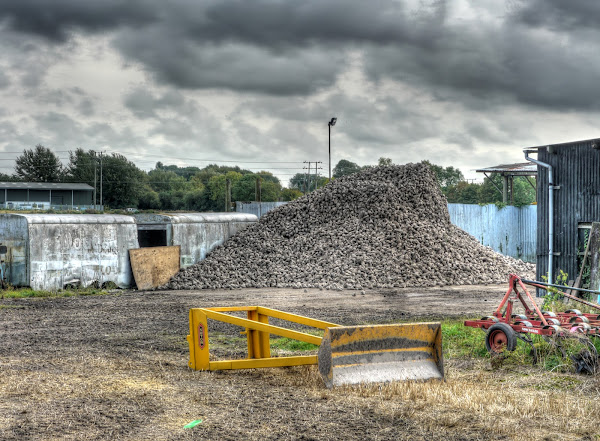 Cambridge University has recently (2009) celebrated its 800th anniversary, well it turns out that Reach Fair beat it by a few years. 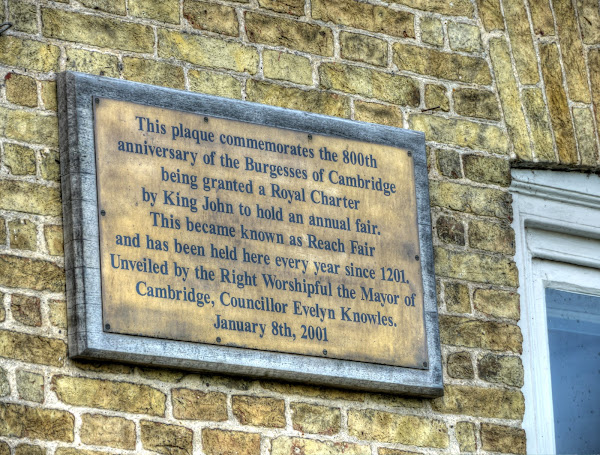 As I cycled back, somewhere between Swaffham Bulbeck and Lode I passed the field where last time the farmer had been harvesting the grain – the bottom five pictures. Now it was being drilled. 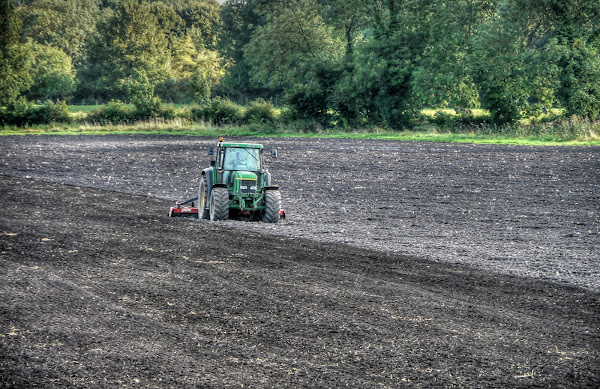 Not long before my hols – must think about what I need to take and organise the getting there and back travel. We are going to Scotland and could drive, fly or take the train. There have been flooding and major road and rail closures though ( a 30-mile stretch of the A1 in North Yorkshire)  – so which way? Bottisham didn’t get the flooding so bad after all.