What is the ideal commuting distance?

Tuesday, 25th September 2012: I know I go one about working from home and how it frees up guilt-free time for cycling.  What I really mean is that it frees up time for a varied diet of cycling. One thing that commuting is quite good for, if you have a manageable distance to cycling is proving the impetus for five days a week cycling. Now that manageable distance varies for all cyclists and varies through the seasons and with fitness levels.

At one stage I used to cycle a round trip of 30miles, once I was in the swing it was great. Given the congestion here in Cambridge it was sometimes a delight to cycle on past and not be sitting stewing in my own exhaust gases.  The trouble is it didn’t take that much to stop me from cycling my daily ride and then it was quite hard to get cycling again.  The sorts of things that were worst were suffering from a minor lurgy that was not bad enough to spend the day at home, but bad enough to knock the stuffing out of me if I tried to cycle.

For me the sort of distance that is a no-brainer to ride is a round trip of 14 miles. It is enough to get some exercise and yet if I am in a suit short enough that if I take it easy then I don’t spend forever cycling and yet don’t get hot and sweaty. Anything less then it is no contest the bike wins every time – even when the weather is grotty.

One of the trips I have to make is to London, a few times a month. Apart from the fact that cycle parking there is crap it is an ideal cycle ride. There are a multiplicity of routes that I can use to extend my ride and avoid too much traffic from where I live. So I don’t get bored of the same routes and I feel energised by the ride and I don’t feel knackered by the ride.

Today was such a day, I had a mid-day meeting in London which meant I could leave my bicycle at Station Cycles and thus leave stuff with it and avoid the hassle of finding a place to park. Whilst I have been pretty lucky finding spaces to park my bike it can take more time than I would like. On top of that the queue for tickets can also be quite long. (in case you are wondering the opening hours of Station Cycles mean that I can’t leave my bike if I am on the early or late trains.

Normally when I cycle to the station I carry my small camera on a strap over my shoulder so that I can take pictures as the fancy takes me.  For some strange reason I didn’t on either the ride and from the station. So I only took one picture – of the Carter Bridge from the new platform to new platform bridge. 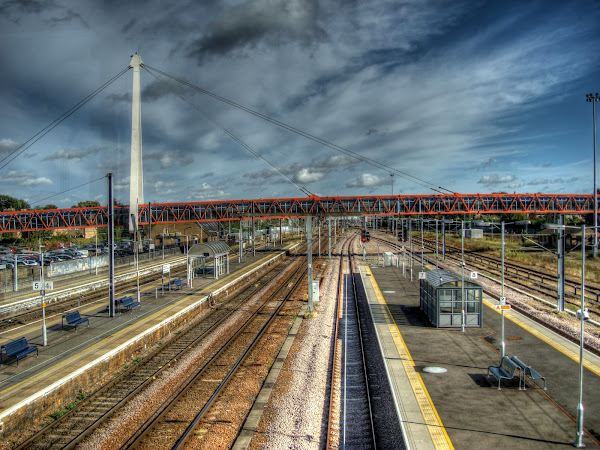 So for me the ride to the station is an ideal cycling distance – it is reliable in terms of time, far more so than if I drive. I can choose a variety of different routes  This time around I cycled each side of Cambridge Airport. There are a bunch of reasons why it is better than driving – reliable, parking, cost and more scenic to name a few.  I guess despite the evidence of this ride I also take more pictures when cycling than when driving.