What is the problem?

Wednesday, 26th September 2012: Meetings in London are a bit like buses for me. There are none for a while and then several seem to come along together. As I mentioned the other day I try not to take the same route to the station each time – just for the change of scenery.

There has been a bit of a debate about Gilbert Road in Cambridge recently (Gilbert Road revisited & Gilbert Road Revisited – two different Bloggers). Which got me thinking and via the comments led to this blogger Bikemapper and his post A Strategic Cycle network which is further explained here.

It seems to me the first issue is do we agree on what we are trying to achieve? (and who is we).  Personally I feel that Gilbert Road has become a more agreeable road to cycle along for me. However much as I might wish it cycle campaigning is not and should not be about what makes routes more agreeable for me – although it might be about the same goals if there were enough “me”s.

In working out what we are trying to achieve then another way of considering is what problem(s) are we trying to fix? Well it seems to me that we have two factors to consider, the first is that the UK is under pressure to urbanise.  There are various factors that influence this including; an increasing population (52.4M 1960, 62.6M 2011) – more houses, cars, roads, increasing consolidation of services such as shops, hospitals, places of work – increasing daily distance we need to cover as individuals with the most growth being an increase in car and van travel. See Table 12.1 – Passenger transport: by mode (it downloads a PDF).

There are caveats, but the picture is pretty clear, cars and vans account for most of the increase.  The trouble is that the motor vehicles need roads, fuel, they are noisy and pollute and are dangerous for vulnerable road users. I reckon that far from making life easier they have become a blight for many people.  (Note – my selection criteria for data is rather loose although official stats tend to win over other data.)

There are also  costs associated with these factors, whether it be health costs from pollution and obesity to UK economic problems because increasingly fuel is imported and so we are dependent upon external and diminishing external supplies for our energy.  Importing fuel to burn needlessly is basically like burning money. Of course all this driving around is good for the economy – right – well that is what some might say. However look at the Japanese, masters of whizzing people around willy-nilly – their economy is stagnant and has been for a while. ( A somewhat sensationalist piece from the DM which suggests the population of Britain will reach nearly 80million by 2050.)

So what problems are we trying to solve, well “quality of life” and the “economy” I reckon, we just don’t get it yet. Capitalism will work its effects ultimately – already energy costs are rising, if we don’t do anything petrol will get so expensive that it will limit everything from commuting to agriculture. We are already seeing rises in domestic energy costs. The trouble is country economies are a bit like super-tankers they taker a long time to turn and so long-term strategic planning is required. We need to start doing things differently now. Clearly the drive on sustainable energy sources is part of that change.

The Department of Energy & Climate Change monitors energy usage statistics and their data suggests that the household expenditure on energy (Solid fuels, gas, electricity, vehicle fuels etc) has increased by 50.9% from 2000 to 2011. That’s market forces for you – so we either get poorer or more effective in our use of energy.

Some hope that alternative sources of transport energy will be developed such as electric cars, whilst it might help cut imports  I reckon we need to be a bit more radical in our longer-term thinking and planning. On top of this we also have the uncertainties of climate change and an aging population to consider.

So back to cycling – well it would not fix everything, but it could and should be a big part of the change. The trouble is that we just don’t see it yet. We humans don’t really like change (except of the pay rise variety).  So I reckon our heads are in the sand on the role that cars play in society.

Here in Cambridge, with its relatively high level of cycling (for the UK) the car is still king as far as I can see.  Just look at this article on the problems caused by bad parking by parents transporting their kids to and from school. There are loads of schools mentioned, the problem is endemic.  Although I would suspect that the issues are seen as more of the  “my car is being blocked by your car” variety rather than how do we change to transport landscape.

Enough ranting for now – what was it I was saying about car drivers and their expectations. My route to the station took me down Newmarket Road, this is the bit just past Meadowlands Road. I believe that this is a shared-use pavement, although it is not always that clear the Cambridgeshire County Council map shows the pavement bit as a link separate from traffic as well as the additional separate bus and cycle lane.

In case you are wondering about the pros and cons I would normally switch to the bus and cycle lane because this bit of shared use pavement is bumpy and has side roads along it as well as pedestrians.  The bus/cycle lane is ok except the lane traffic lights don’t go green for cyclists at the junction with Ditton Lane.

Many years ago, around 20, we were cycling along here with my son (6 or 7) on the shared-use path and he crashed into the bus shelter a little further along – causing me to do an unplanned dismount as well. Only pride was hurt fortunately, but it highlights the heritage of bad practice in providing provision for cyclists that still hangs over us.

Clearly this driver is far more important than us vulnerable road users – he probably didn’t want to get his tyres dirty either, so chose to block the pavement completely rather than chew up the grass.  This sort of thing is not unusual, it happens all over the place. As a consequence it might cause cyclists to switch over into the cycle/bus lane without looking properly or cycle on the grass, with the risk of skidding and maybe falling. Thanks Mr Motorist.

A Shared-use Pavement along Newmarket Road, Cambridge
being shared by a car! 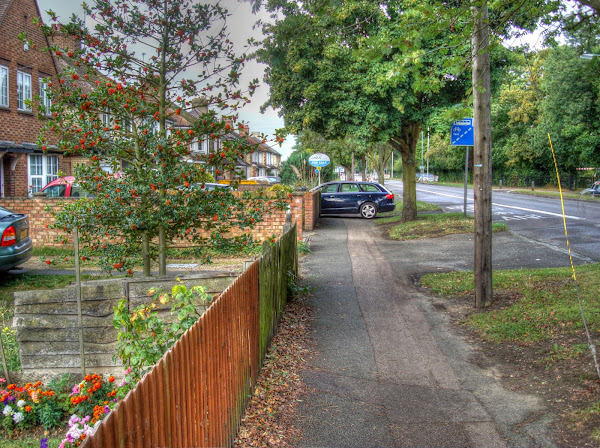 As it happens I was a little late for the train and so had to concentrate on getting to the railway station. I got there in time and got a cycle parking space, but things went well. The train was on time also.  It seems to me that there has been a general improvement in the reliability of trains between Cambridge and King’s Cross, although there was a blip of problems during the Olympics.

My first meeting was in St Pancras – good to see a Brompton being used. Whenever I see one when I am in London I wish I had mine with me.

Brompton being wheeled through St Pancras 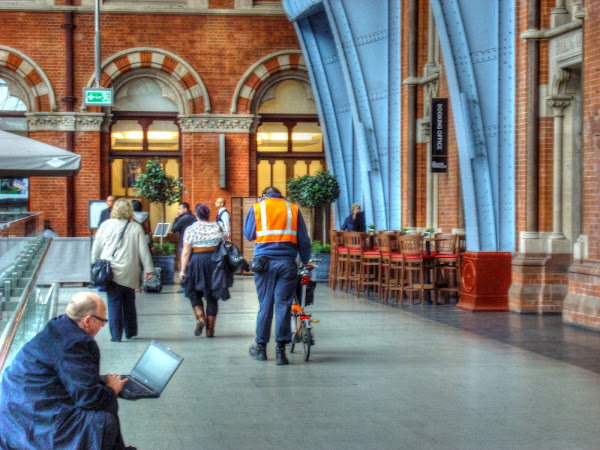 A bit of PDA beneath the Clock – St Pancras 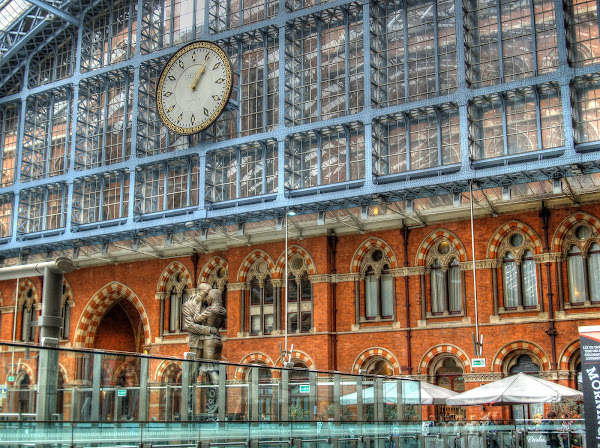 Later on in the day as I was walking to another meeting there was a bit of a kerfuffle in the rain. The chap on his bike in the middle of the junction had dropped something. Now most motorists seem to think that blasting the horn helps already ruffled road users get their act together more quickly – wrong. Cast you mind back to learning to drive, when you stalled as the traffic lights turned green did the irate beeps behind you make it easier to smoothly pull away without stalling again. Of course they bl**dy didn’t and neither did it help this chap on his bike sort out his load and get going. 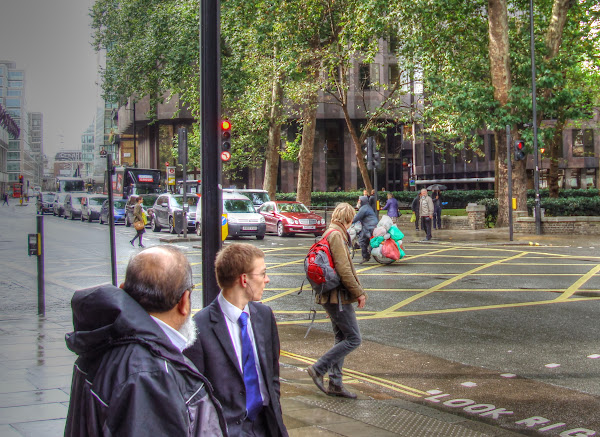 As luck would have it the rain had moved on through Cambridge, when I got back to the station. I found myself cycling through loads of puddles home but didn’t get wet.