Unusually for the UK, well the Flatlands of East Anglia anyway, we have had a holiday weekend where the weather has been pretty good, apart from the actual Bank Holiday Monday that is (thunderstorms predicted). You can't win them all, but no complaints from me. This weather certainly gets people out on their bikes. On my way through the Fens I was stopped by three guys heading back towards Cambridge on their bicycles. The lead guy stopped in the middle of the road (only a country lane) and held his hand up to ensure I got the message. They were probably either University Students or perhaps Language School Students. They had taken the opportunity to go out and explore on a lovely sunny day and were a little unsure how to get back to Cambridge. I pointed them in the right direction and wished them luck. The country lanes are not always that well sign-posted and in this particular case the best route required following the "dominant" road which was not obvious unless you went wrong and turned off it. All the roads round here are pretty bumpy, because as the Fen soil shrinks it warps the road surface.

When giving a presentation most people only remember, at best, three things you tell them. I know when I ask for directions, which is not often - real men don't huh :-), I find that I barely remember anything. So I focus on ensuring they get the next step - in this case I headed them off to Swaffham Prior - from there the signposts get better. There are some very scenic routes into Cambridge - but I got the sense they were tired and wanted some certainty.

As it was such a lovely day I went out in t-shirt, shorts and sandals on my MTB and stuck to as many tracks and by-ways as I could. On my road bikes I have switched to what are reckoned to be the best for puncture-proof cycling without sacrificing too much comfort or speed - Schwalbe Marathon Plus Kevlar HS348 tyres. Although I did get a puncture on my Longstaff the other day - a flint (small piece of stone) had gotten through. Mind you the tyre was reasonably worn. According to my notes - which are not perfect, it had done around 7,500Km/4,600miles, which is pretty good. It was looking worn though and since I hate getting punctures I have replaced it with a new tyre.

I have different tyres on my MTB and as I cycled into White Fen I picked up a puncture - although the tyres are quite knobbly the thickness of the rubber where there aren't any knobbles is not quite so thorn resistant. I have had loads of punctures, fast, slow, overnight and explosive over the years. The explosive one was when a bike rim had been worn very thin by the brakes and the metal shredded, which ripped the inner tube with quite a bang. (I knew it had worn the rim - but I was trying to squeeze a bit more life out of it - I ended up walking 4 miles whilst carrying the front of the bike.) This time it was a medium speed deflation and I decided to cycle on until I reached the picnic tables at the other end of the field. The handling of the bike generally gives the game away as it starts to go wobbly and despite years of puncture experience for some reason I convinced myself it was the rear tyre and stood up on the pedals to balance my weight over the front, which made it worse - yes it was the front tyre going down.

Fortunately my bikes all have quick release wheels and brakes that can be easily opened up and I whipped the wheel off, pulled out the inner tube and looked for the puncture by pumping up the inner tube and listening for the tell-tale "whistle". Then having located that a diligent search to find the corresponding place on the tyre to make sure I don't fix the tube just to get another puncture. In this case it was a thorn which took a bit of removal as it was difficult to grasp. You end up pushing it from the inside and pulling it from the outside. As you can see in the picture I had my rack-pack with various tools including patches so I patched the tube and popped it back in and back on the bike. 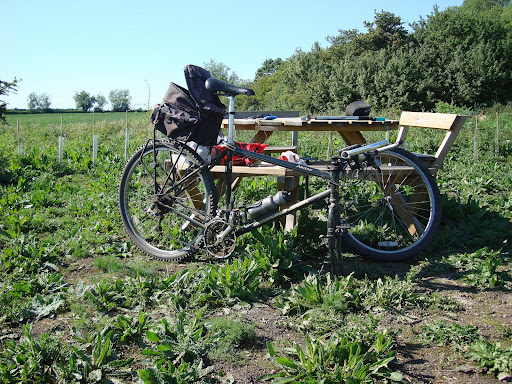 While sitting there I heard a cuckoo calling - not my first of the year - but the closest, each time I heard it I turned on my camera in order to record a sound clip but by the time it powered up and I zoomed in - yes the cuckoo shut up. In the end I left the camera on and powered up and only needed to hit the record button. As the cuckoo seemed to be in some nearby trees I pointed the camera in their direction for good measure - but you cannot see the bird. This time around the sound was loud enough to be heard on the clip. (The last time the cuckoo was too far away and the clip just recorded wind noise - despite trying to process the wind out.)

Instead of riding on the roads there are quite a few tracks alongside the fields used by the farmers and despite it being a sunny day I saw a rainbow - caused by one of the irrigation sprays. As you can see there was barely a cloud in sight. The track had a few puddles though. The stuff growing in the field is turf - grass for gardeners to get that instant lawn look.

On my way back on this same track a farmer in his 4x4 was bumping along the other way, he'd probably been moving the sprays around to ensure even coverage, One thing I have found round here is that the farmers, whether in tractors of 4x4s tend to be extremely courteous, I cycled along one side of the track whilst he drove along the other and cheerily waved. The worst drivers tend to be white van drivers and young men who think that it is perfectly reasonable to whizz past a cyclist with inches to spare at 40MPH.

Today though there was not much traffic about - from the smells as I cycled through the villages most people were out barbecuing in the garden. I also saw a small Muntjac deer eating grass by the roadside, I am not sure who was the most startled - me or the deer.