Pootling around the Fens on my MTB

Having gotten out my old MTB I have found it really enjoyable riding around some of the tracks here in the Fens. I suspect most of the benefit comes from having thicker knobblier tyres,. However after a few times out on the MTB I seem to cycle feel much quicker when out on my touring bike. Each of my bikes has a slightly different riding position. Generally when I tend not to worry too much as long a the saddle is at the right height for pedalling. When cycling from Bangkok to Saigon last November I used four different bikes (not through choice - hire problems). After an enforced rest from cycling (car accident - broken collar bone - see older posts, Feb 09) I find that it has taken a little longer to get used to distance cycling - I also notice the slight differences in ride position.

The MTB certainly makes it easier on some of the rougher tracks in the flatlands - although you still have to concentrate on the track ahead it is more stable when going over loose stones. I now find that if there is a track alternative to a few kilometre (miles) of road then I take the track. You see more of the agricultural side of the flatlands that way. Whilst things seem to be growing at a rate of knots with the sunnier, warmer weather one field I cycle by seems to be struggling. The pictures go back in time starting with yesterday

Yesterday - the crops seem to be a dull green and wilting! 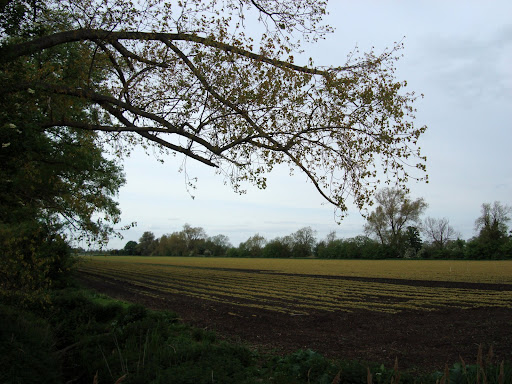 Last week after the plastic was removed they were bright green and seemed to be thriving from the mini-greenhouse effect. 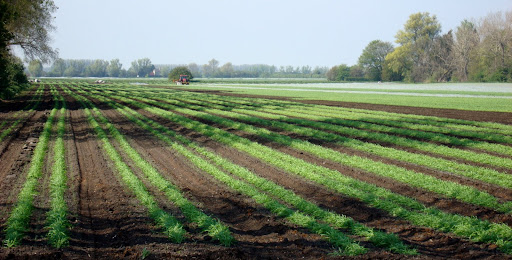 A couple of weeks ago the evidence of growth was quite clear - the plastic is perforated to allow rain to get in. 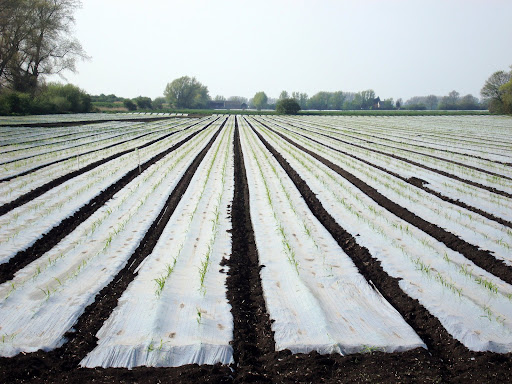 This was taken when leaves were only starting to appear on the trees . 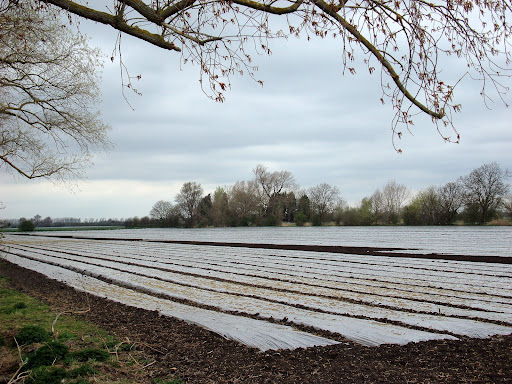 The weather has not been quite so sunny - but it does mean more interesting skies photographically. I think the yellow helps to make the countryside more cheerful - although apparently some people find the pollen extremely unpleasant. 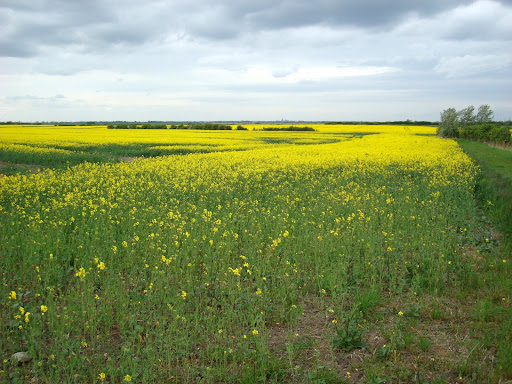 When the sun shines through it really lights up the yellow. 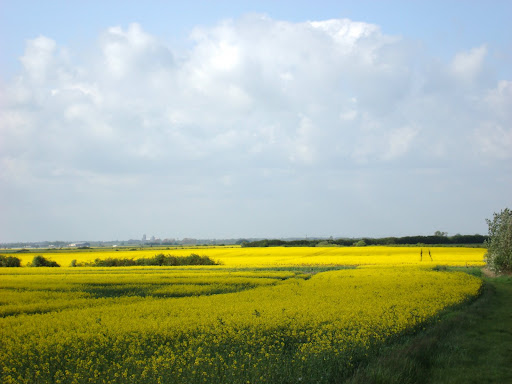 Here is the bike parked up whilst I take some pictures and will be having a drink. I carry a few tools and inner tubes in the rack-pack - useful because it easily transfers between bikes, I also carry a few pounds and the ultimate multi-tool my phone - which also has GPS should my GARMIN unit fail and I was unable to work out where I had gotten to. From the sign post you can see I had some choices - I've been on both of the by-ways but yet to explore the Bridleway. 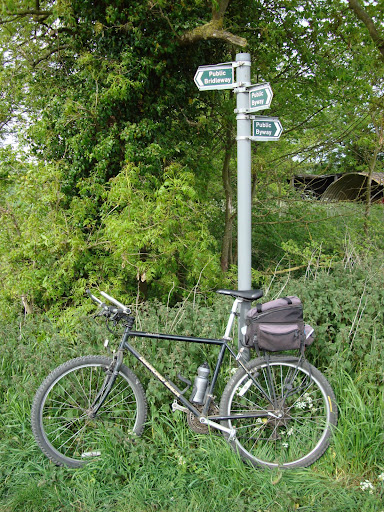 I do find that on the MTB I tend to explore a little more - here is a windmill in Wicken Fen village seen from a pretty reasonable bridge for walkers. 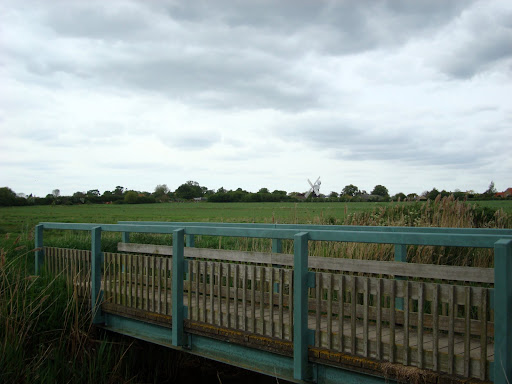 The same windmill a little closer - unfortunately my small Sony Digital Camera has only a 3x zoom - but a great battery life, 12megapixels and it is pretty small so easy to carry

Although we have had some windier weather it seems to die down a little in the late afternoon - the windmill is only turning slowly.

This is a part of England that has a fairly low (for England) rainfall the farmers have to ensure the crops get irrigated. This machines crawls along the field watering as it goes.

However this part of the UK is also low-lying and with many drainage ditches which supply the water for irrigation and are pretty close to most of the fields. You often see tractors towing the reels of pipe for irrigation. The pipes can also be found running across tracks as well. 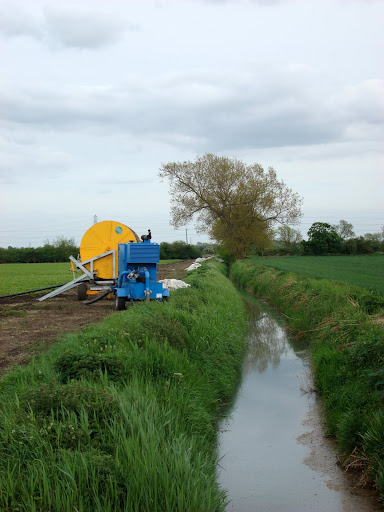 With cloudier skies there is more interesting light - it was not really this dark, the camera has adjusted for the sun, but it provides an interesting silhoutte. The bank you can see is a higher level drainage ditch (or Lode) 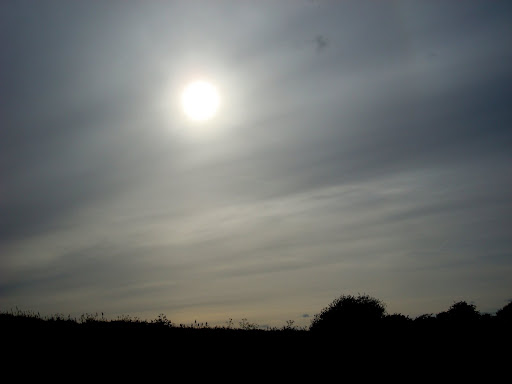 I followed a track that had been too bumpy for my hybrid bike, it led to an interesting bridge. I took a few photographs, but when I have more time I will follow the path a bit further. 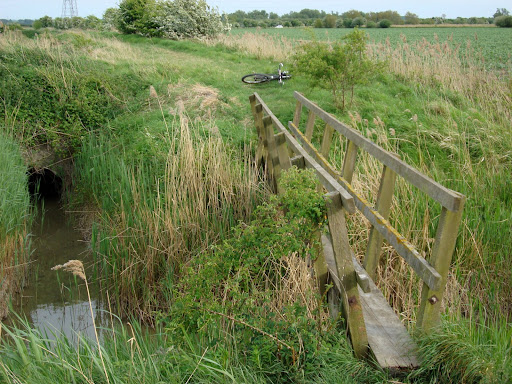 The footbridge was at the intersection of two drainage ditches - quite large ones at that. I wonder how the deer get around - some of the small muntjac don't look as if they could manage. 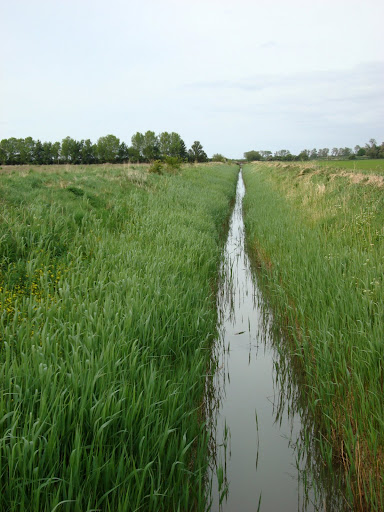 This is the path on the other side of the bridge. Definitely visible but not highly used. 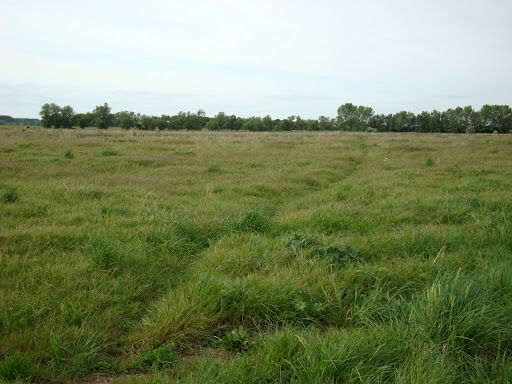 On the way back through White Fen I came across the dog walking by car again. As you can see it is quite a small dog and has never been any trouble - but the owner was keen to try and get the dog in the car when they saw me. I am not sure whether it is because they are concerned that the dog will get me - or perhaps that I might inadvertently run the dog over. 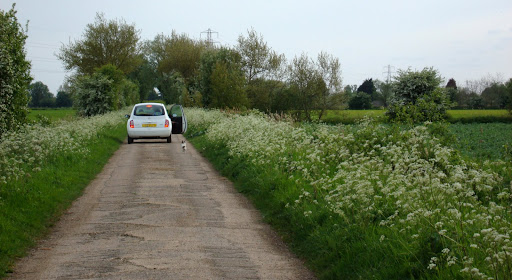 The nice think about random track exploration is that I tend to get more interesting cycling and still find new places to explore.