The weather has been glorious for the last few days here in the Flatlands. On Thursday I gave a short talk to a bunch of aspiring entrepreneurs, and then enjoyed a BBQ whilst answering questions One of the best bits was, that I had mentioned that I was now interested and concerned about the planet and worried about the "denial" about having to make changes in lifestyle (including more cycling :-). This prompted a number of the participants to come and agree with me and express their concerns and confusion as to why Global Warming was not being taken more seriously. Unfortunately here in the UK there seems to be too much focus on MPs expenses and too little on the future of the planet. Mind you I do agree that some of the claims they have been making were outrageous and it was pathetic to hear the oft-repeated it was within the rules. We have a right to better moral integrity from our leaders.

Anyway Thursday was a late night as I did not get home until 10pm so I decided to head off for a day's cycling on Friday. I had one conference call towards the end of the afternoon, so my only constraint was to ensure that I was somewhere near a base-station at 4.30pm. I managed to get emails out of the way and set off around 10am. My favourite food of choice when cycling is jelly babies. whenever my local supermarket does a twofer I stock up on them. (Two for One). They are light, yummy and help to prevent the bonk! (Cyclists term for running out of energy.) In fact I have just checked my supplies and I am down to my last packet - must get some more in.

The weather was sunny and warm, not quite as warm as I was expecting, but warm enough for a t-shirt, shorts and sandals. I have just bought some new sandals I like to read other people's tales of cycling, both for inspiration and to learn and perhaps seek new challenges. There are quite a few I read. Note I am not a racer, I cycle for pleasure, commuting, health, vitamin D and to try to reduce my carbon footprint. I do drive, but for the last couple of years my cycling mileage has exceeded my driving mileage - but I do admit to owning a 4x4, which is great for carting bikes around. Back to the sandals I saw on this Blog - "let's Go Ride a Bike" that the author had gotten some Keen sandals - "a bit ugly but never get smelly". I like to cycle around in sandals, but do sometimes get a bit worried about exposed toes and smells. So with a bit of digging around found that they were also sold in the UK by Webtogs. They did look a little chunky, but would take Shimano SPD clips and had some sort of anti-smell capability so I bought a pair. They arrived very quickly, the Post Office Mail delivery is very good round these parts. My "posties" cycle and yet manage to carry loads of stuff including the huge box my new sandals arrived in.

I did not bother with putting the clips on but just set out to road test the sandals. I set of on my touring bike because my plan was to head to Thetford Forest and take a trail through the forest and then take it from there. I took a more direct route than usual as I headed out, but this plaque by the roadside in the village of Burwell caught my eye. Wise woman or Witch!. 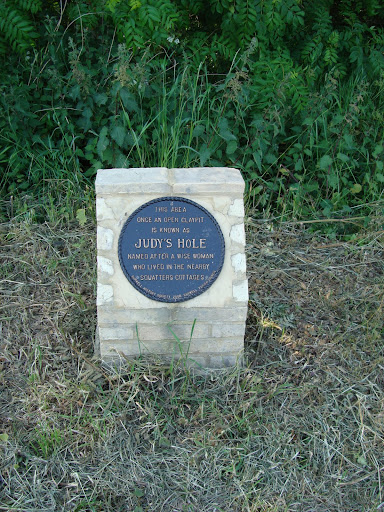 Thetford forest has a couple of Sustrans routes through it (13 and 30)- which have some really nice off-road bits. So I generally get over to a place called Hockwold cum Wilton and follow route 30from there. I have just checked the Sustrans web site and noticed that I missed a bit of off-road on the way into Hockwold, must remember that for the next time I am over in those parts. Here is route 30 through the forest. I only saw one other person here, another cyclist. I must be getting out of practice or doing to much cycling on my MTB. I ended up having to walk on chunks of the soft sandy track. I have cycled this on my Longstaff in the past (25mm tyres) but I struggled this time around. I find the back wheel slews to the left and digs in and I end up jumping off the bike. I am sure I could do it with the bigger knobbly tyres on my MTB but a lot of this ride was also on road which is slower on the MTB - swings and roundabouts.

I was plenty warm enough and had put on some suntan lotion, I use factor 30 which for my skin does the trick. When I was cycling in Cambodia it was enough to stop any burning, as long I as properly applied it to all exposed skin. At the end of a day's Cambodian cycling it was necessary to apply anti-mossie lotion because we were in a high-risk zone. (Western Cambodia - in the news at the moment because they are concerned that the malaria parasite is becoming drug resistant). Wherever there was even the slightest sunburn the anti-mossie lotion stung- so I became very careful at applying the sun-tan lotion each morning. But in England it is not so much of a problem and anyway the sky was quite cloudy - or so I thought! 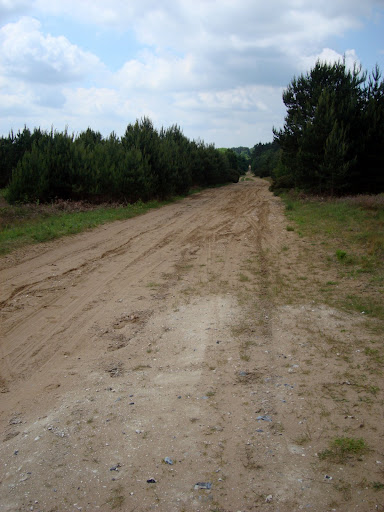 After route 30 I generally take a short-cut onto Route 13 which goes North through the forest along some idyllic paths and tracks. Quite a lot of this area is used for military training purposes and so the countryside is unspoilt, but there are warnings about unexploded ordnance - a bit like cycling through Cambodia actually. I stopped a one sign to read about Thompson Common, part of Norfolk Wildlife Trust. I must have accidentally pressed the shutter button 'cos I did not intend to take this art shot of man and machine in racing harmony, since I was standing to one side of the bike at the time. 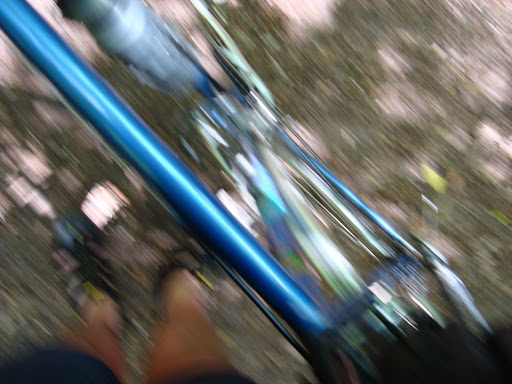 I assume that the presence of the Army training grounds has blocked off quite a few country roads in the area - this one led to an Army Camp Gate but the Rhododendrons looked striking peeping though the woodland. There roads were so little used that they had grass growing up the middle. 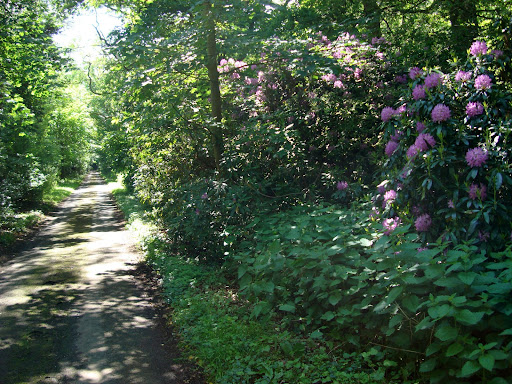 As I did not want to back-track along that country road I checked my GPS and saw a footpath that would eventually get to another road. As a normally law-abiding citizen I would not usually cycle on footpaths, but this one although it had a sign indicating footpath also had a no motor vehicles sign, implying that bicycles were allowed. I did get off at one point as two walkers were coming the other way, no dirty looks though only pleasant hellos. By this point the sky was clearing and the sun was shining brightly. Here you can see a few puffy clouds and very dry soil. 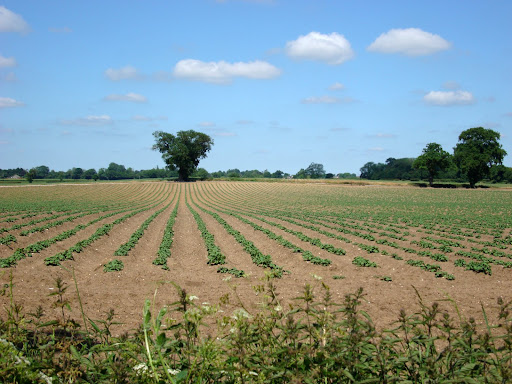 As I turned the corner along one lane I realised I must have taken a wrong path and ended up in Peru. We went there on a family holiday a few years ago and the phrase "alpacilicious" was created as the Alpaca steaks were quite tasty, we did not eat guinea pigs though, we tried bu they were off in the small restaurant in Cusco over looking the market square. 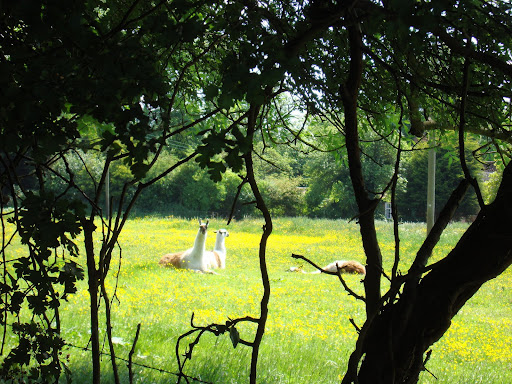 My lunch stop - nothing like warm jelly babies and lemon squash for lunch. 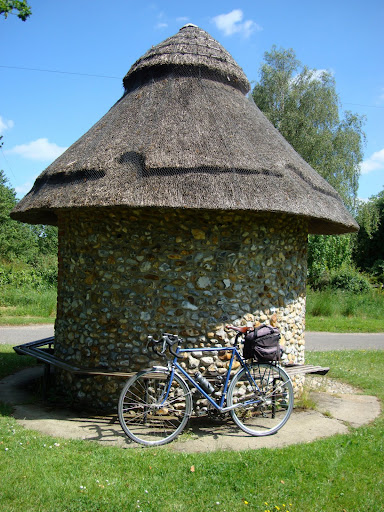 I rejoined part of the Pedder's Way, a long-distance footpath in these parts. This bit was a restricted road so it was perfectly reasonable to cycle along. I did not meet a soul on this one, it was an alternate route for the Pedder's way but it seems most people walk on the other alternative. 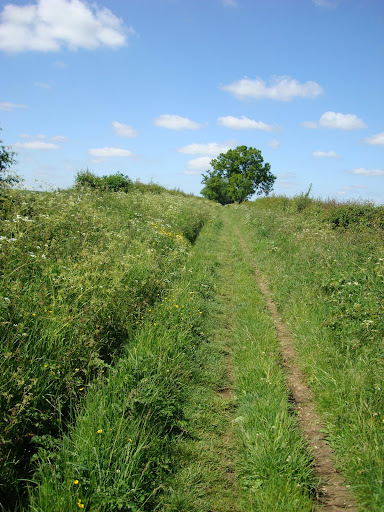 There is much more concern and quite rightly so for animal welfare and it is once again common to see pigs out in the open rather than being reared in factories and a good thing too. Although apparently here in the UK we forbid our farmers from certain "factory" methods but still allow meat from animals kept to those standards to be sold. An example of how Government does not always practice joined up thinking. 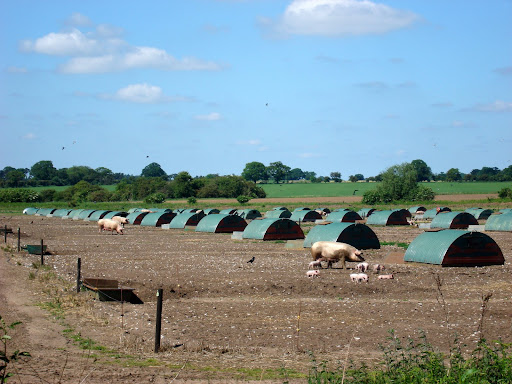 Eventually 4.30pm came around and I had to stop for my call. It was in the middle of nowhere along a no-through road - although I knew it was OK on a bike. There were fields all around and irrigation sprays pumping away as I took part in the call. Since there were quite a few people involved I muted my side unless I had to talk.

Here is a picture of one of my new sandals. They were very comfortable for walking on the sandy track in Thetford forest and for cycling in. They also seemed to allow a bit of foot-cooling breeze in as well. One problem I discovered when I got home was that I had neglected to put sun-tan lotion on my feet so that I had to very red stripy markings on my feet. At first I though I had been bitten by an insect but when I scratched it realised it was sunburn. 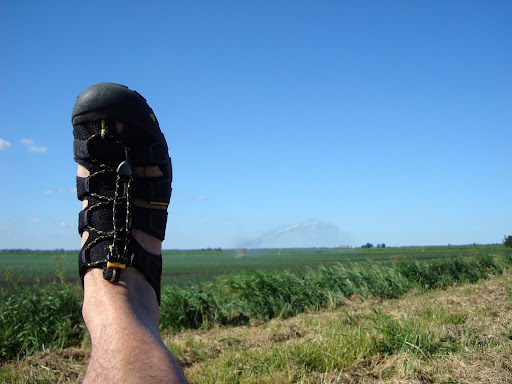 After the call I carried on the road which claimed to be a no-through road, this river is the reason, quite big but called the Little Ouse. 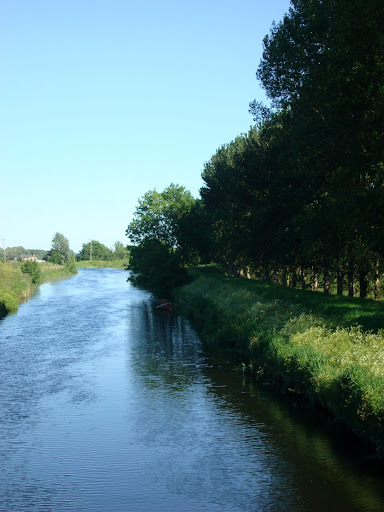 This is the "non-existent" bridge that cross the Little Ouse,. steep for the flatlands but no problem for motor vehicle of bicycle. 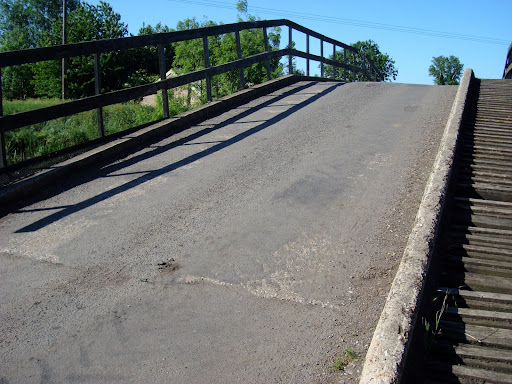 Then a quick scoot back through Ely onto the Sustrans Route 51 and on the way a quick stop to take a picture of this eyrar of Swans. 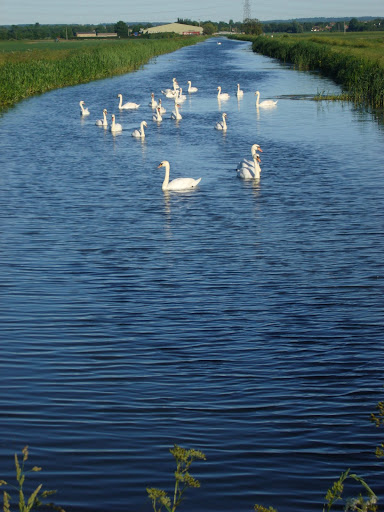 Apart from sun-burnt feet it was a beautiful day out and although I was a little weary I had no aches or pains from my shoulder after over 170Km/100miles and 7 hours in the saddle.