Although it has been a bit cooler and the skies a little cloudier it has still been very pleasant Spring weather. Over the weekend I took the opportunity to pop out on my MTB and continue to explore some of the tracks that weave their way around the fields. Many of them do duty as roads for the tractors. Mind you I have observed some questionable road use over the weekend as well and that will form the basis of my next post!

The yellow fields (Oil Seed Rape) continue to grow and it seems are the bones of contention for some. There has been an exchange of letters via the Letters page of the Times Newspaper, with punch and counter-punch criticising or praising the cultivation of Oil Seed Rape. It seems that for some it can cause significant hay-fever, whilst it also apparently is the pollen of choice for bees. Personally I like the yellow fields, dotted around the countryside. Since farmers rotate their crops from year to year we are unlikely to see everything in yellow . 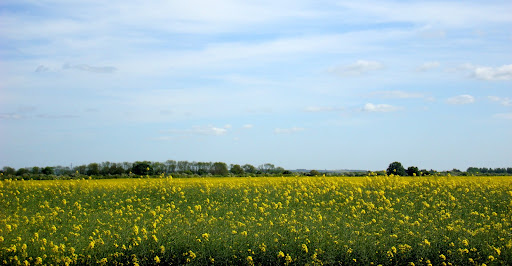 In keeping with my habit of exploring new routes through places that I know I went a different way around this "lake" - I passed a herd of cows grazing and cycled along enjoying listing to a BBC podcast (Science in Action) as I got closer to the gate across the field I could hear a sort of galloping noise behind me I turned around to see the herd of cows galloping toward me. I grew up in Somerset and am well used to cows and have even hung around as cows were milked. They used mobile milking trailers in the fields in those days - not sure that would meet hygiene regulations nowadays - but a common sight when I was young. This was actually a herd of young cows, showing curiosity, as soon as I stopped they stopped. So in the end I just carried on across the field like the Pied Piper - but with cows. 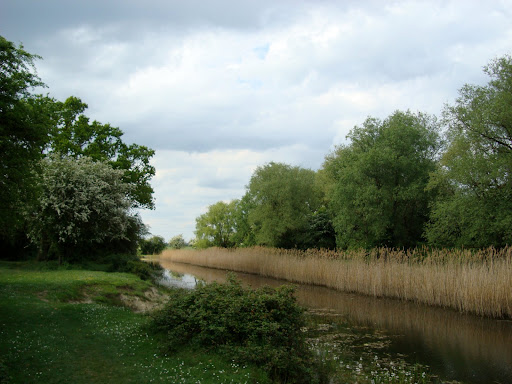 The warmer weather encourages algae growth on the Lodes as well - there seems to be quite a growth appearing on Burwell Lode next to CockUp Bridge. 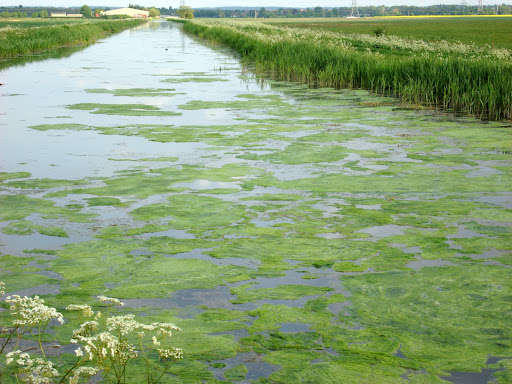 Unfortunately the nicer weather must also be encouraging house renovations and some just can't be bothered to take their rubbish to the tip. Or more likely a cowboy builder trying to boost profits by avoiding the tax payable if this sort of rubbish is taken to a Landfill Site. There are massive concrete slabs just next to a picturesque footpath. This serves to increase my belief that there is a general increase in self-centredness here in the UK! 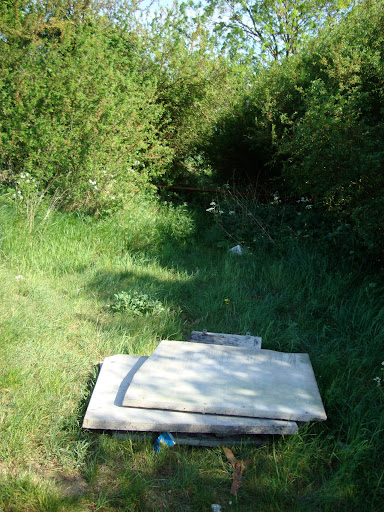 Mind you it always surprises me how you often see farm machinery rusting away in fields. It is often said in the Newspapers that farming is a tough game and many barely scrape a living - well why do they leave machinery lying around to rust. Perhaps they need the Farmers equivalent of Ebay. 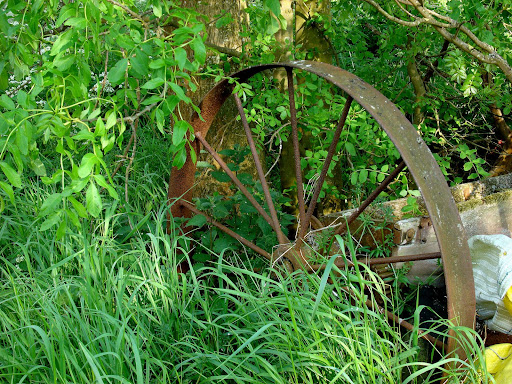 These two pictures are of corrugated sheds and various implements quite close to Soham. Not hurting anybody but not doing anybody any favours either. 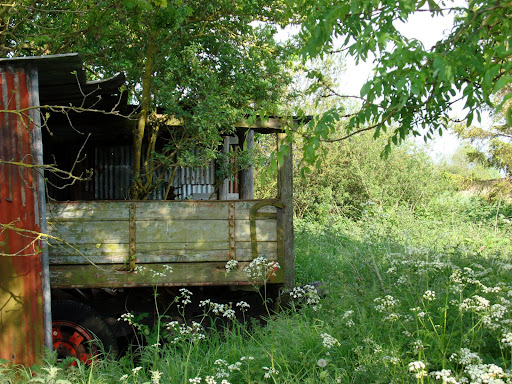 With the clouds in the sky comes interesting lighting. Unfortunately by the time the photo has been compressed for this post it is not so evident. When I took the picture the beams of light shining through the clouds were quite evident. When my son was a young boy he used to call them "miracles". It was just around these part of the ride that a met a small Muntjac deer on the verge nibbling at the grass - I was not quick enough with my camera though. Later I saw another running through the fields. 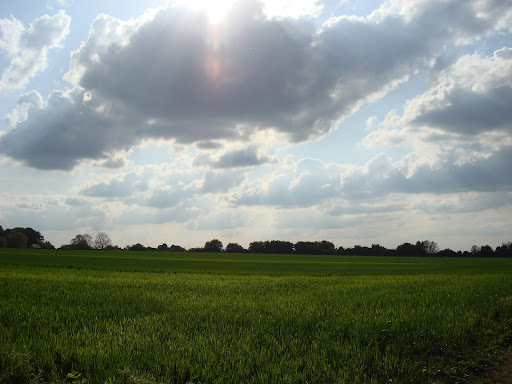 The last time I cycled along this way I stopped at this bridge and headed back. This time I followed the track a bit further. The handlebars on my MTB were too wide to fit at the further end of the bridge, at first it acted like a "Guided Cycleway" but towards the end I had to resort to the cyclists trick of tipping the bike backwards and running it vertically on its back wheel (whilst walking behind it of course). 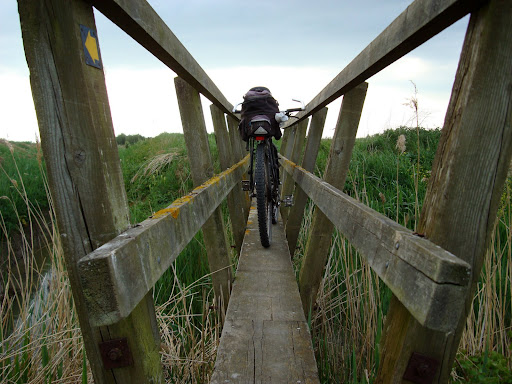 This was marked as an unfenced track on the OS map - it was actually not too bad cycling along it on my MTB - the thing to be wary of is hidden rabbit holes. 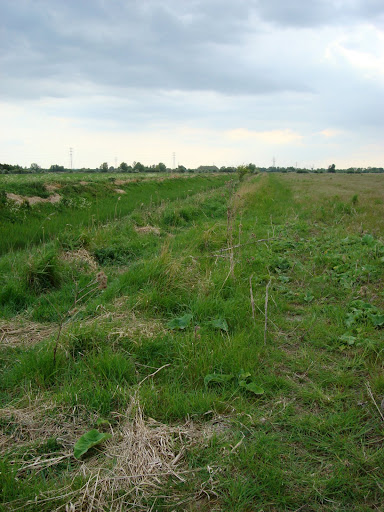 Cycling along another track I noticed this new form of water jet propelled plane trundling along the grass runway ready to take off. Actually it is a field of turf being irrigated - those drainage ditches come in handy for the farmers. 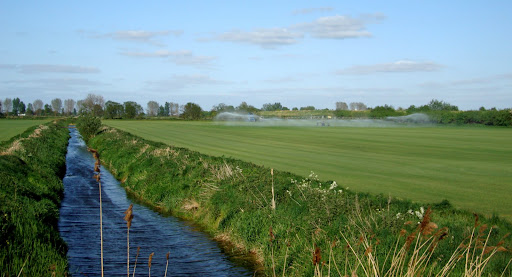 The path itself was not quite so welcoming. I have noticed that by-ways - along which there is a right of way for pedestrians, cyclists and I think horses/riders can often me signed with a "Private Road" notice. I suppose it is technically a private road with no right for motorists and quite right too - it does seem also to serve as a form of intimidation to stop law-abiding cyclists in their tracks. A good job I'd checked the map, it is not so much the sign that puts me off actually, more the impression that if it is a private road then it might not be going anywhere. 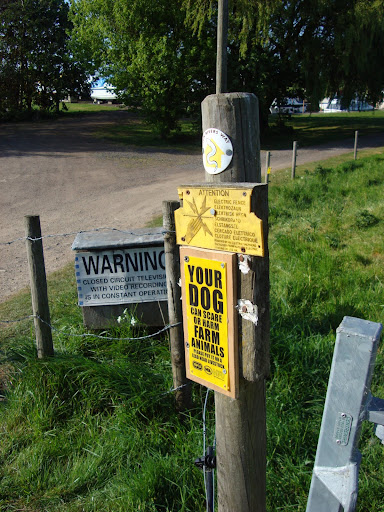 At least there is a sign indicating it is a footpath for walkers (which is what I did - i.e walked my bike along it).