Yet Another Pootle around the Fens - Farming Seasons and Cycle track repair.

When I do not have a lot of spare time for cycling I tend to stick with a route around Wicken Fen, depending upon the time available to me I add or subtract bits from it - including tracks, by-ways and smooth road. As I know it quite well it means I can make best use of my time. It also means that I see changes in the fields as the seasons progress. Talking about tracks I have been impressed with some of the road re-surfacing in the Cambridge area. A path from Cherry Hinton through to Mill road has been re-surfaced and roads either side of White Fen have also had a smooth layer of tarmac. I don't think the farmers care that much in their tractors and there are very few cars so it appears to have been "driven" by the opening up of the route as part of the Sustrans Connect2 program.

One of the Sustrans' routes - Number 11, which has been around for a while, goes through the National Trust Wicken Fen nature reserve. This bit of it used to have a scruffy bit of tarmac, which was thin and bumpy but provided a fairly solid base for cycling. For the last few months it has been in a state of partial repair. It has been widened and a base layer put down, presumably before adding a surface layer. The benefits of a wider path are that it will allow cyclists and walkers to pass each other more easily and brings the path up to the level elsewhere in the reserve. It seems that weather problems have affected this bit of path upgrade, wrong leaves on the line perhaps - at least the NT have put up signs to explain what is going on and to warn cyclists. As it happens this loose gravel is pretty awful to cycle on when using thinnish tyres, I use tyres which 26mm (1inch) wide, not as thin as on a racing bicycle but not as thick as on a Mountain bike.

The best approach whilst the track is like this is to sit back on the bike in an easy gear and cycle reasonably quickly whilst spinning the pedals - that way the front wheel does not dig in and the momentum takes you through the ruts that form in the gravel. What you don't want is to have to slow down and veer around the track. Which is what I got when meeting some people walking their dogs coming the other way. Generally I find that most dog owners recognise the inherent unpredictability of dogs and call them to one side. In this case I slowed down and moved to the left side of the track - unfortunately the owners threw a ball of to my left causing one of the dogs to run across and back directly in front of me. A good job I was not clipped into the pedals otherwise I would have been off my bike. All I got was a grumpy stare from the dog walkers. Perhaps dog walkers feel like the new pariahs - occupying the role that used to be taken by cyclists on these paths? My advice - pay attention to the pieces of paper at the top of the fence - "Take Extra Care"/. 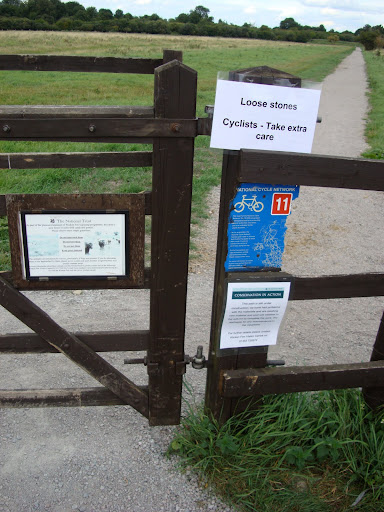 It will be a nice path when they finally finish it though. No ponies around today - they sometimes gather around the path - but behave more predictably than dogs. Mind you they can be inquisitive sometimes. 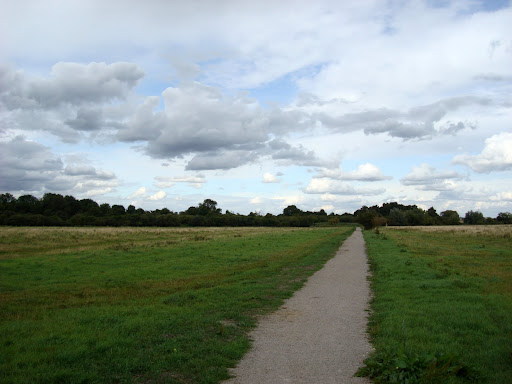 I was surprised to see this field, not only has it been harvested, ploughed and drilled (something else planted) it has started growing a new crop already. 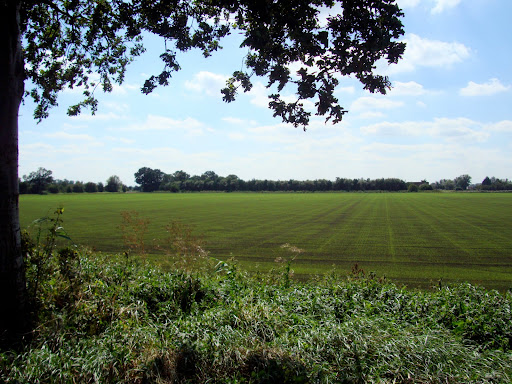 Whilst on the other side of the road, beneath a blue sky with a few puffy clouds a field is still awaiting the combine harvester. I have not got a picture of it, but a little bit further along a field of onions was being harvested - not by a machine - in this case a gang of workers walking behind trailer with a "tent" and conveyor belt being towed by a tractor. After it has passed by it looks as if a swarm have locusts has passed by with a smell of onions in the air. 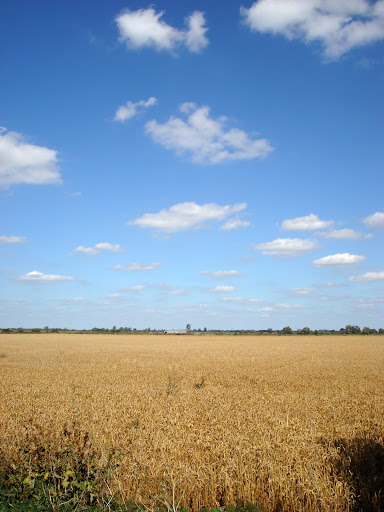 The farming is relentless at this time of year - he is a "Before" picture taken last weekend - gently waving in the wind. 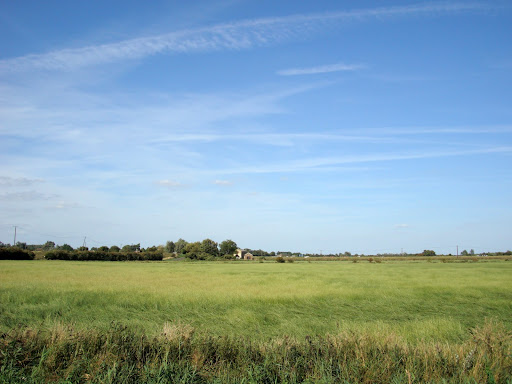 This is the "After" picture taken yesterday - it has practically been harvested - the tractor is just coming to the end of the field. The bales left behind are quite green. 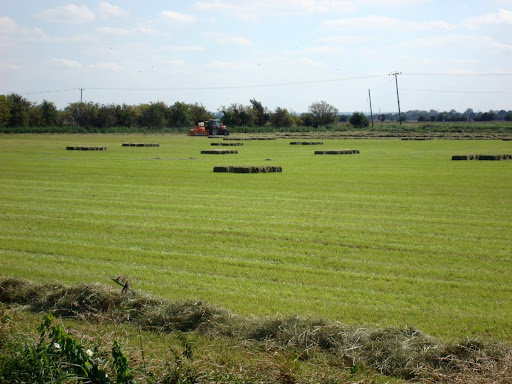 I then unfurled the bike wing and headed off to the coast to take this picture - not really - when they built a new Bottisham Lode Bridge to open up the White Fen path they also created a couple of ponds from the clay. I was struck by how clear the water was. 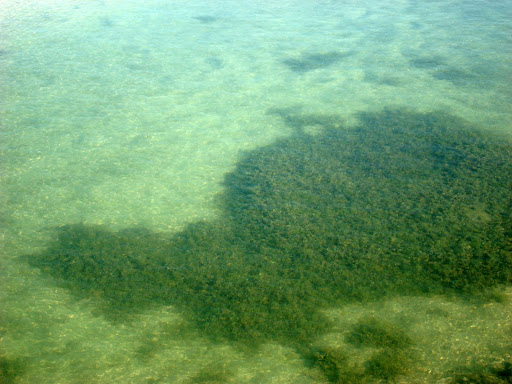 This is another shot of one of the ponds with an island in the middle it will be interesting to see how the wildlife develops. 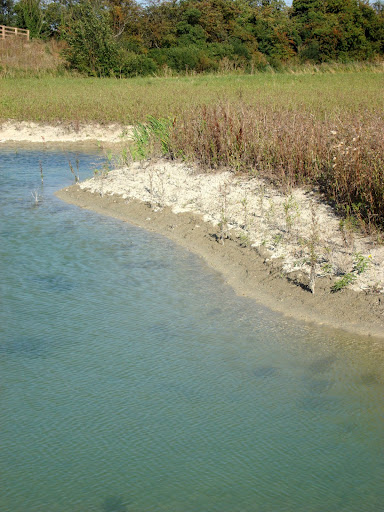 I was hoping to pop out for a spin this afternoon as I am flying off on business tomorrow - it looks pretty windy thug.