Yet Another Pootle - Cycle track update

Despite the wind and the need to pack and prepare I still popped out on my bike - I took a slightly different route but still went out through White Fe. I mentioned that they had installed a box with what looked like sensors across the track - well today they had a couple of people near the bridge over Swaffham Bulbeck Lode doing a survey of people passing the point. The sign indicated that it was on behalf of Sustrans and there was an additional sheet for cyclists. There were questions on me - age, sex etc and then on my reason for travel and then on my propensity to take exercise and to cycle and walk.

I am in favour of Sustrans working with the NT to open up these routes. For me they are a welcome way of avoiding the traffic for some of the route from to Upware. It is a single track road with undulations caused by peat shrinkage. For a cyclist there are some extremely intimidating drivers there is enough room for a car to pass a bicycle, but it is only safe at slow speed. Unfortunately, the boy racers of this world seem to think that it is ok to whizz past. What they don't take into account is how the edge of the road is all chewed up and how easy it is for the edge to throw the front wheel of the bike. I was once hit by a gust of wind into a ridge at the edge of the road which then tumbled me off my bike. No damage - but if it were to happen when a boy-racer went by!

It turns out that the repairs to the roads to and from White Fen were funded by the Sustrans/NT Connect program, although apparently the farmers grumbled about it according to the tow people doing the survey! For the record the surfaces are great and here is the road from White Fen leading to the Upware road.

Although I have not got a picture of the loose gravel path, awaiting repair nearer to Wicken Fen I was also chased by a dog today, I am sure the owners thought their little pooch wouldn't hurt a fly - but it would have hurt me if it tangled up with my wheels. 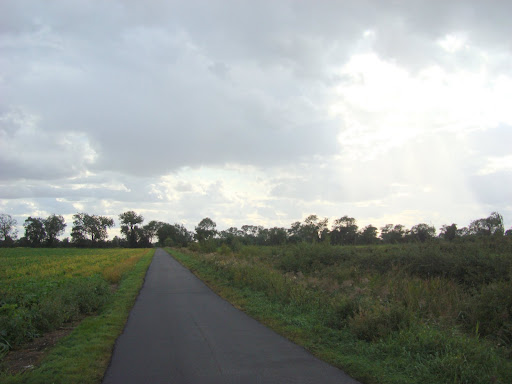 Here is the contraption used when the onions are stripped from a field. You can see where the field has already been processed to the right hand side, just past the portaloos. Sometimes they have blue and pink portaloos - I assume for the men and women doing the work. 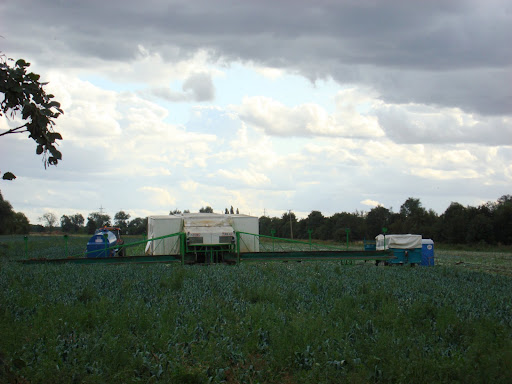 Actually I enjoyed my cycle ride despite the wind and also went further than planned at around 50Km/30miles - hopefully that should stave of DVT when I fly off to San Francisco tomorrow.