Monday 31st, January: Yesterday as I sat at my computer the sun was shining in so much that I had to lower the blinds to shade the screen. I had also attached the new camera lens to my camera, which was sitting patiently in ready for an outing. So I convinced myself that it would be a good idea to have a long lunch. One of the advantages of working from home is that I have a bit more flexibility on timings (and of course I save on commuting time). So after a quick change I loaded up the MP3 player with last weeks Archers podcasts and More Or Less, a Radio 4 program that drills into the numbers quoted in news reports to determine the "real truth". Then I popped some Jelly Babies in my pocket, a bottle of water on my bike, my camera over my shoulder and set off.

Although it wasn't warm, the sun was shining, so much that it felt wonderful to be out cycling. In order to give my new lens a decent test I went out to Wicken Fen and back to see what it was like using a "long" lens versus the one I normally use. The camera I generally use when out cycling is a Panasonic GH1 (the red one), it is a cross between a "proper" SLR camera and a compact camera. It uses electronics to display the picture either on a screen or in the viewfinder rather than a mirror and is smaller than an SLR, but it uses reasonable lenses that are interchangeable. The lens I normally use is rated as 14mm to 140mm - so has a 10x zoom factor. Because of the size of the sensor in effect it behaves like a 28mm to 280mm lens if compared with a 35mm SLR. That sort of range is pretty good and the lens is not that big either which is why I like it for my cycling photography. (I used to use a small Sony DSC-W200 for cycling but that has now been relegated for times when it would look a bit strange if I walked into a meeting with a camera slung over my shoulder.

So back to the new lens - effectively 200mm to 600mm which is really quite long, a smaller zoom factor but quite a magnification at 600mm. I didn't take any other lens with me - that way I had to use the new one. I took the same route out of Cambridge along the NCN51 until Swaffham Bulbeck and then cycled back to Lode on the Longmeadow Cycleway (I made up the name) and then out to White Fen, Upware, Wicken Fen, Burwell, Lodes Way, Lode, Bottisham and finally Cambridge. I didn't stop until I was out of Cambridge (well except for the odd junction and red light of course.) This was a scene I took the last time - a partially flooded field between Bottisham and Swaffham Bulbeck. This part of NCN51 is not shown on the OSM Cycle map as a shared used path, but is shown as traffic-free on the Sustrans map. Basically it is a fairly narrow pavement that seems to support tidal-flow use - school-kids cycle into Bottisham in the morning and out in the afternoon. If you are with the flow it is fine, are you aren't it isn't. When I cycle along the route, if it is clear I generally use the shared-use pavement and if it isn't clear I use the road. (Although the way some motorists overtake I sense their disapproval - or maybe I am just paranoid.)

Back to the picture - it was hard keeping the camera still, but you get to see the sheep in the field behind the trees. One common theme of many of my pictures is that the electricity cables are evident. It is quite hard avoiding them when taking pictures around the Fens it seems. 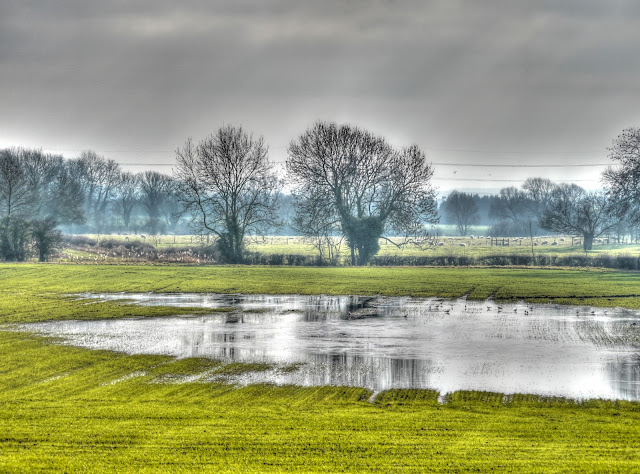 Just before cycling into Swaffham Bulbeck I heard the noise of a couple of helicopters, but deeper than the normal. They turned out to be Apache Helicopters, if my identification from this hurried photograph are correct. They were flying very low and I only just managed to get my camera to get this picture as the second one dipped below the trees. They are twin-engined which I guess gives them their distinctive sound. It just goes to show how far the anti-cycling lobby will go to get bicycles off the roads.

Then cycling into Swaffham Bulbeck I noticed a brightly coloured blanket on the verge. It was partially covering a deer that looked as if it might have been hit by a passing car. 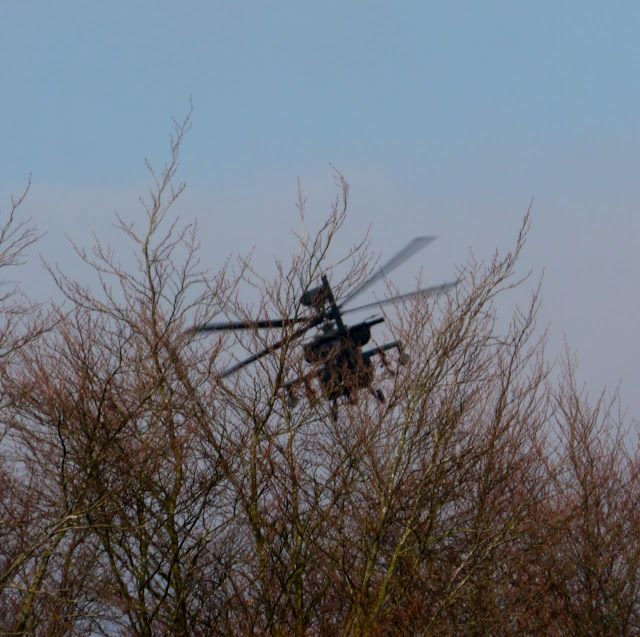 This is the route into Lode from Swaffham Bulbeck. Here the shared-use path is slightly wider and it is easier to pass pedestrians and oncoming cyclists. Although I found myself passing an oncoming lady and pram on the right hand side which feels odd, but it seems that there are no established rules of the shared-use path. Anglesey Abbey is just past the crossroads on the right- where they are worried about getting their snowdrops stolen apparently. Yes there is a car halfway across the path - and just behind the Traffic Island Warning sign on the right is a speed-activated "Slow" sign, I guess it must be more visible from the road. 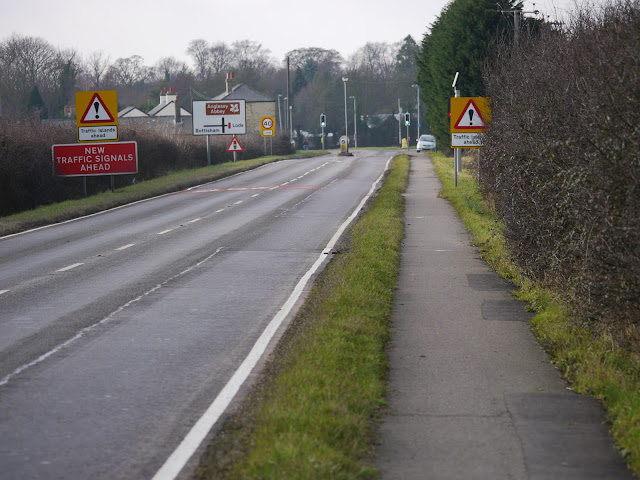 The Lode Meadow Cycleway (TM) had suffered a bit of cracking recently - I think that road repair lorries had "parked" on the pavement. The cracks have now been repaired though, which is good news - they looked as if they could trap your wheel. Unfortunately with my zoom lens on it was quite difficult taking a picture of the repairs. I should have gone past and taken the picture from a distance. The next photostop was after passing through White Fen when I stopped on the Swaffham Bulbeck Lode Bridge, built as part of the Lodes Way path development. This bridge is around 240m down-Lode. The good thing about zooming in on it was that it cuts out the pylons than run across in the background. I like the way the vertical posts clearly reflect, but the horizontal rails don't. 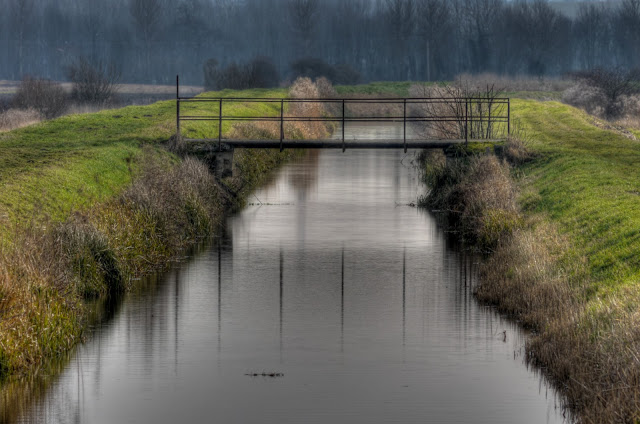 This is the view up the Lode from the bridge. The zoom lens tends to compress the perspective, enhancing the effect of the bends in the river (Lode). 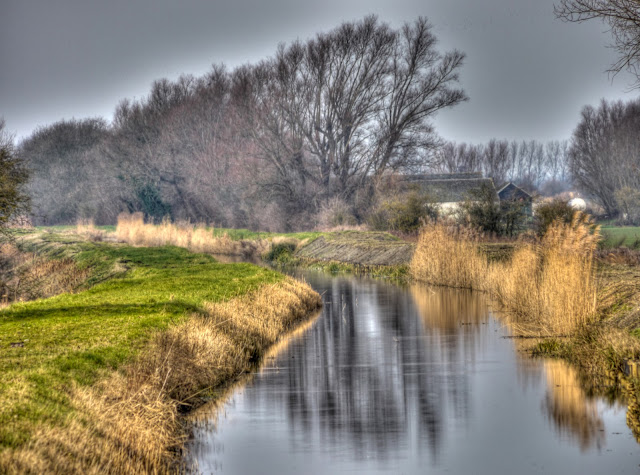 I almost stopped at Upware, but was enjoying the cycling too much. My average pace was faster the it has been, which is a good feeling. After not cycling for a while it is a bit depressing to find yourself cycling more slowly, conversely when you find yourself speeding up a bit it feels really good. (Not that I was going that fast you understand.) The next stop was down a byway just past the the village of Wicken. If you follow this link to an OSM Cyclemap view it is in the centre where the brown, yellow and green tracks meet.

This is a picture of Ely Cathedral, just over 10Km as the crow flies (I used BikeRouteToaster to measure the distance.) It was nicely lit by the sun, it is just a shame that there are telegraph poles (and cables) in the way. 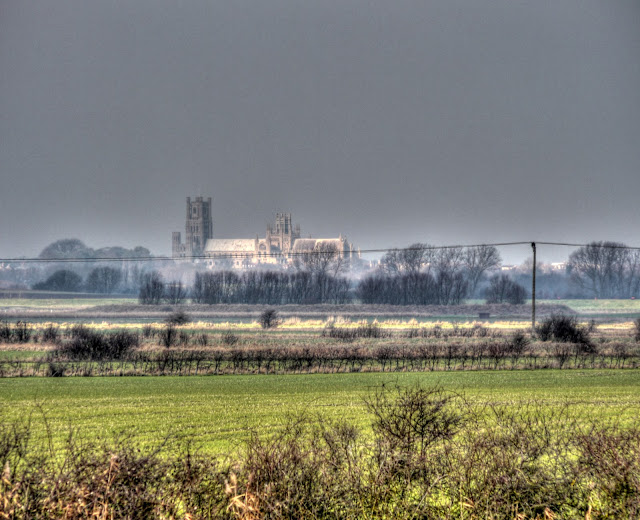 In the same location I also took this picture of a tree alongside Church Road (between Wicken and Soham) it was very hard keeping the lens still and my multiple exposure shots were all over the place - I like the way the sun seems to make the tree glow though. 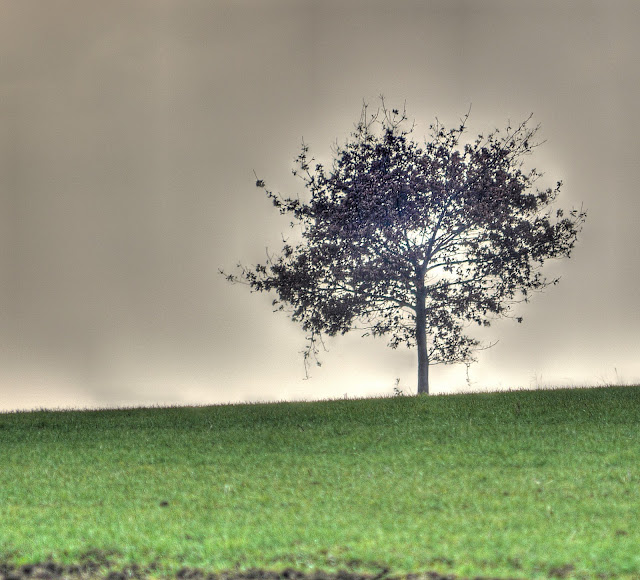 The next stop was in Wicken Fen, I was surprised to see that the "long-awaited" new Wind pump was in place and here it is. I didn't try cycling over it though! I guess I was expecting something a bit more substantial, but judging from the blades it is a high-tech design to maximise its efficiency whilst minimising its "footprint". The fact that the blades are close together should also help to prevent birds and bats flying into it. 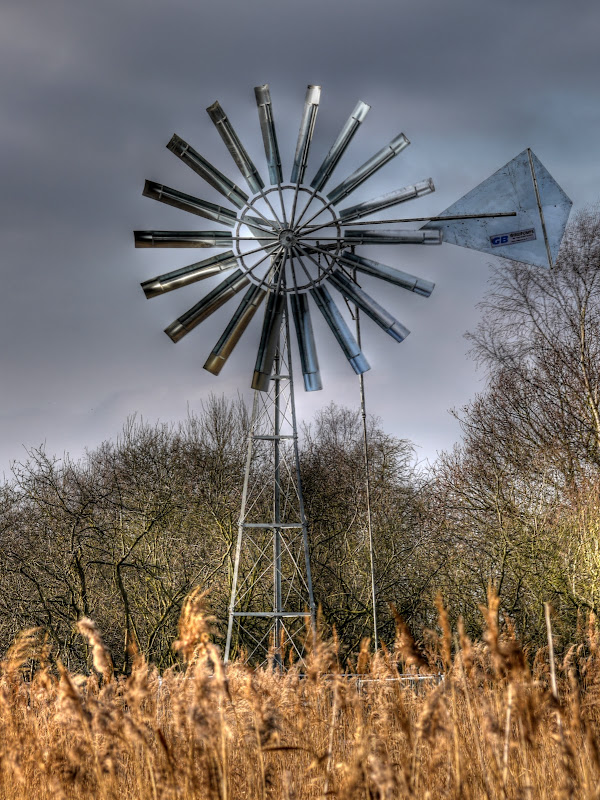 This is a picture of one of the bird hides in Wicken Fen - this one is a tower and gives a good view across the area. The pathway is NCN11 as it passes through Wicken Fen. I forgot to mention that there is a big metal container at the entrance to the path and the surface is not very pleasant to cycle on (of the path, not the container!). 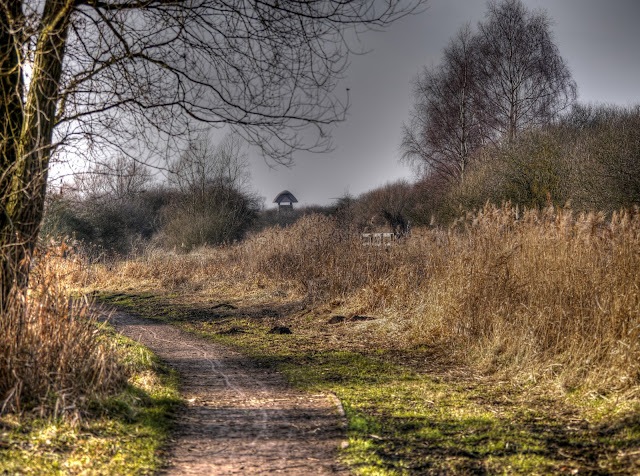 At this point I got of my bike and dumped it alongside the bridge over Monk's Lode (not dumped permanently you understand.) Why - well I had to walk down Wicken Lode to get a bit further away from the new Wind pump in order to make it easier to get a picture of it. The route is pretty muddy though, I was wearing my MTB cycling boots, but I prefer not to get too much mud on them as it clogs up the pedals. This is the route I was heading down, after a short way down the bank it was not so muddy. 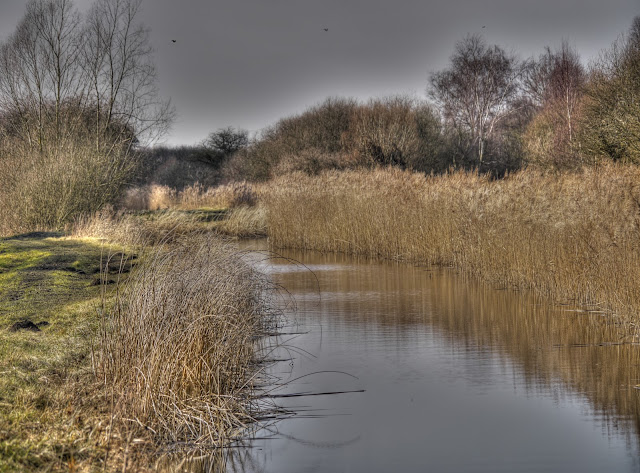 Even after walking down the bank away from the Wind pump it was quite hard getting a shot with something other than the pump in the frame, perhaps I should have walked even further down the bank. 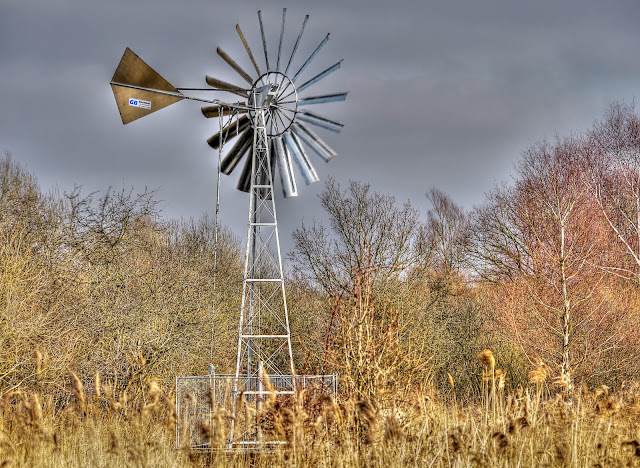 This is the bridge over Monks Lode that NCN51 crosses over on its way through Wicken Fen - my bike was just to the right, out of shot. Yet more electricity cables visible in the background 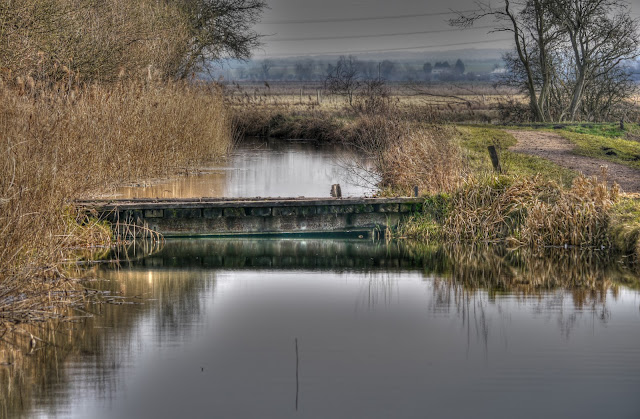 MikeC mentioned previously that work was planned along this track, which is where NCN51 leaves Wicken Fen. It looks as if the path will be fenced in with routes through at each end for the ponies and cattle. I assume that this is to address concerns about the ponies "intimidating" walkers and cyclists, or maybe to stop the ponies becoming to accustomed to humans. Whenever I have been along this path with the ponies across it they get quite inquisitive - although never threatening. Mind you it can be a problem with horese riders getting unwatned attention from the stallions..

This is the end of the path next to Priory Farm, the tractor is powering a pile driver. The path is blocked and you need to walk around the netting area. 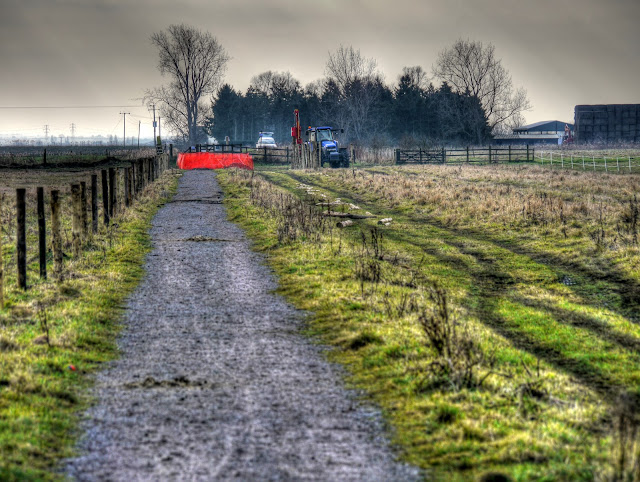 This is the view of the path looking back towards Wicken Fen where cattle grids are being built alongside the pathway. I am not sure whether the path will be fenced along both sides or not. 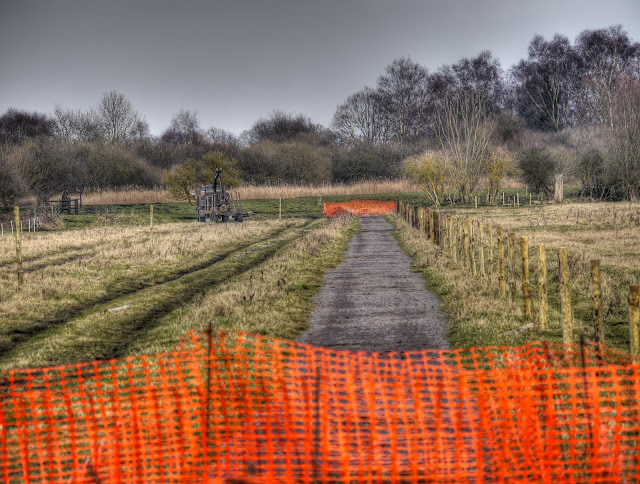 They don't hang about in the National Trust - well not around here anyway. There is quite a lot of work going in to making the Lodes Way a decent route.