Thursday 27th January: Well despite not getting out yesterday I did manage a ride today, my third in the week. Once again it was a meeting that gave me the excuse for cycling. Unfortunately for various reasons I had to give my daughter a lift (in the car :-( ) this morning and the traffic was atrocious which meant that I got home late and so then had to dash out (on my bike) and cycle faster than I would normally do so when going to a meeting (2x faster). Despite the fact that the temperature was only just above freezing by the time I got to my meeting I was boiling hot. I wore a scarf and my new fluorescent yellow "high viz beanie hat". I can certainly vouch for its ability to keep your head warm, in fact the sweat was dripping out on the way home (I took a longer route). We met in the Michaelhouse Cafe - and I managed to lock my bike up on the racks alongside Great St Mary's Church. Which meant I wasn't late - but just in time!

As it was near lunchtime when I finished I skipped lunch (well I had a bacon sarnie in the Cafe - because I had also missed breakfast.) I headed out through Fulbourn, through the Wilbrahams and back along NCN51. Actually I hadn't quite planned it that way, I thought I would cycle up to the Railway Station and then thought why not have a look an the Tins path and so on.

Here is where the Cambridge Guided Busway (CGB) leaves the Railway Station area to go towards the Hospital - well at least it will leave when the CGB is up and running. It is good to see that the shared-use path is clearly marked - although as you can see it is not open at the moment, but will provide a route to the West of Addenbrookes and on to Trumpington. 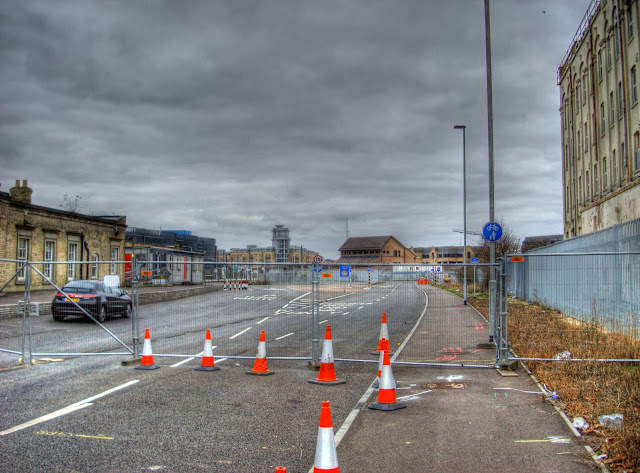 Standing in the same spot but looking the other way you can see the new form of dual-purpose railing and cycle locking stand, there are also cycle locking poles, that can double as street lamps. Sustrans do not seem to have added these methods of cycle parking to their information sheet (pdf). The reality is of course, that there is a significant unmet demand for cycle parking at the station. As they increase the size of trains running between Cambridge and London it can only increase the need as there is not sufficient car parking for the extra passengers.

In the middle of the picture in the background you can see the cycle/pedestrian bridge (Carter Bridge) from Devonshire Road across the railway line to Rustat Road. Which is where I headed in order to have a look at the works taking place on the Tins. 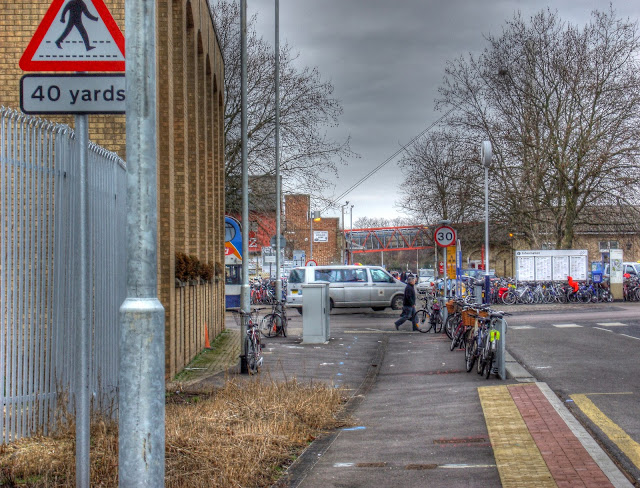 Here is the way onto the Tins from Burnside. The sign says the route will be closed from the 10 January, 2011 for 11 weeks. It is going to be widened and a new bridge put in place. The path also crosses the Cambridge to Ipswich Railway line via a small bridge - apparently it will not be possible to sort that bottleneck out. 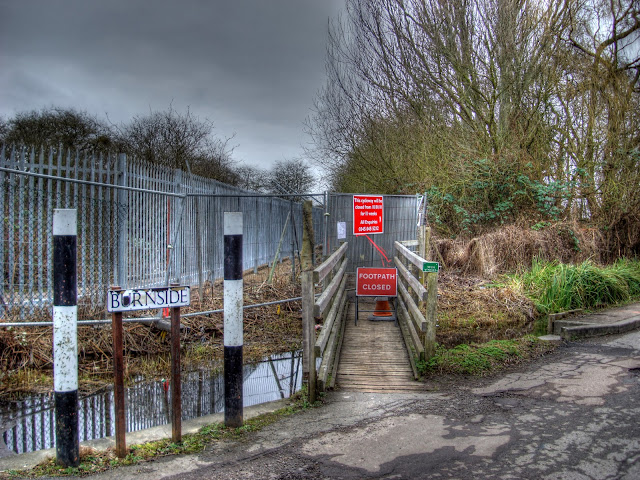 Instead of The Tins I headed along Burnside onto what I have always known as Snakey Path, and also appears on the OSM Cycle Map as Snakey Path. It heads towards Cherry Hinton following the (wiggly) line of Cherry Hinton Brook. In my mind this is less safe than The Tins, the path is narrow and there is not much of a verge before the brook. There appears to have been a fair bit of undergrowth clearance on the other side of the Brook though and it is lighter than I remember it. I passed three cyclists going the other way though and slowed down quite a lot. 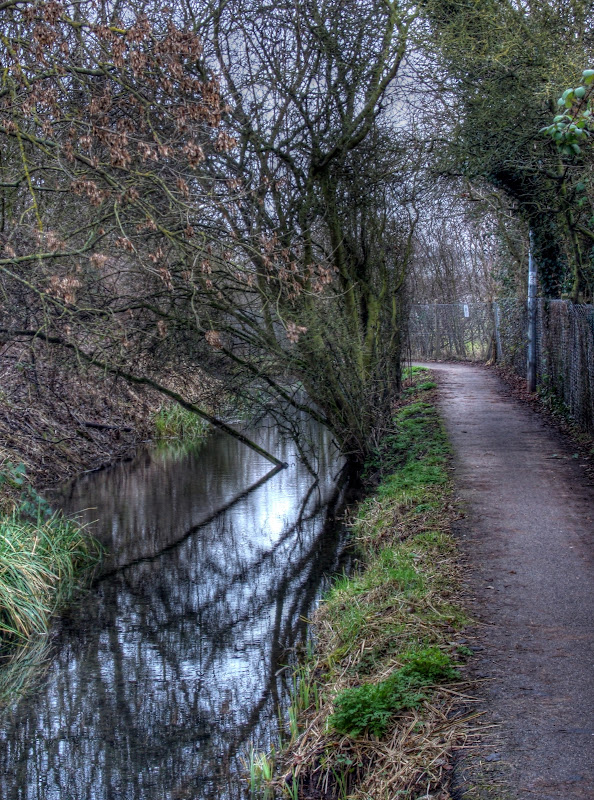 As I was in Cherry Hinton I carried on out through Fulbourn and the Wilbrahams before heading back to town. I did notice that the crossroads in Cherry Hinton still seem to be confusing drivers. It used to be that if you were heading out of town (the road on the right) towards Fulbourn (the road on the left) you took the right hand lane, along with those turning right. This is not normally how these junctions work. There were road markings though to indicate what drivers were supposed to do. After some road works (pothole filling I think) the road markings were lost along with an ASL on the road for bikes. This means that some drivers take the left lane to go straight on and some take the right lane - today it caused a bit of handbags at dawn with beeping by two drivers both thinking they were in the right.

Perhaps instead of worrying about cyclists near Addenbrookes (see yesterdays Post) the Council could sort this out.

I mentioned recently the decline in wild birds - apparently Crows and Magpies are to be trapped. Also Brompton owners better beware of cycling at inappropriate times. But you don't need to worry about "most speed cameras".

And finally - yesterday, tragically a cyclist was killed near Burwell (and Reach) in an accident with a motorbike, I hope the biker makes a good recovery.