Tis the season for snowdrops - well at least we have them coming out in our garden. I must get over to Anglesey Abbey which shows the season as being from the 24th of January to the 27th of February. Although obviously the weather plays a role in precisely when they will be out. Apparently in 2009 the snowdrops were two weeks late - the latest for a decade. Anglesey Abbey has an amazing collection of snowdrops (Galanthus). Apparently of of the more expensive snowdrops is Galanthus plicatus 'E.A. Bowles' which cost £150 for a single bulb, In 2008 someone paid £265 for G. nivalis 'Flocon de neige'.

It wasn't until it was rather too dark that I popped out to take any pictures of the ones in my garden so I am afraid this one picture is rather blurry and taken from a less than flattering angle. Still, they will last a while so I can pop out later in the week. I think I might take a tripod with me as well. 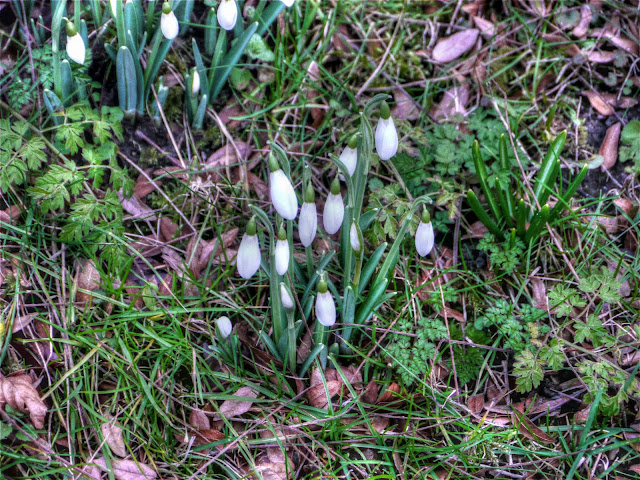 My Christmas present this year was a new lens for my camera. Instead of buying it from one of the usual suppliers I chose a cheaper supplier. It is a 100mm to 300mm lens for my Panasonic camera. Despite ordering it three weeks before Christmas it was "delayed" by all the snow and I had to chase them up to find out where it was. Then when it arrived (mid-January) the UV filter I had ordered at the same time, to protect the front of the lens, was delayed further. After chasing them up they then sent that the next day, so as a supplier they are responsive to emails, just not proactive in communicating what is going on. Anyway I now have it and have fitted it to my camera and being a compact lens the whole caboodle (camera and lens) nicely fits in my camera bag, which I sling over my shoulder when cycling.