Yet more cycling (yet fewer pictures)

Friday, 29th January: This week seems to have been dominated by meetings in Cambridge, which although often means a shorter cycle ride it does get me out cycling. Unlike the day before I allowed myself plenty of time today and was able to cycle at a more sedate pace. So I didn't arrive all hot and sweaty. Actually it felt very cold when I set off despite the sun and blue skies, so I found myself having to cycle a bit faster just to generate some warmth. It wasn't windy though which was good. A friend's three-year old did wonder, perhaps rather hopefully, whether they could go to the seaside for a paddle it was so sunny. I like that sort of optimistic thinking.

I also managed a bit of a detour route because I was early and popped up, almost, to Quy. On the way there were trees laden with Catkins and they seemed to glow in the sunlight - I took this picture on the way back into town, near where NCN51 crosses High Ditch Road. It reminds me of two things. The first catkins of the year were always put on display, in the little village school I attended as a boy and I think the pupil who brought them in was awarded a star, we had a red, silver and gold star system to help keep us motivated! The school only had about 60 kids in two classes so it wasn't unruly. Although in those days the ruler was use to maintain rule - a sharp rap across the hand was one of the punishments used. We did have one lad who couldn't settle and sometimes got tied to his chair with a skipping rope - it didn't work though.

The other thing catkins herald is Spring, along with the snowdrops that are popping up in the front garden. Unfortunately I have to remind myself that Spring can still be some way off. A point that was more obvious when I cycled home at the end of the day. I'd let my hands get cold before putting my gloves on and setting off - as a result it took ages for the tips of my thumbs to stop throbbing. 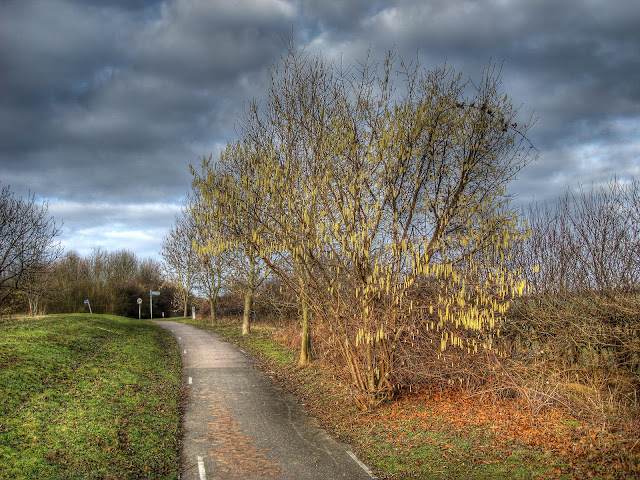 I prefer to cycle along dedicated cycle paths and out in the country. It is more peaceful and I can spend more time looking around rather than having to look out for traffic. It also seems that we cyclists are 'unaware of the risks of pollution'. Apparently we need to understand it so we can make informed choices about where and when we cycle. Humm, if you have to go to work you have to go to work and generally you don't want to go all around the houses wasting valuable sleeping time. I guess I would like to see more informed choices for drivers so that they don't drive and so create less pollution. It highlights not getting stuck behinds a bus as one way to reduce the impact of pollution on cyclists.

Personally I would like to see more dedicated, high quality cycle routes, but I also feel that a cyclists right to use the road should be jealously guarded. We are unlikely to see, in my lifetime, a dramatic increase in direct, accessible and plentiful cycle routes so we do need to ensure that cycling on roads is not discouraged. Drivers need to maintain their awareness of more vulnerable road users and expect to share the road equally with such users. A more detailed analysis of the idealogical issues can be seen on the Crap Cycling & Walking in Waltham Forest website.

One issue that I have been following is the Government's consultations on its (our) ownership of English forests. I do like to cycle through woodland and we have Thetford Forest on our doorstep here in Cambridge - it would be awful it the freedoms to walk, cycle and ride in such forests get curtailed. (After all we own them at the moment.)

And finally - here is one approach to the lack of parking many houses suffer from in cities. Although blaming a tailgater sounds a bit like an excuse for her boyfriend, who couldn't understand quite how she had done it.